Socioeconomic development is closely related to ecosystem changes. To avoid activities that have harmful effects on the environment, it is necessary to apply methods consistent with the policy of Sustainable Development (SD). Application of biowaste is compatible with the policy of sustainable development, sustainable agriculture, as well as sustainable food production, and it may contribute to the mitigation of climate changes by sequestering carbon in soil [1]. The key aim of SD is to obtain a balance between the exploitation of natural resources for economic development and protecting ecosystem services [2].

Biowastes are produced in large quantities worldwide by anthropogenic activities, but only about 25% of the total production is recycled. Figure 1 shows the recycling of biowaste per capita in European countries [3]. Due to their high content of organic matter, such biowastes may be used for energy production, soil amendments, and fertilizer, as well as for the immobilization of harmful and toxic trace elements in soils [4]. Biowastes, such as farmyard manure, improve nutrient availability either from the manure itself or through altering the soil’s geochemical properties [5], and it may lead to the improvement of good soil structure. Moreover, biowastes may effectively reduce the lability of harmful cations in soil by complexation or surface adsorption to carboxylic and phenolic acid groups. In addition, the co-precipitation to precipitants such as Fe and Al oxides used in the production provides metal-binding surfactants [6][7][8][9][10][11]. 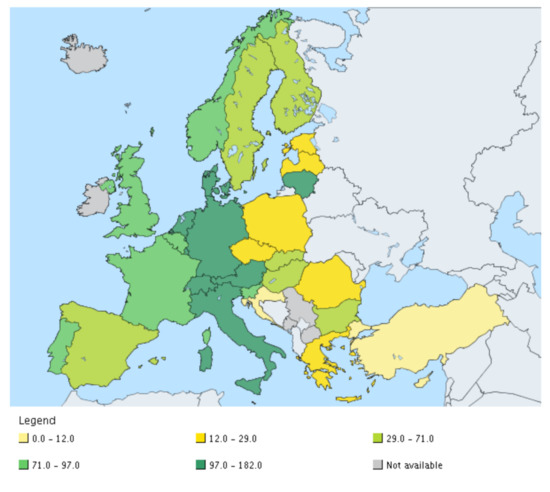 Figure 1. Recycling of biowaste (kg per capita) in different countries in 2017 provided by Eurostat [12].

Sewage sludge is the most commonly used biowaste in soil remediation practices. Sewage sludge (SS) is a by-product produced in biological wastewater treatment plants and usually makes up about 1–2% of the treated wastewater volume. Production of sewage sludge in 2015 in Poland was 568 Gg, whereas in Germany it was 1.82 Tg [13]. Such large quantities of SS create a problem for their utilization. Moreover, sewage sludge may be problematic in its recycling due to the presence of potentially hazardous trace elements [14]. The substrate of sewage sludge contains both organic and inorganic substances, including pathogens and toxic substances which pose a substantial ecological risk [13]. Sewage sludge also contains organic contaminants that create odors and hygiene concerns [15]. For this reason, sewage treatment systems are designed to stabilize and safely recycle biowaste and to reduce possible environmental risks [12][16]. Applied treatment methods are aimed to recover valuable organic matter fraction and reduction in produced wastes [17].

Figure 2. Share of different methods of disposal of sewage sludge in total disposal in selected European countries in 2015 [5].

Sewage sludge has a good fertilizer value due to its high nutrient content made available to plants during the growth period [20]. The sewage sludge is produced in large quantities globally and its amount is increasing year by year. For instance, in Poland, the yearly production of sewage sludge increased by 13% between the years 2006–2015, while in Bulgaria the increase was about 50% between 2006 and 2017. Large quantities of sewage sludge produced in Europe are either deposited or used for different purposes (Figure 2). For example, Germany in 2015 produced 180,299 Mg of sewage sludge, of which 99% was disposed of for agriculture use, landfill, compost, and other application [5].

Composting refers to the biological process in which organic matter is degraded under controlled aerobic conditions [21]. The product of composting is biologically stabilized material without the consumption and production of phytotoxic metabolites [21]. Different methods are available for composting, including windrows, aerated static piles, bunkers as well as in-vessel systems [22]. A majority of substrates for composting consists of agricultural wastes, agro-industrial wastes, and putrescible organic residues[23] . Composts consist of a uniform structure that is a valuable substrate for agriculture due to its organic origin containing particularly high amounts of phosphorus but also some nitrogen [23][24]. One of the most important advantages of composting when it comes to handling is the reduction in biowaste volume and moisture [25]. The anaerobic digestion of stabilized compost is an interesting treatment pathway, as biogas is produced during the digestion process [26].

In the literature, there are many interesting studies regarding compost enrichment with nutrients to improve compost quality as a soil amendment. For instance, since nitrogen is one of the most important inorganic nutrients, rice straw or coffee pulp was added to the compost feedstock in order to increase N content in the final product [27][28]. Moreover, potassium-rich feedstock (e.g., banana peels) were added to the compost feedstock to enhance K concentration in the final product [29].

In addition to ordinary compost, vermicompost, produced by short duration, viable and cost-effective technique with stabilized and oxidized biowaste can also be used. Vermicomposting is carried out both by microorganisms and earthworms [30]. Vermicompost is a peat-like material with a high concentration of organic and inorganic ingredients, and with large surface area, and high porosity. The application of vermicompost is shown to influence soil quality positively, among others, by an increase in organic matter content as well as permeability coefficient (PC) [31].

In addition to sewage sludge and compost mentioned above, animal manures, crop residues, and food wastes are also considered as biowastes. The name “waste” is closely related to the last step of processing but in agreement with the policy of sustainable development, they may consist a valuable primality product in other branches of industry. Animal manure is often used as organic fertilizer.

Biowaste from the wood processing industry is frequently combusted to wood ash which is used as a nutrient source in plantations and cultivated fields. The high content of micro- and macronutrients in wood ash makes it a valuable soil quality improver. Due to its alkaline properties, wood ash application results in raising soil pH [32]. It has also been reported that bioash can improve forest nutrient deficiency [33].

There are many studies regarding the change in soil properties after land application of organic waste. Land application of sewage sludge decreases the bulk density of the soil and increases its porosity [34][35]. Moreover, it also alters the aggregate associated organic carbon of soil by its significant increase [34]. In a previous study, it was observed that biowaste fertilization can increase the concentration of dissolved organic carbon and phenolic compounds [36]. Sewage sludge application can lead to an increase in the field capacity and wilting point, but they also found a decrease in the available water in the soil [37]. The effect of sewage sludge application on different soil parameters is shown in Table 1.

Table 1. Changes in soil properties caused by the application of various biowastes.

The application of compost to soil significantly increased the saturated hydraulic conductivity by up to 168.4% in clay soil [38]. Composts may also increase soil porosity, decrease bulk density, and improve soil chemical quality (pH, CEC, organic matter content) (Table 1) [38]. It was also observed that compost increases electron conductivity, the concentration of dissolved, and total organic carbon, and humic substances [39]. The addition of compost increased the SOC by 1.7 times, K by 5.5 times, and decreased N by 0.7 times in comparison to the control [40].

2.2. Impact on Biological and Biochemical Parameters

Basal respiration provides proper information about the microbial activity in the soil and it is a sensitive indicator for monitoring SOM mineralization [41]. García-Gil et al. [41] showed that sewage sludge soil amendment influenced the biological and biochemical parameters of soil positively via increase in microbial biomass, basal respiration, metabolic quotient (qCO2), and enzymatic activities (dehydrogenase, catalase, phosphatase, urease, protease, and β-Glu activity) after 9 months of semiarid soil treatment. Sewage sludge and compost application to soil improved microbial respiration [42][43]. They noticed an increase in CO2 emission at higher doses of sewage sludge (30 Mg ha−1). Moreover, biowaste is a valuable source of nutrients to stimulate microbial activity in the soil [43][44]. Therefore, compost application to the soil altered the structure of the bacterial community [38]. However, some organic wastes used as a soil amendment may contain a high concentration of toxic trace elements creating a huge threat to biocenosis. Thus, their entrance to soil should be carefully monitored to minimize environmental risk [45].

Organic wastes such as sewage sludge and compost may immobilize heavy metals in the soil [46][44]. Soil application of biowaste may significantly increase the microbial activity and strengthen the remediation process [47]. Hattab et al. [48] and Placek et al. [47] observed that composted sewage sludge decreased the mobility of Mo, Cr, and Co. Jaskulak et al. [49] showed that cattle manure, horse manure, and vermicompost contributed to the decrease in oxidative stress caused by heavy metal contamination. In their study, the addition of biowaste for the cultivation of white mustard (Sinapis alba), black locust (Robinia pseudoacacia), and yellow lupine (Lupinus luteus) contributed to the decrease in glutathione peroxidase activity and phenolic compounds resulting in a significant decrease in oxidative stress.

Biowaste may also immobilize polycyclic aromatic hydrocarbons (PAHs) in the soil and consequently reduce their bioavailability [50]. The increased microbial activity fuels the degradation of organic contaminants such as pyrene [51] and PAHs [52].

Moreno et al. [53] showed that biowastes addition to an arid soil increased and stabilized the dehydrogenase activity indicating higher total metabolic activity of soil microorganisms. Similarly, Meena et al. [54] showed a beneficial role of biowastes soil amendment on microbial biomass carbon (MBC) (up to 1.5 times in comparison to the control) and dehydrogenase activity (up to 2 times higher in comparison to control). It has been reported that the application of poultry manure, straw, alfalfa, and municipal solid waste compost benefited the MBC and dehydrogenase activity in the soil positively [55]. Similar, a positive increase in organic matter and a decrease in bulk density in degraded soils was noticed by Foley and Cooperband [56].