Several reports have shown that polymethoxylated flavones (PMFs) derived from citrus fruit, such as nobiletin, tangeretin, and 3,3′,4′,5,6,7,8-heptamethoxyflavone, are promising molecules for the prevention of neurodegenerative and neurological disorders. In various animal models, PMFs have been shown to have a neuroprotective effect and improve cognitive dysfunction with regard to neurological disorders by exerting favorable effects against their pathological features, including oxidative stress, neuroinflammation, neurodegeneration, and synaptic dysfunction as well as its related mechanisms.

The number of patients with neurodegenerative diseases and neurological disorders associated with dementia, such as Alzheimer’s disease (AD), Parkinson’s disease (PD), and cerebrovascular dementia, is increasing [1][2]. Currently, approximately 50 million people worldwide have dementia, and that number is expected to triple by 2050 [1][3]. Because AD is the most common form of neurodegenerative disease [1][4][5], the development of new treatments for AD is anticipated. The earliest pathological symptom of AD involves the accumulation of β-amyloid (Aβ) plaques in the brain [5][6]. Briefly, Aβ plaques reportedly start to form more than 20 years before the onset of AD symptoms [6]. About 10 years after the start of Aβ accumulation, tau hyperphosphorylation and aggregation lead to the formation of neurofibrillary tangles in the brain [6]. A few years later, mild cognitive impairment develops, and the onset of AD occurs several years after that [6]. Thus, the mechanism of AD onset is supported by the amyloid cascade hypothesis, which states that abnormal accumulation of Aβ is responsible for cognitive decline [6]. However, abnormal accumulation of Aβ/tau in the brain occurs long before AD onset, and thus far, no clinical trials have successfully treated patients after AD onset. Researchers have recently shown that neuroinflammation and oxidative stress in the brain play major roles in the development of AD [7][8]. Interestingly, Venegas et al. (2017) reported that the overactivation of microglia in the brain elicits an inflammatory response that triggers Aβ accumulation [9]. It has also been reported that age-induced oxidative stress promotes Aβ accumulation in the brain, which suggests that AD onset might be caused by neuroinflammation or oxidative stress that precedes plaque formation in the brain [10]. Furthermore, studies have reported that lifestyle-related diseases, such as diabetes, dyslipidemia, and obesity, increase the risk of developing AD [11][12][13]. Therefore, preventing neuroinflammation, oxidative stress, lifestyle-related diseases, and the accumulation of Aβ/tau in the brain is a promising strategy for the prevention and treatment of AD. Neurodegenerative diseases and neurologic disorders have some pathological similarities at the intracellular and molecular levels, including oxidative stress, inflammation, and cognitive decline [7][8][14]. It is widely accepted that oxidative stress and neuroinflammation contribute to the progression of not only AD but also other neurodegenerative and/or neurological disorders, such as PD, cerebrovascular dementia, epilepsy, and depression [2][14]. However, therapeutic agents for these diseases have not yet been elucidated. Consequently, the development of functional foods to prevent neurodegenerative diseases and neurological disorders is highly expected.

Numerous natural resources contain bioactive substances, which allows them to function as treatments and means of preventing geriatric and neurodegenerative diseases [14][15][16][17][18][19]. Citrus peels are a rich source of polymethoxylated flavones (PMFs) and have been widely used as a crude drug in traditional herbal medicines. The following compounds are major PMFs in citrus fruits (Figure 1): nobiletin (3′,4′,5,6,7,8-hexamethoxyflavone, C21H22O8), tangeretin (4′,5,6,7,8-pentamethoxyflavone, C20H20O7), and 3,3′,4′,5,6,7,8-heptamethoxyflavone (C22H24O9, HMF) [20]. Because of their anti-inflammatory and antioxidant effects, these citrus-derived PMFs have the potential to prevent neurodegenerative and neurological disorders [21][22][23][24][25][26]. In addition, these PMFs have shown beneficial effects against hyperlipidemia [27][28], obesity [29][30], diabetes [31][32], cardiovascular dysfunction [33][34], and cancer [35][36][37]. In this study, we focus on the neuroprotective and ameliorative effects of citrus-derived PMFs, nobiletin, tangeretin, and HMF, against central nervous system dysfunction in several rat and murine models of central nervous system disorders and related diseases as well as their mechanisms of action. 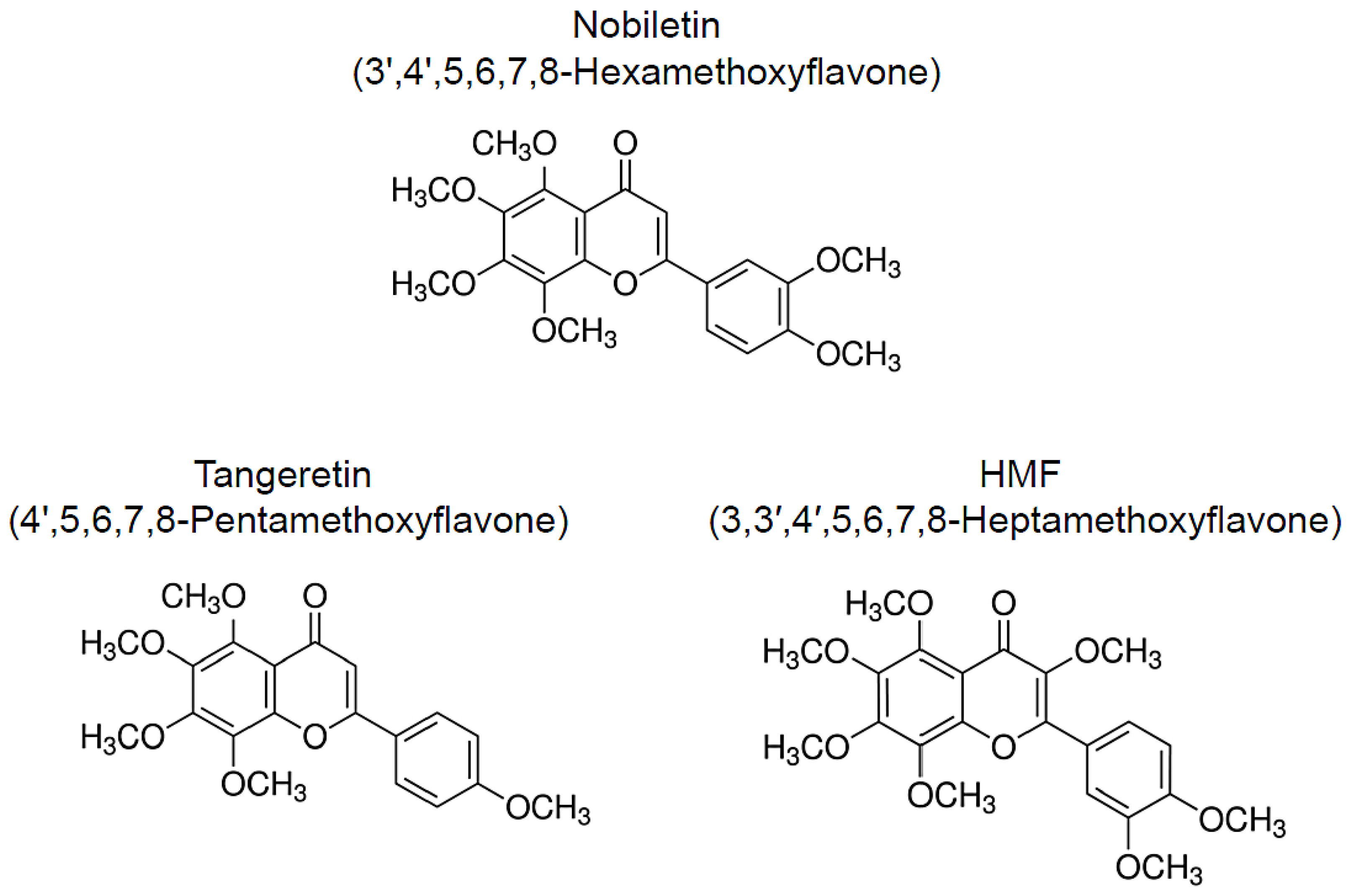 PMFs significantly prevent and/or improve cognitive dysfunction and motor dysfunction in animal models. These action mechanisms involve diverse functions, such as antioxidant effects, anti-inflammatory effects, inhibition of Aβ pathology, suppression of neurodegeneration and neuronal cell death, regulation of neurotrophic signals and synaptic plasticity (Figure 2). Furthermore, citrus PMFs exert antidementia effects after oral, subcutaneous and intraperitoneal administration in animal models of neurodegenerative diseases and neuronal disorders. Nobiletin, tangeretin, HMF, and its bioactive metabolites can also cross the blood–brain barrier [150][38][39]. PMFs are generally quite safe, which is a major advantage. It has been shown that chronic administration of the extract of Citrus reticulata Blanco, Citrus reticulata or Citrus sinensis, which contain high concentrations of PMFs, have no harmful effects on animals [40][41], and humans [42][43].

Citrus peels and/or extract have been reported to have various beneficial effects on humans, e.g., body weight control [43], promote cardiovascular health [44], improve hepatic steatosis [45] and cancer prevention [46][47]. Although consisting of only a few cases, one clinical study has demonstrated that PMF-rich citrus peel extract prevents the progression of cognitive dysfunction in AD patients on donepezil therapy [48]. Based on this evidence, it is important to develop functional foods or drugs that could prevent or ameliorate central nervous system disorders.

The three types of PMFs exerted neuroprotective and neurotrophic effects in various experimental models. These natural compounds share common mechanisms such as antioxidant and anti-inflammatory effects. The antioxidant and anti-inflammatory effects of PMFs may be an important mechanism of neuroprotective effect in various neurological models. On the other hand, PMFs seem to activate neural function through activation of several intracellular signal cascade and gene expression. Therefore, structure-activity relationship studies may be needed in order to understand the precise mechanism of action of the neuroprotective effects of PMFs.

We further mention herein the facts that there is one exciting discovery of PMFs’ function which deserve additional discussion. Circadian rhythms are biological activity rhythm driven by internal circadian clocks and are a fundamental mechanism to regulate various pathways and pathophysiology [49]. Circadian disruption induces the development of numerous diseases, including obesity, metabolic syndrome, neuroinflammation and cognitive impairment [49][50][51]. In addition, disruption of circadian rhythms is a common occurrence in elderly individuals, and is more severe in patients with neurodegenerative diseases, such as AD and PD [50][51]. Interestingly, nobiletin, and to a certain degree also tangeretin, has been reported to activate circadian rhythms, and confer protection against metabolic disease, aging and delirium [52][53][54][55][56][57]. The regulation of circadian rhythms by PMFs may partly be involved in the improvement of neuronal function in several neurological disease model animals.