Dicarbonyl compounds, including methylglyoxal (MGO) and glyoxal (GO), are mainly formed as byproducts of glucose metabolism. The main glyoxalase system consists of glyoxalase I and II (Glo1 and Glo2) and is the main enzyme involved in the detoxification of dicarbonyl stress, which occurs as an accumulation of MGO or GO due to decreased activity or expression of Glo1. Dicarbonyl stress is a major cause of cellular and tissue dysfunction that causes various health issues, including diabetes, aging, and cancer.

The skin is the largest organ in the body and is the first line of defense against pathogens or environmental changes. The mammalian skin comprises two main layers: dermis and epidermis. The dermis layers consist of fibroblast cells and extracellular matrix, whereas the epidermis layer is the outermost layer of the skin tissue, and through the basement membrane, it connects to the dermis. Keratinocytes are the main epidermal cells and are responsible for renewing tissues. There are some enzymes involved in glucose and glycogen metabolism in the skin epidermis. Among them, glyoxalase is present in epidermal keratinocytes and dermal fibroblasts, and plays a crucial role in skin homeostasis [1].

The glyoxalase system consists of two intracellular enzymes, glyoxalase I (Glo1) and II (Glo2) (Scheme 1). It was independently discovered by Dakin and Dudley and Neuberg in 1913. Glo1 uses L-glutathione (GSH) as a cofactor and catalyzes the conversion of α-oxoaldehydes such MGO into corresponding hemithioacetal S-d-lactoylglutathione. Glo2 catalyzes the hydrolysis of S-d-lactoylglutathione to D-lactate with the regeneration of GSH, which is consumed in the Glo1 catalyzed reaction. Thus, Glo1 is the rate-limiting step of this series of reactions. Glyoxalase enzymes are present in the cytosol of the cell and are ubiquitously found in all animals. Recently, glyoxalase III (Glo3) was discovered in Escherichia coli and it converts MGO to lactic acid in the absence of any cofactor. Interestingly, it has been reported that it belongs to the DJ-1 superfamily proteins, which are involved in Parkinson’s disease and oxidative stress. Glo3 dysfunction may sensitize cells to oxidative stress and induce mitochondrial dysfunction such as DJ-1 [2][3]. 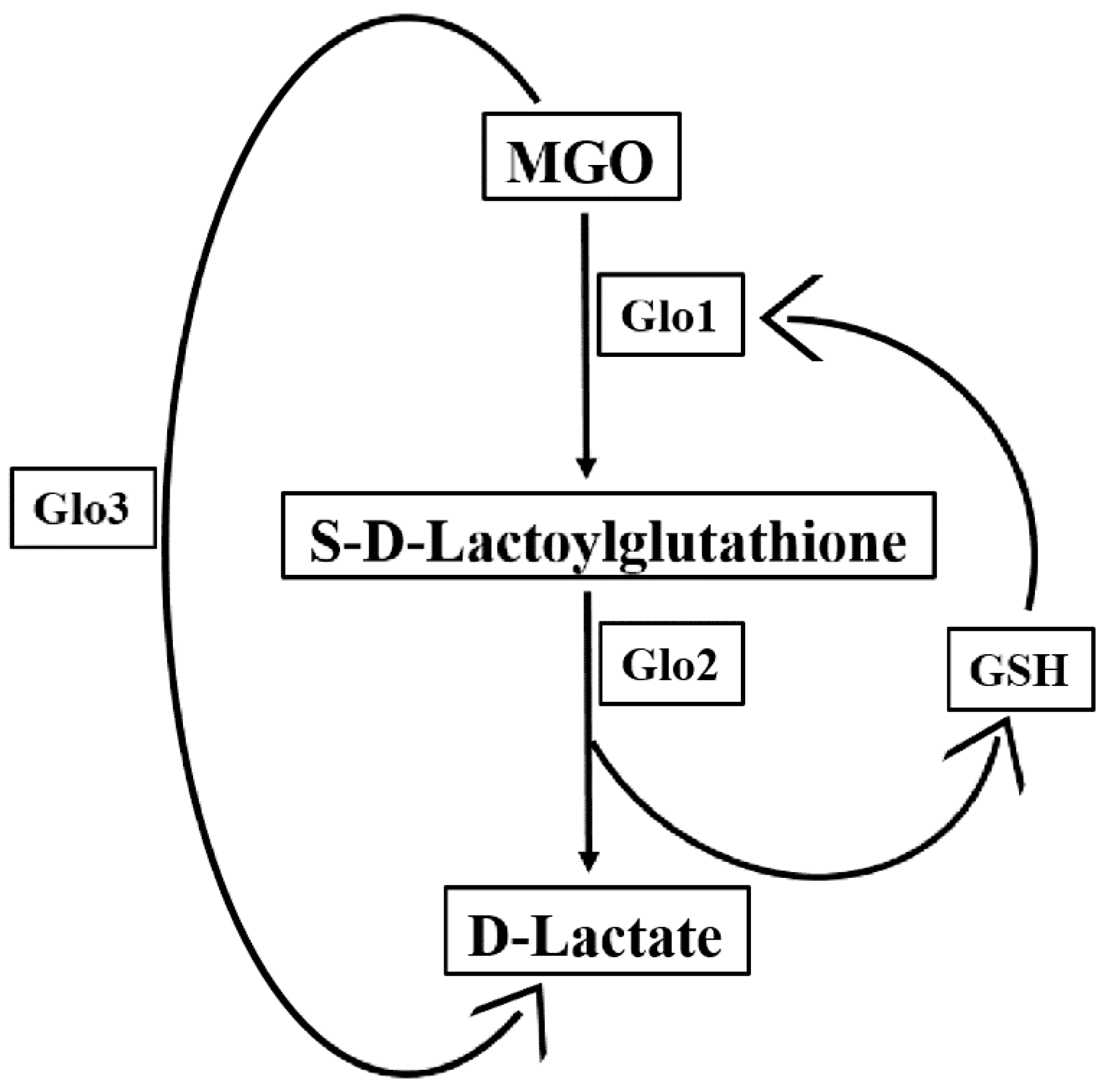 2. Glyoxalase System in the Progression of Skin Aging and Skin Malignancies

The glyoxalase system plays an important role in suppressing dicarbonyl stress and maintaining the dicarbonyl metabolites at low tolerable levels, preventing protein and cellular dysfunction. Therefore, both Glo1 and Glo2 may be a powerful preventive system in the body, particularly through detoxifying harmful dicarbonyl stress produced as a result of glucose metabolism and sun exposure in the skin. Figure 1 represents the role of glyoxalase in skin aging and skin cancer. During skin aging, both chronological and photoaging, the expression and activity of glyoxalase is greatly reduced, which leads to the accumulation of MGO and causes oxidative damage to the skin. This accumulation of MGO also impairs and delays the wound healing process. The glyoxalase system plays an important role in skin aging and protects the skin against dicarbonyl stress and oxidative damage. Thus, glyoxalase inducers or MGO scavengers may play an important role in delaying skin aging and improving the wound healing process. Although the role of glyoxalase has been studied broadly in skin aging, its role in skin pigmentation and other skin abnormalities such as psoriasis, vitiligo, and AD still needs to be studied and explored. Future studies on the role of glyoxalase in skin pigmentation and other skin abnormalities might reveal the role of this protein in various skin disorders. Hence, it is highly recommended in the future to explore the role of glyoxalase in various skin disorders. Due to the high expression of Glo1 in skin malignancies, Glo1 has become a novel target for the development of drugs against skin cancer. Further research on glyoxalase both in in vivo and clinical studies in skin carcinogenesis might reveal interesting roles of these proteins in skin cancer, and more efforts are also needed to develop potential glyoxalase regulators to reduce skin abnormalities, including skin aging and skin melanoma. 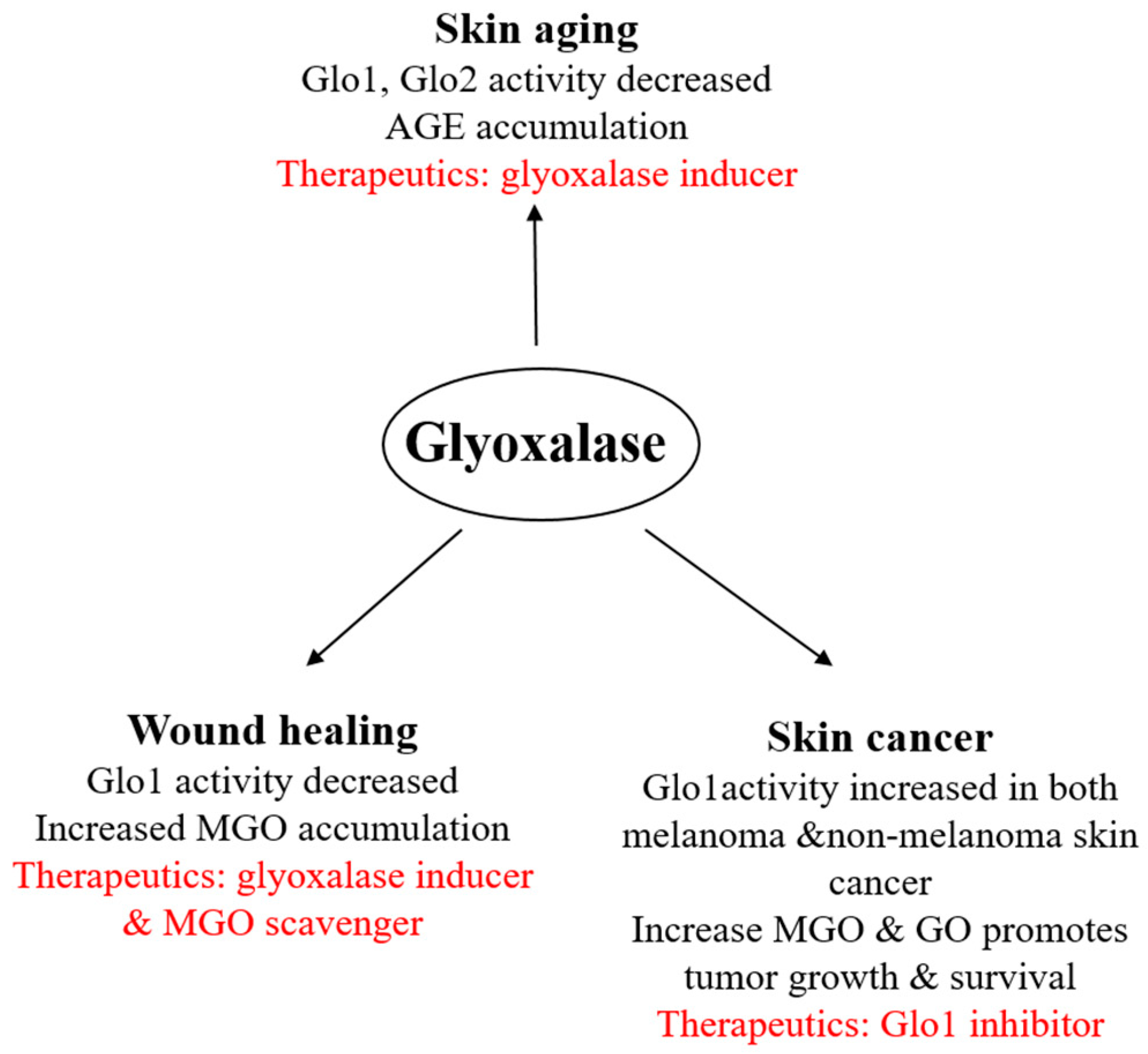 Figure 1. Schematic representation of the glyoxalase system in skin aging, skin cancer and other skin abnormalities. Glyoxalase activity (Glo1 and Glo2) is reduced in skin aging and age-related wound healing with the accumulation of MGO, GO and AGE, while Glo1 activity is highly expressed in both melanoma and non-melanoma skin cancer. With the increase in Glo1, intracellular MGO and GO are detoxified, promoting tumor growth and survival. Glyoxalase regulators are potential therapeutic agents to reduce skin abnormalities. The role of glyoxalase in other skin abnormalities such as hyperpigmentation, psoriasis, vitiligo, atopic dermatitis etc., and Glo2 in skin cancer, has not yet been investigated. Glo1, glyoxalase I; Glo2, glyoxalase II, MGO, methylglyoxal; GO, glyoxal.