Phytate is a six-fold dihydrogenphosphate ester of myo‑inositol or cis-1,2,3,5-trans-4,6-cyclohexanehexol which is the most abundant of nine possible isomers of inositol (Ins). Myo-orientation is also found in the case of phytic acid, which is due to the fact that the maximal number (i.e., five out of six) of phosphate groups are present in thermodynamically stabilized equatorial position. However, the molecule can be inverted from equatorial (1a5e) to the axial (5a1e) orientation between pH 9.0 and pH 9.5.

Phytate (InsP6) represents a deprotonated (salt) form of dodecaprotic phytic acid (Figure 1) which can also be found in the literature by other names, including the commonly used inositol hexakisphosphate (generally abbreviated as InsP6, IP6), 1,2,3,4,5,6-hexakis(dihydrogenphosphate) myo-inositol, or by the following IUPAC name; (1s,2R,3R,4r,5S,6S)-cyclohexane-1,2,3,4,5,6-hexayl hexakis(dihydrogen (phosphate)). 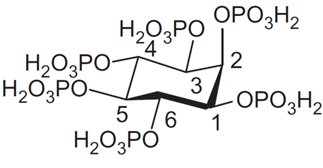 Because of the structural, chemical and physical properties, phytates can be found in many biological systems; including most of plant and mammalian cells [1] . In nature they exist mostly in the form of calcium–magnesium–potassium mixed salts, also known by the term phytins [2]. The highest content of phytates were found in plant seeds and grains (e.g., cereals, legumes, and nuts [3]) as the main source of inositol and phosphorous (typically accounting for 60–90% of total P) [4], as well as an important storage of cations (in the form of phytate salts) and high‑energy phosphoryl groups [5] . Although the biological role of phytic acid in the animal cells has not been fully explained, it has been shown to serve several important physiological functions; including antioxidant activity [6], cell signalling [7], and regulation of different intracellular processes [8].

Particularly in the case of (vegetarian) diets based on the plant products, such as wheats and legumes that are very frequent in developing countries, phytates can play an important role in nutrition. Numerous publications regarding their antinutritional effects can be found in the literature due to their strong binding interactions with essential minerals, such as Ca2+, Mg2+, Zn2+, Fe2+, Fe3+, Cu2+, and Mn2+ [9], proteins, carbohydrates and lipids [10]. This is mostly due to the electrostatic interactions which arise from the (partial) deprotonation of phytic acid in the wide range of pH and consequent negative charge of phytate anion in the range from −1 to −12 [11]. Formation of (un)soluble coordination compounds decreases the bioavailability of minerals in food and hinders their absorption [12]. Phytates can also form unspecific complexes with some proteins and therefore change their solubility and enzymatic activity [13], inhibit carbohydrate metabolism [14] , whereas the formation of lipophytic products leads to formation of metallic soaps and decreased lipid bioavailability [15]. Because humans and most of animals (except ruminants [16]) are not able to digest phytic acid, phytase is added into animal food [17], while specific microorganism, which synthesize this enzyme, are used in the case of human nutrition [18]. Phytases catalyze the hydrolysis of phytic acid (InsP6) which is dephosphorylated to lower myo-inositol phosphates (represented as InsPx, x < 6), namely: myo-inositol pentakis- (InsP5), tetrakis- (InsP4), tris- (InsP3), bis- (InsP2), monophosphate (InsP1), and in certain cases to the final product myo-inositol (Ins), leading to weaker interaction with nutrients and decreased antinutritional activity [19]. However, non-enzymatic hydrolysis can also take place when food is heated (e.g., autoclaving, canning) or treated with strong acid. However, phytic acid also functions as a precursor of inositol pyrophosphates (x > 6), such as InsP7 and InsP8, in which the fully phosphorylated InsP6 ring is further phosphorylated to create molecules that contain one or more high-energy pyrophosphate bonds [20].

On the other hand, strong interactions with heavy metals [21], particularly with iron and copper ions [11], exhibit also an antioxidant [22] and anticancer effects [23] of phytates alone or in combination with other inositol phosphates as reviewed by Vučenik and Shamsuddin [24] (2006). A specific coordination site between phosphate groups 1, 2, and 3 (see Figure 1) causes a significant negative shift of reversible redox potential of the redox couple Fe2+/Fe3+ [25] and even more importantly the removal of all available (six) coordination sites of iron, and therefore completely inhibiting its ability to catalyze Fenton reaction and hydroxyl radical (•OH) formation [26]. As a result, there are many studies of therapeutic or other beneficial effects of phytic acid as a dietary agent [24]. Moreover, phytates exhibit also a number of other beneficial effects on human health, such as inhibition of kidney stone formation [27] and reducing the risk of cardiovascular diseases by lowering of serum cholesterol level.

The first (original) analytical method for the determination of phytic acid content in cereals was developed in 1914 by Heubner and Stadler, which was based on the extraction of finely ground grain particles by HCl and titration of the extract with acidic solution of FeCl3 in the presence of ammonium thiocyanate. Phytate forms white precipitate with Fe3+ ions, while the titration endpoint is observed by the appearance of red-colored iron(III) thiocyanate complex. To overcome difficulties with the endpoint recognition, improvements of the original method were introduced in the following years by Rather [28] (1917), Averill and King [29] (1926), and Harris and Mosher [30] (1934) implementing modifications into direction of total phosphorous assay and/or quantification of precipitated iron. As an example of an early classical analysis of phytic acid from this period is worth mentioning the publication of McCance and Widdowson [31] (1935) who used the approach based on the extraction of dried food samples with HCl, filtration, and neutralization with NaOH to prepare the sample solution which was precipitated with FeCl3. The precipitate was then separated from the heterogenous mixture by filtration and upon the addition of NaOH and heating, the iron(III) was transferred from the initial phytate complex to Fe(OH)3 precipitate, while the released phytate solution was hydrolyzed by Kjeldahl wet digestion method and used for the colorimetric determination of orthophosphate according to the procedure of Briggs [32] (1922) based on the molybdenum blue reaction [33]. The procedure was used for the assay of phytic phosphorous in different foodstuffs and its absorption in humans, but it was later replaced due to the tedious and time-consuming procedure.

A faster assay can be achieved by an indirect method, where phytate is again firstly precipitated with heating in the acidic solution of a known iron(III) content and secondly the excess of iron is determined by back titration. An additional improvement of the method, as originally described by Young [34] (1936), is colorimetrical determination of iron 2,2′-bipyridine complex at 519 nm in order to determine the decreased iron in the supernatant which is proportional to the phytic acid content. A similar approach was later used for the analysis of phytate in soya-based vegetable protein by Davies and Reid [35] (1979) and in cereal and cereal products by Haug and Lantzsch [36] (1983) with modifications of previously described procedure of Holt [37] (1955). As reported by Reeves et al. [38] (1979) thorium(IV) has also been used for the titrimetric assay of phytate as an additional reagent to the commonly used iron(III). As discussed in the following paragraphs, the use of the first chromatographic methods began in the same period, however the precipitation methods were still more convenient for the routine (food) analysis, although the chromatography showed better accuracy as discussed also by Thompson and Erdman [39] (1982) who investigated the comparison between both methods for determination of phytate in soybeans.

In general, precipitation reaction of phytic acid is not dependable and shows difficulties for analytical applications due to the following main reasons. (i) The first and most important issue is an inconsistent stoichiometric ratio between iron(III) and phytic acid in the precipitate, which depends strongly on the pH, ionic strength and the presence of other multivalent metals, such as Ca2+, exhibiting a synergistic effect on the amount of the precipitate formed [39]. (ii) The second problem is the non-selectivity as the titrimetric methods do not allow to distinguish between phytate and its dephosphorylated analogues (InsP5–InsP1) and/or inorganic (poly)phosphates which can also form insoluble precipitates with Fe3+ ions and thus cause overestimations. (iii) Finally, for these kind of (classical) titration procedures very large quantities of the dried biological material (e.g., plants or seeds) are required for reasonable titrant consumptions. Due to these fundamental problems of precipitation-based techniques, the results from this period should be considered carefully, particularly in the case of analysis of food samples which are rich in both the multivalent metals and phytate hydrolysis products, i.e., InsP5–InsP1 and “free” orthophosphate. Additional information regarding the development of early methods for phytic acid determination in foodstuffs can be also found in the review of Xu et al. [40] (1992).

With the development of advanced computational data analysis (around year 2000), titrimetric methods have been extensively applied also for the investigation of phytate acid-base properties as well as its interactions with multivalent metal ions, resulting in numerous publications of protonation and complex stability constants, collected in the reviews of Torres et al. [9] (2005) and Crea et al. [41] (2007). Due to the uncertainty of phytic acid concentration, which can arise because of the insufficient purity of commercially available phytate salts (< 95%) and/or fast moisture sorption, the use of accurate analytical methods requires a particular attention to the precise standardization of phytic acid prior to its use as a standard and/or for the calibration of the method. This can be achieved by potentiometric titration using an one-point determination as described by Luján and Tong [42] (2015). However, due to the problematic determination of the initial phytate protonation level which can lead to higher experimental errors, the differential (two-point) alkalimetric determination, introduced by Marolt and Pihlar [43] (2015), proved as a reliable standardization procedure of phytic acid (Figure 2). The method was later applied in the study of the phytate complexation with monovalent and divalent metals by Marolt et al. [11] (2020) and for the investigation of the removal of dissolved organic phosphorous (in the form of phytate) from wastewaters by Petzoldt et al. [44] (2020).

Figure 2. (a) Titration curve of 0.3081 mmol of phytic acid in 1.0 M NaCl with 0.0996 M NaOH, accompanied by the corresponding derivative ∂pH/∂n(NaOH). Equivalent points (three in total) are indicated as EP1, EP2, and EP3, and correspond to the 6th, 8th, and 12th deprotonation step, respectively. (b) Calibration curve based on the linear dependance of the difference between the titrant consumption at first (EP1) and second (EP2) equivalent point (∆n(EP2–EP1)) on the number of moles of titrated phytic acid (nPhy). The differential method allows for a reliable standardization of phytic acid regardless on the initial protonation level of phytate. The calculation of phytate amount can be performed also by using other pairs of equivalent points, e.g., EP1–EP3 or EP2–EP3. Adopted from [43].