Additive manufacturing with an emphasis on 3D printing has recently become popular due to its exceptional advantages over conventional manufacturing processes. However, 3D printing process parameters are challenging to optimize, as they influence the properties and usage time of printed parts. Therefore, it is a complex task to develop a correlation between process parameters and printed parts’ properties via traditional optimization methods. A machine-learning technique was recently validated to carry out intricate pattern identification and develop a deterministic relationship, eliminating the need to develop and solve physical models. In machine learning, artificial neural network (ANN) is the most widely utilized model, owing to its capability to solve large datasets and strong computational supremacy.

Three-dimensional (3D) printing, under additive manufacturing, is a new, promising field that has gained prevalent attention in all fields [1][2][3][4]. It involves layer-by-layer deposition via a computer-aided design (CAD) model. 3D printing has several advantages: (a) it can produce parts with complex shapes, which are difficult to produce using conventional manufacturing processes; (b) it can manufacture parts with novel characteristics [5]; and (c) it decreases the material surplus, reducing the manufacturing cost. These are the reasons why 3D printing has become popular in a very short timeframe. However, 3D-printed parts also contain defects that are very different from those generated by conventional methods. There are various types of defects, including porosity, anisotropy in the microstructure, and part distortion, resulting from high residual stresses due to rapid heating and slow conduction [6]. Hence, it is essential to understand the correlation among the material metallurgical characteristics, printing parameters, microstructure, and properties of 3D-printed parts. There are various essential parameters, e.g., laser power, laser scanning speed, hatch distance between two adjacent layers, powder flow rate, etc., which influence the properties of the final produced parts. Inappropriately, the link between process parameters and the quality of the printed part is very complex and therefore difficult to understand.

Various data-driven models, known as machine learning, have been adopted widely in the domain of 3D printing. The main advantage of such models is that there is no need to develop a long list of multi-physics equations. Instead, they automatically learn the correlation between the inputs and outputs based on the data provided for training. In machine learning, artificial neural network (ANN) is the most commonly used algorithm and is under continuous development due to the availability of enormous databases and computational resources [7]. For instance, ANNs are continuously evolving in the fields of machine vision [8], vocal recognition [9], language processing [10], and self-governing driving [11]. Moreover, there is a new trend for implementing ANN in the 3D printing field.

2. Applications of ANN in 3D Printing

Process monitoring via various sensors, during the printing process, usually provides direct information w.r.t quality supervision and control. Three types of data sources can be identified as: (a) one-dimensional, such as spectra; (b) two-dimensional, such as graphs and images; and (c) three-dimensional, such as morphologies [12]. One-dimensional data can be processed faster but provide less information compared to two- and three-dimensional data. Shevchik et al. [13][14] investigated the possibility to use acoustic emission to monitor quality by combining the acoustic emission sensor with the ANN. Figure 1 shows a schematic of the workflow used to monitor the quality during the printing process.

Figure 1. Schematic of the workflow used to monitor the quality during the printing process; based on the data from [13][14].

A fiber Bragg grating sensor was used to record the signals during the selective laser melting process. Low-, medium-, and best-quality parts were intentionally produced by process parameters tuning. The singles obtained were classified for training and testing. The convolutional ANN was used for this purpose. The inputs of this model were narrow frequency bands, while the outputs were the classification of the printed part of high, medium, or low quality. It was found that the convolutional ANN can give a result with accuracies of 83, 85, and 89% for high-, medium-, and poor-quality workpieces, respectively, as shown in Figure 2. 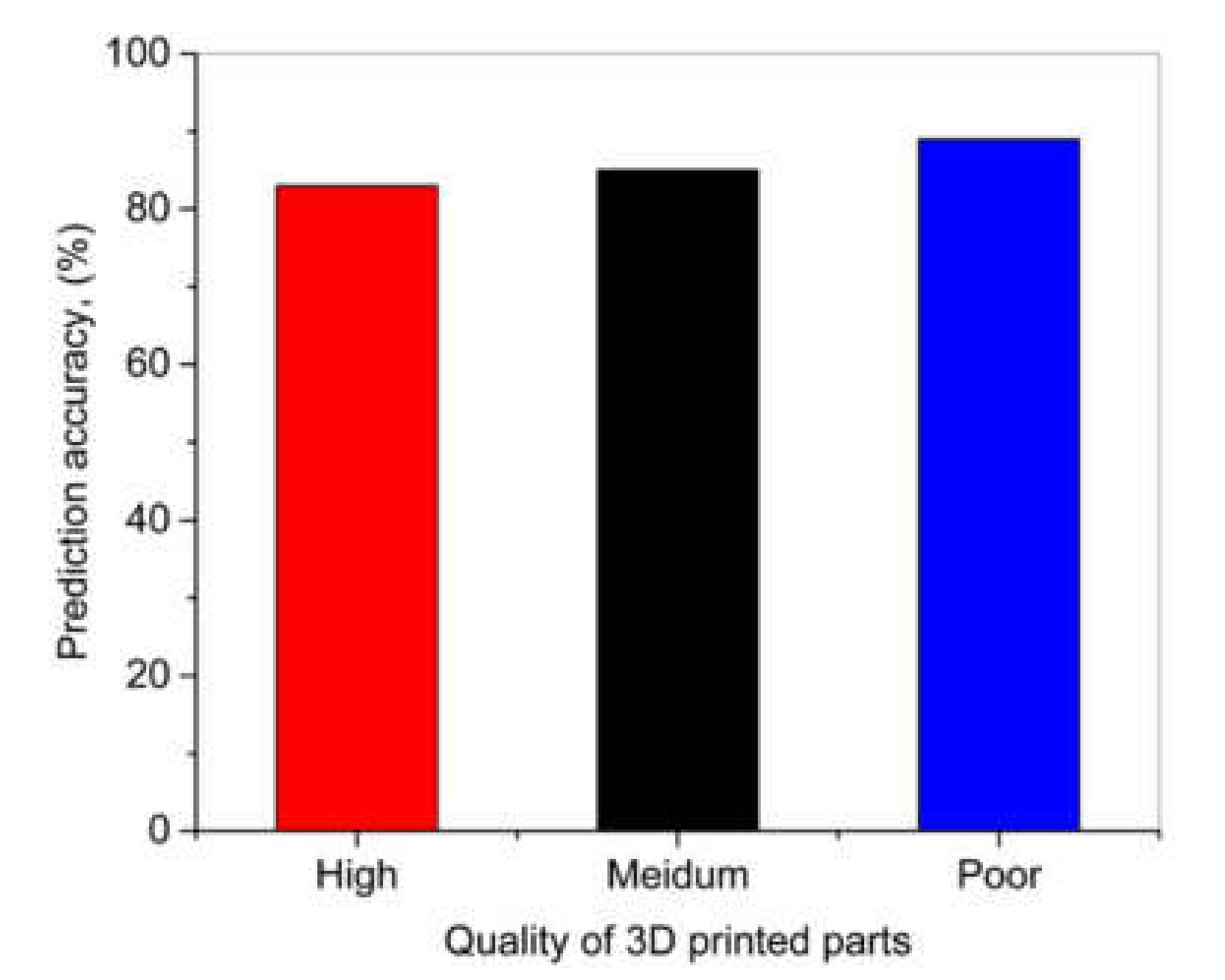 Figure 2. Prediction accuracy for high-, medium-, and poor-quality 3D-printed parts; based on the data from [13][14].

Zhang et al. [15] used a high-speed camera for the collection of process images. This system can also be called a visual system. This setup was able to collect three pieces of information: (a) melt-pool, (b) plasma plume, and (c) spatter formation. The features were sensibly taken out from the images after feeding them into a conventional ML algorithm. The algorithm proposed by the authors is presented in Figure 3. Further, the authors observed that even though the convolutional ANN model does not need a feature extraction step, it still can predict results with 92.7% accuracy. It makes convolutional ANN a potential candidate for real-time monitoring in the 3D printing process.

Figure 3. Schematic used by Zhang et al. [15] to train a convolutional ANN based on the image processing technique.

The detection of flaws through human-created, condition-based algorithms requires an in-depth understanding of the printing process as well as computer vision knowledge. Such condition-based algorithms are more restrictive; new algorithms have to be generated when new materials become available or when new part geometries are introduced, as this method needs to consider the interactions between various parameters. The reliance on the human operator makes condition-based algorithms less practical. ANN allows anomaly detection through a large dataset of good printing samples and bad printing samples, and the detection capability can be improved by adding new training data. As most in situ monitoring use cameras to acquire information about the printing condition, defect detection relies heavily on the capability of computer vision (CV). The most used ANN technique in computer vision is CANN, although other techniques have been used as well. For instance, Scime and Beuth [16][17] used scale-invariant feature transform (SIFT) to extract melt-pool features. They adopted various feature extraction techniques such as a bag of words (BOW) or histogram of oriented gradients (HOG) clustering to extract useful features from images and feature vectors. The feature vector was then fed to the SVM image classification algorithm to learn the defects, such as under-melting, key-holing, and balling [18]. They also attempted to use ANN techniques with CV to detect anomalies such as re-coater hopping and streaking, debris, superelevation, part failure, and incomplete powder spreading. Although the ANN algorithm can predict no anomalies with 100% accuracy, the algorithm was not able to predict re-coater streaking with high accuracy (50.6%). They compared the BOW technique with multiscale CANN (MCANN) and found that MCANN can achieve higher classification accuracies, though it is more computationally expensive (75% slower). Self-organizing error-driven ANN (SEANN), a combination of SOM and ANN, is found to be more accurate in classifying porosity defects than a k-nearest neighbor (KNN) algorithm and multilayer perceptron (MLP) [19]. Ye et al. [20] used a deep belief algorithm that consisted of stacking-restricted Boltzmann machines (RBMs), which had undirected connections between its top two layers and directed connections between all following adjacent layers, classifying the plume and spatter with minimum pre-processing and no feature extraction. The deep belief algorithm could achieve an 83.4% accuracy. In another work, to extract melt-pool, plume, and splatter data, CANN (92.7%) was found to have higher classification accuracy compared to SVM (89.6%) and the combination of SVM and principal component analysis (PCA) (90.1%) [15].

Design is an important research topic that requires a comprehensive understanding of the capabilities and limitations of 3D printing techniques. It is the first and critical step in the process workflow. A good CAD model design would not only ensure the printability but would also reduce the amount of support material when needed. However, the design process is normally iterative and time-consuming. A data-driven design for 3D printing would help designers in the design process. Maidin et al. [21] showed that the design feature database provided ideas and design features for less-experienced designers. The use of the ANN technique in 3D printing enables feature recommendations to existing CAD models, helping the designers to speed up the decision-making process during the design stage. For instance, Yao et al. [22] conceived a hybrid ANN algorithm, which used hierarchical clustering to classify 3D printing design features and a support vector machine (SVM) to enhance the hierarchical clustering results in the pursuit of the recommended design features. It helped inexperienced designers new to 3D printing to determine suitable design features for remote-controlled car components without actual physical trials and errors. Apart from that, ANN algorithms have been used for the feature recognition of CAD models and the manufacturability analysis of 3D printing. Heat kernel signature and the multiscale clustering method were used by Shi et al. to detect possible design faults in a particular CAD model [23]. A double-layered extreme ANN (DLEANN) was used by Zhang et al. to determine ideal print orientation to avoid putting support structures on user-preferred features [24]. In this DLEANN, the first layer was the classification to evaluate the relative score between the various part orientations, and the second layer was the regression to construct a global score for all printing directions. It was found to be able to identify the best printing directions with minimum visual artifacts due to support removal. Williams et al. [25] optimized the build orientation, and CANN was found to be better in terms of accuracy and consistency at predicting build time and part mass than the baseline linear regression model. Advancements in numerical simulations have allowed CAD models to be evaluated digitally before they are fabricated and tested physically, reducing the cost and time spent in experiments. However, numerical simulations can be computationally costly and time-consuming with complex processes, making online monitoring of the printing processes not feasible. Data-driven models have potential in predicting the final properties of the printed parts. Khadilkar et al. [26] used a deep-learning-based (DL) ANN framework to estimate stress distribution on the cured layer from selective laser sintering in almost real-time. In this attempt, a 3D model database that contained a wide range of geometric features was firstly generated. FE simulations on the 16,700 3D-printed models were then used to generate data labels to train the DL-ANN. They found that a two-stream CANN outperforms a single-stream CANN and ANN. Despite this, Koeppe et al. [27] used ANN to learn a parameterized mechanical model of cellular lattice structures, which includes their linear elastoplastic mechanical behavior to predict maximum von Mises and equivalent principal stresses in the struts and joints (Figure 4). The data-driven stress prediction took about 0.47 s, which was significantly shorter in comparison with the FE simulation, which took 5–10 h. The trained ANN models can potentially be incorporated into existing FE simulation frameworks to simulate the structural performance of larger parts of various scales. 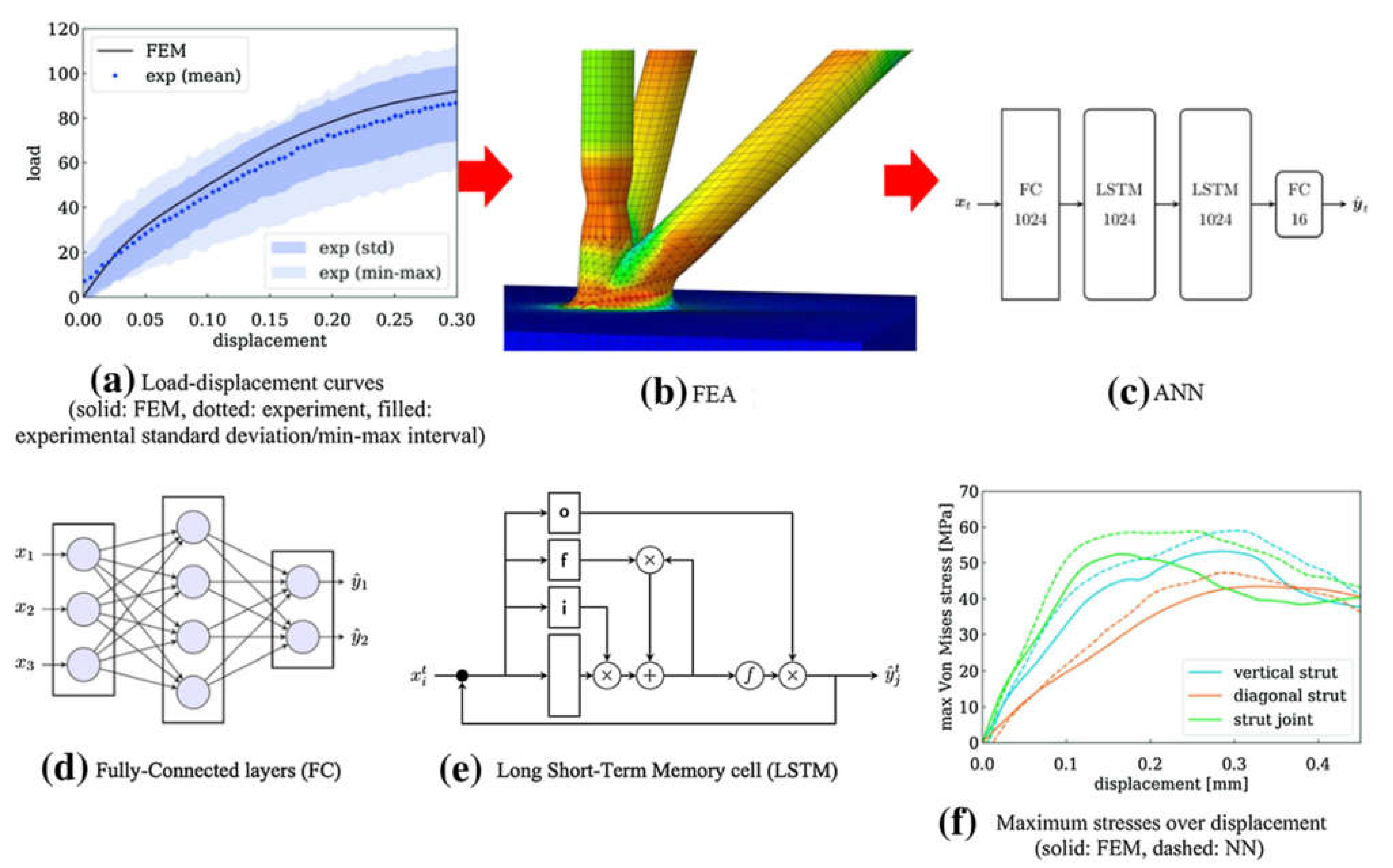 Chowdhury and Sam [28] explained that ANN algorithms could learn the thermal deformation of 3D printing processes and provide appropriate geometric compensation to the models for printing. Meng et al. [29] used 3D printing for the development of new designs, such as biomimetic structures. In particular, composite structures could now be tuned rapidly. ANN algorithms were demonstrated to be suitable for such areas, especially in tuning material properties and the capability to generate new designs that outperform existing composites available in the dataset by [30][31]. CANN was used to predict the stiffness and toughness of the composite. ANN simulation, which includes the training (n = 80,000) and predictive (n = 20,000) phases, is found to be 250 times quicker compared to FE simulations. It is shown that a small amount of training data is sufficient to obtain an ANN model with high accuracy. Furthermore, obtaining an optimal design for the composite remains possible with incomplete information.