Therapeutic monoclonal antibodies (mAbs) target specifically antigens and have proven their efficacy in many human diseases, especially autoimmune diseases (rheumatoid arthritis, lupus, psoriasis, inflammatory bowel diseases), cancers (breast, lung, colorectal, and hematological cancers). Their humanization has greatly enhanced their biocompatibility and decreased their side effects such as immunogenicity. The clinical success of mAbs has expanded their application domain to other pathologies such as infectious, migraine, asthma, and hereditary diseases.

Monoclonal antibodies are highly complex glycoproteins from the immunoglobulin G class with a large molecular weight (MW ≈ 150 kDa). They consist of two light chains (LC, MW ≈ 25 kDa) and two heavy chains (HC, MW ≈ 50 kDa) of polypeptides linked together by inter-chain disulfide bonds and non-covalent interactions (Figure 1). Intra-chain disulfide bonds form constant and variable domains in the polypeptide chains [1]. Variable domains comprise complementarity determining regions (CDRs) that are considered as signature peptides responsible for antigen-binding specificity [2]. The constant region is characteristic for a given immunoglobulin class (IgG, IgM, IgA, and IgE) or subclass (IgG1, IgG2, IgG4). Monoclonal antibodies are the products of a long manufacturing process wherein many post-translational modifications (PTMs) occur on the polypeptides chains like N-terminal pyroglutamate formation, C-terminal lysine truncation, and glycosylation, adding another level of complexity [3]. Biantennary glycans are linked to an asparagine residue in the heavy chain and some mAbs possess several glycosylation sites on HCs and LCs such as cetuximab [4]. These N-glycans are highly heterogeneous and affect the anti-inflammatory properties of mAbs resumed on the following effector functions: antibody dependent cell-mediated cytotoxicity (ADCC) and complement dependent cytotoxicity (CDC) [5]. Other enzymatic, physical, and chemical modifications can occur during the manufacturing steps of mAbs. These modifications may cause micro-variations in size and/or charge (e.g., asparagine deamidation, pyroglutamate formation, methionine oxidation, C-terminal clipping, and cysteine-related modifications) or promote macro-variations such as denaturation, fragmentation or aggregation [6]. The majority of micro-heterogeneities are considered critical quality attributes (CQAs) because they may alter the pharmacokinetic and pharmacodynamic properties of mAbs such as half lifetime, antigen binding, anti-inflammatory property, or increase their immunogenicity [7][8]]. The International Conference on Harmonization (ICH), FDA, and EMA guidelines as well as pharmacopeia monographs require the physicochemical characterization of micro-heterogeneities and the evaluation of their impact on the quality, efficacy, and safety of mAbs [9]. 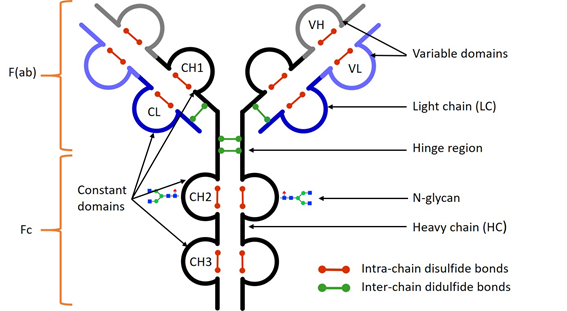 Capillary electrophoresis has become a powerful technique for mAbs analyses at different steps of their development from clone selection to batch release. It allows extensive characterization of mAbs from the peptide (bottom-up) to the protein (intact and middle-up) level as well as N-glycans. Capillary electrophoresis is a powerful, cost-effective, and eco-friendly technique. The different CE modes are well adapted with mAbs analysis. The CZE mode is the most used due to its simplicity and flexibility regarding analysis conditions (denaturing or native conditions, MS-compatible or not). Coupled to MS, CZE provides a comprehensive physicochemical characterization of mAbs: peptide mapping, site-specific characterization, charge heterogeneity assessment, glycosylation profiling, and impurities analysis. In addition, CZE offers attractive features for miniaturization, sample preparation automation and its integration with separation and detection. Both CGE and MEKC are relevant techniques for size heterogeneity assessment and glycans analysis. Capillary isoelectric focusing is considered as the reference technique for pI determination and charge variants profiling. Additionally, mAbs analyses were implemented successfully with microfluidic devices. The reduction of sample preparation complexity, analyses with native CE–ESI–MS, the coupling of originally non MS-compatible modes of CE to MS and bi-dimensional methods with orthogonal techniques to get more reliable information is the next step for substantial investigation of mAbs.