Many pathways in mammalian cells rely on molecular oxygen; especially the final step of the mitochondrial respiratory chain. If oxygen levels drop below a cell-dependent critical level, cells experience hypoxia and cannot sustain aerobic respiration and subsequent ATP production. A switch to glycolysis, the less efficient but oxygen-independent pathway of producing ATP, is required to ensure cell survival. The switch between modes of energy generation and ultimately the adaption to a low oxygen environment, is controlled by the hypoxia signalling pathway. Hypoxia-inducible factors (HIFs), of which the first was described as a nuclear factor that enhances transcription of the erythropoietin (EPO) gene under hypoxic conditions by binding to a 3’ enhancer sequence element, are part of this pathway and maintain the adaptation at the transcriptional level [1][2]. HIFs consists of an oxygen-dependent α subunit that is destabilised in normoxia and a constitutively expressed β subunit (HIF-1β or ARNT) [3][4]. Three HIF-α subunits (HIF-1α, HIF-2α, HIF-3α) have been described, of which HIF-1α and HIF-2α are the best understood and considered as the major activators of hypoxia-induced gene transcription [2][5][6]. HIF-α and HIF-1β heterodimerise via their basic helix-loop-helix (bHLH)/Per-ARNT-Sim (PAS) domains to form the active transcription factor dimer, which then binds to hypoxia response elements (HREs) within the DNA of target genes [7]. HIFs then recruit general co-activators such as CBP/p300 via the C-terminal transactivation domain (C-TAD), leading to the expression of more than ~300 genes [8][9].

While HIF-1α and HIF-2α appear to be able to bind the same HRE, they can occupy distinct genomic sites, which vary with cell types. They display different subnuclear localisation and intranuclear diffusion speed [10]. In addition, some studies showed that neither HIF-1α nor HIF-2α could substitute the lack of DNA binding caused by the absence of the one or the other HIF-α variant [11]. However, others have shown that the loss of a single HIF-α isoform (either HIF-1α or HIF-2α) is compensated by the enhanced expression of the other and promote survival during cancer development [12]. This highlights the potential for specific contexts, whereby there may be a compensation mechanism when a single HIF-α isoform is silenced. These findings support, in part, the idea that HIF-1α accounts for acute and HIF-2α for chronic responses to hypoxia [13]. HIF-3α is less explored than HIF-1α or HIF-2α. HIF-3α mRNA is subject to alternative splicing in humans and in mice [14][15]. A specific mouse splice variant called inhibitory PAS domain protein (IPAS) was shown to interact directly with HIF-1α. The IPAS/HIF-1α complex was unable to bind to HREs and suggested to be a negative regulator of HIF-1α [16][17]. By contrast, the long human splice variant HIF-3α2 induces expression of various genes among them the EPO gene [18].

The canonical regulation of HIF-α protein stability and activity involves a series of molecular interactions and reversible covalent modifications to specific amino acids, termed post-translational modifications (PTMs) [19][20][21]. A PTM can alter a protein’s enzymatic activity, localisation, stability, and/or interaction with other proteins. Therefore, these non-genetically encoded modifications that are mainly carried out by enzymes, add to the complexity of the proteome as they can ascribe different functionalities to the same gene product. Common PTMs to a target protein include phosphorylation, acetylation, methylation, and alkylation as well as the covalent linkage of fatty acids, saccharides or small proteins such as ubiquitin and SUMO (small ubiquitin-related modifier) [22].

2. Canonical Regulation of HIF-α, the Role of Ubiquitination

Whilst regulation of HIF mRNA levels by hypoxia plays a minor role in HIF abundance, regulation of protein stability, via PTMs, is essential for appropriate HIF accumulation during hypoxia [23]. The HIF-α proteins are destabilised in normoxia via the ubiquitin-proteasome pathway (Figure 1) [24][25]. To achieve this, post-translational hydroxylation of two conserved proline residues (Pro-402/Pro-564 in HIF-1α; Pro-405/ Pro-531 in HIF-2α; P492 in HIF-3α) residing within an oxygen-dependent-degradation (ODD) domain is required [19][20][26][27]. Prolyl hydroxylation is carried out by three mammalian HIF prolyl hydroxylases (PHD-1, -2, and -3; also known as EglN2, EglN1, and EglN3, respectively). PHD2 acts as the main regulator of HIF-α degradation and has a key role in HIF-α intracellular dynamics [28][29]. Once hydroxylated, the HIF-α proteins are recognised by an E3-ligase complex containing the von-Hippel-Lindau protein (pVHL), which acts as the substrate recognition unit and, together with Cullin-2 (Cul-2), Elongin-1, Elongin-2 and Ring-Box 1 (RBX1), polyubiquitinates K532, K538, or K567 on HIF-1α (and K497, K503, or K512 on HIF-2α) [30][31][32][33]. The polyubiquitylated HIF-α proteins are then degraded via the 26S proteasome [19]. When cells are deprived of oxygen, PHDs have less molecular oxygen available to act as a co-factor, hence decreasing their activity and subsequent HIF-α hydroxylation [34]. Consequently, HIF-α subunits accumulate in the nucleus, form a heterodimer with the constitutively expressed HIF-1β and bind to HREs [7]. HIF-α hydroxylation is not exclusively mediated via PHDs, but also by the Factor-Inhibiting HIF (FIH). FIH is an asparaginyl hydroxylase and modifies HIF-1α and HIF-2α on their C-TAD residues N803 and N847, respectively [35][36]. During hypoxia, FIH activity is suppressed, allowing HIF-1α or -2α to complex with the CBP/p300 co-activators and increased transcriptional activation. HIF-α hydroxylation has long been considered to be an irreversible PTM, but it was recently shown, by mass spectrometry, that the FIH-mediated asparagine hydroxylation is indeed a reversible process [37]. 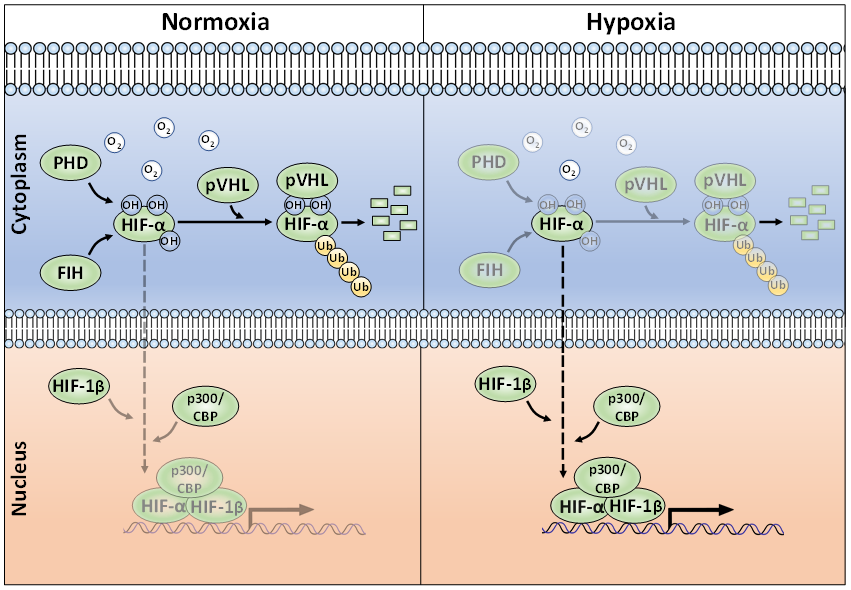 Figure 1. The canonical oxygen-dependent degradation mechanism for HIF-α by pVHL-mediated 26S proteasomal degradation and its inhibition by Factor-Inhibiting HIF (FIH) during hypoxia.

Polyubiquitination is a quintessential PTM in preventing unwanted HIF-α accumulation in normoxia. Aside from ubiquitination, the action of deubiquitinating enzymes (termed DUBs) are well-known for their roles in regulating HIF-α. The action of DUBs on HIFs has been extensively and recently reviewed and will not be covered here [38][39].

Whilst there are many well-characterised binding partners and indirect regulators of HIF-1α and HIF-2α, PTMs constitute an essential direct regulatory mechanism for the HIF transcription factors [40]. PTMs abundantly decorate the full-length of these oxygen-sensitive proteins to exert specific regulatory forces. Most of these covalent modifications are enzymatically driven, with some exceptions such as S-nitrosylation. For the past two decades, the PTM landscape of HIF-1α and HIF-2α has been ever-expanding, showing the intrinsic complexity and crosstalk of diverse intracellular signalling pathways implicating HIF activity, stability, and localisation (Figure 2). 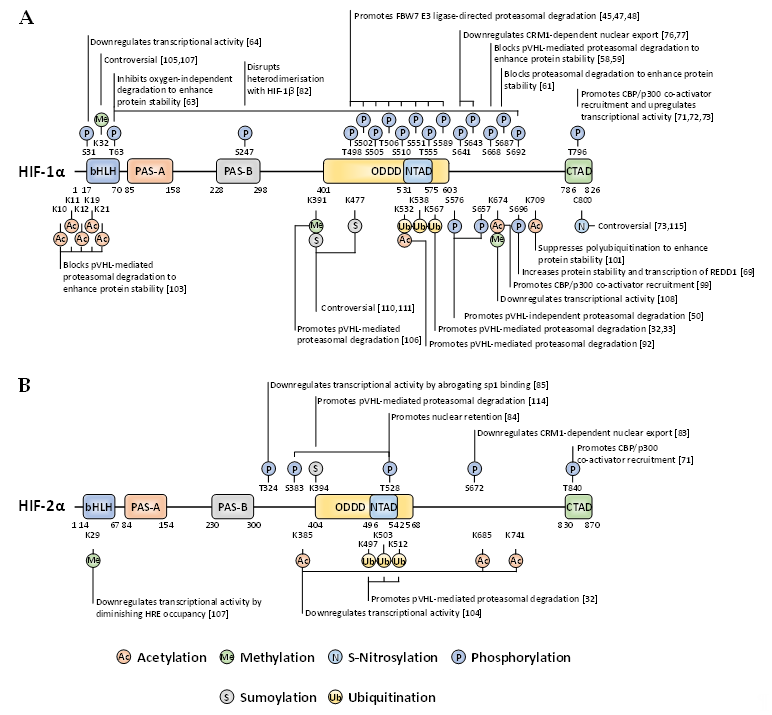 Figure 2. Localisation and function of non-canonical HIF-α post-translational modifications (PTMs) mapped onto full-length HIF-1α (A) and HIF-2α (B). When a given PTM has multiple publications stating conflicting functional outcomes, then the functionality is denoted as ‘controversial’.