Root-lesion nematodes of the genus Pratylenchus are migratory endoparasites belonging to the family Pratylenchidae (Nematoda, Tylenchina), with around 100 species recognized today.

Pratylenchus species can cause yield losses of up to 85% of expected production [4], and even higher losses when nematodes interact synergistically with certain soilborne plant pathogens [5]. Hence, Pratylenchus species are highly relevant to agriculture.

Israel is a small semiarid country located in western Asia, only 22,000 km2 in size. Despite the fact that the geography of the country is not naturally conducive to agriculture, advanced irrigation, cultivation mastery, use of elite varieties, and the introduction of state-of-the-art agricultural technologies contribute, in practice, to intensive and efficient farming. On the other hand, this success in agricultural productivity along with a diversity of climatic conditions have led to the proliferation of devastating plant-parasitic nematodes. Among them, Pratylenchus species are widely distributed in vegetable and crop fields in Israel and are associated with a major reduction in quality and yield. The genus Pratylenchus was first reported from Israel in 1957 [6]. Since then, several studies related to this nematode have been published [7][8][9][10][11][12][13][14]. However, these studies are largely scattered. Some of them are published in less accessible local journals, such as master’s or PhD theses, or in scientific reports written in Hebrew.

2. Biology and Pathogenicity of Pratylenchus Species

Pratylenchus species are polyphagous, migratory root endoparasites, developing and reproducing in the soil or roots. Their life cycle is simple and direct. The female lays its eggs singly or in small groups in the host root or in the soil near the root surface. Although little information is available about the true length of the Pratylenchus life cycle, on the basis of laboratory observations, research has estimated it to last from 45 to 65 days [45]. Symptoms caused by Pratylenchus are variable and depend on the host; they can include stunted and inefficient plant growth with reduced numbers of tillers and yellowed leaves.

Pathogenicity studies indicate that Pratylenchus species are very well adapted to parasitism, as extremely high populations in the soil do not kill their host plants. Nevertheless, damage thresholds range from 0.05 to 30 nematodes/cm3 of soil. Apart from direct damage to the roots, Pratylenchus species may also predispose plants to other pathogens (e.g., Verticillium and Fusarium), thereby increasing the damage extent [46][47]. Consequently, elimination of the nematode or reduction of its population causes a marked reduction in the incidence of fungi and an increase in crop yield. In Israel, the synergistic relationship between P. thornei and the fungus Verticillium dahliae caused a significant increase in the populations of both pathogens and in their damage to potato crops in the northern Negev [48].

Among the nine species recorded in Israel, P. mediterraneus, P. thornei, and P. capsici have been relatively more studied, and their biology and pathogenicity are discussed below.

Pratylenchus mediterraneus parasitism occurs mainly in the winter, but the nematode can survive for 7–8 months in a state of anhydrobiosis during the hot and dry season [8][49]. It is reactivated by the subsequent winter rains. In a field observation conducted by Orion et al. [10] from 1974 to 1983, the highest population of P. mediterraneus (as P. thornei in their paper) was recorded in the drought of 1978 and partial drought of 1982, and the lowest population in the unusually wet years of 1980 and 1983. Moreover, nematode populations with auxiliary irrigation treatments were extremely low. These data suggest that low moisture level—the natural condition in the northern Negev region—is a major ecological factor required for P. mediterraneus to build up its population, supporting the notion that P. mediterraneus is native to the semiarid zones of the Middle East [8][19] or, more specifically, the eastern Mediterranean region [50]. During the long hot season (April–November), the nematode population level remains stable due to anhydrobiosis [8]. In this state, the nematode can withstand conditions of 0% relative humidity, and desiccated nematodes can withstand temperatures of up to 40 °C. This characteristic enables their survival and facilitates their field or regional transmission in the northern Negev, where soil temperatures typically reach 40 °C in the hot season. This species is also likely to require the higher temperatures found in the Mediterranean region for its development, but this needs to be further studied.

The pathogenic effect of P. mediterraneus is limited to the early plant stages, resulting in reduced foliage and root growth of cereals and legumes, and thus influencing final plant density at harvest [12][14]. Pratylenchus mediterraneus was shown to be most concentrated in the root-tip region of hosts Vicia sativa and Trifolium alexandrinum. A histopathological study using scanning electron microscopy (SEM) showed nematodes penetrating the root epidermis and the cortical parenchyma through a clean-cut hole, probably a result of enzymatic activity and mechanical force [53]. When passing through parenchyma cells, P. mediterraneus can consume the cell contents, and these cells are thus void of cytoplasmic structures compared to the prominent nuclei and cytoplasmic structures in adjacent intact cells [12]. Typical symptoms caused by P. mediterraneus on common vetch were lesions produced along roots. These lesions lacked root hairs, with necrotic epidermal cells consisting of many holes, leading to severely deformed roots. Similar to P. penetrans [54], Orion and co-workers [12][37] speculated that P. mediterraneus can infect root tips as ectoparasites as well. Further SEM analysis showed the collapse of the parenchyma cells in the root lesion as the result of nematode feeding activity. The observed destruction was limited to the root cortex with an intact central cylinder, while nematode egg deposition was observed in cavities of the root cortex. These findings were similar to observations of P. vulnus in sour orange [55], P. penetrans in broad beans [56], and Pratylenchus zeae in maize [57].

Pratylenchus penetrans and P. crenatus Loof, 1960 have been reported worldwide as the major causal agent of carrots and Kuroda-type carrots [58][59][60][61]. In an investigation of carrot nematodes in Shoval, located in the northern Negev, we failed to detect these species. Instead, the field was infested with P. thornei, resulting in significant quality loss due to forking of carrot taproots [41]. However, whether P. thornei is the causal agent of these symptoms still needs to be confirmed, as continuous sampling from carrots demonstrated that the forking symptoms were not necessarily related to nematode occurrence [41].

Pratylenchus capsici is an endemic Israeli species that is widely distributed in the Arava Rift Valley, causing significant yield reduction of pepper (Figure 2).

The emergence of this species was surprising, as this remote region is isolated from the country’s other agricultural areas. Moreover, until 1995, the entire region was free of reported nematodes, mainly due to intensive soil fumigation with methyl bromide [62]. Since the phase-out of this fumigant, certain species of Meloidogyne and Pratylenchus have become established in the soil, causing substantial damage to vegetable crops. Further biogeographical analysis suggested that a P. capsici population in weeds (Chenopodium album and Sonchus oleraceus) was an important source for P. capsici dispersal, either as the original nematode source or in maintaining the population between growing seasons (Figure 3).

Figure 3. Weed distribution and function as a reservoir for Pratylenchus capsici during and in between growing seasons. (A) Weeds emerging early after pepper seedling planting, and (B) throughout the pepper-growing season. (C) Lesions caused by P. capsici on Chenopodium album growing alongside the pepper plants.

Pratylenchus capsici has been shown to survive through the seasons with no host from April to July. During this period, nematode activation is prevented by the high temperature and low moisture in the soil. Extensive nematode extraction from roots and soils yielded a high number of nematodes in the former and low numbers in the latter, supporting its exclusive endoparasitic life strategy. Therefore, these observations raise the question of whether P. capsici is ever anhydrobiotic, and if so, whether it goes through anhydrobiosis in the roots or in the soil. Similarly, P. capsici’s capacity to migrate to lower soil levels during the off seasons is not known. Further study is needed to clarify this question.

3. Phylogeny and Evolution of Pratylenchus Species Occurring in Israel

To date, nine species of Pratylenchus have been reported from Israel, with molecular data available for only three of them (P. thornei, P. mediterraneus, and P. capsici) (Figure 4). The concatenated phylogeny based on 18S and 28S rDNA and internal transcribed spacer (ITS) suggests that P. thornei and P. mediterraneus form a well-supported (posterior probability (PP) = 1, bootstrap (BS) = 100) monophyletic group, concurring with previous studies [18][24]. 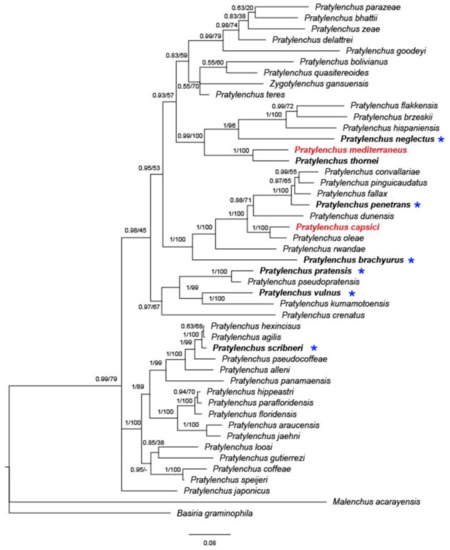 Orion [50] suspected that P. mediterraneus is a native or at least old inhabitant of the semiarid region of the Eastern Mediterranean. Given the similarities in morphology and morphometric features, the overlapping geographical area (Mediterranean region), the same hosts (mostly cereal and legumes), and the anhydrobiotic survival properties, P. thornei and P. mediterraneus could be derived from recent speciation events, with insufficient time to attain complete morphological differentiation.

Similarly, P. capsici is sister to P. oleae in concatenated phylogeny (Figure 4, PP = 1, BS = 100), as well as in a previous study [18]. Pratylenchus oleae was found in the Mediterranean region, parasitizing both wild and cultivated olive trees in Spain and Tunisia, with the presence of the nematode in wild olive not showing any clear symptoms in the aboveground plant or roots [3]. Interestingly, P. capsici was found in both pepper and weeds, markedly damaging the pepper but causing very mild symptoms on the weeds. Later, population genetic analysis revealed that P. capsici is likely to have been native to wild grass and transmitted to pepper by a recent expansion [18]. The adjacent distribution, similar morphology and presumably similar transmission background give rise to the idea that the two closely related species, P. capsici and P. oleae, may be native to the Mediterranean region.