Hormones are secreted primarily by glands or specific cells, circulate in the bloodstream, and specialize in targeting cells. The electrochemical biosensing of hormones has emerged for treating human diseases and performing clinical diagnosis.

The development of biosensors enables detecting biomolecules and other phenomena, including hormones [1][2].  The quantity of hormones that regulate and control the metabolism of the human body is very low, leading to efforts to develop a highly sensitive tool to detect them. The electrochemical approach has typically been used for hormone sensing because it can overcome the limitations of other well-established methods (e.g., ELISA) in terms of sensitivity, selectivity, and time performance [3][4]. One example is the modified screen-printed carbon electrode (SPCE) with cobalt nanoparticles (CoNPs) with chitosan and multi-walled carbon nanotubes (MWCNTs) (CoNPs/chitosan-MWCNTs/SPCE) that can successfully detect insulin with concentrations down to 25 nM. This finding could confirm the advantages of an electrochemical detection system [5]. This entry describes several current sensors for hormone detection that may contribute to the development of electrochemical-based hormone sensors.

Estrogen is a naturally occurring steroid hormone in mammals with unusual behavior when it reacts with its receptor [6]. It is an essential hormone in the female reproductive cycle, menstrual cycle, and growth, while it can also lead to obesity and infertility at abnormal levels. Eighty percent of breast cancers are affected by estrogen, indicating its association with cancer [7]. Therefore, estrogen-level detection is highly favorable due to its promotion effects and initial tumor formation. A detection platform that uses the estrogen receptor has been studied through an electrochemical detection platform that is non-destructive with high selectivity and sensitivity [8][9][10]. In 2018, Liu et al. developed an electrode surface transformation with a gold electrode on which 6-mercapto-1-hexanol (MCH) was used for a self-assembled monolayer (SAM) [11]. Graphene was treated with a bi-function to adsorb the E2-binding aptamers and the SAM on the MCH/Au modified electrode. Electrochemical detection was performed with a 20 mM PBS containing 5 mM FcCOOH and 0.1 M NaClO4. The DPV performance confirmed the enhanced detection of E2, respectively.

Nameghi et al. (2019) used the gold electrode and aptamers for the substrate to detect estrogen (Figure 1A). Previously, aptasensors have demonstrated satisfactory results at detecting their targets [9][10]. The immobilization was performed via thiol-modified split aptamers that can react with the gold surface [6]. CV was conducted through the proposed platform because the interfacial reaction could be determined via this method, thus enabling easy discrimination between estrogen and the control group through their signal (Figure 1B). The bare electrode presented the maximum CV current (curve A), which indicated excellent electron transfer between the bare gold electrode and [Fe(CN)6]3−/4−. When split aptamers were conjugated onto the gold electrode’s surface, the redox current decreased (curve B). From curve D, when adding the E2, the electrochemical signal was significantly reduced because the split1–E2–split2 complex was formed on the electrode. However, in the presence of bisphenol A (BPA) as non-target substances, the current signal of the split DNA aptamer modified electrode did not change (curve C). Furthermore, DPV analysis was performed, in which the concentrations of E2 were measured from 1.2 pM to 100 pM and 100 nM to 7 nM with a detection limit of 0.5 pM (S/N = 3). The outstanding performance of the proposed biosensors demonstrates their reproducibility, high sensitivity, and selectivity.

Human chorionic gonadotropin (hCG) is a glycoprotein hormone secreted by placenta trophoblast cells that functions as a diagnostic marker for pregnancy and a tumor marker [12]. The early quantitative detection of hCG is particularly challenging. Numerous hCG analysis methods have been reported, such as ELISA, fluorescence-labeled immunoassay, and radioimmunoassay [13][14]. Electrochemical detection could overcome the limitations of other methods (e.g., high cost, laborious, slow performance, and risk potential of radioactivity) [15]. A highly sensitive electrochemical immunosensor based on carbon nano-onions (CNOs), gold nanoparticles (GNPs), a polyethylene glycol (PEG) composite, and a glassy carbon electrode (GCE) was reported by Rizwan et al. [16]. This composite was drop-casted onto a pre-cleaned GCE as a self-assembled monolayer via chemisorption. The anti-hCG was then immobilized onto the modified CNOs/AuNPs/PEG/GCE biocompatible interface (Figure 1C). Before detecting the hCG, this fabricated sensor was incubated for 45 min at room temperature. This layer-by-layer fabrication was conducted through CV characterization. The detection of hCG was performed using square wave voltammetry (SWV), as illustrated in Figure 1D. This hCG immunosensor exhibited high sensitivity and productivity at a low detection concentration of 100 fg/mL.

Damiati et al. (2019) developed a screen-printed sensor based on the modified carbon macro- and micro-electrodes with a linker, 1-pyrenebutyric acid-N-hydroxy-succinimide ester (PANHS), and the immobilization of anti-hCG antibodies to detect hCG [17]. CV was conducted to characterize the modified electrode by increasing the scan rate from 10 to 100 mV/s. Furthermore, the SWV detection of the micro-electrode exhibited a higher sensitivity (1 pg/mL) than the macro-electrode sensor with a lower detection limit of 100 pg/mL. The working electrode’s physical size directly impacted the electrochemical sensitivity of biosensors that used macro- and micro-electrodes. The results of CV and SWV performance on the modified BSA/anti-hCG antibody/PANHS/SPCE demonstrated that the low-cost, label-free biosensor has high selectivity for hCG detection. 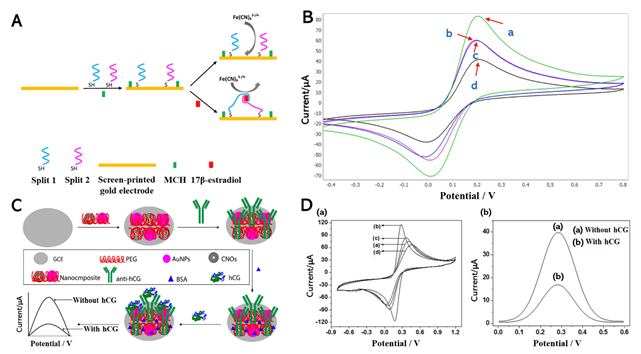