In recent years, the search for alternative routes to structure oil has gained increasing interest. Structured oils are referred to as oleogels, in which the continuous lipid phase is an edible oil, and the structuring agent forms a three-dimensional network. Such oleogels are used as a substitute for solid fats, which contain high amounts of saturated and trans fatty acids. Among available structuring agents that have been used to provide solid properties to liquid oils, protein is a more recent candidate. Due to their nutritional value and high consumer acceptance, proteins are of special interest for the preparation of edible oleogels as an alternative for solid fats. Whereas the field of protein oleogelation is still rather new and just starts unfolding, several preparation methods have been demonstrated to be suitable for protein oleogel preparation.

As proteins are predominantly hydrophilic, it is not a straightforward exercise to introduce proteins into an oil phase, which is of hydrophobic nature. In the last years, several methods have been developed to prepare protein oleogels, sometimes also in combination with polysaccharides. Figure 1 shows a schematic overview of the different methods. Some can be regarded as indirect methods, such as the templated approaches, whereas other methods have a more direct approach. 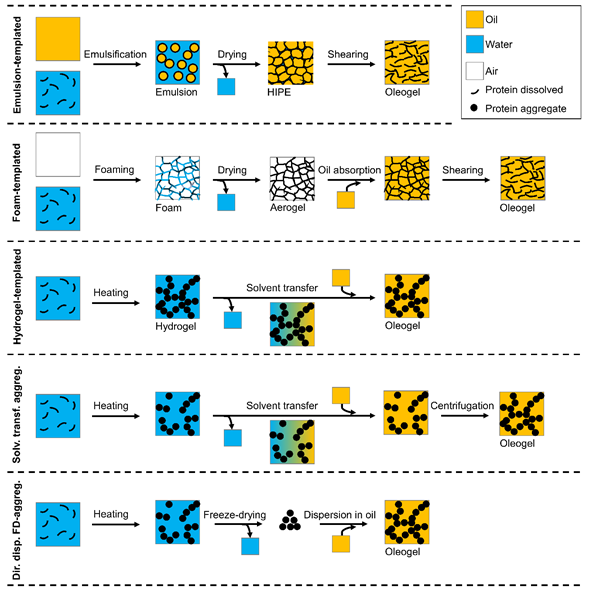 A commonly used method is the emulsion-templated approach, which was applied for the first time in 2006 by Mezzenga et al.[1] with β-lactoglobulin. The general idea of this method is to first prepare an oil-in-water emulsion with proteins as an emulsifier. Polysaccharides are often added to reinforce the interface. A sufficiently stable interface is crucial for the following step, in which the water is removed by drying. This leads to the formation of a high internal phase emulsion (HIPE), consisting of a three-dimensional network of polymers filled with liquid oil. The dried emulsions are obtained by drying in an oven at elevated temperatures,[2][3][4][5][6][7] by freeze-drying,[2][5][6] or by drying at room temperature.[1] In these systems, the oil itself is not structured, but is held together in a network of proteins and polysaccharides. To make an oleogel in which the oil is the continuous phase, the dried emulsion must be sheared, which breaks the continuous polymer network to obtain an oil-continuous material. The strength of the oleogel then depends on the specific combination of the proteins and polysaccharides used.

Similar to the emulsion-templated approach, also the foam-templated approach is based on freeze-drying of a previously prepared foam. After the drying step, oil is then added to the obtained dried foam-templates until saturation is reached,[8][9] or the template is immersed in oil to let the dried foam absorb the oil in its voids.[10][11] As the oil is added later, the final amount of incorporated oil depends on the absorption capacity of the dried foams (aerogels). Additionally, for foams it is important that the interfaces are stable enough to prevent coalescence of the air bubbles during drying. Although stable systems have been found with proteins only (gelatin, sodium caseinate),[10][8] additional polysaccharides are often added, such as xanthan gum,[8][9] hydroxypropyl methylcellulose,[7] and alginate.[11] After the oil is absorbed by the dried foam, a continuous protein–polysaccharide network with oil in the voids as the dispersed phase is obtained. To prepare real oleogels in which the oil is the continuous phase, the dried foam needs to be sheared to break down the polymer network. Also in this case, the gel strength of the oleogel depends on the specific combination of proteins and polysaccharides used.

De Vries et al.[12] obtained oleogels solely containing oil and protein (~10–16%) based on hydrogel-templates. First, protein hydrogels were obtained by heating of whey protein isolate (WPI)-solutions. Then the water-continuous phase of the hydrogels was replaced with sunflower oil by a stepwise solvent transfer procedure, in which either acetone or tetrahydrofuran was used as intermediate solvent. Only 1% of water was left in the final oleogels. Consequently, in this approach, the resulting protein oleogels consist of a three-dimensional network of dispersed proteins, which structures the continuous oil phase. These oleogels show a much higher gel strength than the other oleogels due to a strong protein network formation.

Another method developed by De Vries et al.[13] is the preparation of oleogels based on heat-set whey protein aggregates. Protein aggregates are formed by heating of an aqueous protein solution, and similar to the previously described method, the water is replaced with oil using an intermediate solvent by centrifugation and subsequent replacement of the solvent. In the final step, a dispersion of protein aggregates in oil is obtained, and gel formation is induced by centrifugation. The small amounts of water remaining in the obtained oleogel samples (~0.8%) showed that the solvent transfer method is an efficient procedure for water removal. The particle size (d4,3) of protein aggregates in oil was with ~200 nm comparable to the particle size in water before the solvent transfer procedure. The oleogels prepared with this method showed a lower gel strength than gels prepared with one of the previously described methods. However, the interactions of these oleogels can easily be altered by the addition of a small amount of a secondary solvent (water), which increases the gel strength by 3 orders of magnitude.

As the previous described “solvent transfer” method is rather laborious and requires large amounts of solvents, it was also attempted to obtain a protein aggregate powder by freeze-drying or CO2-drying, and to subsequently directly disperse this freeze-dried material into oil. De Vries et al.[14] and Plazzotta et al.[15] showed that it is possible to obtain a dried protein powder that could be used directly to form oleogels. The used drying method has an influence on the final particle size obtained, but in general, particle sizes between 200 and 700 nm were found. As for the “solvent transfer” method, the gel strength is comparably low, but can be considerably increased by addition of a small amount of a secondary solvent like water.

These results show that the gel properties are very dependent on the approach used for gel preparation, as well as additional treatments after the gels have been made.