Stilbenes are a small family of polyphenolic secondary metabolites that can be found in several distantly related plant species. These compounds act as phytoalexins, playing a crucial role in plant defense against phytopathogens, as well as being involved in the adaptation of plants to abiotic environmental factors. Among stilbenes, trans-resveratrol is certainly the most popular and extensively studied for its health properties. However, many other stilbenes, both monomeric and oligomeric, are currently under intensive investigation due to their biological role and bioactivity.

Stilbenes are a small yet important class of non-flavonoid polyphenols, sharing a common structure characterized by a 14-carbon skeleton composed of two benzene rings linked by an ethylene bridge (Figure 1). Due to the presence of the central ethylene moiety between the aromatic rings, stilbenes exist as the two possible stereoisomers cis and trans. However, the naturally occurring stilbenes are usually in the trans form [1]. Plant stilbenes, together with other polyphenols such as flavonoids, isoflavonoids, curcuminoids, and xanthones, belong to the class of polyketides. Over 400 different stilbene compounds are currently known [2], mostly derived from trans-resveratrol (3,5,4′-trihydroxy-trans-stilbene) (Figure 1), although different structures can be found in specific plant families [3].

Stilbenes have been identified in at least 72 plant species belonging to 31 genera and 12 distantly related families, including Pinaceae (e.g., Picea abies (L.) Karst. and Pinus nigra J.F. Arnold), Gnetaceae (e.g., Gnetum parvifolium (Warb.) W.C. Cheng and G. africanum Welw.), Fabaceae (Arachis hypogaea L. and Robinia pseudoacacia L.), Vitaceae (e.g., Vitis vinifera L. and V. amurensis Rupr.), Moraceae (e.g., Morus alba L. and M. macroura Miq.), and Polygonaceae (e.g., Polygonum cuspidatum Sieb. et Zucc. and P. multiflorum Thunb.) [4][5]. Given their nutraceutical value, stilbene content and composition have mainly been investigated in food plants, and the knowledge of stilbene distribution in nature is still poor. This is partially related to the complexity of the quali-quantitative analysis of stilbenes, which is in turn related to the unavailability of standards and the detection limits of analytical methods [2]. For these reasons, most of the studies carried out to date have been focused on simple stilbenes, such as resveratrol, piceid, pterostilbene, and piceatannol (Figure 1). Current knowledge on the distribution of stilbenes in the plant kingdom will not be presented in this review, as this topic is covered by excellent recent reviews [4][5]. Stilbenes are mainly involved in constitutive and inducible protection of the plant against biotic (phytopathogenic microorganisms and herbivores) and abiotic (e.g., UV radiation and tropospheric ozone) stress [3][6]. On one side they counteract the aggression exerting a direct toxic effect on the pathogen, while on the other they act as antioxidants, protecting the cells from oxidative damage [7][8][9]. Stilbenes possess several antipathogenic properties including antibacterial, antifungal [10][11], nematocidal [12], and insecticidal [13][14]. They could also act as a deterrent towards vertebrate herbivory [15], as a possible negative effect of stilbenes has been reported on snowshoe hares (Lepus americanus Erxleben) [16][17] and field voles (Microtus agrestis L.) [18]. The role of stilbenes, among other polyphenols, in counteracting oxidative stress is just as important, as the plant response to pathogen attack involves the production of reactive oxygen species (ROS), which both act as signals for the activation of stress and defense pathways and as toxic substances capable of directly damaging the pathogen. Oxidative stress may also be induced by many abiotic conditions, such as drought, thermal stress, ultraviolet radiation, mechanical stress, heavy metals, salts, and air pollutants such as ozone [19]. Unsurprisingly, many of these factors also affect stilbene production [20].

Over the past 20 years, the bioactivities of stilbenes have been intensively investigated due to their impact on human health. Among stilbenes, resveratrol is the best known and the most studied. Basic scientific research and over 240 clinical studies have demonstrated the multiplicity of trans-resveratrol pharmacological effects, including antioxidant [21], anti-inflammatory [22], anticancer [23][24], estrogenic [25], neuroprotective [26], cardioprotective [27], anti-atherosclerotic [28], anti-aging [29], anti-diabetic [30], anti-osteoporosis [25], and anti-obesity properties [31]. In recent years, considerable attention has also been paid to other monomeric stilbenes, including pterostilbene [32], pinosylvin [33], and piceatannol [34], as well as to oligomeric stilbenes such as viniferins [35][36], which have been shown to possess similar and often more pronounced health-promoting properties than resveratrol.

Due to their potential use in the nutraceutical, cosmeceutical, and pharmaceutical fields, great interest is directed at the methods for large-scale production of stilbenes. For instance, it has been estimated that the global market for trans-resveratrol will almost double in the next 6 years, from 58 million USD in 2020 to 99.4 million USD by 2026 [37]. Methods for obtaining stilbenes can be grouped into three categories: direct extraction from plants, chemical synthesis, and the use of biotechnologies. The chemical synthesis of stilbenes has been reported, but this method is not economically feasible, in addition to being difficult in terms of stereospecific synthesis [38][39]. Considerable efforts have been devoted to the development of biotechnological methods for stilbene production, which broadly include tissue culture techniques [40], biotransformation [41], and metabolic engineering [42]. Nevertheless, the major way of supplying stilbenes is the direct extraction from plants such as P. cuspidatum and V. vinifera [43].

Stilbenes are biosynthesized through the phenylpropanoid pathway, which is also responsible for the biosynthesis of numerous primary and secondary metabolites including flavonoids, coumarins, hydrolyzable tannins, monolignols, lignans, and lignins [44]. Generated by the shikimate pathway, the aromatic amino acid L-phenylalanine is the primary starting molecule of the phenylpropanoid pathway (Figure 2). The non-oxidative deamination of L-phenylalanine to form trans-cinnamic acid, catalyzed by phenylalanine ammonia-lyase (PAL; EC 4.3.1.24), is the entry step for the carbon channeling from primary metabolism into the phenylpropanoid secondary metabolism. PAL is ubiquitous in plants [45], and it is undoubtedly the most studied enzyme involved in plant secondary metabolism [46]. Cinnamic acid can be bound to a coenzyme A (CoA) molecule by cinnamate:CoA ligase (CNL; EC 6.2.1.-) to form cinnamoyl-CoA. Alternatively, cinnamic acid can be hydroxylated by cinnamate 4‐hydroxylase (C4H), a cytochrome P450 enzyme (EC 1.14.14.91), to form p-coumaric acid. Some plants (mainly monocots but also dicots) possess a bifunctional phenylalanine/tyrosine ammonia-lyase (PTAL, EC 4.3.1.25) that efficiently deaminates both L-phenylalanine (PAL activity) and L-tyrosine (TAL activity) [47][48][49][50]. These plants can directly produce p-coumaric acid using L-tyrosine as a substrate, bypassing the requirement for L-phenylalanine and C4H. A molecule of CoA is then bound to p-coumaric acid by 4-coumarate: CoA ligase (4CL; EC 6.2.1.12), generating p-coumaroyl-CoA, which provides an active intermediate in numerous branches of the general phenylpropanoid pathway [51]. 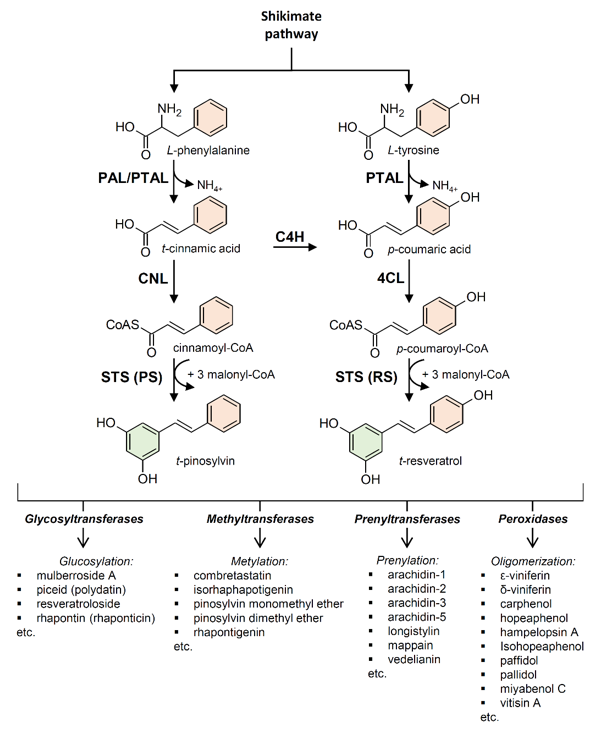 The enzyme stilbene synthases (STS) catalyze the direct formation of the stilbene skeleton through a single reaction from three units of malonyl-CoA and one CoA-ester of a cinnamic acid derivative (p-coumaroyl-CoA to form trans-resveratrol or cinnamoyl-CoA to form trans-pinosylvin) [52] (Figures 2 and 3). Malonyl-CoA is generated through a carboxylation reaction between acetyl-CoA and a bicarbonate ion (HCO3−) catalyzed by acetyl-CoA carboxylase (EC 6.4.1.2) in the presence of ATP (Figure 4). 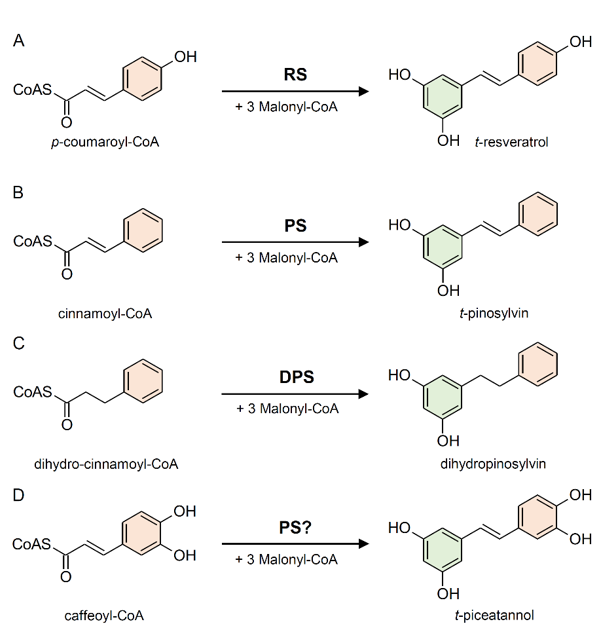 Based on the preferred starting substrate, STS enzymes are classified into either a p-coumaroyl-CoA-specific type, such as trihydroxystilbene synthase I (also known as resveratrol synthase, EC 2.3.1.95), or a cinnamoyl-CoA-specific type, such as pinosylvin synthase (EC 2.3.1.146) (Figures 2 and 3). The former type has been mainly found in angiosperms like peanut [53], grapevine [54], and Tatar rhubarb (Rheum tataricum L.f) [55], while the latter type is typical in conifers and has been identified in several Pinus species like Scots pine (P. sylvestris L.) [56], Japanese red pine (P. densiflora Siebold & Zucc.) [57], and Eastern white pine (P. strobus L.) [58].

Pinus species can biosynthesize two types of stilbenes, i.e., pinosylvin and dihydropinosylvin, which are biosynthetically derived from cinnamoyl-CoA and dihydrocinnamoyl-CoA, respectively (Figure 3B,C). STS from P. strobus shows a clear preference for cinnamoyl-CoA and was therefore characterized as pinosylvin synthase [58]. Otherwise, STS from P. sylvestris shows an unusual preference for dihydro-cinnamoyl-CoA, identifying it as a dihydro-pinosylvin synthase [56]. STS does not exhibit absolute substrate specificity. While showing a preference for a given substrate, the same STS enzyme can accept different cinnamic acid derivatives as starting substrates catalyzing the biosynthesis of different stilbenes. For example, the enzyme responsible for the biosynthesis of piceatannol (3,5,3′,4′-tetrahydroxystilbene) has not been identified yet, however, pinosylvin synthase from P. strobus proved to be active with caffeoyl-CoA in vitro (Figure 3D), suggesting that it could be responsible for piceatannol biosynthesis in planta [58].

STS enzymes belong to the type III polyketide synthase superfamily (PKSs), which also includes chalcone synthase (CHS; EC 2.3.1.74) [59]. STS and CHS share a high degree of similarity both in their amino acid sequence identity (which reaches 75–90% depending on the species) and in their crystallographic structures [51][60]. CHS genes are present in the genome of all plants analyzed so far, while STS have been identified in a limited number of plant species, often phylogenetically unrelated. Converging lines of evidence indicate that CHS is the archetypal enzyme from which STS evolved multiple times independently in stilbene-producing plants, through gene duplication followed by functional divergence [60][61][62]. CHS and STS are the most investigated enzymes among PKSs and, due to their high sequence similarity, they are often referred to as the CHS/STS family [63][64].

Although it employs the same substrates as STS, CHS is responsible for the first committed step in the biosynthesis of flavonoid-type compounds. Both enzymes generate the same linear tetraketide intermediate. However, CHS catalyzes a C6→C1 Claisen condensation of the intermediate to produce naringenin chalcone, while STS catalyzes an alternative C2→C7 aldol condensation of the intermediate to form a stilbene backbone (Figure 4) [59][65][66].

STS was first extracted and purified from suspension cultures of peanut cells elicited with UV radiation [53]. Cloning of two peanut STS genes revealed a high sequence identity with CHS throughout the coding region and the presence of an intron at the same position as a conserved intron in CHS [67]. STS genes and cDNAs were subsequently cloned and characterized from grapevine cell suspension cultures [68] and Scots pine plantlets [56], both induced by fungal elicitors. At present, STS genes have been cloned from several plant species including mulberry (Morus notabilis C.K. Schneid and M. atropurpurea Roxb.) [42][66], Scots pine [69], white spruce (Picea glauca (Moench) Voss) [70], Norway spruce (Picea abies (L.) H. Karst.) [71], Japanese red pine [57], and sorghum (Sorghum bicolor (L.) Moench) [72]. To the best of our knowledge, sorghum is the only monocot plant in which an STS gene (SbSTS1) has been identified.

In most stilbene-producing plants, STS exists as a small family consisting of 1–10 closely related paralogs. For example, the STS multigene family is represented by two members in white spruce [70] and Norway spruce [71], three members in Japanese red pine [57], almost five members in Scots pine [69], six members in peanut [73], and ten members in mulberry [66]. Remarkable exceptions to this role are sorghum, in whose genome only one STS gene has been identified [74][75], and grapevine, which possesses an uncommonly large number of STS genes. Both grapevine and sorghum genomes have been entirely sequenced [74][76]. Early Southern-blot analysis suggested that the grapevine STS gene family consisted of 15–20 members [77]. Genome-wide analysis carried out on the V. vinifera PN40024 genome led to the identification of 48 putative STS genes, designated VvSTS1 to VvSTS48, with at least 33 potentially coding for functional STS proteins [60][62].

To date, there is no evidence regarding the different substrate specificity and enzymatic activity of different VvSTSs. Functional characterization of nine VvSTSs confirmed that they encode for functional STS enzymes [62]. Since these nine genes were specifically chosen to represent the diversity of the VvSTS gene family, it is most likely that all grapevine VvSTSs encode enzymes with similar activity and specificity. Despite the high similarity between STS genes which makes it difficult to accurately distinguish the individual transcripts, gene expression studies revealed different transcriptional responses of distinct VvSTSs during development and in response to environmental stresses [60][78][79]. The expression of some VvSTSs was also found to be tissue-specific [60][79]. It is therefore likely that the large quantity of members in the grapevine STS gene family has evolved to allow for fine spatial and temporal regulation of stilbene biosynthesis under both normal and stress conditions.