Dactylorhiza hatagirea (Orchidaceae) is a perennial herb inhabiting sub-alpine to alpine regions, ranging at elevations between 2500 and 5000 m.a.s.l. With palmately lobed rhizome and lanceolate leaves having a sheathing leaf base, it bears pink flowers with purple-colored notches and a curved spur.

The Himalayas, extending into the Indian sub-continent, are considered to be a hotspot of biodiversity. Harboring 17,500 species of plants, modern and traditional medical practices (ayurveda, unani, and siddha) make use of almost 6000 of them [1][2]. They represent a remarkable contribution to the pharmaceutical field. Their trade in India is projected to be an estimated USD 1 billion per year [3][4]. Contributing indispensable raw material (flavonoids, alkaloids, saponins, etc.) for use in the formulation of different drugs, the demand for plants with ethnomedicinal importance has lately shown a surge, with wider employment in pharmaceutical practices. Aimed at maintaining individuals’ health, plant-derived substances (PDSs) such as taxanes, taxol, and cepholomannine from Taxus brevifolia Nutt. [5], diphyllin from Diphylleia grayi F. Schmidt [6], jatrophane from Euphorbia semiperfoliata Viv. [7], thymo-quinone and dithymoquinone from Nigella sativa l. [8] vinblastine from Catharanthus roseus (L.) G. Don, and others play a pivotal role in curing different diseases. The use of PDSs in disorders such as memory loss, osteoporosis, and age-related problems along with their function in boosting the immune system has broadened their potential in terms of use in modern healthcare systems [9].

As a preferable alternative to semi-synthetic drugs, natural products of plant origin are promoted as potential options for safer medicines and other life-saving drugs. The pharmaceutical use of medicinal plants with negligible side effects presents the possibility of their widespread application in mitigating the large fatalities associated with different deadly diseases [10]. Presently, plant species such as Dactylorhiza hatagirea provide an exemplary model for studying orchids as part of their ethnopharmacological properties and therapeutic applications. Owing to its immense significance in clinical research and drug discovery, the plant (tubers, leaves) has been used to study its potential to induce anti-inflammatory [11], anti-pyretic [12], anti-cancerous [13], neuropharmacological [14], and other effects. In the context of global health concerns, this medicinally important herb has broadly been used in the evaluation of its ethnopharmacological applications towards validating its efficacy and efficiency for use in combatting different diseases. The present study puts forth a summary of information on the botany, taxonomy, chemistry, and ethnopharmacology of D. hatagirea. As overexploitation of the plant for use in pharmaceutics has drastically reduced its populations and has brought it under threat, a section of the manuscript is dedicated to approaches adopted for its conservation and long-term survival in its natural habitat.

The article covers the literature available from 1984 to 2020. The information was located, selected, and extracted from scientific journals, books, thesis, and reports via library and electronic search (PubMed and other search engines). Documentation of the available information from the literature helped in drafting different sections of the manuscript, such as morphology, taxonomy, and others, along with ethnopharmacological uses that depict its importance in the present day.

Orchidaceae is a family of angiosperms with around 25,000–35,000 species and 800 genera [15]. Orchids received their recognition through herbal writings from Japan and China [16]. The Chinese were the first to cultivate and describe their use in the healthcare system [17]. Orchids such as Anoectochilus formosanus Hayata from Taiwan [18], Bletilla formosana (Hayata) Schltr. from China [19], Bulbophyllum kwangtungense Schltr. from Japan [20], Bulbophyllum odoratissimum (J.E. Sm.) Lindl. from Thailand [21], Calanthe discolour Lindl. from Korea and Malaysia [22], Catasetum barbatum Lindl. from Guianas, Japan and Paraguay [23], Coeloglossum viride (L.) Hartm. from Tibet [24], Cypripedium macranthos Sw. from Mexico, Guatemala, and Colombia [25], Dendrobrium sp. from China, Japan, Taiwan, and Australia [26], Listera ovata (L.) R. Br. from Spain [27], Maxillaria densa Lindl. from Mexico [28], Nidema boothii (Lindl.) Schltr. from Malaysia [29], Spiranthes australis (R. Br.) Lindl. from Trinidad and Tobago, and Vanda tessellate (Roxb.) ex G. Don from India, Sri Lanka, and Burma [30] have made a significant impact, as their derivates (crude extracts as well as secondary metabolites) are used to treat various diseases.

Orchids are recognized throughout the world for the production of compounds used in the treatment of different diseases. In India, 1141 species belonging to 166 genera of orchids have been reported [31]. Here, the use of orchids in medicinal practices dates back to Vedic times. In addition, some members of Orchidaceae family are used to treat nerve disorders, fever, bone fractures, general weakness, tuberculosis, and other dermal problems [32][33]. D. hatagirea finds its use in a wide array of medicinal practices [34]. As per the published records, D. hatagirea is used for the treatment of amala pitta (gastritis), madhya bhangaasthi (bone fracture), jvara (fever), vajikarana (erectile dysfunction), haima (cold), bhishajyati (wound healing), and ayurdamah (nerve tonic). With the growing research in the biopharmaceutical and drug industry, extraction of the secondary metabolites and antioxidants from this plant has increased its demand [35].

D. hatagirea, an important medicinal herb belonging to the Orchidaceae family, is commonly known as Himalayan marsh orchid [36]. It is a perennial herb confined to alpine regions at an elevation of 2500–5000 m.a.s.l. [37][38]. D. hatagirea bears slightly flattened, 3–7-fingered, palmately lobed, creamish-colored, tuberous roots measuring 5–12 ± 3.3 cm in length. The peduncle is generally 27–41 ± 6.7 cm tall. Leaves are acuminate or apex obtuse, linear-lanceolate to oblong clustered and sub-opposite towards base. Flowers grow in dense spike inflorescences and are zygomorphic, having fused male and female reproductive organs (a condition referred to as gynostemium, column, or gynostegium) (Figure 1). Flowers are pink, bearing purple-colored notches with six free perianth segments. The innermost segment forms an enlarged, pink-colored and sculptured labellum, which acts a resting pad for the pollinators, while the rest of the segments are similar in shape and form. Flowers show resupination at 180°, which brings the labellum perpendicular to the ovary. Flowers bear two dark green-colored pollinaria covered inside the anther cap. Each pollinarium bears a central sterile axis which combines with the pale yellow-colored caudicle (stalk). Caudicles at the upper side are separated by rostellum; however, at their base, they are joined by a sticky structure known as retinacula or viscidia. The ovary is tricarpellate, inferior, twisted and consists of one chamber with parietal placentation, having a large mass of ovules. Fruits are loculicidal capsules and minute seeds are generally liberated as immature embryos at the globular stage. 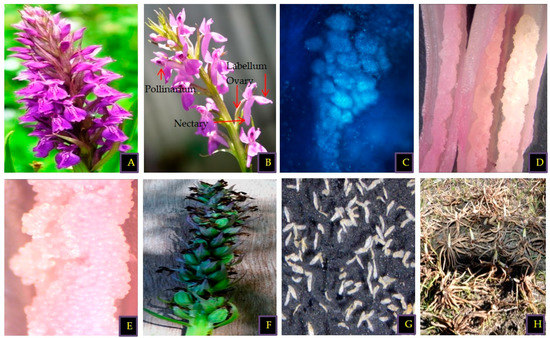