Air pollution is a major environmental risk to health and a global public health concern. In 2016, according to the World Health Organization (WHO), ambient air pollution in cities and rural areas was estimated to cause 4.2 million premature deaths. It is estimated that around 91% of the world’s population lives in places where air pollution exceeds the limits recommended by the WHO. Sources of air pollution are multiple and context-specific. Air pollution exposures are established risk factors for development and adverse health outcomes in many respiratory diseases, including asthma, chronic obstructive pulmonary disease (COPD), or lung cancer. However, possible associations between air pollution and idiopathic pulmonary fibrosis (IPF) have not been adequately studied and air pollution seems to be an underrecognized risk factor for IPF.

Clean air is a basic requirement for human health and well-being. According to the World Health Organization (WHO), air pollution kills an estimated seven million people worldwide every year. The WHO data shows that 9 out of 10 people breathe air that exceeds WHO guideline limits containing high levels of pollutants, with low- and middle-income countries suffering from the highest exposures [1]. Human airway epithelium constitutes the first line of interaction with an atmospheric environment. This interaction between the airway epithelium and the inhaled environment is crucial in the pathobiology of respiratory diseases [2]. Idiopathic pulmonary fibrosis (IPF) represents one of the common types of interstitial lung diseases (ILDs), a heterogeneous group of chronic lung conditions characterized by inflammation and fibrosis of the pulmonary parenchyma. The natural history of IPF is outlined by an inevitable progressive decline of lung function, physical activity limitation, impairment of quality of life, and premature death, with a median survival of 3 to 5 years [3]. The chronic, repetitive, subclinical micro-injuries to the alveolar epithelium caused by the exposure to various noxious stimuli are leading in the predisposed individuals to subsequent dysfunction of the alveolar epithelium, which is central for the initiation and perpetuation of the pathogenic process in IPF [3]. Both ambient and indoor air pollution exposures are established risk factors for respiratory diseases [4]. Moreover, air pollution leads to a number of adverse health outcomes in asthma, chronic obstructive pulmonary disease (COPD), respiratory infections, lung cancer, and lung transplant recipients [5][6]. Yet, relatively little attention has been given to investigate the relationship between air pollution and IPF. Moreover, ambient air pollution exposure seems to be often overlooked as an important risk factor for disease initiation and adverse respiratory outcomes in IPF.

2.1. Types and Sources of Air Pollutants

The term “air pollution” refers to a complex mix of gases and particles. The most important gaseous compounds are nitric dioxide (NO2), other nitrogen oxides (NOx), carbon monoxide (CO), sulfur dioxide (SO2), and ozone (O3). Particulate matter (PM) is classified according to its aerodynamic diameter to coarse particles, PM10 (≤10 µm), fine particles, PM2.5 (≤2.5 µm), and ultrafine particles PM0.1 (≤0.1 µm). Industry, primarily based on coal burning, was the main source of air pollution in the past. Today, still, industrial pollution and so-called traffic-related air pollution (TRAP) are the main sources of ambient air pollution. PM is generated through two main processes: natural (which includes phenomena like sea sprays, volcanic eruptions, forest fires, and soil erosion) and anthropogenic, related to road traffic and other forms of transportation, and industry (mainly electricity generation, mining, welding, or building) [7]. The burning of fuels, such as diesel, petrol, oil, wood, is related to PM production. When particles are generated and released directly to the atmosphere, they are called primary PM. Secondary PM is generated due to chemical reactions, gas-to-particle conversion processes, which include nucleation, condensation, and coagulation of gases and particles, leading to an increase in their diameter [7][8]. The particle diameter is crucial for deposition in the airways. Gases and particles that form the aerosol deposit in the airways through a combination of inertial impaction, gravitational sedimentation, and Brownian diffusion. The coarse fraction (PM10-2.5) settles in the upper airways. Fine fraction (PM2.5) is deposited in the lungs, and smaller particles may be transported through the capillaries to the systemic circulation, and further to other organs of the body. The large surface area of PM contributes to the combination of toxic compounds, including polycyclic aromatic hydrocarbons (PAHs), volatile organic compounds (VOCs), and transition metals, which are responsible for free-radicals formation [7][8].

Smog is a term used for the description of a mixture of pollutant gases and particles in the atmosphere, forming intense air pollution. The term was coined from two words, smoke and fog, and refers to the situation when air pollution episodes lead to a decrease in air transparency. Photochemical smog is the smog that contains a high concentration of O3 and other reactive chemical compounds generated by the action of sunlight on NO2 and hydrocarbons. It is considered especially toxic and is mainly related to road traffic air pollution in the summer months. Stagnant air, windless weather, and specific terrain configuration (river valleys) have been assigned as main causative factors of tragic environmental pollution episodes leading to thousands of excess deaths in Meuse Valley, Belgium (1930), Donora, Pennsylvania, USA (1948), and London, United Kingdom (1952) [9].

A body of evidence indicates that abnormal activation of alveolar epithelial cells (AEC) and fibroblasts in an aging lung plays a central role in the pathogenesis of IPF. The actual hypothesis of IPF pathogenesis points out the repetitive micro-injuries to the alveolar epithelium occurring in the predisposed individuals, in whom susceptibility is a consequence of the cellular senescence and accelerated epithelial cells aging, leading to aberrant healing at the site of injury and resulting in the exaggerated production and accumulation of interstitial fibrosis [3], see Figure 1. Type II AEC, responsible for the renovation of the alveolar epithelium, become “exhausted” and unable to restore normal lung architecture. Collagen and other components of extracellular matrix (ECM) replace normally structured alveoli, leading to irreversible loss of alveolar surface and impairment of gas transfer through the alveolar-capillary interface. Fibroblasts and myofibroblasts are effector cells that are direct sources of ECM components. Various growth factors and other pro-fibrotic cytokines are responsible for the formation of a pro-fibrotic microenvironment [3]. In the context of ambient air pollution as an important risk factor for IPF, several interrelated elements of the pathogenesis of lung fibrosis are of special interest. These include oxidative stress related to external (environmental) and internal (host-related) sources of reactive oxygen species (ROS), mitochondrial dysfunction and short telomeres as a cornerstone of accelerated aging of lung cells predisposing to ineffective healing, cellular senescence as a consequence of the latter, and, last but not least, a complex process of ECM remodeling, which includes mobilization of fibroblasts and myofibroblasts to the lung, different mechanisms responsible for “shifting” from physiological restoration of alveoli to uncontrolled scar formation, and deposition of ECM components [3][10][11][12][13]. 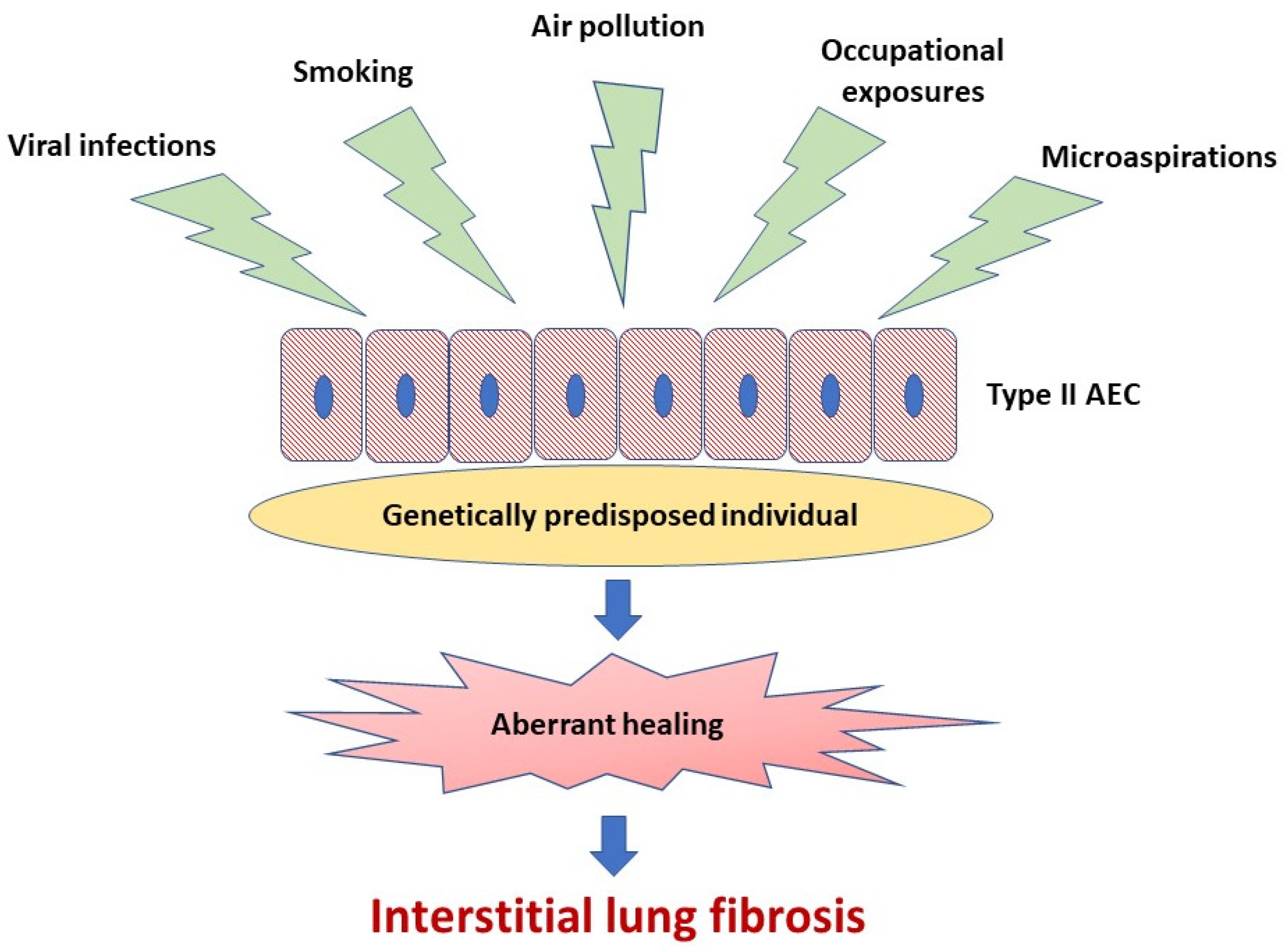 Figure 1. Idiopathic pulmonary fibrosis pathogenesis. Repetitive micro-injuries to the type II alveolar epithelial cells (type II AEC) in the predisposed individuals are leading to aberrant healing at the site of injury and resulting in the exaggerated production and accumulation of interstitial fibrosis. Ambient air pollutants, cigarette smoke, viral infections, occupational exposures, and microaspirations act as triggers for the disease initiation in a genetically predisposed individual.