The efficient and selective delivery of therapeutic drugs to the target site remains the main obstacle in the development of new drugs and therapeutic interventions. Up until today, nanomicelles have shown their prospective as nanocarriers for drug delivery owing to their small size, good biocompatibility, and capacity to effectively entrap lipophilic drugs in their core. Nanomicelles are formed via self-assembly in aqueous media of amphiphilic molecules into well-organized supramolecular structures.

Progress in the development of new nanotechnology-based approaches and efficient drug-delivery carriers has enabled targeting therapeutic molecules to target tissues. To achieve an efficient therapeutic response, two important factors should be taken into consideration. The first factor is the delivery of the necessary amount of active compound to the target site and the second factor is to maintain the effective dose for a certain time. However, it is difficult to control these factors for most drugs due to various insuperable barriers, including imperfect pharmacokinetics, loss of specificity for a target, and extensive biodistribution. Up to date, most developed anticancer drugs are hydrophobic and their biodistribution in body limits the dose because of the side effects. Therefore, the targeted nanomedicines based on controlling the drugs delivery and reducing toxicity have become a popular field of research. This research aims to develop and design effective approaches to overcome existing medical issues and to establish the basis for unprecedented or revolutionary treatments [1][2][3].

Up until a few years ago, a different class of nanomedicine targeting strategies based on liposomes, dendrimer, and micelles is promoted as promising drug delivery systems (DDSs) for controlled, sustained, and targeted delivery due to their properties to reduce the toxicity toward nontargeted tissues and lead to the accumulation of drugs at the targeted site [4][5][6][7]. Among these DDSs, nanomicelles have received tremendous interest in nanomedicine due to their low-cost, great biocompatibility, simple preparation methods, and effectiveness [8]. Moreover, nanomicelles compared to conventional micelles are more thermodynamically stable in physiological solutions. This stability is indicated by the lower critical micellar concentration (CMC), which is essential for the stability and slow dissociation in vivo microenvironment [9]. As reported, the nanomicelles have shown lower dissociation kinetics after dilution around 1000-fold slower compared to conventional surfactant micelles. This property is essential for DDSs, which circulate in the bloodstream until their accumulation in the target site [10][11].

Significant efforts have been devoted to ensuring the accumulation of DDSs in the target location via the conjugation of nanomicelles with specific ligands such as aptamers, antibodies, and other biological molecules [12][13][14][15]. Any disease and disorder is followed by changes in the microenvironment of the unhealthy tissues that can be used in targeting strategies. One of the popular targeting materials is folic acid (FA), which binds to cancer cells, which overexpress folic receptors. For instance, Park and coworkers have encapsulated doxorubicin (DOX) inside the (PEG–poly[lactide‑co‑glycolide]) nanomicelles conjugated with folate to ensure selective delivery [16]. In a similar study, nonionic alginate-based polymers and FA have been developed by Tawfik et al. and showed that when the particle is covered by FA, it can be easily entrapped into KB cells by the folate receptors [17].

To expand the performances of DDSs, various endogenous and exogenous stimulations-responsive functionalities have been introduced. Characteristics of microenvironment, such as pH, expression of enzyme, and temperature can vary in normal and disease state, thus they can be employed as endogenous stimulation. Another category of stimulation is exogenous stimulation, including redox potential, magnetism, light, and ultrasound triggering. This method can promote the release of the drug at a specific location via specific stimulation. Moreover, this strategy provides improved drug release, enhances therapy, controls some activity on the microenvironment of the target area [18][19][20]. Additionally, imaging and delivery systems utilizing photoluminescence, particularly fluorescent nanomicelles are becoming desirable as possible cancer screening tools [17][21][22].

Amphiphilic molecules are common subunits of supramolecular assembly such as liposomes, micelles, and nanomicelles due to the possession of both hydrophilic (polar) and hydrophobic (nonpolar) groups. The assembly of these molecules occurs due to the orientation of the groups to a suitable environment such as a solvent. For instance, if the solvent is polar, the hydrophilic portion of molecules orients toward the outer surface to maximize contact with a polar solvent, while the hydrophobic parts are clustered in the core to minimize contact with a polar solvent [21][23][24]. This kind of supramolecular assembly is referred to as normal nanomicelles. Alternatively, the supramolecular assembly formed in the nonpolar solvent is known as reverse nanomicelles, in which the hydrophobic portion orients to the surface to maximize the contact with the solvent and hydrophilic portion orients to the core to dodge the contact with a solvent. The property to change the orientation depending on the solvent allows loading different types of the drug into nanomicelles. Nonsoluble drugs can be loaded into normal nanomicelles while soluble drugs can be loaded in reverse nanomicelles [25]. Nanomicelles act as a protective shell by reducing the direct contact of drugs with the in vivo environment, thus they improve drug bioavailability and reduce adverse side effects [26][27][28].

Surfactant is one category of amphiphilic molecules that have hydrophilic heads and hydrophobic tails. Surfactant tends to form a supramolecular assembly known also as a colloidal dispersion, which has a small diameter in the range from 5 to 100 nm [29]. The control of the size of the micelles is based on the characteristics of the head group and the variation of the alkyl chain length [30][31]. Head groups are classified in different groups such as charged (anionic or cationic), dipolar (zwitterionic), and noncharged (nonionic) [32]. In aqueous solution, surfactant orients with head to the solvent and first accumulates on the air-liquid interfaces. By increasing the amount of surfactant, we induce the self-assembly of surfactants into micelles (Figure 1). Moreover, the hydrophobic core is formed via the van der Waals bond recognition [29]. The concentration above which the surfactant starts to self-assemble into micelles is known as critical micellar concentration (CMC). The formed micelles will set up a hydrogen bond crosslink between the head group and water molecules from aqueous solution.

Figure 1. Schematic representation of unimer–micelle equilibrium in water. Reprinted with permission from [33]. Copyright © 2017, The Royal Society of Chemistry.

Self-assembled micelles can have various structures such as a sphere, cylinders, lamellar, and vesicles based on the characteristics of the medium, length of chain, and temperature (Figure 2) [9][34][35]. Low molecular weight surfactants have considerably higher CMC, which is 10−3 to 10−4 M, compared to polymeric amphiphilic molecules, which has a CMC located in the range of 10−6 to 10−7 M. Micelles with lower CMC are preferable in DDSs because of their relatively higher stability and insensitivity to the dilution, which enables their longer circulations in the bloodstream [36]. Functionalizing the polymeric micelles with polyethylene oxide (PEO) or polyethylene glycols (PEG) group results in physically blocking the interparticle interaction between core regions and hinders interactions between the core-forming blocks and blood components. Especially, the long chain of PEO and high surface density lead to minimizing protein adsorption to hydrophobic surfaces [37]. For polymeric micelles, the length of the PEO chains affects circulation time and uptake by the reticuloendothelial system, with longer chains prolonging circulation time and minimizing reticuloendothelial system uptake [38]. Because PEO blocks are relatively inert and provide ‘‘stealth’’ characteristics to polymeric micelles, encapsulation in polymeric micelles may be a promising technology to prolong the circulation time of therapeutic agents [39]. Similarly, the key role of PEGylated-based micelles was described by Zhang et al. who successfully prepared a novel redox-responsive-nanoparticles (MPSSV-NPs) via self-assembled of PPM-vitamin E conjugate and a PEG derivative of linoleate (mPEG2000-LA) in aqueous solution. The pharmacokinetics of PSSV-NPs and MPSSV-NPs have displayed a prolonged circulation time with an elimination phase half-life (t1/2) of 3.339 and 30.04 h, respectively, compared to PPM with 0.327 h [40]. 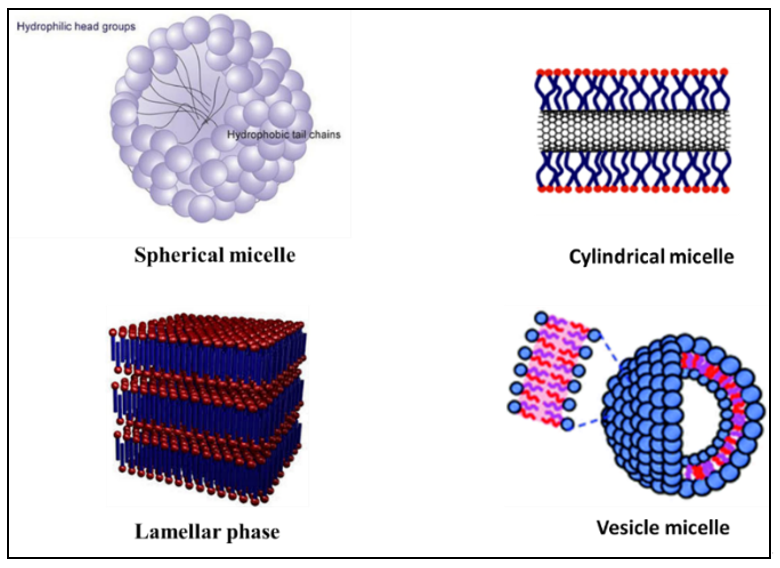 Figure 2. Illustration of some different self-assembled micelles structure. Reprinted with permission from [41]. Copyright © 2017, The Royal Society of Chemistry.