Epithelial–mesenchymal transition (EMT) is a process that is crucial for embryogenesis, wound healing but also malignant progression. EMT leads to the changes in cell–cell and cell–ECM interactions, that allow the migration of epithelial cells and confer them to the mesenchymal phenotype

Epithelial–mesenchymal transition (EMT) is a process that is crucial for embryogenesis, wound healing but also malignant progression. EMT leads to the changes in cell–cell and cell–ECM interactions, that allow the migration of epithelial cells and confer them to the mesenchymal phenotype [1]. The process can be reversed and it is called a mesenchymal–epithelial transition (MET) and is associated with the colonization of distant organs and the formation of metastases [2].

The most important steps are changes in the cell polarity, cytoskeleton and adhesion to other cells and the basement membrane (Figure 1). This allows cells to invade local structures and migrate to distant localizations. Moreover, by undergoing an EMT, carcinoma cells can acquire stem-like cell capabilities such as unlimited self-renewal [3]. EMT is characterized by the downregulation of E-cadherin and the upregulation of N-cadherin and proteases including matrix metalloproteinases such as MMP2 and MMP9 [4]. The most important transcription factors initiating EMT are SNAIL, TWIST, and ZEB. EMT transcription factors regulate the expression of multiple miRNAs [5]. One of the targets of ZEB1 is miR-34a, which regulates multiple properties of tumor cells, including cell migration and invasiveness [5]. 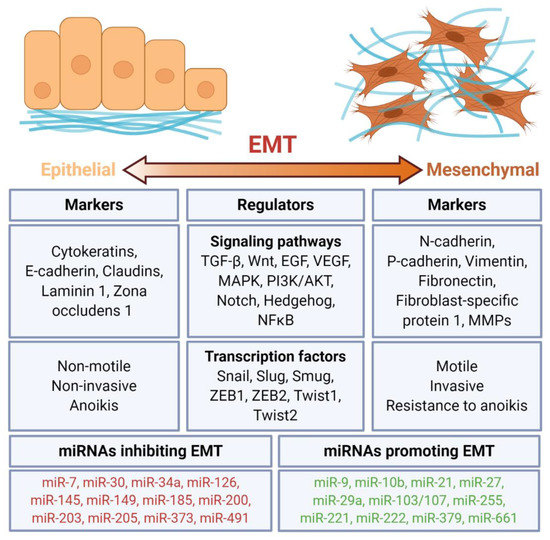 Figure 1. Regulation of epithelial–mesenchymal transition (EMT) by miRNAs. EMT is a process of the acquisition of the mesenchymal features, including motility, invasiveness, and resistance to anoikis of epithelial cells. It is regulated by multiple signaling pathways and transcription factors. Several miRNAs have been identified as either inhibiting or promoting EMT. Created with Biorender.com

All components of EMT signaling pathways are regulated by miRNAs post-transcriptionally [4] (Table 1). In general, EMT is promoted by oncomiRs and inhibited by tumor suppressor miRNAs (Figure 1). A group of oncromiRs called pro-EMT miRNAs promote EMT, tumor cell invasiveness, migration, and metastasis. For example, miR-9 and miR-92a bind to CDH1 which encodes E-cadherin [6]. MiR-10a promotes tumor cell migration and invasion by regulating EMT [7]. In cancer, the maturation of miR-10a is accelerated by XRN2, which leads to increased EMT and metastasis [8]. On the other side, the most important negative regulators of EMT are the miRNA-200 family members. MiR-200s target central regulators of EMT, ZEB1, and ZEB2 [9]. Similarly, miR-22 inhibits EMT via targeting EMT inducer SNAIL and ECM-remodeling MMP14, leading to the suppressed tumor growth, dissemination, and metastasis [10]. MiR-122 triggers a reverse process to EMT, mesenchymal–epithelial transition (MET), and causes cytoskeleton disruption, enhances cell adhesion, and inhibits the migration and invasiveness of cancer cells [11]. A similar effect was exerted by miR-200 family members that induced MET in cancer cell lines [12].The transformation of the growth factor-β (TGF-β) pathway is key signaling inducing EMT. Moreover, TGF-β controls other processes crucial for cancer progression including tumor cell proliferation and invasion. It was shown TGF-β regulates miRNAs expression but is also a target of miRNAs. Several miRNAs were described to be implicated in TGF-β-mediated EMT [13]. Among them, the miR-34 and miR-200 family seem to play the most important role as they form two negative feedback loops with transcription factors involved in EMT. MiR-34 participates with SNAIL1 with the first negative feedback loop and controls the initiation of the EMT process. TGF-β downregulates members of the miR-200 family by the methylation of their promoters and forms an autocrine TGF-β/miR-200b feedback loop. Thus, TGF- β induces EMT by miR-200/ZEB interaction [14]. TGF-β downregulates the expression of miR-584, a negative regulator of PHACTR1 (phosphatase and actin regulator 1), which in turn leads to actin rearrangement and cancer cell migration [15]. Moreover, TGF-β regulates miRNAs targeting adhesion genes [16].

Another crucial signaling pathway for tumor cell invasiveness and metastasis is Wnt/β-catenin. β-catenin-dependent canonical Wnt signaling regulates cell proliferation as well as the development and promotion of EMT, tumor cell invasiveness, and metastasis [17][18]. In the absence of Wnt, β-catenin forms a complex with the tumor suppressor adenomatous polyposis coli gene product (APC), glycogen synthase kinase 3 (GSK3), Axin, and casein kinase 1 (CK1) and is phosphorylated by CK1 and GSK3, which leads to the constant proteasomal degradation of β-catenin. After stimulation with the Wnt ligand, axin is recruited to the membrane complex of the Frizzled (Fz) receptor, low-density lipoprotein receptor-related protein 5 (LRP5) or LRP6 and the scaffolding protein Dishevelled (Dvl), which inhibits the phosphorylation of β-catenin, leading to its stabilization and accumulation in the nucleus [19]. Canonical Wnt signaling is regulated by multiple miRNAs. Wnt1 ligand is targeted by miR-122 [20], miR-148a [21], miR-148b [22], miR-152 [23], miR-329 [24]. Similarly, β-catenin is a target of multiple tumor suppressor miRNAs including miR-33a [25], miR-214 [26], miR-200c [27], miR-320a [28]. WWOX, a β-catenin inhibitor, is targeted by an oncogene, miR-153 [29]. The systemic administration of the miR-153 inhibitor suppressed the development of hepatocellular carcinoma in mice, while tumor cells with upregulated miR-153 expression exhibited increased growth [29]. The expression of miR-374a promotes cell migration and invasiveness by targeting crucial negative regulators of Wnt/β-catenin, including WIF1, PTEN, and WNT5A [30]. Moreover, other components of the Wnt signaling pathway are regulated by miRNAs, including Frizzled-7 by miR-27a [31], LRP6 by miR-202 [32] and miR-432 [33], axin 2 by miR-107 [34], and axin 2 and GSKβ by miR-1246 [35]. Altogether, miRNAs are important regulators of EMT and may either promote or suppress it by targeting different factors (Table 1).