Radial neuron migration in the developing cerebral cortex is a complex journey, starting in the germinal zones and ending in the cortical plate. In mice, migratory distances can reach several hundreds of microns, or millimeters in humans. Along the migratory path, radially migrating neurons slither through cellularly dense and complex territories before they reach their final destination in the cortical plate.

The cerebral cortex is a highly complex structure involved in higher cognitive functions such as language, reasoning, and problem solving. Importantly, most cortical neurons are generated and migrate to their final destination during embryonic stages. These processes rely on the orchestration of multiple cellular and molecular mechanisms. Disruption of any of these mechanisms can have devastating consequences and result in a vast array of neurodevelopmental disorders. For instance, it is now widely accepted that autosomal recessive primary microcephaly (a condition in which an individual is born with a smaller brain) originates from anomalies in embryonic neural progenitor survival and proliferation [1]. This conclusion holds true for microcephaly induced by genetic mutations or by environmental factors such as the Zika virus [2][3]. Emerging evidence also links autism to embryonic developmental defects. Mapping autism-linked genes to co-expression networks, two back-to-back studies concluded that autism-linked genes highly converge towards specific embryonic stages, during which neurons are generated and migrate to their final destination [4][5]. Moreover, post-mortem histological analyses of autistic children showed focal aberrant neuron organization in certain cortical areas [6]. Since the vast majority of cortical neuronal populations are generated and are topologically organized during embryonic development, these data point to neurodevelopmental deficits occurring prenatally. Many other neurodevelopmental disorders may arise, at least in part, from aberrant embryonic corticogenesis. Amongst them are lissencephaly, megalencephaly, schizophrenia, Rett Syndrome, intellectual disorders, and Down syndrome [7]. Thus, there is a need to better understand mechanisms regulating cortical development during embryonic stages. This knowledge is critical to define the etiology of neurodevelopmental disorders.

One particular cell type, radial glia, plays pivotal roles in the formation of the cerebral cortex. Radial glia not only generate neurons and glial cells through cell division, they also guide neurons migrating radially from their birthplace to their final destination. In fact, radial glia’s guiding function was demonstrated prior to their role as neural stem cells [8][9][10][11].

2. Radial Migration in the Cerebral Cortex

Neuron migration is an active process during which neurons sense cues in their environment to direct their migration. In response to these cues, a choreography of cytoskeletal rearrangements leads to morphological changes enabling the migration process per se. Radially migrating neurons start their migration immediately following their birth in the germinal zones lining the ventricle of the dorsal forebrain. For neurons born in the ventricular zone (VZ), the first migratory step consists of delamination from the VZ into the overlying subventricular zone [12] (SVZ, Figure 1). Following delamination, these neurons, as well as those born in the SVZ, spend a brief period in the SVZ where they assume a multipolar morphology. This switch to a transient multipolar morphology is an important step enabling slight tangential dispersion necessary to establish appropriate cortical columns circuitry [13][14]. Following this brief tangential migration, neurons migrate away from the progenitor zones in a radial fashion to populate the cortical plate (CP) (Figure 1).

During early stages, neurons use somal translocation to accomplish their migration. Somal translocating neurons present a long leading process that reaches to the pial surface. Within this leading process, their nucleus migrates into the CP to eventually reside in its final position [15]. However, at later stages (around the time when upper-layer neurons start being produced) neurons rely on glia-guided locomotion, which depends on direct interaction with radial glia [8][15]. During later developmental stages (embryonic day 14 in the mouse (E14), E65 in the macaque monkey, gestational week 12 in humans), the distance between the birthplace of neurons and the CP is too far for those neurons to extend a leading process reaching the pial surface [16][17]. Moreover, electron microscopy studies show that at later stages, migrating neurons must cross territories with high cellular density [8][17][18]. Firstly, neurons need to cross the intermediate zone (IZ), packed with axonal fibers oriented both radially and tangentially (Figure 1a). Once neurons have crossed the IZ, they need to find their way through the subplate containing Cajal–Retzius neurons and then through the CP, in which the extracellular space is extremely limited due to a high density of neurons (Figure 1a). To overcome this complex task, neurons rely on other cells to create a path and guide them through these diverse and densely populated tissues.

One of these guides is the radial glia basal process. Throughout corticogenesis, radial glia extend a basal process spanning the entire thickness of the developing cortex and ending with basal endfeet connected to the basal lamina (Figure 1). Early electron microscopy studies highlighted an intimate relationship between migrating neurons and radial glia basal processes in the cerebral cortex, suggesting a scaffolding role for radial glia during neuronal migration [8]. Such interactions were initially supported by the live imaging of cerebellar neurons migrating along glial fibers in vitro [9]. In such experiments, neurons were described as “riding the glial monorail” [19]. More recently, live imaging in organotypic brain slices confirmed the existence of glia-guided migration in the cerebral cortex [15]. At the end of radial migration, the endfeet-mediated connection of the basal process with the basal lamina is critical to prevent neurons from migrating outside the brain. Thus, like Ariadne’s thread guiding Theseus in the Minotaur’s labyrinth of ancient Greek mythology, radial glia basal processes are critical to guide migrating neurons through the labyrinth of the developing cortex (Figure 1). 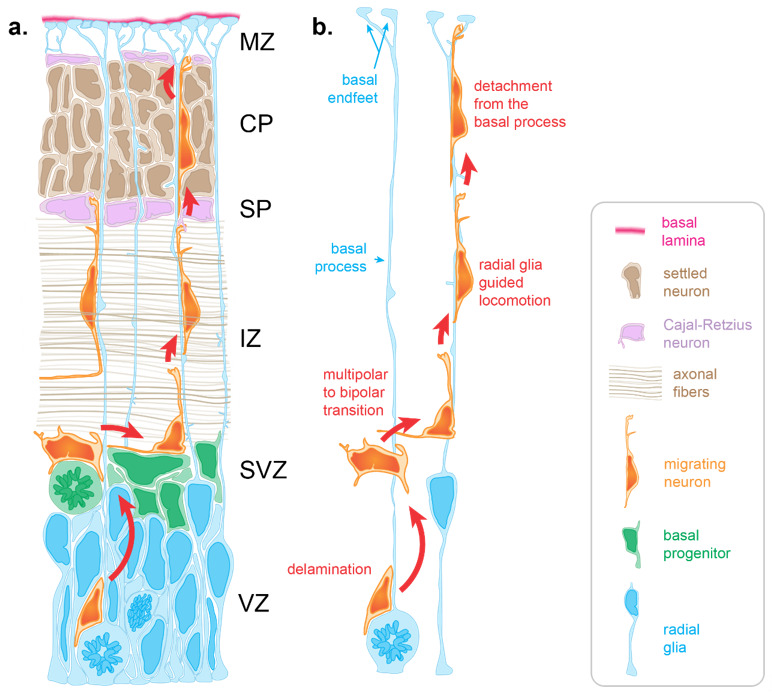 Figure 1. Radial migration in the developing cortex. (a) Radial migration relies on the radial glia basal process for guidance. Immature neurons born at the apical surface of the developing cortex use the basal process to navigate through varied and densely packed histological layers before resting in their final location within the cortical plate (CP). (b) Neuronal migration occurs in several key stages. Delamination from the ventricular zone (VZ) brings the newly differentiating neuron to the subventricular zone (SVZ), where it adopts a multipolar morphology allowing for brief tangential migration. Recognition of the radial glia basal process by the migrating neuron drives a transition to a bipolar morphology as basal process–neuron interactions enable radial glia to guide radial migration. Glia guided locomotion is necessary for the neuron to negotiate the compact layers of settled cortical neurons. Once the neuron is properly positioned, termination signaling leads to detachment from the basal process. (IZ: intermediate zone, SP: subplate, MZ: marginal zone).