Bioprinting is a printing technology that prints cells together with the biomaterial, usually a hydrogel, known as a bioink . By including the capability of stimuli responsiveness, four-dimensional (4D) printing has emerged as an intriguing technology able to induce planned changes of the constructs (e.g., shape, stiffness) when triggered by a certain external stimulus , thus showing the potential of bridging the gap between the laboratory constructs and native human tissues.

The main scope of tissue engineering (TE) is defined as the set of processes to develop biological structures that are able to restore, maintain, or even improve the function of tissues and/or organs [1]. Aiming to meet this challenging goal, multidisciplinary teams are required to work together in the fields of materials engineering and life sciences [2], to successfully employ scaffolds, growth factors, and cells, which represent the widely famous three pillars of TE. Initially, devices were mostly produced from bioinert materials, aiming to achieve adequate mechanical properties, inducing minimal responses from the host tissues. Then, bioengineered constructs were designed to provoke planned reactions at the implant site and follow a certain degradation rate. More recently, there has been emergent research on using smart materials to support and stimulate a better-mimicking tissue with high multicellular functionality [3][4][5][6].

Three-dimensional (3D) printing has appeared as a useful technique for TE scaffolding to develop constructs with high control over structure geometry and architecture [7][8]. Its first appearance was reported in 1986 by Hull et al., who used a novel technique called stereolithography [9], able to fabricate 3D structures by curing a resin with a UV source in a layer-by-layer fashion. Throughout the years, several other 3D printing techniques have been developed (Figure 1), e.g., fused deposition modeling [10], selective laser melting [11], and selective laser sintering [12]. All of these share a great advantage over conventional scaffolding techniques, namely, the ability to use computer assisted design – computer assisted manufacturing (CAD–CAM) to customize constructs, and obtain replacements with topologies optimized by using medical imaging approaches [13][14]. However, conventional 3D matrices have revealed not to be the optimal approach for a number of clinical needs, e.g., tissue defects that change faster than tissue healing, regenerative processes that could be stimulated by electrical or mechanical inputs, body environments in which physicochemical conditions, such pH and temperature, may change over time. 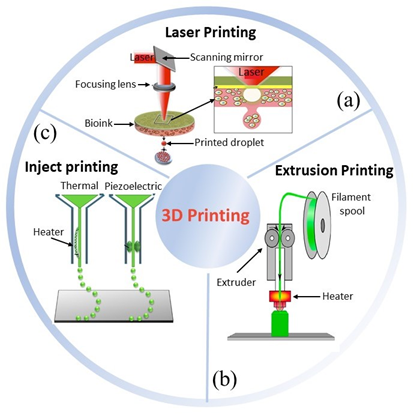 Smart biomaterials are at the basis of 4D printing, which, for biomedical applications, may also include printed live cells, thus being defined “bio”-printing [19]. Such materials can change shape or properties (e.g., stiffness, color, texture, transparency, energy transfer/conversion, volume) under the influence of external stimuli. Therefore, a clever use of such materials will result in 3D-built scaffolds that can adapt their features to specific applications [20][21]. As an innovative field, 4D (bio-)printing is suggested to be a promising tool to obtain effective TE therapies in a large number of clinical applications [22].

4D printing is the latest advancement in the advanced manufacturing field [23]. It was initially defined as a procedure where the shape, properties, or functionality of a 3D printed structure can change according to time and/or stimuli (Figure 2) [24]. The foundational works were developed at the Massachusetts Institute of Technology (MIT), by considering time as the fourth dimension [25]. Given this, 4D (bio-)printing indicates that for the transition, over time, the 3D printed biocompatible materials may incorporate live cells by using bioinks [22]. Thereafter, sequential approaches have been applied to the concept of 4D (bio-)printing, according to the identified stimuli concurring to defined biomedical applications. The first approach to 4D printing closely followed the MIT concept, in which the material (e.g., smart biopolymer or responsive hydrogel), under the desired stimulus, folds in a predefined 3D configuration, and cells or tissues simply follow the substrate fold and form the desired shape. The second approach is the “in vivo 4D bioprinting” in which a 3D polymer is printed, acting as a medical device, initially implanted to accommodate tissue or organ growth after the postsurgical period. When the tissue or organ gets stronger, the scaffold degrades gradually, preferably in a controlled manner, and is absorbed by the body. In this approach, tissue growth can be viewed as a leading stimulus. However, considering 3D printed scaffolds under the 4D printing umbrella because of their biodegradation property (i.e., controlled biodegradation as a shape change over time), is utmost controversial [26]. Figure 2. Illustrative diagram representing addition of a predesigned stimulus to promote a desired change at the construct. [Original image from the authors].

An et al. proposed a definition for 4D bioprinting, referring to groups of programmable self-assembling, self-folding, or self-accommodating technologies, which include three main defined or essential components: (i) man-made and not nature-made programmable design, (ii) two dimensional (2D) or 3D bioprinting process, and (iii) postprinting programmable evolution of bioprinted constructs that can be driven by cells or biomaterials and triggered by external signals [25].

The main advantageous characteristics of 4D bioprinting include additional degrees of freedom in terms of design, high precision cell placement, and the ability to produce tissues with adequate cellular density [23]. Many 3D printed scaffolds with programmable biodegradation fit within this definition, but are beyond the topic of this review. So far, a widely accepted definition of 4D printing is still missing, as from Moroni et al.: “Whether we are really witnessing 4D printing, a process that should be defined as a programmed temporal shape change occurring during the 3D manufacturing itself, or not, is still to be clarified in the field” [27]. In this scenario, many researchers are investigating different materials and approaches enabling controllable shape/property changes upon different stimuli and timeframes, which are suggested in this review under the name of 4D (bio-)printing.

A category that naturally suits the 4D (bio-)printing concept is the printing of smart hydrogels [28]. Hydrogels are polymeric networks able to form water-swollen structures thanks to different types of forces between the polymer chains, leading to semi-crystalline or amorphous materials [29][30]. Smart hydrogels are able to respond to a desired stimulus (e.g., shear stress, electricity, ionic force, light, magnetic field, pH, temperature). The interest in developing smart hydrogels has been increasing within the last years, as they should be able to provide remarkable characteristics, such as shape memory, self-healing and controllable sol-gel transition. Thus, being able to use the advantages of 3D (bio-)printing (e.g., customization), it is possible to improve the features of hydrogels by promoting self-weldability or self-unfoldability according to an external stimulus. As discussed in literature, both these characteristics, as 4D bio-origami hydrogels, may significantly contribute to achieve functional tissues [23], and to the fabrication of engineered tissues, such as liver [31] and heart [32], making a major breakthrough in the area of TE [33]. Extensive research has been carried out on the development of smart hydrogels. From a mechanical standpoint, hydrogels can show bare elastic up to viscous–elastic behavior, because of crosslinking type and density. To characterize hydrogels, Young’s modulus (E), storage modulus (G′), and loss modulus (G″), as well as other hydrogel-specific parameters, such as mesh size, polymer volume fraction in the swollen state, and average molecular weight between crosslinks, should be evaluated. Since water does act as a plasticizer among the polymer chains, hydrogels used in their swollen state, as in TE, are well above their glass transition temperature (Tg) and show viscoelasticity under loading conditions. For example, appropriate mechanical stimulation and biomechanical signals are key factors in tendon/ligament (T/L) engineering. As the native T/L is able to respond to mechanical forces by changing structure, composition, and mechanical properties [34][35][36], smart hydrogels obtained via 4D printing cold help to achieve such a critical goal. Typical mechanical values of hydrogels (e.g., ≈0.1 MPa Young’s moduli) are usually far from satisfying T/L mechanics (i.e., 1.2–1.8 GPa tensile modulus) that can be achieved only by high modulus chemically crosslinked hydrogels [37][38]. Moreover, transition zones of T/L into muscle or bone need a gradient of properties capable of responding to personalized tissue mechanics.

As the field of 4D (bio-)printing continues to grow, in the next years it is expected to rapidly expand across fields, including regenerative medicine, robotics, and medical devices [39].