The ligand of Numb protein-X (LNX) family, also known as the PDZRN family, is composed of four discrete RING-type E3 ubiquitin ligases (LNX1, LNX2, LNX3, and LNX4), and LNX5 which may not act as an E3 ubiquitin ligase owing to the lack of the RING domain.

Protein ubiquitylation, which is a highly conserved post-translational modification in which ubiquitin (consisting of 76 amino acids) is covalently linked to lysine residues of a substrate protein, is associated with nearly all aspects of eukaryotic physiology. The number of genes encoding proteins involved in ubiquitin-dependent post-translational modification in humans is estimated to be over 1000, which far exceed the total number of kinase-encoding genes (518) identified thus far[1][2]. Protein ubiquitylation comprises a series of enzymatic reactions that initially uses energy from ATP hydrolysis and is mediated by ubiquitin-activating enzyme (E1), ubiquitin-conjugating enzyme (E2), and ubiquitin ligase (E3), which ultimately render substrate specificity[3][4]. E3 ubiquitin ligases can be classified into three groups based on the presence of discrete domains. While HECT family of E3 ubiquitin ligases acts as a genuine enzyme by exploiting its catalytic cysteine residue located in C-terminal HECT domain, the E3 ligase with RING or U-box domain serves as a scaffold that recruits the E2 enzyme in close proximity to the bound substrate. While protein turnover mediated by the UPS is essential for cellular proteostasis, nonproteolytic ubiquitin modification is important for the regulation of epigenetic control, transcriptional regulation, cellular trafficking, and post-translational modification[5]. The presence of extracellular 20S proteasome in blood plasma and cancer cell culture conditioned media indicates the complexity of proteostasis[6]. Therefore, it is not surprising that UPS dysfunction is associated with multiple human diseases. Thus far enormous efforts have been dedicated to understanding the pathophysiological roles of individual E3s because the complexity of the UPS mostly stems from multiple substrates or diverse cellular roles of a single substrate of an E3 ubiquitin ligase[7][8].

Here we describe one of the multifunctional E3 ubiquitin ligases family, ligand of numb protein-X (LNX/PDZRN). Among the five members of the LNX family (LNX1-LNX5), LNX1-LNX4 may function as E3 ubiquitin ligases that target miscellaneous substrates for ubiquitylation, as these possess a RING domain with multiple PDZ (PSD95, DLGA, ZO-1) domains, each of which are considered protein-protein interacting modules[9][10][11][12][13]. Although over 600 E3 ubiquitin ligases are encoded in the human genome[1], LNX proteins belong to the sole E3 ligase family with multiple PDZ domains (up to four); therefore, it is not surprising that members of the LNX family appear to interact promiscuously with various different proteins[14][15][16][17]. Among the LNX proteins, two were originally named LNX1 (also called PDZRN2) and LNX2 (PDZRN1) owing to their ability to bind to NUMB, an intracellular Notch inhibitor[18] via relatively well-conserved NUMB-binding motifs (NPAY in LNX1, NPAF in LNX2) located between the RING domain and the first PDZ domain; the consensus sequences from these are not present in other members of the LNX family. Thus LNX3, LNX4, and LNX5 are more prone to be referred to as PDZRN3, PDZRN4, and PDZRN5 (or PDZRN4L), respectively though (PDZRN; PDZ and RING)[9][17][19][20][21], we will collectively call the several synonyms of LNX/PDZRN/SEMCAP as LNX hereafter.

Although considerable efforts have been devoted during the last two decades to elucidating the function of LNXs, our knowledge of their substrates, binding partners, pathophysiological functions, and detailed molecular mechanisms of action of LNX proteins remains elusive. As an indication of the increased interest in this area of research, an excellent review article published in 2018[17] comprehensively discussed the role of LNX1 and LNX2 in various diseases. Therefore, in this review, after primarily emphasizing novel discoveries on LNX1 and LNX2 in the last three years, we will focus on findings of the cellular and pathogenic roles of LNX3 and LNX4, and then discuss what major questions remain to be tackled.

Although the complete X-ray crystallographic structure of LNX proteins is not available, fragmented structures of LNX1p80 and LNX2 are published on various web sites and in the literature. According to previous reports based on the available X-ray crystallographic structures, the N-terminal three-dimensional structures of LNX1 and LNX2 show the presence of a single RING domain with two Zn finger motifs flanking the ends of the RING domain (Zn-RING-Zn fragment), and LNX2 s PDZ domain[22][23][24]. Structural information on the other parts of individual PDZ domains of LNX1 (PDZ2 and PDZ3) are also available in the Protein Data Bank (PDB; http://www.rcsb.org). In 2018 Young[17]provided a detailed account of the structural information of LNX1 and LNX2 that is available. The predicted amino acid sequences and primary structures of human LNX proteins, with domain annotations, are shown in Figure 1. RING-type E3 ubiquitin ligases tend to form homodimers or heterodimers to acquire enzymatic properties, though some act as monomers[25]. Although both LNX1 and LNX2 Zn-RING-Zn fragments could be homodimerized, homodimerization is exclusively required for LNX1 to function as an E3 ubiquitin ligase, while the monomeric status of LNX2 is sufficient for the retention of its auto-ubiquitylation activity[22][24]. 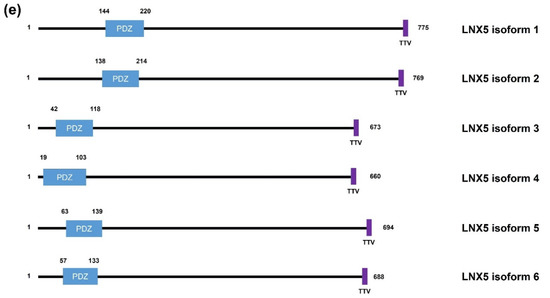 The possible formation of an oligomer or heteromer between LNX1 and LNX2 may be considered if we take into account the existence of multiple PDZ domains and class I PDZ-binding motifs (S/T-X-V/I/L) at the C-termini of both proteins (Figure 1a,b). The oligo- or heterodimeric complex formation was validated in yeast two-hybrid experiments, where the presence of C-terminal class I PDZ-binding motifs were a prerequisite for studying their intermolecular interaction[9]. However, whether the Zn-RING-Zn domains of both LNX1 and LNX2 can mediate heterodimerization has not been investigated thus far. Collectively, the dimerization sites in LNX1 and LNX2 may exist in at least two different positions: in the N-terminus containing the RING and Zn finger motifs, and in the PDZ domains. The proposed concepts were strongly supported by the finding that while the introduction of multiple mutations in the gene encoding the isolated Zn-RING-Zn domain was adequate to disrupt homodimerization of the fragments, when introduced in the genes encoding full-length LNX1 and LNX2 the same mutations failed to prevent dimerization [22][24]. Additionally, the intramolecular loop of the C-terminal class I PDZ-binding motifs could also have bound to the second PDZ domains (class I PDZ domain is able to bind S/T-X-C) of LNX1 and LNX2[15]. Therefore, their intrinsic E3 ubiquitin ligase functions were regulated at the intramolecular level, and could be further modulated by post-translational modifications, such as by the attachment of phosphate moieties. Thus far, only a single protein kinase (c-Src) has been reported to mediate LNX1p80 phosphorylation[26]. In addition, since LNX family besides LNX5 has several Zn ion coordination sites, it would be encouraged to establish the optimal level of Zn ion to achieve as fully active recombinant proteins as possible in vitro by following well established experimental procedures[27][28].

Besides LNX5, the remaining members of the LNX family (PDZRN3 and PDZRN4) contain an N-terminal RING domain and two tandem repeat PDZ domains (Figure 1c–e). While PDZRN3 contains a Zn finger motif at the C-terminal end of its RING domain[29], the presence of this motif in PDZRN4 could not be confirmed, although PDZRN4 does contain a SINA-like domain that may incorporate a Zn ion. Interestingly, the sequences of all members of the LNX family (except LNX1 and LNX2), including their variants, end with a TTV segment, which is also a type of class I PDZ-binding motif. Therefore, LNX1 and LNX2 might interact with other LNX proteins via their PDZ domains and C-terminal class I PDZ-binding motifs. Alternative assumptions might be also possible, considering the structural homology could be inferred from the level of amino acid sequence similarity. Strikingly by pairwise comparison of the individual members of LNX/PDZRN family (Figure 2), we only observed the high sequence similarities between LNX1 and LNX2, and LNX3 and LNX4. While LNX1 and LNX2 as their names imply share some substrates (Table 2) including Numb for ubiquitin dependent modification, LNX3 (PDZRN3) and LNX4 (PDZRN4) though their overlapping targets has not been reported yet would possibly be complementary to each other at least in part under the particular cellular contexts by sharing common substrates. To clarify the unique or overlapping molecular and cellular functions of the individual LNX proteins, their mutually complementary roles on possible target proteins must be scrutinized through future studies.

Figure 2. Amino acid sequence comparison of human LNXs (a) Phylogenetic tree of the LNX proteins. Maximum likelihood analysis was performed using to RAxML under the LG+GAMMA model. Analysis was carried out with five LNXs encoding the longest of their own variants (LNX1p80, LNX2, LNX3 isoform 1, LNX4 isoform 1, and LNX5 isoform 1). The numbers on each node represent bootstrap supported values. The scale bar indicates the number of substitutions/site. (b,c) Homology comparison of each domains was highlighted by the value of percentage. (b) Pairwise comparison between LNX1 and LNX2. The scale bar on the top indicates the approximate numbers of amino acids for the comparison of individual proteins. (c) Pairwise comparison between LNX3 (PDZRN3) and LNX4 (PDZRN4).