PE and PVC Polymer nanocomposites used in underground cables have been of great interest to researchers over the past 10 years.

Due to their reliability, availability, ease of fabrication, and low cost, polymers have been widely used as electrical insulating materials for underground cables since the early 20th century [1]. In general, polymers are defined as macromolecules consisting of many repeating units called monomers. On the basis of intermolecular forces acting within their chains, polymers can be classified into three main classes: elastomers, such as natural rubber and polyurethane; thermosets, such as epoxy resins; and thermoplastics, such as polyethylene (PE) and polyvinyl chloride (PVC). PE and PVC are considered the most commonly synthetic polymers used as electrical insulating materials due to their low permittivity and high electrical breakdown strength [2]. PE can be found in several forms: high-density polyethylene (HDPE), low-density polyethylene (LDPE), linear low-density polyethylene (LLDPE), and cross-linked polyethylene (XLPE) [1][2].

The commercial homo-polymer form of HDPE (with density ranged from 0.941–0.959 g/cm3) is a linear polymer that contains 94% crystalline phase and 6% amorphous phase [3]. Its low chemical reactivity, stiffness, impermeability, thermal stability, and moisture resistivity reveal HDPE to be applicable in electrical insulation [4][5][6].

Compared to HDPE, LDPE with lower density (0.910–0.925 g/cm3), lower chemical reactivity, and lower tensile strength, due to the presence of short and long branched chains [7], is widely used in the fabrication of cables for high-voltage direct-current (HVDC). Further, LDPE can withstand a temperature of 95 °C for a short time and has a higher resistance to dilute, concentrated acids, and bases than many other organic compounds. Nevertheless, it has poor resistance to halogenated hydrocarbons [8].

In addition to LDPE, LLDPE was also used in the insulation of wires and cables for low, medium, and high voltage applications. It was first commercialized in the 1970s by Union Carbide and Dow Chemical. The main difference between LLDPE and LDPE is that the former has a narrow molecular weight distribution and no long chain branching, therefore it has higher tensile strength and puncture resistance than LDPE [7]. Its density (0.926–0.940 g/cm3) is higher than that of LDPE [9], and since it is a saturated hydrocarbon, like polyethylene, it is generally unreactive; it resists alcohols, alkaline solutions, weak organic or inorganic acids, and saline solutions [7][10][11].

Due to the drawbacks of PE; the limitation of the maximum operating temperature (70 °C) and its deterioration due to the absence of antioxidants, a new type of PE was introduced by crosslinking the PE in order to improve its thermal and aging stability [12][13]. Cross-linked polyethylene (XLPE) is typically a modified HDPE, with permanently chemically linked polymeric chains. The crosslinking proceeds through the chemical reaction of polymeric chains with materials possessing multifunctional groups, which join the polymeric chains together through chemical bonds, forming a three-dimensional dense network, thermosets polymers, with totally different properties, such as their chemical structure and resistance, and their mechanical performance (environmental stress, toughness, abrasion and crack resistance), and chemical resistance [14][15][16]. Depending on the degree of crosslinking, XLPE has been used in several applications, e.g., electrical insulation, pipes, and packaging [12][13][17][18].

In addition to polyethylene and its different forms, polyvinylchloride (PVC) is another thermoplastic polymer used in electrical insulation. It has excellent fire resistance due to the presence of chlorine, which made it one of the most widely produced synthetic polymers [2], with multiple applications in pipelines, ducts, and electrical insulation. PVC is produced in a rigid or flexible form; the latter being preferred for electrical insulation. Despite high hardness and good mechanical properties, PVC starts to decompose at 140 °C, however, its thermal properties may be improved by the addition of heat stabilizers [19][20].

Recently, nanodielectrics have been developed for many applications. Nanodielectrics are polymer dielectrics filled with a certain weight percent (wt%) of inorganic nanoparticles homogeneously dispersed in the polymeric matrix. Such materials, containing low concentrations of nanoparticles, exhibit promising enhancement of their electrical, mechanical, and thermal properties compared to conventional materials [21][22][23]. This enhancement is largely due to the large surface area per unit volume of the nanoparticles. Nanodielectrics can also act as multifunctional materials: controlling the elevation and cryogenic in temperature, controlling the thermal conductivity for the insulators, and increasing the energy density of capacitor systems. This is because of the simultaneous enhancement of the above-mentioned properties [24], and consequently, they satisfy in large measure the current needs of the electrical power industry. Some examples are epoxy, polyethylene, and polypropylene nanodielectrics [25].

Polymer nanocomposites used in underground cables have been of great interest to researchers over the past years [26][27][28]. Figure 1 shows the growth of research articles in nanocomposites based on polyethylene and polyvinylchloride in the last 15 years according to the Web of Science database. It is clear that there is an increasing trend in the number of research articles covering this topic, which indicates the importance of this topic for the academy and industry. The preparation and the dispersion of the nanoparticles through the polymer host matrix are the key factors leading to the enhanced dielectric properties of polymer nanocomposites used in underground cables. Their important dielectric properties are breakdown strength, dielectric loss, space charge accumulation, tracking and erosion, and partial discharge. We discuss these properties in this article. 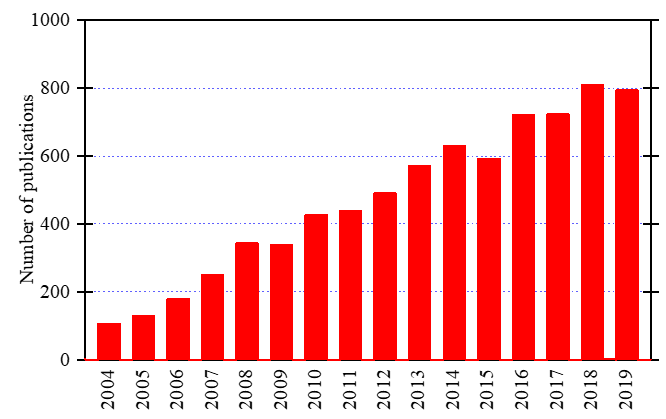 Figure 1. Annual publications on nanocomposites based on polyethylene and polyvinylchloride according to Web of Science database.

The type, size, and surface morphology of the nanoparticles are the critical factors in enhancing the properties of polymer nanocomposites. Nanoparticles may be obtained through various preparation techniques, e.g., sol-gel [29], chemical precipitation [30][31], and electrode deposition [32][33]. The selection of the appropriate method depends on the physical and chemical characteristics of the host polymer matrices. The most common nanoparticles dispersed in insulating polymeric hosts are clay, silica (SiO2), titania (TiO2), alumina (Al2O3), and other metal oxides. The benefits of nanoparticle dispersion are realized when the dispersion is uniform, with little particle agglomeration.

The overall physical and chemical properties of polymer nanocomposites are controlled by the properties of both nanoparticles and polymers, the interactions between them, and the polymer/nanoparticle interface [34]. It is reported that at this interface there is a fraction of polymer is confined and grafted at the highly surface-area nanoparticles, thus, there is a gradual transition of the physical and the chemical properties from “bulk” matrix-controlled features to interphase or “surface” dominated characteristics [35]. Therefore, the unique structure of this special region has dominated influence on the electrical and mechanical properties of the nanocomposite materials, and its influence becomes more significant in nanocomposites with larger interfacial areas compared with microcomposites [36]. In order to observe such an influence, a uniform dispersion of the nanoparticles through the polymer matrix is mandatory [35].

Unfortunately, the small size and the high surface area-to-volume ratio of nanoparticles increases their tendency to agglomerate within the polymeric matrix, introducing additional challenges compared to the preparation of microcomposites [37][38]. Agglomerations of nanoparticles are considered weak points at which destructive processes, such as electrical tree initiation or mechanical crack propagation, can occur, resulting in deterioration of the electrical, mechanical, and thermal properties of the nanocomposite.

Materials such as aluminates, silicates, and borates are often involved in linking dissimilar surfaces. The most commonly used coupling agents in polymer nanocomposites are silanes which form durable chemical bonds between organic polymers and inorganic additives in a such way, as shown in Figure 2 [48][49]. The general formula of a silane coupling agent, R–(CH2)n–Si–X3, with two functional groups, namely the inorganic moiety X, (such as alkoxy, acyloxy, halogen, and amino groups), and the organic moiety R (typically amino, epoxy, and vinyl groups). Silane coupling agents may form a covalent bond directly with the finished polymer (thermoplastic polymers) or may be copolymerized with the monomer (thermoset polymers) [50].

The effect of nanoparticle surface modification by a silane coupling agent has been investigated in detail for SiO2/XLPE nanocomposites [51]. The dielectric constant decreased for nano-sized modified SiO2, compared to micro-sized modified SiO2. This observation was explained in terms of the particle surface curvature, which is high for a nanoscale diameter, resulting in a decrease in the amount of hydrogen bonding between the silanol groups. Accordingly, the interfacial polarization and the nanocomposite dielectric constant are reduced.

There are three different methods of preparing polymer nanocomposites [52], namely in-situ polymerization, melt blending, and polymer dissolution mixing. The latter two methods are used to prepare polymer nanocomposites for use in underground cables. In the melt blending method, the polymer material is heated above its melting temperature, e.g., 135 °C for LDPE [53], and nanoparticles are then mixed with and dispersed into the melted polymer. Finally, the mixture is extruded, pressed into sheets of the required thickness, and allowed to cool to room temperature. In the polymer dissolution mixing method a suitable solvent for the host polymeric material is added, e.g., tetrahydrofuran solvent for PVC [54] and xylene solvent for LDPE [55]. Nanoparticles are then added directly to the solution or dispersed in the solvent before being added to the solution. In order to reduce the time required to obtain a homogeneous mixture and uniform dispersion of the nanoparticles, magnetic stirring and ultrasonic homogenization may be used. The resulting liquid is poured into a mold and the solvent is allowed to volatilize, either in the air over several days or in a vacuum oven for a few hours. 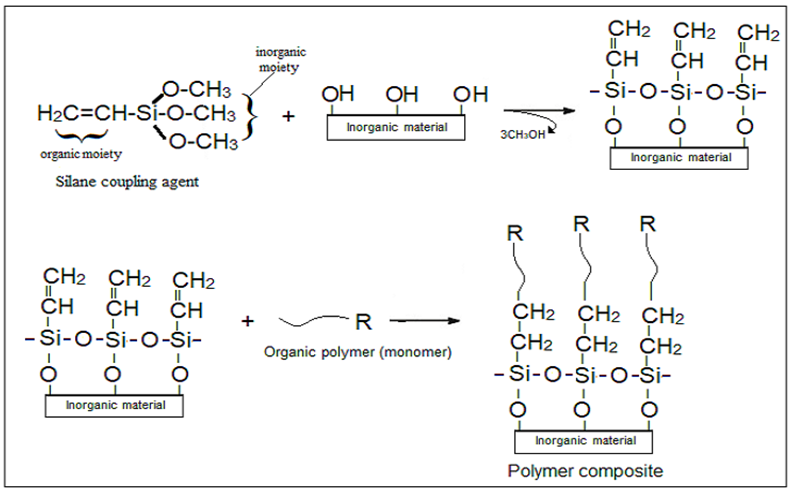 Figure 2. Synthesis of polymer composite upon functionalization of inorganic materials (such as metal oxides nanoparticles) with silane coupling.