The edge, fog and cloud computing integration has enabled plenty of Internet of Things (IoT) applications, offering high connectivity, scalability, and high availability. Smart cities, smart agriculture and e-health systems are examples of IoT applications that can take many advantages by using those technologies. However, due to the complexity of the scenarios and the heterogeneity of the devices, the management is not a trivial task. While facilitating storage and processing at the end device (the edge), at the intermediary layer (the fog), or centrally (the cloud), it also introduces new points of failure at and between each layer. In some use cases, such as e-health, device availability has a high criticality. Any downtime impacting one or more components in the architecture can result in adverse effects and/or additional logistical effort and cost. This chapter discusses decision-making strategies for maximizing availability using as example three IoT scenarios: smart city, smart agriculture and e-health systems.

For large-scale Internet of Things use cases, such as smart cities, cloud computing offers a flexible and on-demand infrastructure to execute real- time analytics applications and context-specific information systems. In addition, it also provides support for data retrieval and visualization, which can provide relevant information for city managers to create new public policies and consequently improve the city operations (Kakderi et al. 2019[1]). While cloud computing can mitigate some of the limitations of IoT devices, the location of cloud data centres can introduce issues for delay-sensitive applications. Usually, cloud infrastructures are located far away from the edge devices resulting in a high delay for both transmitting large volumes of data and providing a response (Tang et al. 2015[2]). To solve this problem, fog computing is a technology that acts between the edge devices and cloud computing. Fog computing extends the cloud capabilities providing cloud features closer to the edge devices using low cost devices but with computational capabilities needed to support local data analysis (He et al. 2017 [3]; Santos et al. 2018 [4]).

Despite the advantages that cloud-to-thing (C2T) integration technologies bring to IoT applications, its adoption also brings challenges. In such scenarios, the system relies on different operational layers to offer a variety of applications to the end-user, increasing the complexity of resource management (da Silva Lisboa et al. 2018[5]). Moreover, while improving the availability of the service as a whole, C2T solutions present more points of possible failure, for example in the IoT sensors, fog devices, and data centre subsystems. In several scenarios, system availability is critical due to strict requirements, such as real-time data health monitoring, for example patient vital data, and real-time decision making, for example rerouting due a transit accident.

Notwithstanding the opportunities inherent in smart cities, they also bring several challenges. A smart city is a mixture of multiple systems with distinct, sometimes conflicting objectives. These systems may make use of their own (devices) end-points or share municipal devices to collect data over time, many of which have no significant computational capability to store and process this data. These simple devices act as the city’s sensing layer located at the edge of the network.

An example of smart city infrastructure for traffic monitoring that integrates edge, fog and cloud computing is illustrated in Fig. 5.1. The cars and roadside units generate data about the number of cars driving on the streets, street conditions, and unexpected events, such as accidents. This information can be used to adjust the traffic lights in order to relive potential traffic congestions in and around the location of the incident. This information can be processed locally by the traffic lights (fog nodes) to reduce the delay. However, the cars and the city infrastructure could process incidents, for example car crashes, and send alerts to change the route for vehicles and give priority to city or emergency services to arrive at the scene of the incident (Ali and Ghazal 2017 [6]). 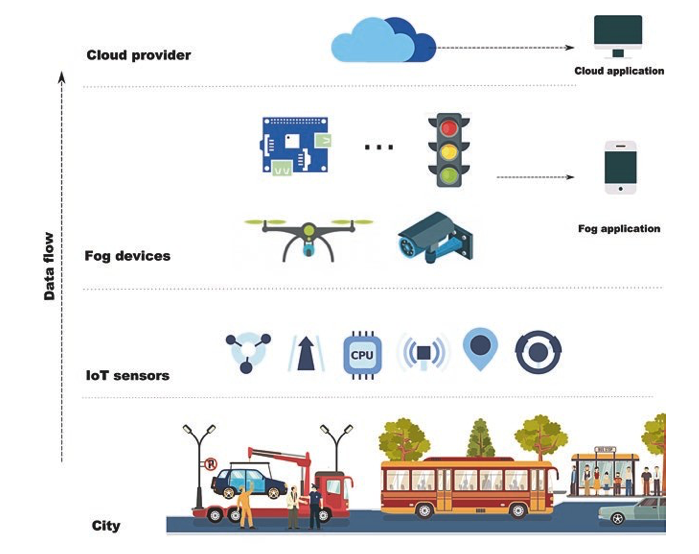 The provision of services and the availability of resources is a great challenge in smart city due to different demands, user requirements, and services specifications. For delay-sensitive applications, fog computing is a key technology since it provides cloud-like functionality close to the end-user thereby reducing the latency and increasing the application availability (Tang et al. 2015 [2]). In a smart city scenario, where a huge amount of data is generated, the fog nodes can act as a backup in case of a cloud failure, increasing the availability of the system as a whole (Stantchev et al. 2015 [7]). Finally, different redundancy mechanisms can be used between the fog applications and the cloud data centres. The edge nodes may provide more essential services in a distributed way, and in case of failures, other edge nodes can keep the service available. 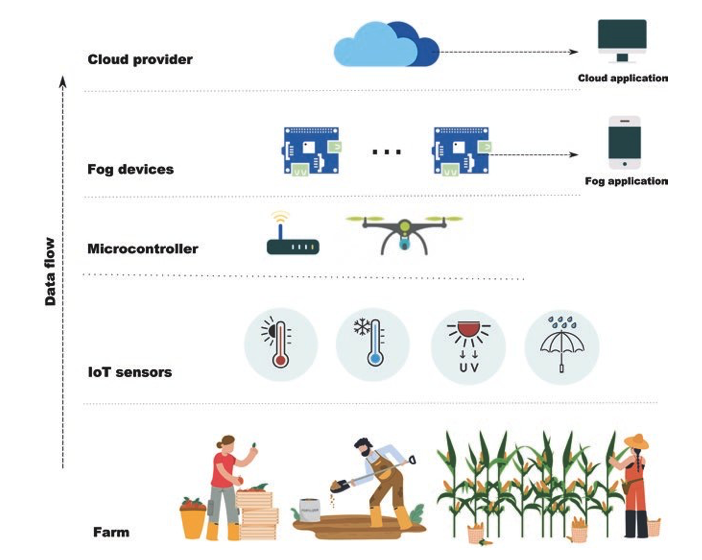 In smart agriculture, downtime can be very costly (Ibrahim et al. 2018[8]). For instance, if a temperature change is perceived but action is delayed or no action is taken, it can cause significant financial losses because the entire crop can be compromised. Downtimes can occur due to different reasons, such as sensor and actuator failure. In these cases, minimizing the system downtime becomes critical. Ibrahim et al. (2018[8]) suggest developing countries encounter high repair times as spare components are not usually stored on site and farmers may have to import them, and replacement costs are rarely predictable. Again linking, system failure and downstream replacement logistics could result in better mean time to repair metrics and mitigate financial losses.

Gatouillat et al. (2018[9]) defined the Internet of Medical Things (IOMT) as the interconnection of medical-grade devices with broader health care infrastructures, connecting personal medical devices with each other and with health care providers whether hospitals, medical researchers, or private companies. The advantages of such a vision of e-health ubiquity and interconnectivity are multifold. As well as unburdening the health system, IoMT technologies can contribute to increased efficiency, reduced costs, risk mitigation, improved quality of care and quality of life, and increased transparency in the health system (Darkins et al. 2008[10]; Ossebaard et al. 2013[11]; Farahani et al. 2018[12]). Despite these advantages, the IoMT is not without challenges, not least structural and technical ones. For example, the pervasiveness and criticality of e-health technologies, the impact of adverse outcomes, and sensitivity of personal health information requires IoMT systems to have higher levels of reliability, safety, and security than typical systems (Gatouillat et al. 2018 [9]).

The availability of e-health systems is critical to ensure the sensing and integrity of vital information collected from the patient. According to (Yang 2014 [13]), “because resources, time, and money are always limited in real world applications, we have to find solutions to optimally use these valuable resources under various constraints.” This is particularly true in the context of an e-health monitoring system. Historically, one of the barriers to the widespread adoption of telemedicine was cost factors associated with heterogeneous devices and single point solutions (often for therapeutic application) (Gatouillat et al. 2018[9]). da Silva Lisboa et al. (2018[5]) propose an e-health system architecture based on sensors, fog, and cloud computing. Stochastics models were proposed to evaluate how failures of the infrastructure impact the availability of the e-health system. The authors evaluated four different scenarios with different configurations. The experiments showed that the e-health system availability increases from 99.7299% to 99.9709% when the application present in the fog and in the cloud are complementary and has redundancy. In addition, sensitivity analysis results shown that the fog and cloud applications are the components that have higher impact on the e-health system application.

Improving the availability of a system is not an easy task, especially if availability, including connectivity and coverage, are not considered in the conception phase. Some techniques, such as redundancy and geographic distribution, are commonly applied but at same time, from a management perspective, they bring many challenges.