Pseudomyxoma Peritonei (PMP) is a unique clinical condition characterized by massive intraperitoneal growth of mucinous ascites that may be accompanied by peritoneal implants of mucinous tumors.

PMP is characterized by intraperitoneal dissemination of mucinous tumors and accumulation throughout the abdominal cavity of mucinous ascites (Figure 1a) originally called “jelly belly”, when first described in 1884 by Werth [1]. In the majority of cases, PMP originates from an appendiceal mucinous neoplasm, but a similar clinical picture has been exceptionally described in some ovarian (mature cystic teratomas), colorectal, pancreatic, urachus and breast neoplasm [2]. In 2–5% of cases the origin remains unknown. In appendiceal tumors, the neoplastic proliferation of goblet cells leads to a constitutive production and accumulation of mucin in the lumen (appendiceal mucocele, Figure 1b), causing the rupture of the appendiceal wall and the spread of neoplastic cells into the peritoneal cavity.

Figure 1. (a) Intraoperative view of abdominal mucin accumulation in pseudomyxoma peritonei (PMP) and (b) appendiceal mucinous neoplasia with mucocele.

The exfoliated mucinous cells tend to be redistributed into the peritoneum according to abdominal fluid hydrodynamics, which is regulated by gravity and by the diaphragm and bowel movements [3][4]. Mucinous cells tend to implant at reabsorption sites of peritoneal fluids, the so-called lymphatic stomata. Therefore, these sites and the dependent recesses of the peritoneal cavity may be invaded by tumor implants and mucin. The progressive accumulation of mucinous ascites is favored by the absence of symptoms in the early phase of the disease. This condition invariably progresses and leads to abdominal distension and compression of visceral organs, causing the majority of symptoms, disability and complications in affected patients [5]. Moreover, progressive inflammation promotes fibrotic reaction of mesothelium, with the development of intestinal obstruction, which is often a fatal complication of untreated or recurrent PMP [6]. The main steps of PMP pathogenesis are summarized in Figure 2. 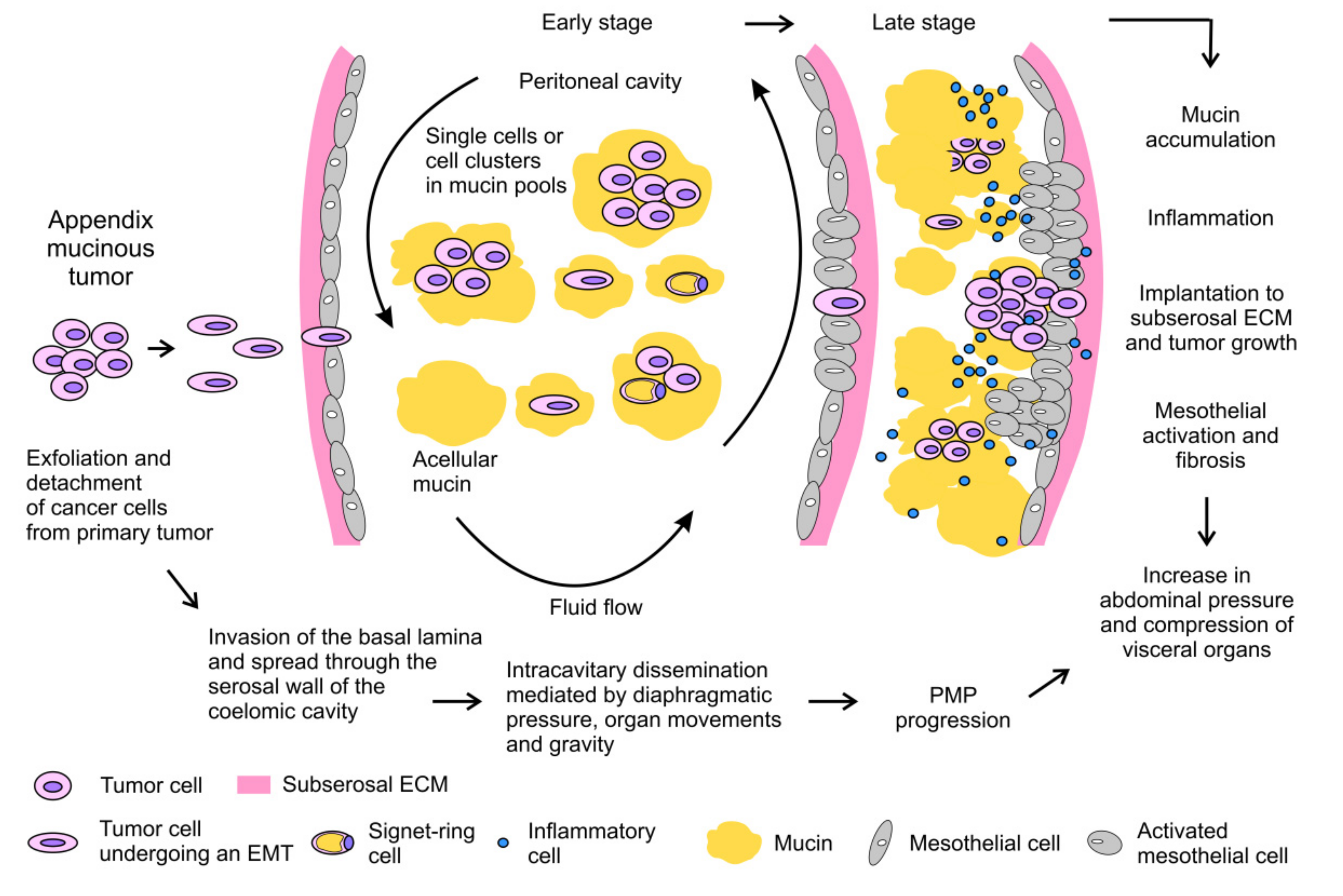 Figure 2. Transcoelomic spread of tumor cells, PMP development and progression. Tumor cells induced to undergo an epithelial–mesenchymal transition (EMT) detach from the primary tumor and invade the peritoneal cavity through the serosal wall. The malignant seeding of mucin-producing single cells and cell clusters into the abdominal cavity is regulated by peritoneal fluid dynamics. Ascitic fluid flow is influenced by the movements of the diaphragm and the abdominal muscles, the peristaltic movements of the intestinal tract and by gravity. The presence of signet-ring cells denotes an aggressive, high-grade PMP. Peritoneal implants are generated by the attachment of tumor cells mainly at sites of fluid reabsorption. The tumor cells invade the subserosal extracellular matrix (ECM) and proliferate. Tumor progression is accompanied by massive mucin accumulation, inflammation and fibrosis of the mesothelial lining.

PMP is considered a rare disease with an estimated incidence rate between 1 and 4 people per million per year [7][8]. The diagnosis is frequently made after the age of 40 with a 2–3 × higher incidence in women [7][9]. Clinical presentation is quite variable [10]. Most patients are diagnosed through a laparotomy/laparoscopy performed for suspected appendicitis or peritonitis or other surgical procedures. In women, PMP is frequently diagnosed following investigations of an ovarian mass or for infertility. However, a significant number of PMP remains frequently asymptomatic for a long time, becoming evident only after radiological examination performed for other causes. In advanced stage, clinical presentation includes increased abdominal girth or ascites. In patients with suspected PMP, laparoscopy is the most sensitive method for diagnosis and staging. Laparoscopy allows for direct visualization of tumor nodules and for large-size biopsy, as the large areas of acellular tissue leads to a high risk of inconclusive diagnosis following radiologically-guided biopsy [11]. Computed tomography scan is considered the gold standard for PMP diagnosis and staging [12]. T1–T2 weighted magnetic resonance imaging scans are more sensitive in distinguishing between mucin and cellular tissue, while positron emission tomography is in general of little value as mucinous implants have a very low metabolic activity due to the paucity of tumoral cells [13]. Carcinoembryonic antigen (CEA), carbohydrate antigen 19.9 and 125 (CA19.9 and CA125) have a relative role in the diagnostic framework, but are more relevant as prognostic markers and for detecting early recurrence [12][14].

Historically, debulking surgery has been the mainstay of PMP treatment and the only available therapy able to guarantee long-term tumor control [15][16]. In the early nineties, an innovative locoregional approach was proposed by Sugarbaker [17], based on a more aggressive CytoReductive Surgery (CRS), consisting of multiple peritonectomies and visceral resections, combined with Hyperthermic IntraPEritoneal Chemotherapy (HIPEC). CRS/HIPEC has been shown to significantly improve disease control and overall survival, and it should be considered the standard of care for the majority of PMP patients within centers with experience in peritoneal tumor treatment [18]. CRS/HIPEC achieves currently the best locoregional disease control, with a median overall survival and progression-free survival rate of 16.3 years and 8.2 years, respectively [18]. In patients with recurrent and/or unresectable disease, surgery remains the best therapeutic option to palliate obstructive symptoms such as abdominal discomfort and pain. More recently, an innovative locoregional approach has been developed, the pressurized intraperitoneal aerosol chemotherapy (PIPAC), which has been introduced as palliative treatment for patients with unresectable peritoneal metastases [19]. PIPAC is a minimally invasive surgical technique for intraperitoneal drug delivery able to treat peritoneal cancer nodules of different origin (gastric, colorectal and ovary). It was shown to increase drug penetration without altering the distribution pattern in a swine model [20]. A present, although unfrequently used in PMP, it represents a promising approach for disease control in cases not eligible for radical surgery.

Systemic chemotherapy should be considered when CRS/HIPEC is not indicated due to comorbidities or unresectable disease, or in the case of recurrent PMP, for which iterative CRS/HIPEC is ineffective. However, limited data are available on the role of chemotherapy in PMP patients, who are generally considered unresponsive to standard 5-fluoropyrimidine-based regimens [21]. Even if the response rate in these cases is expected to be no more than 20%, systemic chemotherapy is the only treatment available to realistically obtain disease control in patients who are not candidates for CRS/HIPEC. The frequent KRAS mutations in PMP predict that therapy with EGFR-targeted agents, as demonstrated in CRC, is likely to be ineffective [22]. Likewise, BRAF-targeted therapy seems unlikely to be effective, as BRAF is rarely mutated in PMP.

Although the recent introduction of immunotherapy has shown promising results in CRC patients [23], especially in patients with defective MisMatch Repair (dMMR), this treatment has not yet been tested in PMP patients for the rarity of this functional loss. An ongoing phase II study of nivolumab and ipilimumab is recruiting patients with metastatic mucinous colorectal and appendiceal tumors with proficient MMR (ClinicalTrials.gov Identifier: NCT03693846). The potential effect of innovative locoregional treatments, such as PIPAC, in eliciting an immune response by increasing the release of tumor-associated antigens is presently under active investigation.

In patients with extensive or recurrent disease, one strategic target for therapy is to promote breakdown of mucin to control symptoms and improve the quality of life in PMP patients. Among different mucolytic agents, bromelain and N-acetylcysteine have been tested with encouraging results. The activity of these two drugs was analyzed on mucinous ascites from PMP patients and on mucin-producing gastrointestinal cancer cell lines [24][25]. Their combination showed a synergistic effect in the mucolytic activity in a rat preclinical model intraperitoneally implanted with mucin. Moreover, they showed antiproliferative effects in a nude mouse model xenografted with mucin-producing cell lines [24][25]. These results were confirmed in a phase I trial in humans, where a significant mucolytic activity was detected after percutaneous injection, with a good radiological response on mucin accumulation and irrelevant toxicity [26]. A multicenter trial investigating the effectiveness of bromelain and N-acetylcysteine (BromAc) in patients with mucinous tumors including PMP, administered directly into the tumor or in the peritoneal cavity through a percutaneous drain, is presently ongoing (ClinicalTrials.gov Identifier: NCT03976973). Cysteamine, another mucolytic substance, was analyzed in combination with bromelain and showed promising results in an in vitro system simulating a peritoneal wash [27].

PMP is a rare condition with a unique clinical course and fatal prognosis in a significant percentage of patients. The tendency of this disorder to remain confined to the peritoneal cavity and the relative unresponsiveness to systemic and/or targeted therapies has led to the adoption of locoregional treatments such as CRS/HIPEC, which currently allows an optimal disease control and cure in the majority of affected patients. However, some patients are not eligible for surgery due to the presence of extensive or recurrent disease, and they experience a very poor quality of life. Therefore, a better understanding of the molecular basis of PMP progression is urgently needed to increase the chances of treatment and cure in these patients, to improve the results of the CRS/HIPEC in potentially curable patients, and to potentially expand treatment to a wider range.

Mucin heavily affects systemic drug activity and is a determining factor in PMP morbidity. Inhibition of mucin production, through modulation of epithelial-mesenchymal plasticity (EMP) or inhibition of the cAMP-PKA pathway, and the decrease of mucin hardness should be considered for two main reasons. First, the development of preoperative mucolytic protocols in patients selected for potentially curative CRS/HIPEC might make surgery easier and improve surgical outcome by reducing the risk of post-operative complications. Second, mucolytic treatment might also be used for the control of symptoms in patients with unresectable PMP.

A considerable body of evidence shows that EMP is implicated in PMP aggressiveness. Isolated PMP cells have been found to express a transitioning, more mesenchymal profile compared to that expressed by cell clusters, which are characterized by a more epithelial state. The detection of these isolated cells with a more mesenchymal hybrid state in mucin has been associated with a poorer prognosis. Furthermore, an EMT signature is significantly associated with a subgroup of low-grade PMP patients with a more aggressive clinical course. These data clearly highlight the high plasticity of PMP cells, and suggest that factors and expression profiles linked to EMP might have a valuable prognostic significance. In-depth analysis of the prognostic impact of EMP profiles in PMP might permit, in the next future, a better stratification of low-grade PMP patients, by possibly identifying subjects who could benefit in terms of survival from locoregional treatment. EMP is also linked to extraskeletal ossification, a rare pathological feature found in many cancers, including PMP, and very likely to the overexpression of mucins, although this last association has not been directly investigated yet. Dissecting the molecular networks of these interactions might allow for the identification of therapeutic strategies able to interfere not only with PMP aggressiveness, but also with mucin production.