MREs are generally fabricated from three thoroughly mixed primary components, including elastomeric material (matrix), magnetic filler particles, and additives [67]. The structure of MREs consists of micro- to nanosized filler magnetic particles, dispersed in a polymeric nonmagnetic matrix [68][69][70]. MREs have been fabricated from various types of matrix materials, such as natural rubber, polyurethane (PUR) rubber [71], silicone rubber (SR) [72], ethylene propylene diene rubber (EPDM) [73], and PDMS rubber [74]. Similarly, a variety of magnetic filler particles have been utilized in fabricating MREs, but bare iron particles (BIPs) [75] and carbonyl iron particles (CIPs) [76] are the most widely used magnetic filler particles. These particles are used in different shapes (sphere, flower, flake, and nugget) and sizes (5 to 100 μm). It has been reported that CIPs with an average diameter of 1–9 μm in the volume concentration from 25% to 30% offer ideal magnetic filler particle properties [31]. To further improve the properties of MREs, several additives, including plasticizers, silane coupling agents, and nanosized particles—such as carbon black, carbon nanotubes, graphite, and graphene—have also been incorporated [59][77]. Plasticizers improve elastomer mobility, matrix/filler affinity, and reduce the viscosity of matrix and storage modulus [78]. Silane coupling agents modify the surface properties of filler particles and improve their compatibility with the matrix [13]. Similarly, the addition of nanosized particles, particularly carbon black powder, increases the MR effects and tensile strength and decreases the damping ratio of MREs [24].

MREs are composed of three major constituents: an elastomeric matrix, magnetic reinforcing particles, and additives. A variety of elastomeric materials, including liquid silicone [73], room temperature vulcanized (RTV)-based SR [31][45], high temperature vulcanized (HTV)-based SR [86], EPDM rubber [24], PUR [12][70], PDMS rubber [77][79], propylene rubber [30], SR resin [87], natural rubber (NR) [82], and scrub tire rubber [33] have been used for the fabrication of MREs. Among all, SR is the most extensively used rubber due to its unique properties such as room temperature vulcanization, ease of handling and processing, a wide range of operating temperatures, excellent hardness, stiffness [31], nontoxicity, and aging resistance [34]. Various magnetic reinforcing particles, i.e., BIPs [79][88], CIPs [21][69][89], Penta CIPs [90], magnetite (Fe3O4) [33], titanium dioxide (TiO2) [61], and hard FeNdB [91] particles have been utilized for the fabrication of MREs. However, CIPs are the most commonly employed magnetic particles due to their high saturation magnetization and a wide range of particle size availability (1–200 μm) [91]. A fabricated MRE sample is illustrated in Figure 1, whereas various types of elastomeric matrices, magnetic filler particles, additives, and key parameters—used in the fabrication of isotropic MREs—are tabulated in Table 1. 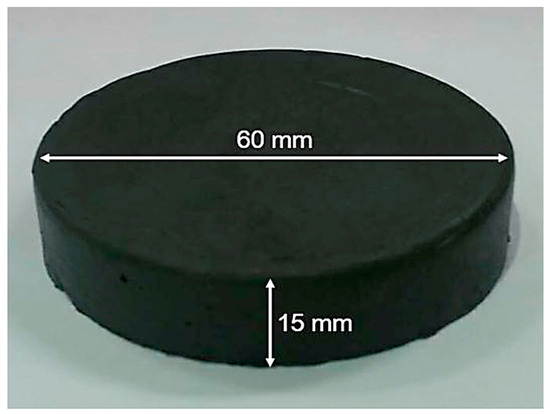 In the case of SR, the fabrication of isotropic MREs is quite easy and simple. The first step in SR-based MRE fabrication is the thorough mixing of liquid SR with suitable additives, such as catalyst [73], silicone oil (SO) [31], PDMS [45], graphene nanopowder [92], or 1,3-divinyl-1,1,3-tetramethyl disiloxane [22], and suitable magnetic filler particles for sufficient time to obtain a uniform dispersion of particles in the solution [45]. The magnetic filler particles are usually added in the volume fractions, ranging from 5–40 vol%, whereas additives are added as per the required properties. Afterwards, this blend is placed inside a vacuum chamber for sufficient time to remove the trapped air bubbles during mixing [73]. After proper degassing, the blend is poured into plastic or metal molds. Then, the molds are again placed in the vacuum chamber for sufficient time for further degassing. As mentioned earlier, SR has the property of room temperature vulcanization, therefore, the solution is cured (vulcanized) in the molds at room temperature [23] or slightly higher temperature (65 °C) [93] after sufficient time, ranging from 10–2880 min [35][45]. In the case of any other polymeric matrix, high-temperature vulcanization is carried out.

On the other hand, the PUR-based MREs are fabricated by mixing PUR rubber with additives (SO) and magnetic filler particles (CIPs) thoroughly at room temperature [12] or a slightly higher temperature (67 °C) [61]. This mixture is then poured into molds and cured at a specific temperature and pressure (20 KNm−2) to get a final product [12][61]. Similarly, NR-based MREs are fabricated by mixing NR with filler particles homogeneously by two-roll mill or any other means and pouring into molds. Curing of NR-based MREs is performed in an oven, maintained at 180 °C under specific pressure (200 bar) for a specific time (10 min) to get the final isotropic MRE [27]. Furthermore, the fabrication of isotropic MRE from scrap tire rubber involves the separation of rubber from metals and fabrics, shredding into powder of 60-mesh size, and analyzing its chemical composition (usually 7% acetone extract, 5.45 ash, 32.9% carbon black, 54.6% hydrocarbon rubber). The Fe3O4 (60-mesh size) or Penta CIPs (6 μm) particles in 10–40 wt% are usually used as magnetic filler particles and sulfur, zinc oxide, stearic acid, and latex solutions as additives. The fabrication process of MREs from scrap tire rubber is comprised of several stages, including mixing of 100 phr of crumb rubber with 2 phr of sulfur, 1.5 phr of stearic acid, and 5 phr of zinc oxide for 15–30 min; addition of 15% latex solution; and further mixing for 15 min. Finally, the mixture is poured into molds and placed in a high-pressure high-temperature (HPHT) sintering device [92]. Sintering of molds was performed by applying a pressure of 25 MPa, heating to a temperature of 200 °C at a heating rate of 10 °Cmin−1 within 17–20 min, and soaking at this temperature for 1 h. The hot molds are then cooled to room temperature. The volume fraction of produced MREs can be derived using Equation (1) [33].

Various characterization techniques—i.e., scanning electron microscopy (SEM), energy dispersive spectroscopy (EDS), X-ray photoelectron spectroscopy (XPS), Fourier transform infrared spectroscopy, and X-ray diffraction spectroscopy (XRD)—have been employed to explore the morphological properties of isotropic MREs. It has been reported that the morphology of SR- and CIP-based MREs comprises homogeneously distributed CIPs throughout the SR matrix [34]. The large size CIPs of 6.25-µm diameter exhibit fairly uniform distribution, whereas small diameter CIPs produce agglomerates in the matrix. In the case of small diameter CIPs, the distance between particles was observed to be smaller and filler–filler particle interactions was greater, resulting in agglomeration of particles [94]. The addition of 10 wt% silicone oil causes more homogeneous dispersion of CIPs in the SR matrix without any structuring or surface defect [29]. SEM images, a histogram of particle size, XRD, FTIR spectra of SR, and CIP-based MREs, having PDMS as an additive, are illustrated in Figure 4. It was found that the morphology of CIPs-free MRE validated the formation of nonporous composite elastomers due to vulcanization under vacuum conditions (Figure 4a). On the other hand, Figure 4b demonstrated the random distribution of CIPs in the SR matrix. Similarly, Figure 4c,d confirmed the random distribution of CIPs with 2.5-mm average particle diameter in the SR matrix in the range of 0.5–4 mm. Two broad peaks at 12° and 23° in the XRD spectra validated the presence of PDMS and amorphous nature of SR-based polymer composite, whereas intense peaks at 44.8°, 65°, and 82.3° confirmed the presence and crystalline nature of CIPs (Figure 4e). The FTIR spectra of this MRE confirmed the asymmetric stretching vibration motion of Si–O–Si bond by absorption band at 800 cm−1 and the bending motion of Si–OH group by a peak near to 875 cm−1 (Figure 4f). The stretching vibrations of Si–O, and Si(CH3)2 groups were also validated by peaks in the range of 1000−1100 cm−1. The additional absorption bands in the region of 1250 cm−1 and 2960 cm−1 presented the stretching vibration of Si(CH3)2 [23]. XPS spectra verified the results of FTIR spectroscopy, as illustrated in Figure 5.

Figure 5. (a) XPS spectra of MRE with 20 wt% CIPs, demonstrating carbon, oxygen, silicon, and tin elements in the selected area, presented in inset figure. (b) XPS maps and atomic percentages of elements for the selected area [23] (reprinted with permission from ElsevierTM).

It has also been reported that the CIPs of 4–5 μm diameter exhibit uniform distribution in EPDM- and CIP-based MRE, whereas CIPs of diameter 8−10 μm demonstrate aggregation of 2–3 particles. This aggregation begins with the addition of 10 phr of CIPs and 60 phr of carbon black in the EPDM. The MRE with 5 phr of CIPs demonstrated the fair distribution of single CIP within the EPDM matrix without aggregation. In two separate MREs, containing 30 phr of CIPs and 30 phr of BIPs of a diameter of 4–5 μm, a combination of single-particle distribution and aggregation of 2–3 particles was observed. But the MRE containing 30 phr of CIPs demonstrated a very homogeneous distribution compared to BIP-based MRE [24]. Cvek et al. [30] reported the uniform dispersion of CIPs in both virgin and reprocessed thermoplastic elastomer (TPE)-based matrix CIPs without agglomeration and air bubbles. On the other hand, the morphology of PUR-based MREs, containing pure CIPs and PANI-modified CIPs, have also been explored. Compared to pure CIP-based MREs, homogeneous and agglomerated free morphology was achieved in the PANI-modified CIP-based MREs. A particular self-assembled structure of modified CIPs and excellent compatibility between the CIPs and PUR was observed in the PANI-modified CIP-based MRE, attributed to the bridging of the CIPs/PUR covalent bonds [91].

Figure 20. Plots of total energy density vs. cycles under different concentrations of CIPs [35] (reprinted with permission from ElsevierTM).