Among acute coronary syndrome (ACS) patients, 15% have concomitant cancer, especially in the first 6 months after their diagnosis, as well as in advanced metastatic stages. Lung, gastric, and pancreatic cancers are the most frequent malignancies associated with ACS.

Cardiovascular disease and cancer are responsible for the majority of deaths among persons 65 years of age and older in the Western world [1]. Amidst acute coronary syndrome (ACS) patients, 15% have concomitant cancer at various stages [2]. ACS may occur before or after establishing the diagnosis of cancer, and occasionally the diagnosis is made during hospitalization for ACS. Sometimes double antiplatelet therapy reveals the presence of a lying tumor through unexpected bleeding, such as gastrointestinal bleeding.

The incidence of ACS in patients with newly diagnosed cancer increases in the first 6 months after their diagnosis and in more advanced stages: lung, gastric, or pancreatic cancer are the most recurrent malignancies associated with ACS [3].

It is extremely important to assess the cardiovascular risk in patients with ACS and concomitant cancer: classic risk factors such as hypertension, smoking, diabetes, and obesity are somehow potentiated by several prothrombotic elements secreted by the tumor itself or expressed on its surface. Moreover, chemotherapy and radiotherapy can also exert prothrombotic, vasospastic, and proinflammatory actions [4][5]. Regarding cancer therapy, a highly prothrombotic status has been observed in patients treated with cisplatin, 5-fluorouracil, gemcitabine, erythropoietin, and bevacizumab [2].

Current guidelines for conservative and invasive treatment of ACS cannot be easily applied to all cancer patients. Indeed, prospective studies assessing the efficacy and safety of ACS treatment usually have excluded cases with active cancer. Furthermore, the management of ACS in patients with cancer is quite challenging, this is because it should be effective yet also safe. Thrombocytopenia, coagulopathy, and anemia are often present in these patients, and the probability of cancer recurrence may require interruption of double antiplatelet therapy (DAPT) in case of biopsies, surgery, or re-initiation of cancer therapy [6].

5-Fluorouracil (5-FU) and its oral pro-drug Capecitabine are associated with angina and ACS: 5-FU is related with endothelial damage and alteration in molecular signaling that controls smooth muscle cell tone, inducing abnormal vasoreactivity [7].

Cisplatin may induce acute coronary thrombosis, determinated by endothelial damage, thromboxane production, and platelet activation and aggregation as the main mechanism [8]. In combination with cisplatin, vinblastine can induce endothelial apoptosis, while bleomicin can worsen endothelial dysfunction, increasing vasotoxic properties of these drugs [9].

Cyclophosphamide may induce Prinzmetal’s angina or hemorrhagic peri-myocarditis [10], while Paclitaxel and Docetaxel are associated with vasospasm, ACS, and cardiac rhythm disturbance such as bradycardia [11].

Vascular endothelial grow factor (VEGF) signaling pathway inhibitors may cause endothelial dysfunction, vascular remodeling, inflammation, and platelet activation, responsible for increased risk of cardiovascular events [12]., Treatment with Sinutinib is related with a reduction in coronary flow reserve and abnormal vasofunctional balance, associated with microvascular impairment and rarefication of microvascular pericytes and capillaries [13]. Sorafenib has been also associated with coronary vasospasm and progression of coronary artery disease (CAD) [14]. An increased bleeding risk has been observed in patients treated with VEGF inhibitors.

Progression of atherosclerosis and ischemic events may be observed during treatment with Nilotinib and Polatenib, two tyrosine kinases inhibitors [15].

Finally, radiation therapy may be related with coronary and peripheral artery disease [20]. Ionizing radiations affect noncancerous cells, and endothelial cells are the most vulnerable: within a short period after radiation exposure, cholesterol plaques and thrombosis can form, and fibrosis may involve all three layers of the vessel wall [21], see Table 1 and Figure 1.

The clinical presentation of ACS in cancer patients may be different from that of noncancer patients. Dyspnea is one of the most incessant symptoms (44%), followed by chest pain (30%) and hypotension (23%) [22]. Additionally, in a significant percentage of cases, ACS may begin in the form of silent ischemia, probably as a consequence of the altered perception of angina due to the neurotoxicity of some chemotherapies. Ambiguous abnormalities on electrocardiograms and increased cardiac troponin levels do not necessarily indicate ACS [2].

Antiplatelet therapy represents a big challenge in cancer patients with ACS. These cases have a high risk of stent thrombosis and bleeding complications, which are often worsened by the presence of thrombocytopenia.

One of the most complex management strategies is the treatment of the patients with cancer, atrial fibrillation, and ACS.

Cancer is present in about 2.5% of patients with nonvalvular atrial fibrillation (NVAF), and this arrhythmia is associated with a poor prognosis and in-hospital mortality. Moreover, cancer and its treatments contribute to an increased prevalence of NVAF: anticancer treatment and cancer-associated factors, such as inflammation and dehydration, augment the risk of thromboembolic complications [24].

Furthermore, in addition to the type of anticancer therapy, it is essential to pay attention to the tumor site. As previously described, the use of edoxaban and rivaroxaban is associated with an increased risk of gastrointestinal bleeding [26].

Patients with cancer who are already on an oral anticoagulant, vitamin-K antagonist (VKA), or DOACs for NVAF and who develop ACS should receive low-molecular-weight heparin (LMWH) for the first six weeks. This should be followed by, if the bleeding risk (HASBLED score <3) is low, VKA or DOAC; if the risk of bleeding is high (HASBLED score ≥3) or the prognosis is poor, it is advisable to continue with LMWH, while monitoring the blood count and renal function [27]. The anticoagulant therapy needs to be associated with the antiplatelet therapy, preferably with ASA and Clopidogrel. According to recent NSTEMI ESC Guidelines [22], after considering the ischemic and bleeding risk, the triple therapy should be maintained for 1 week to 1 month depending on the patient risk profile. After that, one of the two antiplatelet drugs is suspended (preferably ASA); from the sixth/twelfth month it is possible to continue only with anticoagulant therapy [22][25][26]. During triple therapy in cancer patients, VKA should be titrated to obtain international normalized ratio (INR) of less than 2.5 or DOAC at reduced doses [28], see Figure 1. 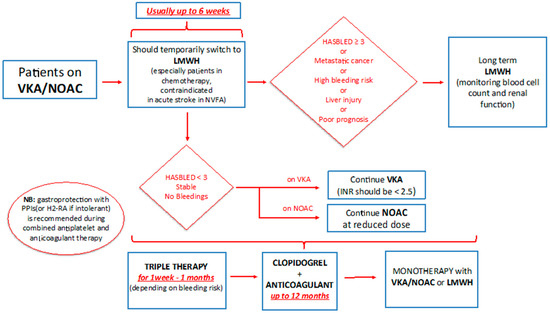