The growth arrest and DNA damage-inducible 45 alpha (GADD45A) gene encodes a 165 aa protein localized in the nucleus, whose level is highest in the G1 phase of the cell cycle, with a substantial reduction in S. The involvement of GADD45A in the cell cycle regulation and interaction with other proteins underline its function in the cellular DNA damage response and maintaining genomic stability, which, in turn, determines its high potential in cancer transformation. The protective role of GADD45A in DNA damage-induced tumorigenesis is the main biological function of this protein, but exact mechanism of it is not known. Emerging evidence suggests that GADD45A may be important in breast cancer and several molecular pathways were reported to underline this importance, including Ras, mitogen-activated protein kinase 8 (MAPK8), JNK (c-Jun N-terminal kinase) and p38. GADD45A may play a tumor-suppressor role by induction of senescence and apoptosis in cancer cells. However, it was also shown that GADD45A may promote tumorigenesis via the GSK3 β (glycogen synthase kinase 3 beta)/β-catenin signaling. Therefore, GADD45A may function as either a tumor promotor or suppressor, depending on the kind of oncogenic stress, and these two functions are mediated by different signaling pathways.

The growth arrest and DNA damage-inducible 45 alpha (GADD45A) gene plays a role in the regulation of the cellular reaction to stress as its transcript levels increase in response to stressful growth arrest conditions and DNA-damaging agents. The protein encoded by this gene responds to environmental stresses by mediating activation of the p38/JNK (c-Jun N-terminal kinase) pathway via the MTK1 (methylthioribose kinase 1)/MEKK4 (MEK kinase 4) kinase. Alternatively spliced transcript variants encoding distinct isoforms have been found for this gene [[1]].

The GADD45A gene codes for a 165 aa protein, the GADD45A protein, localized in the nucleus and ubiquitous in normal tissues. The level of GADD45A is related to the cell cycle and is highest in the G1 phase, with a substantial reduction in S [[2][3]]. It is degraded in the proteasome on ubiquitination and the activation of PKCdelta (protein kinase delta) may result in GADD55A deubiquitination, protecting it from degradation [[4]].

2. GADD45A and Its Role in Breast Cancer

GADD45A plays several important functions in the cell, including cell growth suppression; mediating cell cycle arrest at G2/M; apoptosis induction; and interaction with p53, CDK1 (cyclin dependent kinase 1, Cdc2), and cyclin B1 (Figure 1, reviewed in [[5]]). These functions underline an important role of GADD45A in maintaining genomic stability, DNA damage response (DDR), and cancer transformation. In fact, the protective role of GADD45A in DNA damage-induced tumorigenesis is a main biological function of this protein that has been demonstrated so far [[6][7][8]]. However, molecular pathways underlying this protective role of GADD45A in cancer are not completely known. 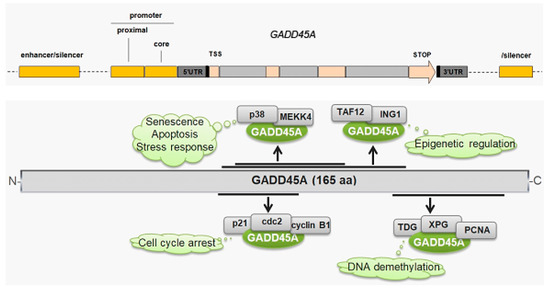 The important role of GADD45A in cancer transformation was also confirmed in breast cancer. A higher expression of GADD45A was observed in breast cancer samples compared with adjacent non-cancerous tissues [[9]]. Tront et al. observed that the loss of GADD45A accelerated mammary tumor formation driven by Ras activation in mice and that these tumors showed an increasing growth rate and were characterized by a more aggressive phenotype [[10]]. Moreover, they observed a decrease of apoptosis that was associated with the activation of mitogen-activated protein kinase 8 (MAPK8), as well as a decrease in Ras-induced senescence that was correlated with a decreased activation of p38. These authors presented the tumor-suppressive role of GADD45 in Ras-driven breast carcinogenesis through the induction of stress-sensitive JNK and p38 kinases. However, in their next work, Tront et al. showed that GADD45A promoted Myc-driven breast carcinogenesis by a negative regulation of MMP10 via GSK3 β/β-catenin signaling that resulted in enhanced tumor vascularization and growth [[11]]. These two works suggest that GADD45A may function as either a tumor promotor or suppressor, depending on the kind of oncogenic stress, and these two functions are mediated by different signaling pathways. Some associations between variability of the GADD45A gene and the occurrence of breast cancer with no BRCA1/2 mutation (sporadic and familial) were found in a large cohort study performed in a Chinese population [[12]]. Similar results were also obtained in nearly 100 French Canadian families without BRCA1/2 mutations [[13]].