Wine sensory experience includes flavor, aroma, color, and  even acoustic traits, which impact consumer acceptance. The quality of the wine can be negatively impacted by the presence of off-flavors and aromas. Flavor profiles of wines are the result of a vast number of variations in vineyard and winery production, including grape selection, winemaker’s knowledge and technique, and tools used to produce wines with a specific flavor. One of the most important “tools” for modulating flavor in wines is the choice of the yeasts. During alcoholic fermentation, the wine yeasts extract and metabolize compounds from the grape must by modifying grape-derived molecules, producing flavor-active compounds.

Yeast and bacteria are vital to the development of wine flavor. Many biosynthetic pathways, in wine yeast and malolactic bacteria, are responsible for the formation of wine aroma and flavor. However, we cannot discard the other factors that can also influence the wine chemical composition, such as viticultural practices, grape-must composition, pH, fermentation temperature, and technological aspects associated with the vinification process [1]. So, depending on their origin, wine aroma and flavor compounds can be named varietal aromas (originating from the grapes), fermentative aromas (originating during alcoholic and malolactic fermentations), and aging aromas (developed during the reductive or oxidative wine-aging that depends on storage conditions) [2].

A group of aroma compounds has been directly linked to specific varietal flavors and aromas in wines [5,6]. Most of these compounds are present at low concentrations in both grapes and fermented wine. These aroma compounds are found in grapes in the form of non-odorant precursors that, due to the metabolic activity of Saccharomyces and non-Saccharomyces yeast during fermentation, are transformed to aromas and flavor that are of great relevance in the sensory perception of wines [6] (Table 1).

During alcoholic fermentation, some yeast, mainly non-Saccharomyces yeasts, can release β-glucosidases that hydrolyze the glycosidic bonds of the odorless non-volatile glycoside linked forms of monoterpenes (geraniol, linalool, nerol, among others), releasing the odor compounds to the wine [15]. Volatile thiols that give Sauvignon blanc wines their characteristic aroma (bell pepper, black currant, grapefruit, and citrus peel) are not present in grape juice but occur in grape must as odorless, non-volatile, cysteine-bound conjugates. During fermentation, the wine yeasts are responsible for the cleaving of the thiol from the precursor [16].

Higher alcohols are derived from amino acid catabolism via a pathway that was first described by Ehrlich [18] and later revised by Neubauer and Fromherz in 1911 [19]. Amino acids that are assimilated by the Ehrlich pathway (valine, leucine, isoleucine, methionine, and phenylalanine), present in grape must are metabolized by yeasts, sequentially, throughout the fermentation. Figure 1 shows the metabolism of phenylalanine with the production of 2-phenylethanol and, after oxidation of phenylacetaldehyde, the formation of phenylacetate. Both compounds possess a pleasant rose-like aroma/flavor. 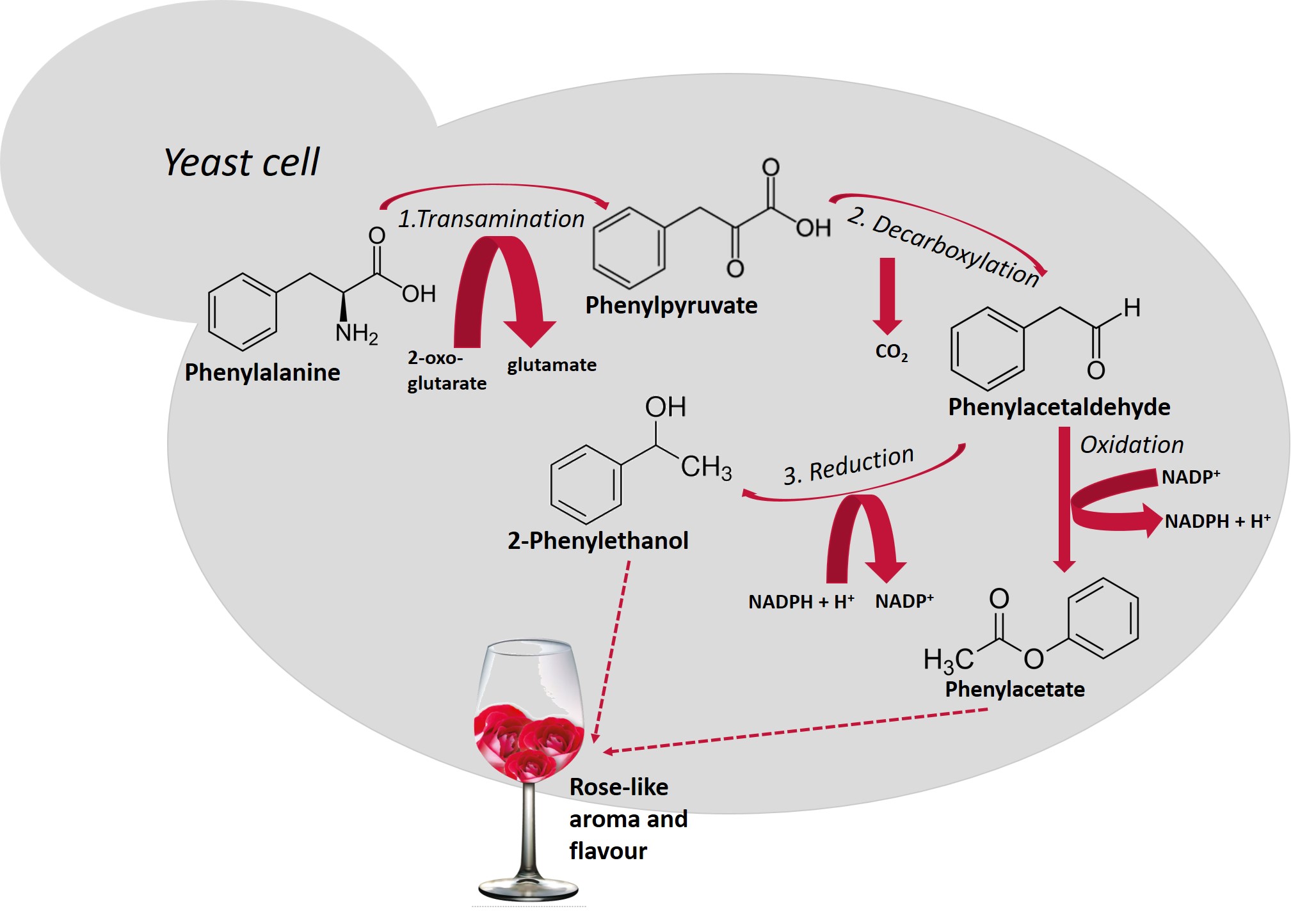 Figure 1. Schematic representation of the Ehrlich pathway for the catabolism of the aromatic amino acid, phenylalanine leading to the formation of 2-phenylethanol [20]. This biosynthetic pathway consists of three steps (reactions 1, 2 and 3): first, amino acids are deaminated to the corresponding α-ketoacids, in reactions catalyzed by transaminases. In a second step, α-ketoacids are decarboxylated and converted to their corresponding aldehydes (five decarboxylases are involved in this process), in a third step, alcohol dehydrogenases (Adh1p to Adh6p and Sfa1p) catalyze the reduction of aldehydes to their corresponding higher alcohols [21].

Studies have shown that profiles and concentrations of higher alcohols produced vary by yeast species, even when the fermentation conditions are similar, which indicates that the mechanisms that regulate the Ehrlich pathway are diverse in non-Saccharomyces yeasts compared to Saccharomyces [2,22]. So, Ehrlich pathway mechanisms should be explored in detail in non-Saccharomyces yeasts as it contributes to the formation of important and flavorful wine aromas [22].

The most important esters are synthetized by yeasts during alcoholic fermentation as a detoxification mechanism since they are less toxic than their correspondent alcohol or acidic precursors. Moreover, their synthesis serves as a mechanism for the regeneration of free CoA from its conjugates [2,23].

Esters (Figure 2) that contribute to wine aroma, derived from fermentation, belong to two categories: the acetate esters of higher alcohols and the ethyl esters of medium-chain fatty acids (MCFA). Acetate esters are formed inside the yeast cell, and in S. cerevisiae the reaction is metabolized by two alcohol acetyltransferases, AATase I and AATase II (encoded by genes ATF1 and ATF2 [21,24]). Eat1p is responsible for the production of acetate and propanoate esters [25,26]. Most medium-chain fatty acid ethyl ester biosynthesis during fermentation is catalyzed by two enzymes, Eht1p and Eeb1p [24,27]. 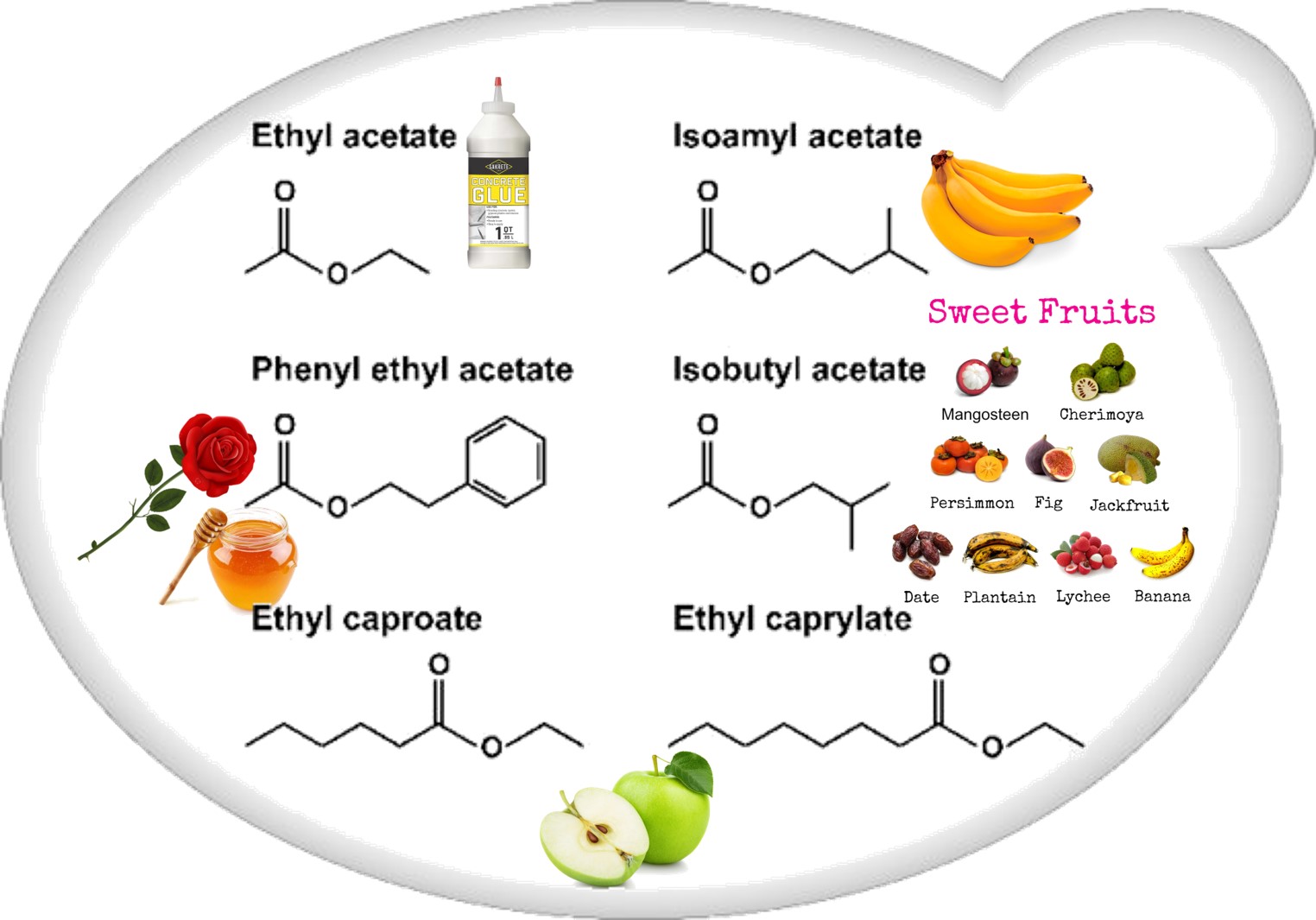 Volatile fatty acids also contribute to the flavor and aroma of the wine. During yeast fermentation, long-chain fatty acids (LCFAs) are also formed via the fatty-acid synthesis pathway from acetyl-CoA in concentrations varying from ng/L to g/L [28]. Medium-chain fatty acids (MCFAs (C6 to C12)) are produced primarily by yeasts as intermediates in the biosynthesis of LCFAs that are prematurely released from the fatty acid synthase complex. These acids (Table 2) directly contribute to the flavor of wine or serve as substrates that participate in the formation of ethyl acetates [29]. As most have unpleasant aromas (see Table 2), their formation should be minimized.

Sulfur-containing compounds can also be formed by yeasts during alcoholic fermentation. They are usually perceived as off-flavors. The sulfur-containing compounds can be derived from the grape and the metabolic activities of yeast and bacteria. They can also occur due to the chemical reactions during the wine aging and storage and also due to environmental contamination [31]. They can be formed by enzymatic mechanism as the products of metabolic and fermentative pathways whose substrates are both amino acids and some sulfur-containing pesticides. When wine microorganisms metabolize these thiols, the sulfur compounds formed are considered off-flavors [32] which convey negative notes such as cabbage, garlic, onion, rotten eggs, rubber, and sulfur to wines [33]. However, there are some volatile thiols that may confer enjoyable aromatic notes at trace levels, such as 4-mercapto-4-methylpentan-2-one (4MMP), 3-mercaptohexan-1-ol (3MH), already mentioned in Table 1, and 3-mercaptohexyl acetate (3MHA), important for the characterization of the typical Sauvignon Blanc wine aroma [10,11,34].

Finally, another important family of aromatic compounds present in wines are the carbonyl compounds. In this group we may include acetaldehyde, acrolein, ethyl carbamate, formaldehyde, and furfural [35]. Several factors may contribute to the presence of carbonyl compounds in wines, including the fermentation of over-ripe grapes and increasing the maceration time, probably due to increased concentration of the precursors like amino acids and glucose in the must [36]. Due to their carbonyl group, carbonyl compounds present a high reactivity with the nucleophile’s cellular constituents [37] and may cause cell damage. So, these compounds are toxic, and their formation should be avoided.