Subjects: Others
View times: 462
Submitted by:

Depression is a common and severe neuropsychiatric disorder that is one of the leading causes of global disease burden. Although various anti-depressants are currently available, their efficacies are barely adequate and many have side effects. Hericium erinaceus, also known as Lion’s mane mushroom, has been shown to have various health benefits, including antioxidative, antidiabetic, anticancer, anti-inflammatory, antimicrobial, antihyperglycemic, and hypolipidemic effects. It has been used to treat cognitive impairment, Parkinson’s disease, and Alzheimer’s disease. Bioactive compounds extracted from the mycelia and fruiting bodies of H. erinaceus have been found to promote the expression of neurotrophic factors that are associated with cell proliferation such as nerve growth factors. Although antidepressant effects of H. erinaceus have not been validated and compared to the conventional antidepressants, based on the neurotrophic and neurogenic pathophysiology of depression, H. erinaceus may be a potential alternative medicine for the treatment of depression.

Major depressive disorder, also known as depression, is a common neuropsychiatric disorder that affects more than 300 million people of all ages [[1]] and is one of the leading causes of global disease burden [[2]]. The common signs and symptoms of depression include loss of interest in daily activities, difficulty concentrating and making decisions, fatigue, sleep problems, overeating or appetite loss, pessimism, hopelessness, persistent sadness, and restlessness [[3][4]]. Untreated depression could lead to suicidal thoughts or suicide attempts [[3],[5]]. Suicide is the second leading cause of death in young adults worldwide [[1]], and approximately 800,000 cases of suicide are reported annually [[1]]. Although many types of antidepressant drugs are available, their overall efficacy is still barely satisfactory [[6][7]]. Studies of antidepressants in adults with moderate or severe depressive disorder revealed that currently available antidepressants could only relieve symptoms of depression in about 20% of patients [[7]]. Furthermore, antidepressant medication often needs to be administered continuously for years to prevent relapse [[8]]. Besides, more than 50% of antidepressant users reported that they experienced side effects, including headaches, dry mouth, anxiety, dizziness, weight gain, decreased interest in sex, as well as a loss of ability to have an orgasm or an erection [[9][10]]. The side effects can often lead to failure in the administration of antidepressants in depressive patients [[11][12]].

Herbal medicine can be a cost-effective complementary and alternative medicine for the treatment of depressive disorders, generally with fewer side effects and limited comparative efficacy to conventional antidepressants, as well as it is well-tolerated by depressive patients [[13][14]]. Mushrooms are functional foods with high nutritional values and are great sources for novel therapeutic compounds [[12],[15]]. Hericium erinaceus is a medicinal-culinary mushroom widely found in East Asian countries and is commonly known as lion’s mane mushroom, Yamabushitake, or monkey’s head mushroom [[16]]. Hericium erinaceus has a long history as a medicine [[16]] and has been found to promote positive nerve and brain health. It has great potential in treating neurological disorders as it contains neurotrophic compounds that can pass through the blood–brain barrier [[17][18]]. Bioactive compounds extracted from its fruiting body or mycelium (Figure 1) have been demonstrated to possess antioxidative [[19]], antidiabetic [[20]], anticancer [[21][22]], anti-inflammatory [[23]], antimicrobial [[22]], antihyperglycemic [[24]], and hypolipidemic properties [[25]]. Moreover, H. erinaceus has been used to treat cognitive impairments [[26]], Alzheimer’s disease [[27]], Parkinson’s disease [[28]], ischemic stroke [[29]], and presbycusis [[13]]. Recently, the present research on H. erinaceus has been focused on its antidepressant-like effects for the treatment of depressive disorder [[30][31][32]]. Up to date, no review concerning the antidepressant effects of H. erinaceus is available. The aim of this review is to critically review the current literature on the potential antidepressant effects of H. erinaceus as a treatment for depressive disorder as well as its possible mechanisms underlying the antidepressant-like responses. 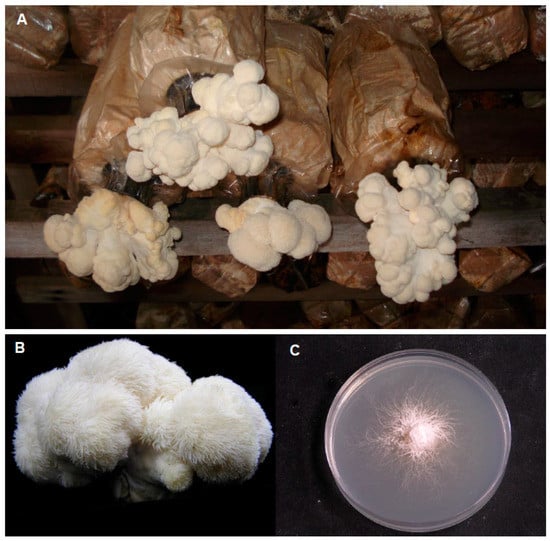 Figure 1. Fruiting bodies cultivated at the tropical climate in Malaysia (A, B) and mycelia (C) of Hericium erinaceus grown on potato dextrose agar.

Data gathered in the review show that there is scientific evidence supporting the antidepressant-like effects of H. erinaceus. Hericium erinaceus crude extract contains various hericenones, erinacines, and possibly other bioactive compounds that are still being discovered. Overall, the potent NGF-enhancing activities of H. erinacines are possibly mediated through the synergistic effects of several compounds in the crude extract. These compounds can greatly enhance adult hippocampal neurogenesis and contribute to the antidepressant-like effects. Chronic stress is known to induce an anhedonia effect that is highly associated with depression [[33][34]]. However, the anti-anhedonia activity of H. erinaceus has not been reported yet and needs to be investigated in future studies. Furthermore, it would be interesting to examine if hericenones, erinacines, or/and other compounds of H. erinaceus can be absorbed in the blood and pass through the blood–brain barrier. The variety of bioactive compounds with potent NGF-inducing activity also supports the use of crude extract rather than pure extracts. The majority of studies on H. erinaceus bioactive compounds have focused on their NGF activities. Future studies on the antidepressant activity of these bioactive compounds need to examine their effects on the expression of BDNF. Although BDNF was found to be restored in the hippocampus after chronic administration of H. erinaceus, it is still unclear whether the increase is also reflected in peripheral BDNF expressions [[35]]. The investigation of the effects on peripheral BDNF expression may provide important information for future clinical studies of depression. Moreover, as chronic administration of H. erinaceus was found to increase peripheral pro-BDNF but not BDNF [80], it would be interesting to examine the association of neurotrophic isoforms with depressive-like behaviors and whether H. erinaceus also affects their expression. In addition, as H. erinaceus was shown to stimulate monoaminergic modulation, it would be interesting to examine if the bioactive compounds of H. erinaceus act as agonists or inhibitors of monoamine neurotransmitter receptors. Although treatment with H. erinaceus was found to elicit an anti-inflammatory response, the detailed molecular mechanism is still unknown. These studies provide evidence that H. erinaceus possesses potential in alleviating depression, but the precise underlying mechanisms remain to be investigated. However, there is still a lack of strong and convincing evidence that H. erinaceus can effectively reduce anxiety and depression in vivo, which requires further investigation. Moreover, compounds in the extracts from the mycelium and fruiting body, as well as the method of extraction, requires further investigation to optimize the efficacy of H. erinaceus as a treatment for depressive disorders. In present investigation, majority of the studies does not include placebo or positive controls; and therefore, conventional antidepressants should be included as a positive control in future placebo-controlled research to compare their efficacy and eliminate potential placebo or non-specific effect. Furthermore, there is no concrete evidence of bioactive compounds unique to H. erinaceus that are responsible for its therapeutic effects, therefore future investigations involving selected medicinal-culinary mushrooms are highly warranted to rule out placebo and/or general effects.