Mucopolysaccharidosis-plus syndrome (MPSPS) is a novel disease of impaired glycosaminoglycans (GAGs) metabolism without deficiency of known lysosomal enzymes. MPSPS, whose pathophysiology is not elucidated, is an autosomal recessive multisystem disorder caused by a specific mutation p.R498W in the VPS33A gene. Clinical features of MPSPS patients are similar to conventional mucopolysaccharidoses (MPS). In addition to typical symptoms for conventional MPS, MPSPS patients developed other features such as congenital heart defects, renal and hematopoietic disorders. Diagnosis generally requires evidence of clinical picture similar to MPS and molecular genetic testing. Disease is very severe, prognosis is unfavorable and most of patients died at age of 10–20 months. Currently there is no specific therapy for this disease and clinical management is limited to supportive and symptomatic treatment.

Mucopolysaccharidosis-plus syndrome (MPSPS) is a novel disease of impaired glycosaminoglycans (GAGs) metabolism without deficiency of known lysosomal enzymes. MPSPS, whose pathophysiology is not elucidated, is an autosomal recessive multisystem disorder caused by a specific mutation p.R498W in the VPS33A gene.

Diagnosis generally requires evidence of clinical picture and molecular genetic testing. The finding of elevated urinary GAGs is supportive. Diagnosis is based upon on identification of detailed patient and family history. Prenatal diagnosis can verify if a fetus is affected with MPSPS.

Figure 1. Radiographic findings of a MPSPS patient at age of one-year and nine-month. Characteristics of dysostosis multiplex: (A) bullet-shaped phalanges (white arrow) and the metacarpal pointing (black arrow); (B) widening of anterior ribs (oar-shaped ribs) (arrowhead) and (C) vertebral dysplasia with round- and hooked-shape vertebral bodies (open arrow).

Examination of urine can reveal elevated levels of GAGs, specifically heparan and dermatan sulfate[1][2][3]. Accumulation of heparan sulfate was also detected in patient’s plasma and skin fibroblasts. Moreover, the heparan sulfate level in plasma was significantly exceeded in comparison with conventional MPS[2]. Activities of lysosomal glycosidases involved in the degradation of GAGs are not decreased in plasma, lymphocytes and patient-derived fibroblasts[2][3]. Finding of MPS-like phenotype and excess secretion of urinary GAGs without deficiency in the activity of lysosomal enzymes is the basis for suspicion of MPSPS. However, these tests cannot be used to provide definitive diagnosis of MPSPS. Diagnosis should be confirmed by molecular DNA analysis.

MPSPS is caused by missense mutation p.R498W in the VPS33A gene and is inherited in an autosomal recessive pattern. This mutation is specific, and no other disease-causative mutation has been reported in the VPS33A gene. Parents of MPSPS patients are heterozygous carriers of p.R498W mutation. Heterozygous carriers for MPSPS mutation are generally disease free and do not develop symptoms of disease. MPSPS affects males and females in equal numbers. The frequency of the pathogenic allele was very low in diverse populations from different databases (Table 1). But among Yakut population we observed extremely high allele frequency.

Clinical features of MPSPS patients are similar to conventional MPS. In addition to other forms of MPS, the differential diagnosis should also include LSD, such as mucolipidosis types II and III, Niemann-Pick disease, Gaucher's disease, fucosidosis, mannosidosis, sialidosis and multiple sulfatase deficiency. Clinical and biochemical studies distinguish these conditions. Disease is very severe, prognosis is unfavorable. Most of patients died of cardiorespiratory failure at the age of 10–20 months (Figure 2). 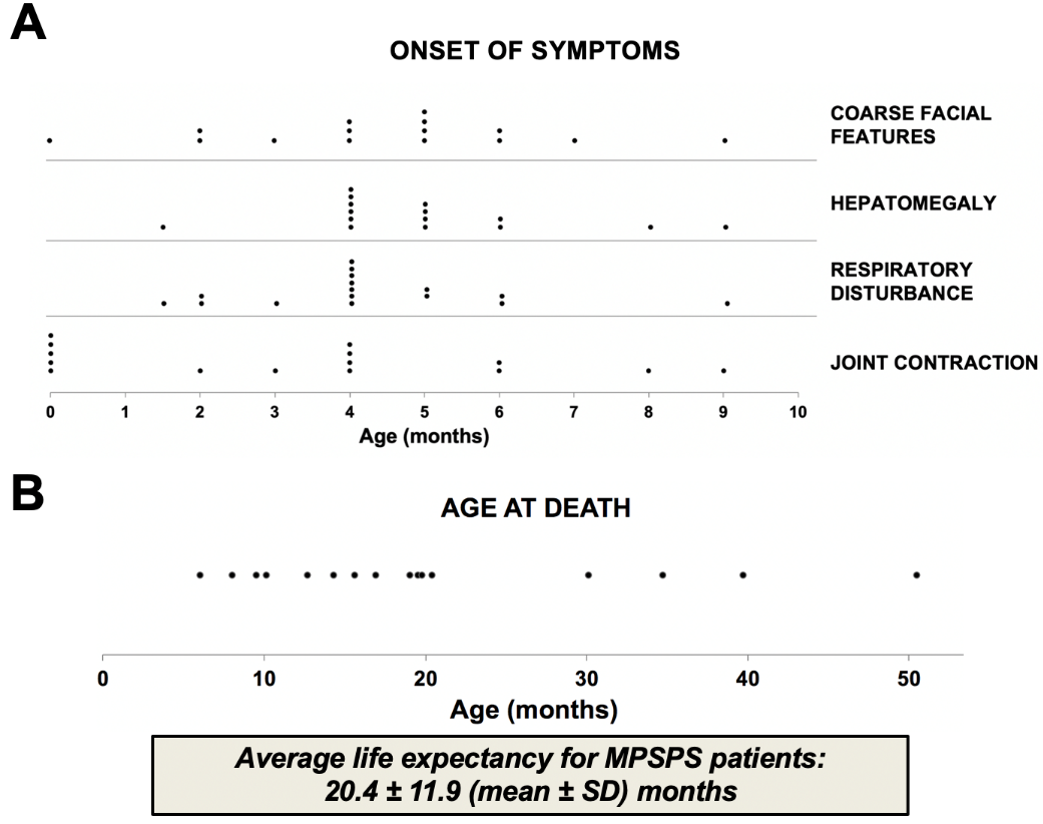 Figure 2. Onset of clinical features and life expectancy of MPSPS patients. Data from sixteen MPSPS patients from Yakutia (Russia). (A) Symptoms of disease usually occur between the ages of 2–6 months. (B) Most of patients died of cardiorespiratory failure at age of 10–20 months. Each dot indicates one MPSPS patient.