The term erosion is originally derived from the Latin word “rodere”, which means “to gnaw”, and used to indicate a form of materials wear (i.e. loss of material) that is caused by the impact of solid or liquid particles with sufficiently high speed. Liquid erosion can be divided into two types; cavitation erosion and liquid impingement erosion (LIE). The term Water droplet erosion (WDE) is commonly used to indicate liquid impingement erosion (LIE), where a progressive material loss is caused by the repetitive impact of high speed water droplets. WDE constitutes a major concern in many industries including aerospace and aviation, power generation industries particularly in gas turbines and steam turbines, nuclear power plants, and wind energy. Hence, WDE has become an important topic of research.

Water droplet erosion (WDE) is a form of materials wear that is caused by the impact of water droplets with sufficiently high speed. The problem was traditionally known also as liquid impingement erosion (LIE).

Discrete water droplets are emphasized to distinguish the WDE phenomenon from liquid jet erosion and cavitation. The range of impact pressures caused by discrete water droplet impact is considerably higher than the stagnation pressure caused by liquid jet. WDE is distinguished from cavitation erosion in the sense that WDE is usually encountered with gaseous or vaporous phase containing discrete liquid droplets, whereas cavitation erosion is observed when a continuous liquid phase carries within it discrete gaseous bubbles or cavities [1].

WDE of solid surfaces has long been a concern for most of high-speed moving components in environments containing water droplets. Blades of several types of machinery are particularly prone to experiencing WDE damage. The problem was first recognized in steam turbine blades in the early 1920s [2]. WDE damage is observed on the blades of the low pressure (LP) cycle. This is because steam turbine designers usually aim to maximize the length of the turbine blade at the low-pressure cycle in order to improve the output energy and overall efficiency of the turbine. The increase in the blade length increases the tip speed of the blade to as high as 900 m/s. Such high speed, in the wet steam medium, causes erosion of the blade [3]. Figure 1(a) illustrates the sequence of the erosion process experienced in a steam turbine blade. WDE is also seen in compressor blades of gas turbines, where the inlet air is cooled (fog cooling) to maximize air density and intake air mass. This will, in turn, increase the power output of the turbine, and therefore, improve the efficiency of the unit [4]. Although this method was proven to be effective, droplets are observed to cause severe damage to the leading edge of the compressor blades, as illustrated in Figure 1(b). This damage causes vibrations, which in turn increases the loss in the efficiency and results in serious fatigue damages [5]. More recently, aero-engine fan blades [6] and compressor of turbocharges in automobiles [7] have begun to encounter WDE damage as well.

WDE due to natural rain (known as rain erosion) is also a serious concern for aerospace and wind industry. For example, erosion caused by raindrop impact of the aircraft surfaces has been a major issue in aviation [8]. severe erosion damages are often observed in components made of brittle materials such as glass or thermosetting plastic domes and fibre-reinforced plastic radomes. Erosion damage appears in the form of pitting of airfoils, paint stripping, and/or failure of rivets. Figure 1(c) shows a schematic of damage intensity distribution across the body of a commercial aeroplane [8]. Rain erosion is seen also in helicopters, where leading edges of rotor blades are observed to experience significant erosion even at subsonic speeds [9].

In wind energy industry, rain erosion is known to affect the life and performance of the wind turbine blades [10]. Erosion damage is observed in different location in the wind turbine blade, but it is particularly significant along the leading edge of the blade. Hence, the term leading edge erosion (LEE) is often used to refer to erosion of wind turbine blades. Figure 1(d) shows a real life example of leading edge erosion. The high surface roughness and deep pits caused by LEE result in a substantial increase in drag force coupled with a decrease in lift [11]. This can result in a remarkable reduction in the aerodynamic efficiency of the blade leading to lower annual energy production (AEP) [12]. Studies have shown that deeply eroded blades can result in as much as a 20% reduction in the rated power of the turbine [13].

WDE is also observed in carbon steel pipelines used in nuclear/fossil power plants and is known to cause the so-called wall-thinning [14]. This usually happens when accelerated flow of steam passes through orifices, impinging bent parts of the pipe. This eventually leads to the leak of the steam flow to the surrounding environment, as it was the case of the Onagawa power plant in 2007 [14]. 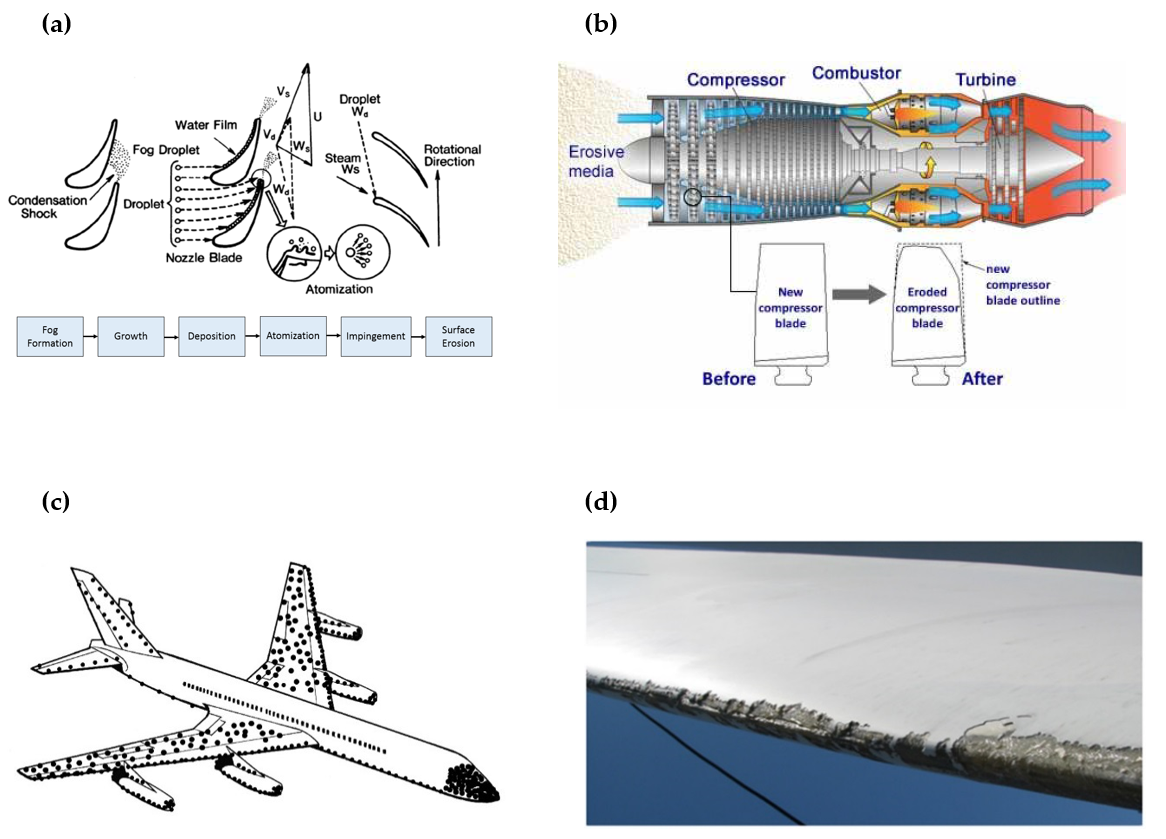 4. Physics and Mechanics of WDE

In theory, when a droplet impact a solid surface, two main events are responsible for introducing stresses into the target material; (i) impact pressure (also known as water hammer pressure) and stress waves it induces into the material, and (ii) lateral outflow or jet of the droplet and the accompanying shearing effects [17]. Figure 2 shows the pressure and shock wave behavior during the liquid-solid interaction.

In most of the cases, stresses due to a single droplet impact event are not enough to cause erosion damages. Rather, erosion damage is seen only after repetitive impacts during which stresses are being accumulated. So far, there is no erosion theory that successfully explains the interaction of the impacting droplets and accumulation of stresses due to repetitive droplet impacts. However, a long history of erosion experimentation has shown that water droplet erosion exhibits a strong time-dependency, i.e. it features different erosion rates at different time intervals, resulting in a nonlinear progression of damage [1]. This is usually presented in the so-called erosion graphs. Figure 3 shows a schematic of the typical (called s-shaped) erosion curve observed during water droplet erosion of most bulk materials. The curve is usually divided into five distinct regions or stages; incubation period (stage A) where there is only increase in the roughness of the surface due to the repetitive impact of the water droplets without measurable material loss; Acceleration stage (stage B) where micro-pits coalesce, which leads to an increase in the size of the crater; Steady State maximum erosion rate (stage C) where the erosion rate is maximum and remains constant for relatively long period. This stage of constant erosion rate is known as steady state maximum erosion and it is very important in characterizing the erosion damage; Attenuation or deceleration stage (stage D) where the erosion rate starts to decrease (usually 25 to 50% of the maximum erosion rate [1]) due mainly to the high roughness and irregularities encountered in the erosion crater, which effectively change the stress distribution, and therefore reduce the erosion rate. The deceleration of the erosion rate continues until it once again becomes constant in the terminal stage (stage E). 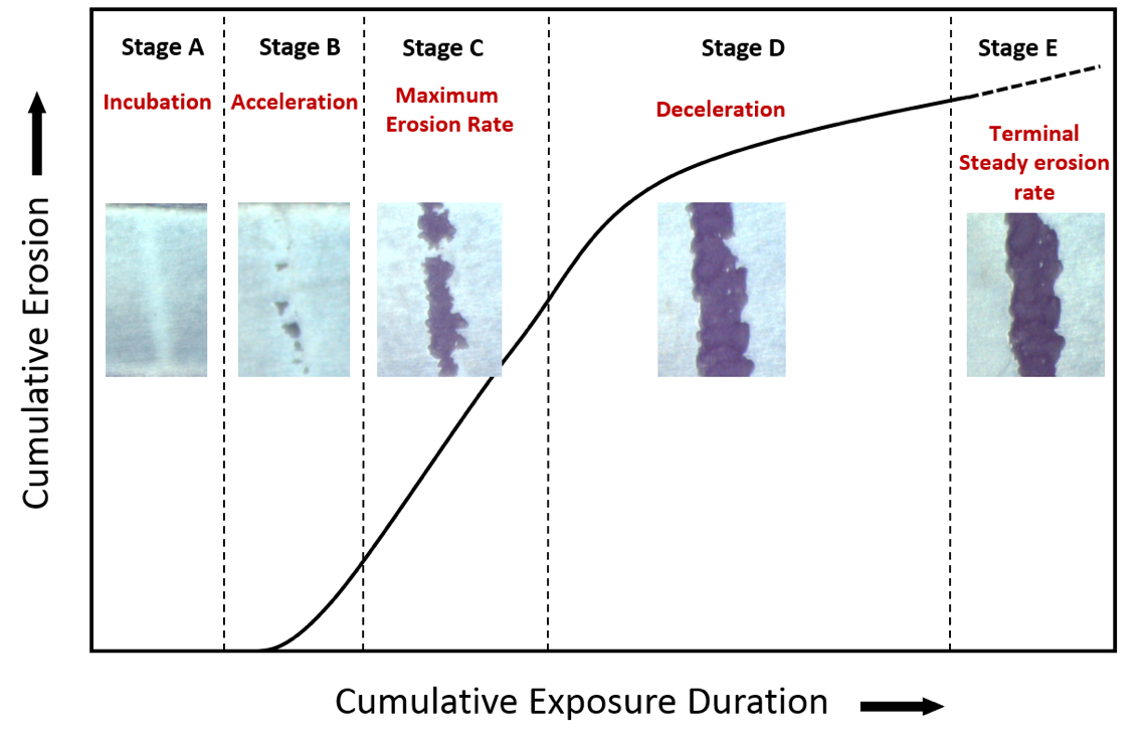 Extensive research has been carried out to understand the mechanisms responsible for the initiation and progression of erosion damage due to single or multiple droplet impacts. Erosion damage seems to have regimes of damage mechanisms. That is, the erosion damage mechanism that is operative depends largely on the impact conditions (especially impact velocity) and the dynamic response of the target material [18]. The initiation of erosion is often seen as an important issue and range of explanations has been given to describe the sequence of events that lead to the beginning of weight loss in the material. Erosion initiation and progression can be explained as a result of one or more of the following mechanisms [18]:

Droplet impact erosion process is significantly influenced by impact parameters such as impact velocity and droplet size as well as target mechanical and surface properties. This is because erosion parameters and target properties dictate the amount of water hammer pressure, stress waves amplitudes and speeds, and lateral jetting, which in turn control the nature and mechanisms of erosion damage.

Studies indicated that the impact velocity is the most influencing parameter on water droplet impingement erosion [19]. Experimental data revealed that erosion rate is exponentially proportional to impact speed with an exponent value that can reach up to 10 [20]. Impact angle is equally important and often related to its influence on the impact speed. Ahmed et al. [21] demonstrated that 90° impact angle caused the maximum erosion damage for the same time of exposure. This is because 90° impact angle corresponds to the maximum normal component of the impact velocity.

Droplet size has significant effects on WDE behaviour as it influences the distribution of the impact pressure, the area exposed to the impact (impact zone), the transferred kinetic energy, and time duration of each impact pulse. According to the pressure-wave erosion theory, larger droplets are likely to cause more erosion than smaller ones for the same total volume of water [1]. Surface properties of the target material are of equal importance. The initial surface condition has a great influence on the initiation of the erosion [22]. Moreover, the existence of liquid film on the target surface has a cushioning effect on liquid impact erosion. This because impact pressure as well as shear damages caused by lateral jetting are greatly reduced by the liquid film [23].

Mechanics and Damage Modes: Fundamental studies devoted to understand the physics and mechanics of water droplet erosion are needed. This is because other research aspects, such as protection, treatments, and modelling of WDE depend largely on the accurate understanding of erosion mechanics.

Correlation between Experimental Testing and Real In-Service Erosion: Until now, accurate correlations between erosion performance at testing scale and real in-service performance have not been developed. This has, in some cases, rendered the accelerated laboratory scale data useless to turbines manufacturers. The main obstacle of undertaking such research investigation has been the difficulty of accurately assessing the impact conditions (speed, droplet size, frequency, etc.) encountered in the real in-service application.

Leading Edge Protection Materials for Wind Turbine Blades: Development of leading-edge protection materials is particularly important because the range of impact speeds involved in current wind turbine blade erosion is relatively small compared to other erosion applications. Consequently, a protection material with impact threshold velocity higher than that encountered in the blade while of course still having light weight can be sought.