Small Extracellular Vesicles are lipid bilayer structures ranging in size from 15 to 10,000 nm, are released from almost all cells (normal and cancerous) present in body fluids, and they are considered as delivery vehicles responsible for local and distant cellular communication.

In the late 1960s, the role of EVs was thought to be limited to the export of cellular waste products, first discovered during the programmed enucleation of maturating red cells in sheep [1]. Since then, considerable efforts were made to study the biology of EVs, and today they are becoming a major focus as regulatory molecules in health and disease. In cancer, tumor-derived EVs have been implicated in cell–cell communication and the transfer of information between malignant cells and cells of the microenvironment [2]. They carry molecules that are completely different from those released by EVs originating form healthy counterparts [3]. Therefore, tumor-derived EV cargo molecules (also known as bioactive molecules carried by EVs and delivered to the surrounding cells) are considered unique markers, and are released by tumors to increase proliferation, metastasis [4], and immune escape by remodeling the microenvironment in favor of disease progression [5]. In hematological malignancies where the cancerous cells generated from blood-forming tissues are highly heterogenous, there is a lack of sufficient monitoring tools for adequate diagnosis and treatment [6]. Therefore, novel non-invasive clinical approaches are being developed for proper diagnosis and monitoring of disease progression and response to treatment [7]. EVs are considered strong, minimally invasive diagnostic biomarkers for malignancies because of their capacity to carry biologically active molecules that reflect the cell of origin and their ability to protect their cargoes from nucleases and protease activity. They were extensively studied in solid tumors [8][9]; however, in hematological malignancies, they are in the process of being defined.

EVs are important mediators of cell–cell communication at short and long distances, both in health and disease. In hematological malignancies, through the release of small EVs, malignant cells interact with a large number of cells, including cells of the tumor microenvironment that substantially support disease progression by inducing tumor drug resistance and immune suppression. EVs released by malignant cells or cells of the microenvironment contain a large repertoire of tumor-specific cargoes, including antigens, oncogenes, and onco-microRNAs, among others, as summarized in this review (Figure 1). This considerable range of tumor-specific EVs that reflects the cell of origin makes them potential therapeutic targets. However, broad suppression of EV biogenesis or release may be a double-edged sword, given the critical role of EVs released by healthy cells in maintaining normal physiological responses [10]. For that reason, advanced technologies for EV-selective and specific targeting based on the molecular properties of their cargoes are absolutely needed. Although the molecular mechanisms involved in EV biogenesis and release have been described, the identity of vehicle surface molecules involved in guiding the route of EVs to specific target cells will be critical for the development of selective targeted therapies for EVs. In addition, tumor-derived EVs are highly abundant in biofluids, and their content is completely different from that of EVs released by non-cancerous cells. These unique features seen in several hematological malignancies make them potential biomarkers for diagnosis, prognosis, disease progression, and therapy resistance. Although pre-clinical studies have shown the importance of EVs in the context of liquid biopsies of hematological malignancies, veritable clinical applications are waiting for validation in large prospective clinical trials. The potential uses of EVs have been confirmed in several phase I and II clinical trials in solid tumors [11][12][13]. However, no single clinical trial has been conducted so far in blood cancer. In light of the importance of liquid biopsies in hematological malignancies, initiation of clinical trials of the prospective uses of EVs is an urgent need. 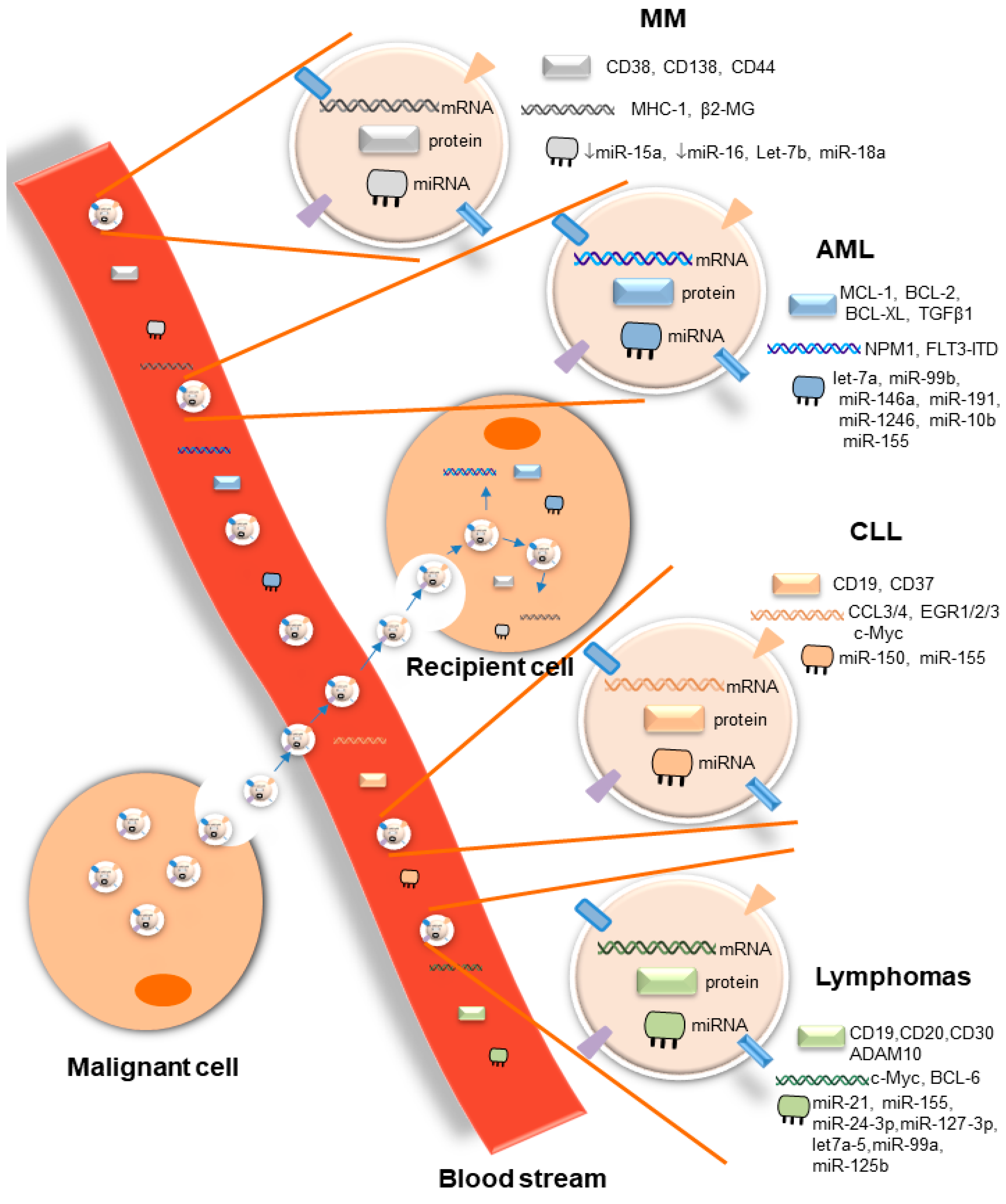 Figure 1. Diagram showing circulating EVs released from a malignant cell to the bloodstream containing bioactive molecules (proteins, mRNAs, microRNAs) that serve as both biomarkers of disease and therapeutic targets in the most prevalent hematological malignancies: MM, AML, CLL, and lymphomas. Once in the blood, EVs either release their contents or mediate a cell–cell communication at a distant site, where they are taken up by a recipient cell. The internalized EVs discharge their cargos, which induce changes in the physiological landscape of the recipient cell, resulting in tumor growth and/or drug resistance. The recipient cell could be either a hematopoietic cell or a cell of the bone marrow microenvironment.

Overall, several questions remain to be answered in the field of EVs. One major challenge is to better understand the in vivo impact of tumor-derived EVs on the different components of the host immune system relevant to cancer progression, as well as the molecular mechanisms responsible for target cell specificity and routes of cellular uptake.

Small extracellular vesicles (EVs) are a heterogenous group of lipid particles released by all cell types in physiological and pathological states. In hematological malignancies, tumor-derived EVs are critical players in mediating intercellular communications through the transfer of genetic materials and proteins between neoplastic cells themselves and to several components of the bone marrow microenvironment, rendering the latter a “stronger” niche supporting cancer cell proliferation, drug resistance, and escape from immune surveillance. In this context, the molecular cargoes of tumor-derived EVs reflect the nature and status of the cells of origin, making them specific therapeutic targets. Another important characteristic of EVs in hematological malignancies is their use as a potential “liquid biopsy” because of their high abundance in biofluids and their ability to protect their molecular cargoes from nuclease and protease degradation. Liquid biopsies are non-invasive blood tests that provide a molecular profiling clinical tool as an alternative method of disease stratification, especially in cancer patients where solid biopsies have limited accessibility. They offer accurate diagnoses and identify specific biomarkers for monitoring of disease progression and response to treatment.