Air may contain suspended microdroplets of liquid, solids and living substances, such as microorganisms. A range of biological agents including plant cells, dust, parasites, bacteria, yeasts and moulds and viruses can be found in the air [1]. Different pathways, which can release microorganisms into the aerial environment, include wind, air flow, rain and water splashing, organic matter and dust release from surfaces.

Several studies have reported airborne microbial transfer in food production environments. For example, airborne bacteria presented an increase in 25- to 30-fold after rain in production fields [2][3]. Additionally, a study showed the possibility for Salmonella to be carried through the rain and air and further contaminate tomatoes at high levels [4]. These pathogenic bacteria have been found in the air of poultry [5] and pig production environments [6], and that has also been stated as a significant pathogen for rapid transmission through the air in turkey [7] and pigs [8].

Air is well recognized as a source of microbial contamination in food production facilities. The aerial microbial load and diversity will be impacted by the microbial contamination on the raw intake materials, the air-flow within the plant, movement of people, and the length of time the product is exposed to air. There may also be direct interaction of the product with the air, if air is used for cooling or fluming of the product. The microbiota present in the air has the potential to cause foodborne disease and reduce the shelf-life of the food products resulting in potential food safety issues and economic loses for the food industry [3][6][8].

Nowadays, the monitoring of the air for microbial contamination in the food industry has been accepted as an important standard quality control, therefore, food producers are including it as part of their Hazard Analysis Critical Control Point (HACCP) system [1]. This fact shows the great importance of airborne route as a potential cause of microbial contamination. The microbiota in the air can vary significantly in both composition and concentration between food factories, in different areas within a food plant depending on the activity carried out there, i.e., clean/dirty areas, being bacteria most frequently found than other types of microorganisms in the food-processing air [9].

The survival of airborne microorganisms indoors is significantly influenced by several environmental factors. These factors include temperature, relative humidity (RH), atmospheric gases, ultraviolet irradiation and surrounding organic material [10][11]. Air temperature and RH are the factors that most affect the persistence and spread of airborne microorganisms indoors [12]. Some pathogenic bacteria such as Salmonella [6][13], Escherichia coli [14] and Listeria [15] are able to survive in the air and have the potential to contaminate food products due to their high tolerance to environmental factors.

The presence and concentration of bacteria, yeasts and mould spores in food facilities may be due to: raw materials, movement of equipment, small distance between areas, open drains, high levels of moisture, plant layout, people movement in an area, poor hygiene and dust (Figure 1) [9]. 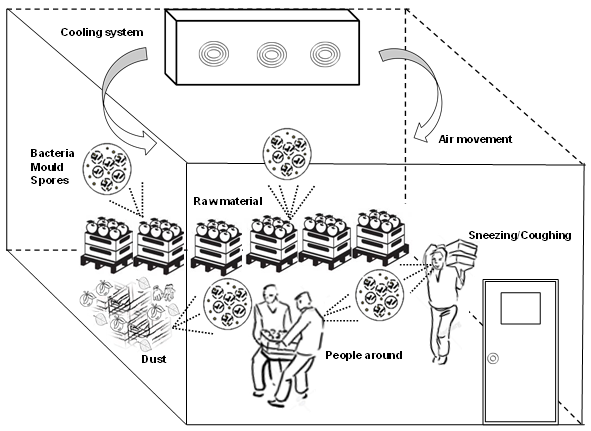 From a food processor perspective, it is essential to know if the contaminated air is a potential source of contamination for the food product. Burfoot et al. [19] observed that the airborne bacteria from evisceration room did not increase the high levels of bacteria on the poultry carcasses. In another study, Burfoot et al. [20] reported that surface contacts were more important for carcasses contamination than airborne bacteria in cattle and lamb slaughterhouses. However, other studies highlighted the importance of airborne contamination on beef carcasses [21][22].

Therefore, air can be recognized as a vector for microbial contamination in a range of food processing plants, including dairy [23], fruits [24], pork [6], poultry [19] and beef [20].

As detailed above, microbial air contamination can occur at various points during food processing and via different transmission routes. However, there is little research on the air quality in food chill environments. It is documented that there can be a significant level of aerial microorganisms, providing a source of food contamination, which could negate the impact of any prior intervention step.

Okraszska-Lasica et al. [25] examined the levels of bioaerosols in Irish beef and sheep factories and showed mean total viable counts (TVC) of 1.75–2.34 log cfu/m3 in the chill room, highlighting the potential of air as a source of carcass contamination during chilling. Authors observed high levels of airborne TVC from a chilling (3.28 log cfu/m3) and a spray-chilling (4.16 log cfu/m3) rooms, in poultry slaughtering and processing plants. Enterobacteriaceae counts were found at 2.02 log cfu/m3 in the air-chilling and 2.06 log cfu/m3 in the spray-chilling room [26]. In another poultry abattoir, airborne bacteria in chilling facilities were also examined [27], and the authors reported that the microbial load in the air of two poultry plants was quite different, consisting mainly of Micrococcaceae and Gram-positive irregular rods.

Regarding fresh produce storage facilities, postharvest pathogenic spores originated from infected fruit and vegetables can be considered the source of air contamination in packinghouses [28]. Penicillium, Alternaria, Cladosporium, Fusarium and Botrytis are the most severe postharvest diseases and cause serious losses during storage period.

Recognising that indoor air can be a vehicle for food contamination, this review will look for current applications of aerial decontamination in the chill room and potential challenging approaches that can be applied. It is considered that current systems may not be completely effective and environmentally friendly, therefore, it is of great significance to consider the development of nonresidual and verified decontamination technologies for the food industry and, in particular, for the cold storage rooms.

Considerable evidence exists that environmental contamination with airborne microorganisms poses a risk for air–food transmission of these organisms. There are a number of promising treatments for food cold storage decontamination. The majority of these have low toxicity to humans and/or do not produce harmful by-products. In most instances, they are already in commercial and industrial use in the food industry or other sectors. Various companies are involved in design and development of novel decontamination techniques for food production facilities, namely, air ionization, ozone, ClO2, H2O2, with clear advantages over conventional techniques. These approaches will, however, require optimization for specific food application as well challenges regarding regulatory/legislative approval. Although current room decontamination methods might aid in controlling air contamination, there is still a need to promote the development of new practices or technologies in order to improve the whole room decontamination. The upsurge of microbial resistance to antibiotics and pesticides has increased the attention on novel technologies as alternative antimicrobial treatments.

In some cases, scale up is an additional challenge for emerging technologies to be used in food industries. Research has to focus on different practical aspects of these techniques, including their impact on product quality and the economic costs.

There are a few studies in the literature assessing the efficacy of new methods for air decontamination; therefore, it is reasonable to continue research on their application. In addition, it will be useful to undertake studies on the cost effectiveness of the different technologies in order to facilitate their selection as a possible room decontamination technique. Furthermore, if new studies in this field continue to demonstrate good and consistent results, the introduction of these technologies should be considered for cold room decontamination in food facilities. Additionally, from the point of view of a food stakeholder, depending on the type and stage of food production operation, control of the aerial microbial is very challenging. However, it can be managed by continual air monitoring for microbial contamination together with an appropriate planning of HVAC (Heating, ventilation, and air conditioning), doorways, limitation of people movement inside rooms, supported by an appropriate air decontamination technology.