Zeaxanthin and Photoprotection in Plants

Conversion of sunlight into photochemistry by plants depends on photoprotective processes that allow safe use of sunlight over a broad range of environmental conditions. This entry focuses on the universal use by plants of the photoprotector zeaxanthin that is part of a group of three interconvertible leaf carotenoids collectively known as the xanthophyll cycle. We survey the striking plasticity of this photoprotective process in nature that can be fine-tuned to produce a fit for different environments with various combinations of light, temperature, and other factors.

Carotenoids are responsible for the yellow or orange color of egg yolk[1], corn kernels[2], vegetables and fruits[3][4], and flowers[5][6]. The largest fraction of carotenoids, however, is masked by chlorophyll in photosynthetic organisms, and is revealed only when chlorophyll is degraded – for instance when leaves (e.g., aspen and cottonwood) change color from green to yellow or orange during the autumn in seasonally cold regions[7][8]. Carotenoids support a photosynthetic organisms’ unique task of using sunlight to make food, fuels, and other important molecules under the wide range of different, and continuously changing, light environments encountered in nature. Some of these carotenoids are essential micronutrients for humans. In addition to β-carotene’s role as provitamin A in human vision and immune function, essential roles are emerging for other carotenoids, such as zeaxanthin that is a key factor in vision protection, an anti-inflammatory agent, and also supports brain function and performance of complex mental tasks (for a review, see[9]).

Figure 1 illustrates how a light signal emitted by plants as chlorophyll fluorescence can be used to track how much of the absorbed light is utilized in photosynthesis (photochemical route) and how much is preemptively removed as harmless thermal energy through a highly regulated non-photochemical route. Build-up of any remaining excitation energy – not promptly removed via either photosynthesis or regulated non-photochemical routes – results in formation of singlet oxygen, which can trigger cascades ranging from (i) production of signals that upregulate evasive responses to (ii) inactivation of the photochemical reactions and, eventually, (iii) programmed cell death (for a review, see[10]).

Figure 1. Possible fates of excitation energy once a photon of light is absorbed by a molecule of chlorophyll (Chl) resulting in conversion of ground-state Chl to singlet-excited state 1Chl*. When light is not saturating for photosynthesis, the majority of Chl molecules pass their energy to neighboring Chl in a photochemical route (green), while returning to ground-state Chl. As light levels become increasingly excessive, the extra excitation energy is increasingly dissipated preemptively as thermal energy via a regulated pathway (nonphotochemical route; red) catalyzed by zeaxanthin. When the combined levels of photochemical and regulated nonphotochemical routes are insufficient to swiftly de-excite all singlet-excited Chl, it drops to the triplet excited state 3Chl* and excitation energy builds up transiently (purple) leading to formation of oxidants (not shown). A small percentage of Chl molecules return to ground state directly from the singlet-excited state (wavy line), emitting fluorescence (F).

The toggle switch of the photosynthetic apparatus to a state of strong, preemptive thermal energy dissipation involves careful control to ensure return to efficient light utilization in photosynthesis whenever possible. In addition to the mere presence of zeaxanthin, a second condition is required before thermal dissipation of excitation energy proceeds. Figure 2 illustrates this dual control consisting of (i) zeaxanthin formation in the xanthophyll cycle and (ii) engagement of zeaxanthin in the thermal dissipation of excess excitation energy. As an alternative to thermally dissipating large amounts of unused absorbed light energy at peak irradiance, a leaf could simply produce a lot less chlorophyll. This would, however, diminish the leaf’s ability to collect light efficiently during long low-light periods of the day in morning and afternoon. 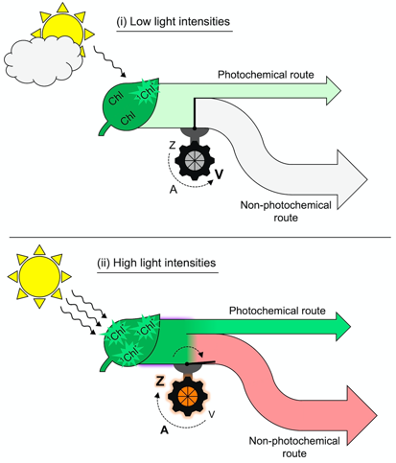 Figure 2. Schematic depiction of (i) absorption of low levels of light by chlorophyll (Chl) and allocation of that excitation energy to a moderate rate of photochemistry (light green arrow) coupled with conversion of zeaxanthin (Z) to violaxanthin (V) through the intermediate antheraxanthin (A) and closure of the route to regulated non-photochemical energy dissipation versus (ii) absorption of high levels of light by Chl and allocation of more excitation energy to photochemistry (dark green flux) coupled with conversion of violaxanthin (V) to zeaxanthin (Z) through the intermediate antheraxanthin (A) and opening of the path to regulated non-photochemical energy dissipation resulting in emission of a large fraction of absorbed light as thermal energy (light red arrow). 1Chl* = singlet excited state chlorophyll.

3. Leaves Track Changes in Light Level Over the Course of the Day with Adjustments in Xanthophyll Cycle Conversion State

Figure 3 shows carotenoid levels in the leaves of two plant species, a fast-growing weed and a slow-growing evergreen, growing side-by-side in full sunlight[11]. Fast-growing species have higher maximal rates of photosynthesis[12]. Sun-exposed leaves of both species formed zeaxanthin every day as light intensity rose from morning to midday, and then reconverted zeaxanthin to violaxanthin in the afternoon as light levels declined again (Figure 3A–D). However, the evergreen with its lower rate of light utilization converted a much greater percentage of the xanthophyll cycle pool to zeaxanthin than the herbaceous weed (Figure 3C,D; for a review, see[13]; for a comparison of evergreen versus drought-deciduous oaks, see[14]). These field observations show that xanthophyll cycle conversions follow light level on a daily basis in high-light environments – even in fast-growing plants that utilize much of the harvested light for photosynthesis and growth. In contrast to the three xanthophylls of the xanthophyll cycle, other carotenoids (lutein, neoxanthin, and β-carotene) remained unchanged over the course of the day (Figure 3E,F) despite pronounced changes in light level striking the leaf. One may ask whether evergreens grow more slowly because they are less efficient at using absorbed light or whether their slower growth rate limits how much light they can utilize at peak irradiance. The fact that maximal photosynthesis rate is subject to control by demand from the rest of the plant for the sugars produced in photosynthesis[15][16] suggests that a lower demand for the products of photosynthesis in the slow-growing evergreen decreases the fraction of light absorbed at peak irradiance that is made available for utilization in photosynthesis. 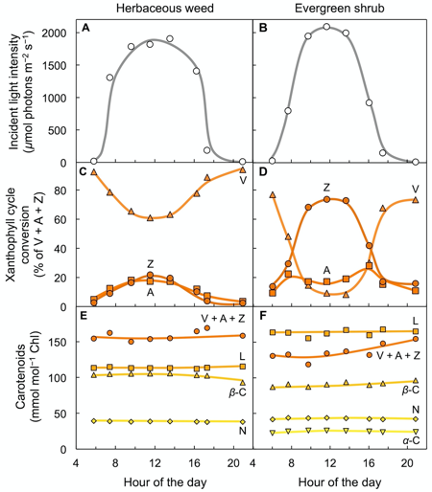 4. Environmental Factors Other than Light can Influence the Xanthophyll Cycle: Seasonal Cold

Such dynamic patterns are typically observed in locations where soils do not freeze for prolonged periods in the winter. In contrast, in a high-altitude, subalpine environment where soil water freezes for the entire duration of the winter, overwintering conifers and other evergreens maintained a state with continuously maximal xanthophyll cycle conversion to Z + A and negligible availability of absorbed light for utilization in photochemistry throughout the entire winter season[13][18][19][20][21][22][23]. This trend is thought to be prerequisite for maintaining evergreen status (with green leaves) throughout a whole season with extreme conditions[13][23][24]. In the spring, these evergreens reverted to low predawn xanthophyll cycle conversion and high utilization of absorbed light for photosynthesis in morning and afternoon within a few days upon soil water thawing[25]. Maintaining green leaves over the winter allows subalpine coniferous forests to quickly resume activity and perform 90% of their annual carbon gain in the month after soil-water thawing and snow melt when water availability for growth is maximal[26] – as opposed to deconstruction and rebuilding of whole leaves in winter-deciduous species. 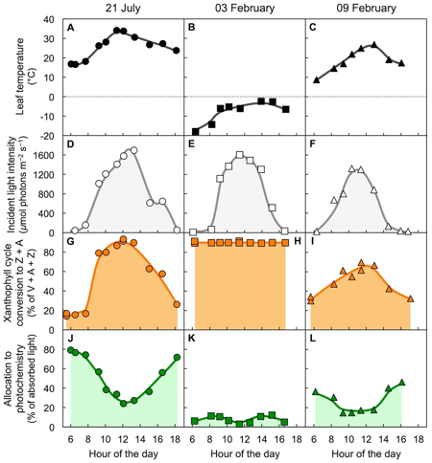 Figure 4. Characterization of (A,B,C) leaf temperature, (D,E,F) light incident on the upper leaf surface, (G,H,I) percent of the xanthophyll cycle present as zeaxanthin and antheraxanthin (Z + A), and (J,K,L) percentage of absorbed photons that is made available for utilization in photochemistry (quantified from chlorophyll fluorescence as photosystem II efficiency) in leaves of the woody evergreen Euonymus kiautschovicus on a warm day during summer (A,D,G,H; circles), on a cold day in winter (B,E,H,I; squares), and a subsequent warmer winter day (C,F,I,L; triangles). V = violaxanthin. Data from Verhoeven et al.[17].

5. Environmental Factors Other than Light can Influence the Xanthophyll Cycle: Seasonal Heat/Aridity

In addition to its role in the dissipation of excess light through the regulated non-photochemical route, zeaxanthin has a second role in plants as a membrane stabilizer that may be critical at hot temperature where membrane fluidity can rise to dangerous levels[27][28][29][30]. Zeaxanthin’s role as a membrane stabilizer appears to be its main role in animals, especially for its functions as an anti-inflammatory opposing systemic chronic inflammation and as an enhancer of visual and mental acuity[9].

In a desert evergreen that can persist through extremely hot, dry summers, xanthophyll cycle conversion to Z + A was continuously maintained at near maximal levels day and night[31]. This response is different from that seen under cold-temperature stress. The existence of two separate control mechanisms (biochemical zeaxanthin formation and biophysical engagement of dissipation of excitation as thermal energy) may allow maintenance of continuously high levels of zeaxanthin without concomitant lasting depressions in the fraction of absorbed light available for utilization in photochemistry under some conditions, such as heat (see also[14][32]) or rapidly fluctuating light environments in the shade under a forest canopy where leaves can also show continuous maintenance of high zeaxanthin levels associated with very rapid increases and decreases in dissipation of excess light as thermal energy[33][34].

Plants’ ability to convert sunlight into photochemistry, and to handle sunlight safely over an extreme range of environmental conditions, is key to the function of the biosphere and human society. Our summary illustrates the universal use by plants of xanthophyll cycle-based photoprotection and the striking variety found in nature with respect to (i) xanthophyll cycle pool size, (ii) degree and speed of interconversion of its components, and (iii) flexibility in the association between xanthophyll cycle conversion state and dissipation of excitation energy as thermal energy. It appears that the different components of this system can be independently tuned with a high degree of flexibility to produce a fit for different environments with various combinations of light, temperature, and other factors. In addition, the role of genetic variation is apparent from the variation in the response of different species growing side-by-side in the same environment. A better understanding of the levers that allow uncoupling of zeaxanthin accumulation and retention from the dissipation of excitation energy through the regulated non-photochemical route may serve in the co-optimization of crop yield and zeaxanthin content as an essential human micronutrient (see [35]).