Climate change is now an established fact. Global temperatures, precipitation, wind patterns and other weather phenomena are altering. Like all objects exposed to the atmosphere, cultural heritage buildings must face the effects of these changes. There may be direct results on the materials used in construction (chemical and physical degradation), but environmental factors also influence the microorganisms in the surroundings, and these can also cause weathering (biodeterioration and biodegradation). Microbial cells that impinge upon buildings, colonize them and produce biofilms (sometimes called “patinas”) on their surfaces are encouraged or inhibited by changes in local climate. The changes most likely to affect microbial growth are increased temperature, rainfall and air pollution, all of which are set to rise over the next decades [1], and references therein]. Most deteriorating organisms will benefit from the warmer and wetter environment, leading to faster and less predictable deterioration. Airborne pollutants associated with climate change may act as additional food sources [2], or, inversely, may inhibit microbial growth [3]. Conservation scientists require a knowledge of the potential effects of microorganisms, and the resultant growth of macroorganisms such as vascular plants, in order to formulate effective control strategies.

Colonization of stone by microorganisms

Bioreceptivity, the ability of a material to be colonized by living organisms [4] defines the properties of a building that attract and support biological colonization. It is a measure of the inherent vulnerability of the material to biological weathering. Chemical composition, porosity, and roughness of the building materials determine bioreceptivity and recently it has been shown that the color of the stone surface can also influence biofilm formation; a red-tinged granite (Rosa Porriño) was found to develop more algal growth than a grey-tinged Grissal granite in controlled trials [5].

The stone properties most likely to be influenced by future climate changes are porosity and roughness, both of which will increase with higher precipitation and wind levels. Changes in these properties will affect the vulnerability of the stone to microbial colonization. Vazquez-Nion et al. [6] suggested that granite has lower bioreceptivity than marbles, limestones, lime mortars, and many sandstones because of their lower porosity and Caneva et al. [7] also considered porosity the most important factor for stone bioreceptivity. Rougher textured surfaces such as brick are more vulnerable to microbial colonization because they present surface pits and depressions to accommodate and protect adhering cells [8].

Ortega-Morales et al. [9], however, in a meta-analysis of data from a variety of publications, determined that stone type (siliceous or calcareous) was a much less important factor in the colonization of historic buildings than environmental factors. Environmental factors like humidity and temperature obviously play a part in the colonization process. Clearly, the bioreceptivity of the surface will alter with time. As the stone weathers its surface will change because of environmental effects; physical and chemical actions will almost certainly increase the roughness of the surface, for instance, while the formation of the initial biofilm may either increase or decrease vulnerability to further colonization, depending on factors such as species present and whether large quantities of extracellular polymeric materials, which act as glues, are produced by the sessile cells.

To produce effective conservation strategies for preventing the biodeterioration of culturally important buildings, it is important to know which microorganisms are present on the surfaces, the energy sources they consume and the effects they have, not only on the stone itself, but also on further colonization by other microorganisms, higher plants and animals.

There have been a number of reviews describing the microbial biofilms present on cultural heritage buildings [9][10][11][12]. The first organisms to colonize a stone surface to produce the so-called “subaerial biofilms” [13] are those that do not require organic foodstuffs - the phototrophic algae and cyanobacteria [14][15][16].

2. Deterioration of stone buildings by microorganisms.

There are a number of ways in which microorganisms can affect the weathering of buildings exposed to the outdoor environment. The earliest obvious changes are probably discoloration of the surfaces. With the primary photosynthetic colonizers come a range of colors associated with their pigments (Table 1). These can confer colorations to the surfaces that were not intended by the architects.

Both algae and cyanobacteria can produce thick green biofilms in areas of high humidity (Figure 1), but in less wet areas the colors may vary, especially in the case of cyanobacteria (Figures 2 and 3). 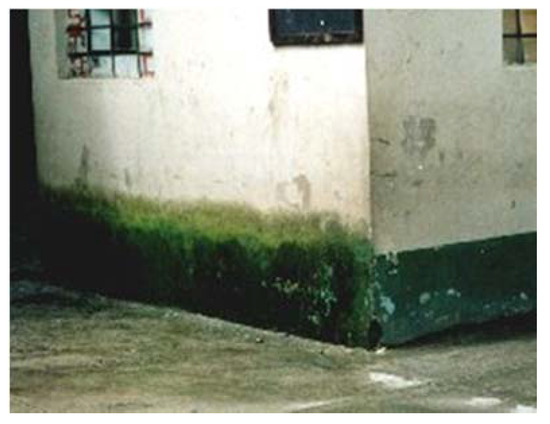 Figure 1. Heavy algal growth on the wet pediment of a building in Aguas Caliente, Peru.

Figure 2. (a) Black discoloration on a gravestone in Dom Khom, Laos, (b) the green/brown cyanobacteria (genus Scytonema) mainly responsible.

The level of humidity may be considered one of the most important factors determining the colonization of buildings. A study of microbial biofilms on two areas of the same historic fort in Niteroi, Rio de Janeiro, Brazil, showed that colonization below a leaking pipe was very different from that in a dry position protected from rain [17]. The former biofilm was dark green/brown and contained Chloroflexi, photosynthetic filamentous bacteria, as the preponderant group, while the dry biofilm was grey/light green and composed mainly of non-photosynthetic Proteobacteria. The relative lack of algal genera at the two sites was attributed to the absence of liquid water and the relative humidity of less than 100%, either of which has been said to be necessary for optimum algal growth [18].

The other factor of major importance in determining microbial colonization is temperature, which, of course, also affects the humidity of the surface. In the case of external surfaces, heating will be solar and thus its effects cannot be separated from those of UV irradiation. All microorganisms have their own preferred temperature ranges for growth; hence the composition of an external, mature, biofilm will vary according to the temperatures to which the surface is subjected. Generally, however, lower temperatures will lead to the development of thinner biofilms because of slower microbial growth rates, and very high temperatures will inhibit or even kill the cells, similarly leading to thinner biofilms. Some colonizing species are able to protect themselves from damaging UV in sunlight by the production of protective pigments (see Table 1). For culturally important buildings in the tropics and subtropics, these organisms are often particularly important as surface discoloring agents. Figure 2 shows a thick black subaerial biofilm composed mainly of the filamentous cyanobacterium, Scytonema. Its sheath contains the UV-protective brown pigment, scytonemin. Under conditions where there is little UV, the sheath remains colorless and the cells green, leading to a green biofilm even though the same genus is present. Another, more complex, example is seen in the dark surface patina from a parapet of the church of Nossa Senhora do Rosário in the sunny, elevated town of Ouro Preto, Brazil [9]. The biofilm was shown to consist entirely of the dark-sheathed filamentous cyanobacterium Stigonema ocellatum and the dark red encapsulated spherical genus Gloeocapsa. Gloeocapsa species with dark purple capsules have been identified in biofilms on other churches in the same state of Minas Gerais, in the Brazilian highlands, subject to high UV levels (author’s unpublished observations).

Not only cyanobacteria, but also some algae, can be responsible for non-green discolorations. An excellent example is the filamentous alga Trentepohlia. Although classified with the green algae, these cells are frequently identified when growing on external walls by their red coloration (Figure. 4), caused by carotene-containing oil droplets within the cells.

On the Rio Bec style Mayan buildings at Becán, Chicanná and Hormiguero (Campeche state, Mexico) it was found that red colorations caused by these algae were were predominantly associated with North- and East-facing walls (Figure 5), or on otherwise orientated sites protected by tree canopies or architectural elements [19]. On more exposed sites, grey-black discoloration composed of dehydration- and UV-resistant cyanobacteria (the most common being the coccoid genera Gloeocapsa and Chroococcidiopsis) was dominant.

Dark surface coatings can have physical, as well as aesthetic, effects. Biofilmed areas absorb more sunlight, thus increasing the physical stresses of temperature changes that lead to expansion and contraction of the stone surface. The darkening of the stone surface decreases its albedo, so that it experiences greater stresses through not only heating/cooling, but also wetting/drying cycles [20].

From the surface biofilm, microorganisms can penetrate within the stone, becoming endolithic. Many microorganisms have been detected, growing within all types of stone, with accompanying chemical and physical degradation; this includes phototrophs [21], other autotrophic and chemoheterotrophic bacteria [22], fungi [21] and lichens [23]. They are mostly associated with adverse environments, with extreme temperatures and droughts [24], and references therein]; endolithotrophy may be a microbial survival mechanism under such conditions. The alga Trentepohlia, mentioned above, has been shown to penetrate the surface of the limestone monuments of the Mayan buildings at Edzna, Campeche, Mexico, where UV levels are high and temperatures can be up to 36 °C; the black algal colonies caused pitting of the surface [25].

Gaylarde and Gaylarde [26] discuss the mechanisms whereby endolithic microorganisms induce the degradation of siliceous stone, citing historic buildings in Latin America where they have been detected, and Gaylarde et al. [27] report coccoid and filamentous cyanobacteria and algae, including Cyanidiales, growing endolithically in the facades of historic buildings of limestone, sandstone, granite, basalt and soapstone, as well as in some natural rocks. Figure 6 shows red autofluorescent cyanobacterial cells visualized by confocal laser scanning microscopy within a sample of soapstone from the church of São Francisco de Paula in Tiradentes, Minas Gerais, Brazil.

Endolithic organisms disrupt stone structure physically and by production of organic and inorganic acids [28], as well as by dissolution and remobilization of ions such as iron and manganese from the rock [29]. The arenitous sandstone of the Argentine missions was shown to have an outer layer enriched in Fe and Mn, produced by these biogenic processes [30], while the augen gneiss facades of churches in the city of Rio de Janeiro, Brazil, were found to contain endolithic filamentous cyanobacteria encrusted with neogypsum, redeposited after dissolution from the deteriorated crust [31]. Gypsum is one of the most highly damaging salts for rock structure [32]. It is only slightly soluble in water, but at higher pH values, as produced by actively photosynthesising phototrophs, it becomes even less soluble; thus gypsum solubilized at night by bacterial and fungal acids at the stone surface or near surface will be later redeposited as neogypsum around endolithic phototrophic cells. As these solubilization and reprecipitation cycles are repeated, the gypsum particles become larger and denser, disrupting the stone structure even more and increasing the possibility of spalling.

Lichens (Figure 7), symbiotic associations of fungi and phototrophic microorganisms (algae or cyanobacteria) with associated non-photosynthetic bacteria [33], are perhaps the stone biofilms most obvious to the general public and are often regarded as aesthetically pleasing. However, their small roots (rhizines) penetrate into the stone with obvious destructive effects. They also produce acids, sometimes called “lichenic acids”, the main one being oxalic acid. This is particularly damaging to carbonate stones, but can also affect siliceous rocks [34].

Figure 7. (a) White and yellow lichens (and green moss) growing on a tombstone in a country churchyard in the UK, (b) blue lichen growing into a rock close to aboriginal art in Australia, (c) white lichens growing on a stone head viewed through a sandstone window with a green biofilm above it, Bayon temple, Angkor Thom, Cambodia.

Lichens are poikilohydric organisms, able to increase or reduce their metabolism depending on water availability, and so are able to resist periods of drought, similar to cyanobacteria [2]. It has been suggested that lichens may protect stone surfaces from chemical and atmospheric attack [35], but this potential must be balanced against the inherently destructive nature of lichen growth.

All microbial groups may be involved in the biodeterioration of heritage buildings by colonization of their surfaces and physiological activities affecting their structure. Prevention of microbial deterioration is a difficult tariff, with considerable research effort being devoted to developing effective, yet environmentally acceptable control strategies.