The transformation of biomass and the utilization of all the by products derived from chemical conversion of biomass resources is one of the most important challenges nowadays. The impact in society and the level of awareness that already exists inside and outside the scientific community, makes the challenge of improving conversion of biomass to commodities a hot topic. Glycerol, a by-product obtained from the biodiesel production, is a key player compound due to its chemical versatility. The possibility of being used as solvent, reagent, reducing agent (in the polyol method), and so forth, makes glycerol an extremely appealing commodity. When used within nanotechnology, namely combined with nanomaterials, its potential becomes even higher.

Global warming is one of humanity’s major concerns in view of the continuous increase of greenhouse gas emissions that results from the anthropogenic activities (consequence of rapid population growing).

Currently, fossil fuels carbon sources (e.g., natural gas, oil, or coal) constitute over 80% of the world’s primary energy supply. As an outcome, the climate stability of the biosphere is affected with countless consequences. In December 2015, the 21st Conference of the Parties, COP21 (the United Nations conference on climate change), brought public awareness to the measures required to slow down global warming. Moreover, a framework to mitigate climate change was set, by agreeing on 17 SDGs—sustainable development goals. In addition, the Intergovernmental Panel on Climate Change (IPCC) set as an aim to keep the warming under 2 °C above preindustrial levels and to pursue efforts to restrict the temperature increase to a limit of 1.5 °C above preindustrial levels, whereas the European Union set the aim of reducing 80% of domestic emissions by 2050 (when compared to 1990) [1]. The use of greener fuels to address such envisaged goals is pointed out as one of the most promising solutions, unlocking a competitive, low carbon, and energy efficient future.

By using wastes and emissions as feedstock to produce fuels, a new sustainable alternative to traditional petrochemical feedstock processes (avoiding their uncertain availability, and their environmental concerns) can be attained, which is imperative, especially to the transport sector [2]. However, there is still much to overcome to achieve a cost-effective and operationally feasible methodology that can be incorporated in a biorefinery, where, through jointly applied conversion technologies, almost all types of biomass feedstocks can be transformed into different classes of bio- fuels and chemicals.

There are several methods to produce biodiesel that includes transesterification, blending of raw oils, microemulsion, dilution, and pyrolysis or thermal cracking. The predominant biodiesel production process, which is also the easiest route, being consequently the most cost-effective approach, involves a step of transesterification yielding glycerol (1,2,3-propanetriol, Figure 1) as a by-product [3].

Increases in biodiesel production in many countries, to replace the traditional petroleum-based energy have led to an excess of crude glycerol. This represents the main bottleneck in the biodiesel production chain. Simultaneously, such a glycerol surplus has created new challenges to its sustainable use. In fact, although available on the market at a very low cost, glycerol contains a number of impurities (e.g., un-reacted glycerides, water, methanol, free fatty acids, methyl esters and other organic materials or inorganic salts [4][5][6]), which affects its properties (biological, chemical, and physical) and therefore inhibits its direct usage in industries.

The composition of crude glycerol depends on the process used for the production of the biodiesel as well as on the nature of feedstock [7]. As such, there is a wide variety of potential alternatives to add value to glycerol, which fall into the following main categories of applications: (i) manufacture of commodities; (ii) production of polymers; (iii) production of biofuels and biogas; and (iv) use of purified glycerol. Thus, the multifunctionality of glycerol makes it a suitable bio-renewable platform chemical. Figure 2 presents different chemical reaction pathways of glycerol. 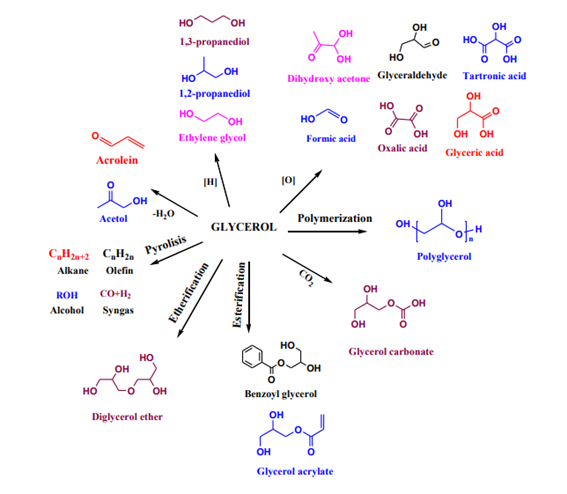 Glycerol is considered a particularly interesting building block to provide added-value bio-based compounds. In the chemicals market, the production of bio-based products has become a priority for the industries of plastics, solvents, lubricants, and surfactants. The forecast period of 2019–2027 [8] expects an increase at a compound annual growth rate (CAGR) of 16.67%.

The production of bio-based compounds offers an excellent alternative to reduce the dependence of petroleum-based feedstocks, to improve the environmental balance (decreasing CO2 emissions), to boost cleaner, more efficient, modern and future oriented industries, and to meet the increasing of consumers demand for healthier and safer products.

Besides the several pathways to obtain molecules derived from glycerol (Figure 2), there is a much less explored application of glycerol that can be as important and relevant as the currently most known ones: the production of nanomaterials. In fact, nanosciences and nanotechnology assume a pivotal role in the processes of accelerating the energy transition to the use of renewable sources through the development of new materials, which increase the efficiency of processes, rationalize the use of resources and raw materials, and help to reduce the costs.

The use of glycerol as solvent for the dispersion of metal oxide nanoparticles presenting catalytic abilities (Figure 3), increasing their lifetime, is also an emerging field of research. 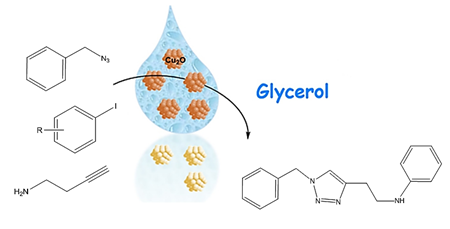 Figure 3. Example of the use of glycerol with nano oxides. Reproduced with permission from [9], published by Elsevier B.V., 2017.

In fact, glycerol has been successfully used as a solvent, a co-solvent with water, ethanol, and any other polar solvent, for the synthesis of a huge variety of nanomaterials [10][11]. Recently, it was reported that glycerol can act both as solvent and reducing agent [12]. Regarding the present environmental legislation as well as the substitution of the most often used sources of hydrogen, the use of glycerol turns out to be either economically appealing and a highly promising alternative to develop sustainable synthetic processes of materials [13][14]. Thus, the use of glycerol as solvent, co-solvent, and reductant is not only a fascinating area of research but is also gathering tremendous interest in the development of sustainable protocols (in line with green chemistry) for nanomaterials synthesis.

Despite the above-mentioned potential, the utilization of nanomaterials-based catalysts for scalable industrial processes is still highly challenging. In fact, the search for cheap and accessible non-noble metals exhibiting high activity, selectivity, and stability, is a crucial issue that needs to be addressed. In this regard, metal oxides appear as attractive alternatives to noble metal catalysts. In particular, the ability to tailoring both size and morphology of such metal oxides contributes significantly to improving their catalytic performance [15].

As stated previously, this work overviews the use of glycerol in the production of nano oxides than can be further used as catalysts in a glycerol oxidation process. Although glycerol oxidation is a well debated and published field due to the interest arising from being a biomass derivative, there is still a need for further studies in the research of a catalyst that can be cheap and robust. Metal oxide nanoparticles are quite stable and production methods are becoming simpler and easier to replicate. The possibility of using a solvent in the synthesis of nanoparticles that then becomes the target for a catalyzed reaction is a challenge, but it can be the solution for larger implementation of glycerol application and transformation. This “one-pot” procedure is a challenge that some researchers have started to investigate, and their findings are as follows.

Han et al. [16] studied the performance of different cobalt-based spinel oxide nanostructures (MCo2O4, M = Mn, Fe, Ni, Co, Zn, or Cu) as electrocatalysts in the conversion of glycerol into formic acid. According to the authors, the catalytic activity showed by the catalysts, in alkaline media, had the following order CuCo2O4 > NiCo2O4 > CoCo2O4 > FeCo2O4 > ZnCo2O4 > MnCo2O4. Based on this sequence, the authors used the nanomaterial with best catalytic activity and combine it with carbon fiber paper electrodes for the electrolytic oxidation of glycerol at a constant potential (1.30 V) versus the reversible hydrogen electrode; a glycerol conversion of 79.7% was achieved as well as a high selectivity of 80.6% towards formic acid.

Several mixtures of Cu oxides (CuMgAlO, CuNiAlO, CuMnAlO, CuFeAlO, CuCoAlO, and CuZnAlO) were analyzed by Zhang et al. [17] for glycerol oxidation employing two types of oxidants, H2O2 and O2. According to Table 1, the use of H2O2 as an oxidant leads to the highest conversion of glycerol, 33.6%, for CuNiAlO along with highest selectivity for formic acid, 57.2%. Concerning the use of O2 as oxidant, the major conversion of glycerol occurs with CuMnAlO, 34.5%, being glyceric acid produced with a selectivity of 53.6%.

Kaskow et al. [18] studied the catalytic performance of ZnO towards glycerol oxidation, being possible to observe a 10% conversion of glycerol, with the best selectivity, 45%, for glycolic acid.

Over the last five years, nano oxides are mostly used as catalyst support more than as the catalyst itself, in the oxidation of glycerol. Due to this, we decided to, as mentioned below, present some examples of it.

An example of glycerol oxidation is demonstrated by the work of Lakshmanan et al. which used CeO2-supported gold nanoparticles as catalysts to obtain lactic acid and glyceric acid as main products [19]. The authors observed that the ceria supported AuNPs (chemically reduced samples) are more efficient catalysts for the aerobic oxidation of glycerol when compared with hydrogen reduced samples due to the larger size of the AuNPs. The highest selectivity towards lactic acid, 83%, was achieved for 1% Au/CeO2, corresponding to a glycerol conversion of 98%.

According to Chornaja et al., in a separate study, alumina-supported palladium catalysts were used for the oxidation of glycerol to obtain mainly glyceric acid [22]. The authors proved, with the TEM technique, that the palladium exhibits a nano-size on the carrier surface. They could also conclude that the best catalysts for the oxidation of glycerol were 1.25% Pd/Al2O3 and 2.5% Pd/Al2O3.