The occurrence of biogenic amines in fish is directly associated with microorganisms with decarboxylase activity. These compounds are generally detoxified by oxidases in the intestinal tract of humans, but some conditions, such as alcohol consumption, enzyme deficiency, or monoamino-oxidase antidepressant use, can make their intake by food dangerous. Due to its toxicity, histamine is a unique biogenic amine with regulatory limits for fishery products. This review focuses on biogenic amines in fish, with a detailed picture of the number of alert notifications or intoxication events reported in the last years. The favoring conditions for their formation, as well as the main preventive and control measures to ensure public health, are also reviewed.

Biogenic amines (BAs) are nitrogenous compounds resulting from the free amino acid decarboxylation or the amination of carbonyl-containing organic compounds through the metabolism of different microorganisms. Thus, their accumulation in food can be considered a good indicator of spoilage [1]. BAs are distinguished based on chemical structure into heterocyclic, aliphatic, or aromatic compounds (Table 1), or based on the number of amine groups into monoamines (tyramine and phenylethylamine), diamines (histamine, putrescine, and cadaverine), or polyamines (spermidine and spermine) [2].

Table 1. Classification of biogenic amines based on chemical structure.

Fish products constitute an important part of the human diet because they are an excellent source of nutrients, including proteins, vitamins, salt minerals, and polyunsaturated fatty acids [3]. Nevertheless, they are very perishable due to postmortem modifications followed by the formation of spoilage compounds, such as organic acids, aldehydes and ketones, alcohols, sulfides, and BAs [4]. The inappropriate storage of fish and/or temperature abuse can lead to BA formation due to microbial enzymatic activities.

Gram-positive and -negative bacteria associated with fish spoilage can produce BAs. They are generally located on skin, gills, or in the gastrointestinal tract [5][6][7][8][9][10][11] (Table 2), and can spread to muscle tissue during butchering or gutting through rupture or spillage of gastric contents [12]. The most frequent species belong to Enterobacteriaceae and include mesophilic and psychrotolerant bacteria, such as Morganella, Enterobacter, Hafnia, Proteus, and Photobacterium [13]. Also, Pseudomonas spp. and lactic acid bacteria belonging to Lactobacillus and Enterococcus genera can cause BA formation [14].

The amounts of BAs ingested by food are regulated in the human organism by a detoxification system formed mainly by mono and diamino oxidases. High intake of BAs or the presence of factors such as the use of alcohol or medication that reduce the effectiveness of such detoxifying enzymes, rather than a genetic deficiency, can lead to intoxication with different symptoms depending on the type of BA. Histamine is the most toxic, as it can act as neurotransmitter and vasodilator, causing headache, hypotension, heart palpitations, asthma attacks, and cutaneous (edema and flushing of the face, neck, and upper arms) or gastrointestinal (difficulties in swallowing, vomiting, and diarrhea) effects [7]. Bronchospasm, respiratory distress, and vasodilatory shock are also described [15]. A detailed summary of histamine intoxication is reported in Table 3. Instead, tyramine may increase the cardiac frequency or cause respiratory disorders, but also nausea and vomiting, while phenylethylamine can be a migraine inductor. Further symptoms associated with tyramine and phenylethylamine are hypertension and cerebral hemorrhage. Even if putrescine and cadaverine are not toxic, they can potentiate the adverse effects of the above cited BAs, as they favor their adsorption or interfere with the detoxification system [16][17].

In the literature, several reviews are reported on BAs in fish. Some authors [2][6][18] described in detail the content of histidine in some fish species, the decarboxylation reactions, some indexes of quality, and toxicological effects of many BAs, not only histamine, alongside the presence of these compounds in various foods. Instead, the focus of this review is the statement of outbreaks reported in the Member States of European Union (EU) and the notifications of the Rapid Alert System of Food and Feed (RASFF). In addition, factors affecting BA formation are also discussed.

Histamine, tyramine, putrescine, and cadaverine are the most common BAs found in fish and derive from decarboxylation of corresponding free amino acids by microorganisms [18]. Their accumulation depends on the presence of the precursor amino acids, the growth or activity of decarboxylating bacteria, and a favorable environment. The main factors that influence the microbiota and its enzymatic activity are temperature, pH, water activity, oxygen availability, concentration of NaCl, some additives, and competition among microorganisms. The combination of these factors can be responsible of the variability of BA content within the same batch, and also within individual fish [12][19].

In the flesh of fish, BAs can be considered an indicator of good handling and storage procedures, and some authors reported different chemical indices for fish quality as combinations of amines [20]. However, the levels of different BAs are associated with the predominant muscle type in fish. Fish with dark muscles have more histidine content compared to those with white muscles, and therefore they accumulate more histamine when kept under elevated temperatures. On the contrary, fish belonging to the second category (white muscles) can show high cadaverine and putrescine concentrations due to poor handling, but also temperature abuse. For cephalopods, agmatine is used as a quality indicator, while in the case of crustaceans, shrimp, and lobsters, putrescine and cadaverine are considered [21]. Individual BA or a combination of various amines are considered as a quality index of fish freshness. Some authors reported that a histamine content lower than a value of 10 mg/kg denotes fish of good quality, while concentrations between 30 and 50 mg/kg represent important and definite deterioration, respectively [22]. Instead, the consumption of meals with histamine concentrations of 8–40 mg can cause only slight intoxication, while values of 40–100 mg or higher than 100 mg are associated with intermediate and severe intoxication, respectively [2]. The Food and Drug Administration (FDA) established a defect action level of 50 mg/kg for histamine (according to the revised Guidance in year 2020) [23], whereas the Commission Regulation (EC) No 2073/2005, which is currently in force, fixed maximum levels of 200 and 400 mg/kg for raw fish and fishery products subjected to enzyme maturation treatment in brine, respectively. These limits apply to the fish families Scombridae, Scomberosocidae, Engraulidae, Clupeidae, Coriphaenidae, and Pomatomidae, with high concentrations of free histidine in the muscle tissue. Some outbreak reports [24] and scientific studies confirmed that fish with low levels of the precursor amino acid showed no toxic histamine content in their flesh, whereas the opposite situation was described by Visciano et al. [25] in fish experimentally subjected to temperature abuse and belonging to the above cited families with regulatory limits.

Scombroid poisoning occurs worldwide and the largest numbers of such events are described in the United States, the United Kingdom, Australia, and Japan. Up to 40% of foodborne outbreaks reported in Europe and the United States can be ascribed to histamine intoxication [26]. In Table 4, the histamine poisoning and human cases in the EU from 2010 to 2018 are shown. Even if a positive trend was observed during the years 2010–2017, a sudden decrease was described in 2018, probably due to the lack of case reports from some Member States [27][28][29][30][31][32][33][34][35].

A Rapid Alert System for Food and Feed RASFF was organized among the EU Member States for the notification of risks to human health was established by the Regulation (EC) No 178/2002, with histamine representing one of the most common causes of such notifications. The list of notifying countries and the countries of origin of notifications for histamine presence in fish products from 2015 to 2020 are shown in Figures 1 and 2, respectively. Italy is the major notifying Member State, with a total of 74 alert or information for attention notifications, followed by France, with 33. Instead, the main origin of fish and fish products contaminated by histamine is linked to Spain (56 cases). Most notifications derived from the analysis of products showed high concentrations of histamine (Table 4), whereas some cases (n = 22) were associated with foodborne outbreaks generally occurring in the notifying country. The highest percentage of both alert (30.2%) and information for attention (34.4%) notifications reported a histamine content (Table 5) that slightly exceeded the maximum limits set by the Commission Regulation (EC) No 2073/2005. Instead, the highest values, i.e., >1000 or even >2000 mg/kg, referred to scombroid poisoning caused by chilled or canned fish, particularly regarding tuna species. In Figures 3 and 4, the fish species and types of fish products (i.e., raw or processed) involved in the RASFF reports from 2015 to August 2020 are shown. Tuna is the most representative species because it presents high concentrations of histidine in muscle tissue for its high speed and long duration swimming as predator fish [36]. Moreover, harvesting practices, such as longlining and gillnetting, can contribute to histamine formation due to the long period in which the fish remains in the sea before it is brought onboard the vessel. Such conditions are particularly dangerous for tuna species, which can generate heat into their body that exceeds the environmental temperature, thereby favoring the growth of histamine-forming microorganisms [23].

Figure 1. List of notifying countries and number of notifications for histamine presence in “fish and fish products” by the Rapid Alert System for Food and Feed (RASFF) from 1 January 2015 to 31 August 2020.

Figure 2. List of countries of origin with notifications of histamine presence in “fish and fish products” by the Rapid Alert System for Food and Feed (RASFF) from 1 January 2015 to 31 August 2020.

Figure 3. Distribution of histamine in fish species according to the Rapid Alert System for Food and Feed (RASFF) from 1 January 2015 to 31 August 2020. 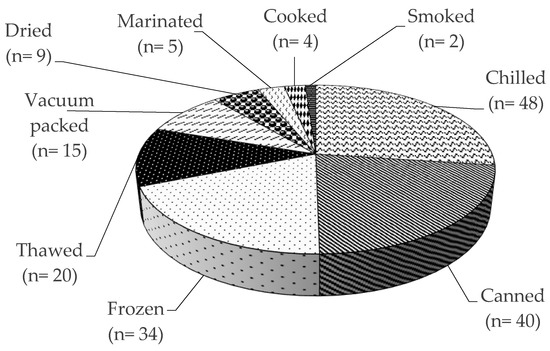 Figure 4. Presence of histamine in different fish products according to the Rapid Alert System for Food and Feed (RASFF) from 1 January 2015 to 31 August 2020.

Table 5. Histamine concentrations reported in “fish and fish products” by the Rapid Alert System for Food and Feed (RASFF) from 1 January 2015 to 31 August 2020.