Semiconductor materials include metal oxides, conducting polymers, carbon nanotubes, and 2D materials. Metal oxides are most often the first choice due to their ease of fabrication, low cost, high sensitivity, and stability. Some of their disadvantages are low selectivity and high operating temperature. Conducting polymers have the advantage of a low operating temperature and can detect many organic vapors. They are flexible but affected by humidity. Carbon nanotubes are chemically and mechanically stable and are sensitive towards NO and NH3, but need dopants or modifications to sense other gases. Graphene, transition metal chalcogenides, boron nitride, transition metal carbides/nitrides, metal organic frameworks, and metal oxide nanosheets as 2D materials represent gas-sensing materials of the future, especially in medical devices, such as breath sensing.

The air we breathe is composed of roughly 78% nitrogen (N2), 21% oxygen (O2), 0.9% argon (Ar), 0.03% carbon dioxide (CO2), and 0.07% other gases. Six pollutants have been identified as the main sources of air pollution [1]. In addition to lead and particulate matter, they include carbon monoxide (CO), nitrogen oxides (NOx), ozone, and sulfur dioxide (SO2). Carbon monoxide is an odorless and colorless gas released during burning. Outdoors it contributes to air pollution, while inside inhalation of large amounts is very dangerous for human health causing dizziness, confusion, unconsciousness, and ultimately death. The fuel burning in power plants and transport vehicles produces nitrogen dioxide (NO2). It affects both human health and the environment, causing asthma and acid rain. Sulfur dioxide is mainly the product of fossil fuel burning. The greenhouse effect (heating of the atmosphere) is caused by emission of high levels of greenhouse gases. According to the 2018 Inventory of U.S. Greenhouse emissions and sinks: 1990–2018 carbon dioxide (CO2) comprises 81%, methane (CH4) 10%, nitrous oxide (N2O) 7%, and fluorinated gases 3% of the greenhouse gases causing heating of the atmosphere (the greenhouse effect) [2]. Large amounts of carbon dioxide are emitted into the atmosphere through burning of fossil fuel, solid waste, and chemical reactions such as cement production. Methane is emitted during the production of coal, natural gas, and ores, from municipal solid waste landfills and livestock farms. Hazardous gases include acutely toxic, flammable, oxidizing, corrosive, pyropheric, and dangerously reactive gases. Acutely toxic are carbon monoxide, chlorine, nitrogen dioxide, and phosgene. Flammable gases include fuel flammable hydrogen, acetylene, ammonia, propane, propylene, and methane.

Gas sensors are widely used to detect low concentrations of flammable, explosive, or toxic gases and monitor environmental pollution [3]. Monitoring of gases, humidity, and moisture in the environment surrounding us, medicine, industrial processing, and agriculture is also very important [4]. One illustrative example of the application of gas sensors is sensing hydrogen (H2). It is the lightest of all elements and, at standard pressures and temperatures, colorless, odorless, and tasteless. It cannot be detected by human senses. Moreover, it is a highly combustible and flammable gas. With air, hydrogen forms an explosive mixture, which may be ignited in a spontaneous reaction. Hydrogen is applied as fuel and propellant in hydrogen powered vehicles and aerospace operations. Indirectly, hydrogen observation is important in a plethora of spheres ranging from everyday ones like detection of environmental pollution or indication of certain diseases up to an early sign of fire or reactor safety inside nuclear power plants. Hydrogen presence detection and concentration quantification is needed in semiconductor manufacturing and revealing of impending transformer failure in electric power plants. Very different, but equally illustrative examples are the so-called volatile organic compounds (VOCs), which are high vapor pressure organic chemicals. VOCs are both numerous and ubiquitous, and while some of them can cause harm to human health, others present a danger to the environment. Typically, harmful VOCs are not acutely toxic, but if generated inside houses may cause the “sick building” syndrome. Some of them can have compounding long-term health effects and are even carcinogenic. On the other hand, VOCs can also be found inside the human body. Particularly, a breath contains thousands of VOCs, which can originate from either within the body (endogenous VOCs) or from external sources such as diet, prescription drugs, or environmental exposure (exogenous VOCs).

Figure 1. Gas sensing in an internet of things (IoT) network.

The IoT platform (middleware) is flexible “glue” that combines platforms and manages all the interconnections between users, devices (in this case, gas sensor nodes), and applications [6]. Sensor nodes are usually connected in a local area network (LAN), which is the basic/first tier in IoT networking [7]. They are most often equipped by a proprietary or custom wireless local area network (WLAN) transceiver, which connects a node with the gateway [8][9]. It provides the internet access to cloud servers for data processing/storage and client devices using fixed and mobile broadband wireless communication networks (WiMAX, LTE, 5G, etc.) [10].

High sensitivity, fast response/recovery, and good selectivity are generally required of a good sensing material. Development of low cost and reliable sensing devices for the detection of gases, especially at room temperature remains a significant scientific and technological challenge. [11]. Gas sensors based on different sensing materials and methods can be classified according to the detection method. Variation in electric properties is one class of methods [12][13], while other sensing methods include optic, acoustic, chromatographic, and calorimetric gas sensors. When the surface of a semiconductor (metal oxide, carbon nanotube, conducting polymer, 2D material) gas sensor is exposed to the environment, gas interacts with the sensing material and changes its main physical parameters such as conductivity, permittivity, and work function, as shown in Figure 2.

The transducer, another element of the gas sensor, converts these physical parameters into electrical parameters such as resistance, capacitance, and inductance. It produces a sensing voltage or current signal, which magnitude, frequency, and phase can be measured [14].

Thus, in electrically transduced chemical sensors (such as semiconductor gas sensors) where the gas molecules directly interact with the sensing material these interfaces play a key role in defining the sensitivity, stability, and even biocompatibility of sensing devices [15]. The sensing material needs to be designed in such a way that it should have a large exposed surface available for interaction with gas molecules, suitable active sites for binding these molecules and the ability to effectively transduce these binding events into detectable signals. It is also highly beneficial when the mentioned physical effects result in relatively high conductance variability, further implying a higher sensor dynamic range. The sensing material also has to be of good mechanical properties for easy processing.

Semiconducting gas sensors were first used for single gas applications, having advantages that include tunable sensitivity and ability to determine the concentrations of specific constituents, including more recently low energy consumption. However, limitations in the form of high cross sensitivity and poor selectivity to some gases have a tendency to outweigh the advantages. Low precision and selectivity can be overcome by using different sensing materials and implementing multisensor arrays [16][17]. In an electronic nose system, the multiple sensor array component gives an electronic fingerprint response to a particular odor [18][19]. Combined with a pattern recognition module (information processing unit, pattern recognition software, and digital library database) it can recognize odors and discriminate between them. The main task is comparison of the distinct digital response pattern to an odor from a digital reference library database in order to identify and classify it, rather than quantify.

Recent research has focused on the multivariable response principle [17]. The basic concept of this principle is to design a sensor material with a multiple response mechanism to different gases, a multivariable transducer, and data analytics. The multivariable transducer is able to recognize different gas responses and provide independent outputs. Data analytics aims to provide (by multivariate analysis) multicomponent quantification, real with interference and drift. The most commonly implemented multivariate analysis methods include principal component analysis (PCA), discrimination analysis (DA), and artificial neural networks (ANN).

The requirements of modern sensors for IoT can be grouped concerning [17]: (1) reliability; (2) energy consumption; (3) cost; (4) communication capability; and (5) data security. Modern sensors have to be of low cost, so they can be massively applied, be reliable in the sense that they provide accurate readings in diverse environmental conditions, and consume less energy in order to extend battery life. They also have to provide real time communication capability and implement data security mechanisms.

Semiconducting oxides, also better known as metal oxides, are the most commonly used sensing material and still remain so [20]. Different oxide materials have been used and described in literature. Brattain and Bardeen [21] were the first to report on gas sensitive effects on germanium in 1952 making it the first semiconductor used as a gas sensitive material. In 1954, Heiland [22] noted that change in partial pressure of oxygen (or other gases in the atmosphere) had an influence of the semiconducting properties of zinc oxide. In 1962, Seiyama et al. [23] noted on zinc oxide thin films the phenomenon that adsorption or desorption of a gas on the surface of an oxide material changes its conductivity. In 1967, Shaver [24] first described the effects achieved by doping tungsten oxide thin films with noble metals, primarily platinum. In 1971, Taguchi [25] applied tin-oxide in the first commercial sensor (Figure 3). 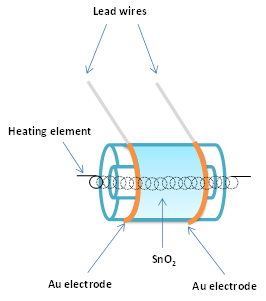 Figaro Inc. commercialized these devices as gas sensors monitoring the presence of hazardous levels of explosive gases in homes. They were widely used to prevent fires. This resulted in a widespread application of semiconductor gas sensors. Over time commercially produced metal oxide gas sensors have reduced in size being produced in different technologies, starting with tube-type sensors in the eighties of the last century, through screen-printed sensors produced in the nineties and completing with state-of-the art micro-electro-mechanical system (MEMS) sensors produced today. One of the big producers of metal oxide gas sensors, Figaro Engineering Inc., still sells some of the sensor designs produced in the 1980s. Application of advanced fabrication technologies has enabled sensor miniaturization and development of sensor arrays with enhanced selectivity and sensitivity [26].

Since the 1980s, research into different gas sensing materials has been quite intense and widespread. It has diversified from metal oxides that are still the subject of much research especially nanostructures, to conducting polymers [27], since 2000 to carbon nanotubes [28][29] and continued with their composites [30][31][32], and more recently 2D materials [33], as shown in Figure 4. The crystalline structures were drawn using VESTA [34]. These novel materials are still in the research phase rather than applied widely in commercial applications. In addition to promising properties, they have many shortcomings that need to be dealt with first. Application of conducting polymers is hampered by the fact that fabrication is complicated and time consuming. Due to oxidation, the lifetime of gas sensing devices based on conducting polymers is relatively short (9–18 months) compared to metal oxide gas sensors. In the case of 2D materials fabrication costs are also high and other problems are detection limits, poor selectivity, and slow recovery of the gas sensor baseline [35]. 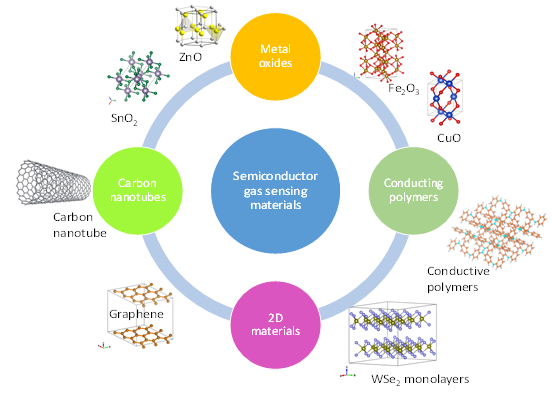