Bone healing process at the interface between bone and implant surface includes haemostasis, inflammation, proliferation, and remodeling. The modifications of titanium dental implant surface that are globally marketed focus on early bone response to switch more quickly from inflammation to proliferation by roughening the surface at the micro-scale. Microstructural modifications change cell behavior around the modified surface, successfully enhancing osseointegration, but they have their own limits. For example, such a modified surface cannot avoid implant failure resulting from shear force because of the occlusal load on the bone-implant interface. This type of failure is able to be bypassed by providing the implant macrodesign with threads, which convert shear force into compressive force that the interface is more resistant to. Dental clinicians and researchers should consider both the implant macrostructure and microstructure to better understand clinical bone response to the dental implant, although this topic is based on the surface microstructural modification.

The computer numerical controlled milling of cp-Ti manufactures screw-shaped endosseous dental implants. The surface machined by this milling procedure, which is now called a turned Ti surface, shows many parallel grooves in scanning electron microscopy (SEM). The turned surface experiences no modification process, which has frequently served as a control to evaluate the biocompatibility of modified surfaces. When an implant is inserted into the bone and the implant surface becomes juxtaposed to the bone, bone healing (or osseointegration) on the surface is known to be fulfilled by two mechanisms: distance and contact osteogenesis[1][2]. In distance osteogenesis, new bone starts to be formed on the surfaces of bone. The direction of bone growth is from the bone towards the implant surface (Figure 1A). In contact osteogenesis, or de novo bone formation, new bone formation begins on the implant surface. The direction of bone growth is from the implant towards the bone, opposite to that for distance osteogenesis (Figure 1B). When an endosseous implant with a turned surface is placed into the jawbone, only distance osteogenesis occurs, which implies that more time is needed for sufficient osseointegration to withstand masticatory forces[1][3]. The necessity of reduction in the patient’s edentulous period has led the modification of an implant surface to accelerate bone healing.

The traditional approach to the surface modification of a Ti implant has been roughening at the micro-level. One of the most successful surfaces in clinical dentistry is the sandblasted, large-grit, and acid-etched (or SLA) surface. An SLA Ti surface is made by sandblasting the turned Ti surface with large-grit particles, the sizes of which range from 250 μm to 500 μm in general, and by acid-etching the blasted surface. The acids for etching are usually strong acids including hydrochloric, sulfuric, and nitric acids. SEM shows topographically changed irregularities on the SLA surface, with large dips, small micropits, sharp edges, and pointed tips. Sa, one of the surface parameters defined as the arithmetic mean height of the surface, is approximately 1.5 μm to 2 μm. Osteogenic cells migrate to the roughened Ti surface through the fibrin clot that is formed at the peri-implant site after bone drilling for implant insertion, and these cells appear to recognize the irregularities of the SLA surface as lacunae to be filled with bone materials[1][4]. Contact osteogenesis occurs as the osteogenic cells secrete a bone matrix. The occurrence of both contact and distance osteogenesis accelerates the osseointegration on the SLA surface compared to the turned surface.

The Ti surface of a dental implant is originally hydrophobic[5]. Water (H2O) is considered to have initial contact with the implant surface when the implant is inserted into the bone[6]. Therefore, there have been attempts to add hydrophilicity to an SLA surface, since hydrophilicity is expected to help accelerate the bone healing process[5][7]. A dental implant with a hydrophilic SLA surface, commercially called SLActive (Institute Straumann AG, Basel, Switzerland), is made with a water rinse of the original SLA implant in a nitrogen chamber and a packaging technique of storing the implant in an isotonic sodium chloride solution with no atmospheric contact, and this hydrophilic implant is being clinically used in the global market[8].

Regardless of whether an SLA surface is hydrophobic or hydrophilic, this dental implant surface has shown excellent long-term clinical results[9][10][11][12][13]. A previous 10-year retrospective study investigating more than 500 SLA Ti implants concluded that both the survival and success rates were 97% or higher[9]. The 10-year survival rate of SLA Ti implants was reported to be higher than 95%, even in periodontally compromised patients, although strict periodontal interventions were applied to these patients[11]. Similar results were found in 10-year prospective studies investigating the survival rates of dental implants with SLA surfaces[10][12][13]. This modified surface, roughened at the micro-scale, is one of the dental implant surfaces that has been most frequently tested in clinics for the longest period. 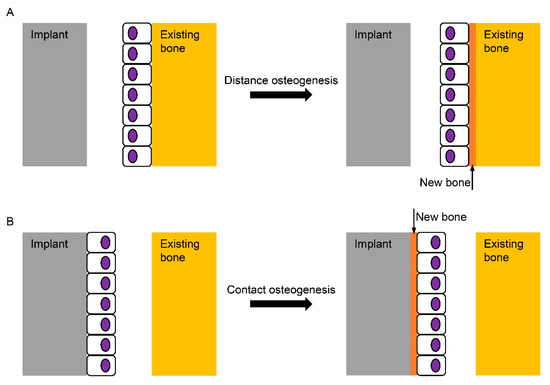 Figure 1. Schematic diagram for the healing mechanisms of the bone surrounding an implant. (A) In distance osteogenesis, the direction of bone formation is from the existing bone to the implant; (B) in contact osteogenesis, however, the direction is opposite, from the implant to the existing bone, which is known not to occur on the turned Ti (Titanium) surface without any modification.

The genuine biocompatible surface on the Ti dental implant is Ti oxide (TiO2), not Ti itself, which is spontaneously formed when the Ti surface is exposed to the atmosphere. However, this Ti oxide layer is very thin (a few nm in thickness) and is imperfect with defects[14]. Also, chemically unstable Ti3+ and Ti2+ are known to exist in the oxide layer[15]. Therefore, there have been several techniques developed to thicken and stabilize the Ti oxide layer, which is considered to increase the biocompatibility of the surface[16][17][18]. When Ti becomes the anode under an electric potential in an electrochemical cell, Ti is oxidized to be Ti4+, and the TiO2 layer is able to be thickened and roughened[6]. Topographically, the oxidized Ti surface for a dental implant has many volcano-like micropores with various sizes, which are observed in SEM. The surface characteristics of the anodized Ti surface depend on the applied potential, surface treatment time, concentrations, and types of electrolytes[6][18]. The arithmetic mean height of this surface, or Sa, is evaluated to be approximately 1 to 1.5 μm for dental use[19][20][21][22].

Osteogenic cells appear to recognize the topography of a dental implant surface although we do not yet know which surface topography is more proper in bone healing, or if the irregularities of the SLA surface are more effective for the osteogenic cell response than the microporous structure of the anodized surface[23]. To date, no in vivo model has found any significant differences in bone responses to the microtopographies of Ti dental implant surfaces[24][25]. What is definitely known about implant surface topography is that the cp-Ti surfaces topographically modified at the microscale accelerate osseointegration more than the turned surface, and these modified surfaces show superior results to the turned surface during in vitro, in vivo, and clinical studies.

The anodically oxidized Ti surface has shown superior results to the turned surface in various in vitro tests and in vivo histomorphometry[22][25][26][27]. A previous meta-analytic study reported lower failure rates of the oxidized Ti implants than those of the turned implants from the included 38 clinical investigations[28]. A prior retrospective and a 10-year prospective study concluded that that success rates were higher than 95% for the TiUnite surface (Brånemark System, Nobel Biocare, Göteborg, Sweden), which is a trade name for the oxidized Ti surface[29][30]. However, a recent 20-year randomized controlled clinical trial notably reported a similar marginal bone loss between micro-roughened and turned Ti implants[31]. This clinical study used an identical implant design with an implant-abutment connection structure and internal friction connection[32]. Identifying which of the two factors (surface characteristics and implant design) is a major contributor to the long-term clinical success of dental implants needs to be thoroughly investigated, although higher success or survival rates have been steadily published for Ti dental implants with modified surfaces at the micro-scale, compared to the turned implant[10][33][34].