The Metabolism of Islands

Islands are hotspots of biocultural diversity, and home to 600 million people that depend on one-sixth of the earth’s total area, including the surrounding oceans, for their subsistence. Today, they are on the frontlines of climate change and face
an existential crisis. Islands are, however, potential “hubs of innovation” and are uniquely positioned to be leaders in sustainability and climate action. In this entry, we introduce key concepts of socio-metabolic research (SMR) and its relevance to island sustainability. SMR suggests that islands can build system resilience by reconfiguring resource-use patterns, and achieve a high quality of life at the lowest environmental costs.

On 23 September 2017, five days after Hurricane Maria ravaged the small island nation of Dominica, Prime Minister Roosevelt Skerrit boldly announced to the 72nd UN General Assembly his goal of rebuilding the country as the world’s first climate-resilient nation. Only six months later, with financial support from Canada and the U.K., the Climate Resilience Execution Agency for Dominica (CREAD) was launched. By the end of 2018, Dominica had passed its Climate Resilience Act [1]. Dominica’s urgency for a sustainability transformation and to build resilience to the impacts of climate change is a concern increasingly shared by most small island states and island communities around the world.

According to Island Conservation, there are ~465,000 islands in the world [2], of which some 80,000 are inhabited by approximately 600 million people or 8.5% of the global population [3]. Islands comprise 5.3% of the earth’s terrestrial area, and if we include the surrounding oceans, this amounts to one-sixth of the earth’s total area on which island communities depend [4]. Thus, islands are home to rich and rare biodiverse systems. Harboring 20% of all plant, bird, and reptile species found globally, islands are biodiversity hotspots; 7 out of 10 coral reef concentrations, and 12 of 18 centers of marine endemism surround islands. Islands are, therefore, conservation frontiers, with a third of the world’s conservation areas being on islands [5][6].

In addition to thriving biodiversity, islands have for millennia been at the crossroads of human culture–nature interactions, that have forged new forms of social expression. As a result, diverse island cultures have evolved [7][8]. They have developed from the days of the wind-propelled long and arduous journeys where ships anchored at islands to replenish supplies or to enter into a trade, to the times of colonial and slave trade, to more recent times where a significant portion of island populations are living and working abroad. Given such dynamic histories, regions such as the Caribbean, Oceania, and the Pacific, are referred to as the microcosms of the Earth, with multiple ethnicities, languages, and ideologies [9].

Today, islands are severely threatened and are on the frontlines of climate change. With less than 1% of greenhouse emissions, island communities contribute the least to climate change; yet they remain the most impacted [10][11][12]. They have become sites of compound events and multiple risks. With fragile economies and ecosystems, the ability for small island economies to withstand the shocks caused by climate-induced extreme weather events is limited, and losses tend to be disproportionate, relative to the size of the island economy. The 2017 hurricane season, for example, resulted in severe losses relative to GDP in Sint Maarten (797%), the British Virgin Islands (309%), and Dominica (259%) [13], with the economic costs of recurring disasters only increasing over time [14][15][16][17]. Even in the much less exposed Mediterranean Sea, an extreme weather event of so far unknown intensity in 2017 washed away part of the central medieval town on the small island of Samothraki [18].

In an era of climate urgency, islands will need to undergo a transformation to sustainability, where all citizens can enjoy a high quality of life at the lowest environmental cost. This will require a fundamental shift in the way small islands respond to problems and the way they conceive island development. Policy responses to challenges such as extreme weather events, resource insufficiency, international debt, brain drain, and waste are inevitably tackled independently, and on a narrow time-frame [19]. Links amongst these problems are often poorly understood, and the solution to one is frequently at the expense of another. To monitor progress towards sustainability and guide the development of innovative solutions, systemic approaches need to be adopted [20][21].

2. Towards a Metabolism of Islands: Clarifying Core Concepts

“Metabolism” is a biological concept that refers to the chemical conversion and breakdown of organic matter to sustain reproduction. Analogous to biological metabolism, any given society organizes material and energy flows through their natural environment (or through imports with other societies) for their sustenance and reproduction. Some materials and energy become waste (outflows), while the rest of the flows are net additions to “material stocks” (or built environment). This process of organizing and reproducing material stocks and flows by society is referred to as "social metabolism" [22] (Figure 1). 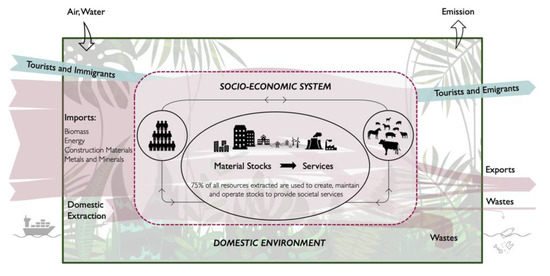 Figure 1. Specific combinations of material stocks and flows contribute to the system’s exposure to risk (metabolic risk) and its ability to provide essential services.

Material stocks (or simply “stocks”) provide critical societal services such as housing, food, energy, transport, health, and education. As economies develop, they stimulate the demand for essential services that are provided by the stocks, and hence, they are viewed as the material basis of societal well-being. The larger the stocks, the greater the flows required to maintain and reproduce these stocks, creating a feedback loop, referred to as the material stock-flow–service (SFS) nexus [23]. The quantity and composition of resource throughput in a socioeconomic system characterize its metabolic profile and is indicative of the pressure an economy exerts on the environment.

Just as metabolism influences a person’s body, the process of social metabolism influences the natural environment by altering land-and-sea-use (by mining, urbanization, fishing, and agriculture) and, over time, causes pressure on ecosystems, the atmosphere, and bio-geo-chemical cycles [24]. Climate disruptions, sea-level rise, hurricanes, and possibly even pandemics are examples of ecosystem dis-services, against which society needs to adapt and protect itself by altering existing patterns of social metabolism.

As such, specific combinations of material stocks and flows can become a metabolic trap and contribute to the system’s exposure to risk, which we refer to as the (socio-)metabolic risk [25]. The IPCC [26] defines risk as “the potential for adverse consequence”, that results from the “interaction of vulnerability (of the affected system), its exposure over time (to the hazard), as well as the (climate-related) hazard and the likelihood of its occurrence” (p. 557). Maladaptive practices such as reliance on imports for basic needs, centralized energy systems, coastal squeeze, or population drift can increase metabolic risks on islands. Systems that exhibit high metabolic risks are inherently vulnerable to shocks and disruptions and to impacts of climate change.

A (socio-)metabolic collapse is an adverse outcome for systems that embody high metabolic risk, where the system’s ability to organize its social metabolism is severely compromised. It signals the crossing of a threshold or tipping point that is often irreversible. Reaching a tipping point can be due to a biophysical (e.g., overuse of natural resources causing an ecological disaster), or social phenomenon (out-migration due to lack of services or jobs on an island causing a demographic shift), or a combination of both [27]. In the case of small islands, a metabolic collapse can be rapid, such as disruptions from hurricanes, or slow from the gradual depletion of resources, or sea-level rise. Reconstruction following an adverse event, such as a hurricane, comes with large fiscal and environmental costs and can increase the metabolic risk if rebuilding actions are maladaptive.

Islands are systems with clearly delineated boundaries and are, therefore, excellent geographies for socio-metabolic
research (SMR). SMR is a research tradition within Industrial Ecology (IE) for systematically studying the biophysical stocks
and flows of material and energy associated with societal production and consumption. SMR offers crucial insights to develop strategies to reconfigure and reduce societies’ use of natural resources that are compatible with ecological boundaries, while also providing essential services to reach social thresholds [28]. Restructuring patterns of resource use, both for stocks and flows, will allow island economies to build resilience and adapt to the challenges of climate change. Island industrial ecology and socio-metabolic research can certainly play an important role in helping islands achieve that status.

Thirty-five authors conducted socio-metabolic research (SMR) on islands that are published in a special issue of Sustainability. The nine contributions in this special issue cover a wide range of application of SMR, from flow accounts, to stock analysis, and their relationship to services in space and time. They can be accessed here: https://www.mdpi.com/journal/sustainability/special_issues/metabolism_islands