New (or novel) psychoactive substances (NPS) or “designer drugs”, substances that are not controlled by the 1961 Single Convention on Narcotic Drugs or the 1971 Convention on Psychotropic Substances, pose public health threats. NPS are widely available on the web, through local head shops, on streets and in schools. Many chemical and nucleic acid based methods can be used to detect and identify these substances.

New (or novel) psychoactive substances (NPS) or “designer drugs” are substances that are not controlled by the 1961 Single Convention on Narcotic Drugs or the 1971 Convention on Psychotropic Substances that pose public health threats.[1] In the United States, NPS are legal highs that have not been scheduled under the United States’ Drug Enforcement Agency (DEA) Controlled Substances Act (CSA). The term "new" or "novel" does not necessarily refer to new molecules but to substances that have recently become available, found on the illicit market, or abused as legal, recreational drugs and can include plant-based drugs and their extracts. The molecules may have not been suitable as pharmaceuticals or may be previously patented molecules that are now off patent. The term can also describe new derivatives or molecules related to illicit drugs designed to mimic controlled substances and evade prosecution under the CSA. NPS are used for their euphoric, stimulant, and hallucinogenic effects as well as their analgesic and sedative effects.[2] NPS have been widely reported to find use as party, nightclub, and rave drugs and are especially dangerous when used in combination with other substances.[2]

NPS are widely available online, through local head shops, on streets and in schools and are often marketed to young people.[2] Parolees and probationers known to use NPS as drug screens are unlikely to detect their NPS use.[2] NPS are discussed on the internet in drug fora, the dark web, and in YouTube videos. They have been marketed as incense, plant food, and bath salts and labelled “not for human consumption”.[3][4] NPS are consumed by vaping, inhalation, smoking, ingestion in foods and teas, and in pill form.[2][4]

NPS seizures have been increasing since 2009[5] and self-reported use increased from 2009-2013[6] but NPS are still likely to evade detection and seizure by law enforcement. From 2009-2016, 739 NPS were reported to the United Nations Office of Drugs and Crime (UNODC) by 106 countries and territories.[5] Some molecules emerge and recede quickly while others find use by a small or larger number of people. Tetrahydrocannabinol (THC) produced by the Cannabis sativa plant and mitragynine produced by the Kratom plant Mitragyna speciosa are examples of plant-based drugs that can be abused. According to the 2018 National Drug Threat Assessment published by the DEA, China is the primary source for synthetic cannabinoids and synthetic cathinones that are detected in the United States although the substances continue to change every year.[2] There are tens of thousands of NPS reports in the United States.[2] NPS can also be opioids, hallucinogens, benzodiazepines, tryptamines, and piperazines.[2] For example, synthetic cannabinoids have often been detected on non-drug plant material but are also sold in oil form and used in e-cigarettes or vape pens and are marketed as a “safe” and legal alternative to other drugs.[2][3]

NPS pose problems for law enforcement as they may not be controlled substances but many NPS have caused fatalities due to their often higher potency as compared to the related controlled substances or drug interactions.[7] NPS can be detected and identified using color tests, thin layer chromatography (TLC), infrared spectroscopy (IR), Raman spectroscopy, mass spectrometry (MS), gas chromatography-mass spectroscopy (GC-MS), liquid chromatography-mass spectrometry (LC-MS), direct analysis in real time-mass spectrometry (DART-MS), nuclear magnetic resonance spectroscopy (NMR) and nucleic acid-based methods.[3][7][8][9][10][11][12][13][14][15][16] Some challenges follow. On-site colorimetric methods are not available for all NPS. Labs may not have reference standards or validated methods for GC-MS or LC-MS detection and identification. Total structure determination of a newly observed NPS requires the use of several spectroscopic methods including IR, MS and NMR. Owing to the newness of the NPS, reference standards are often not available for purchase which is causing a shift in forensic science practice toward the need for structure determination.[17] The UNODC Scientific and Forensic programme and the Scientific Working Group for the Analysis of Seized Drugs (SWGDRUG) have supported the community with analysis methods and chemical data in drug monographs and searchable mass spectral and infrared libraries.[18][19] The National Institute of Standards and Technology (NIST) has created the NPS DataHub for use by forensic chemists interested in sharing NPS data.[20] In addition to creating challenges for the labs, NPS-induced illness is taxing hospitals (DEA). Doctors and clinical labs need to determine the identity of the substances for treatment and toxicologists are tasked with determining the identity of the substances found in the deceased’s tissues. In an unexpected turn of events, NPS have bridged the interests of clinical and forensic toxicology in recent years.[21]

Nucleic acid-based methods including several polymerase chain reaction-based methods, have been employed to detect and identify plants and mushrooms producing NPS of natural origin such as the Kratom shown in Figure 1.[3][7][8][9][12][15][22] The methods include end point PCR followed by gel electrophoresis, PCR followed by capillary electrophoresis (CE) for fragment sizing including DNA sequencing, and PCR followed by high resolution melt analysis (HRM). Cannabis sativa (marijuana) and Salvia divinorum (“Diviner’s Sage”) have been detected and identified using polymerase chain reaction (PCR)-based approaches followed by gel or capillary electrophoresis.[8][9] Over twenty plants were identified by DNA sequencing in a study of 62 Spice-like blended herbal products from the Japanese market which contained mostly synthetic cannabinoid NPS.[3] Using the Basic Local Alignment Search Tool (BLAST), the sequences were aligned with the plant DNA in the database and identified each.[3] The plants identified included the potent psychotropics marijuana, Diviner's Sage, and Kratom (Mitragyna speciosa).[3] The NPS were confirmed using GC-MS and LC-MS.[3] PCR HRM has been used to detect and identify several other NPS-producing plants including Artemisia absinthium (wormwood), Datura stramonium (Jimson weed), Ipomoea purpurea (morning glory), Kratom (Mitragyna speciosa), Merremia tuberosa (Hawaiian woodrose), and Papaver somniferum (Opium poppy) as well as marijuana, which has been legalized for medical and recreational use by numerous U.S. states although it remains a Schedule I substance by the DEA CSA at this writing.[7][12][15][23] Lysergic acid amide (LSA) is produced by Hawaiian woodrose and D-lysergic acid amide is produced by morning glory.[12] Atropine, hyoscamine, scopolamine are produced by Jimson weed and thujone is produced by wormwood.[15] Kratom produces mitragynine and other alkaloids.[7] Using primers that specifically target unique genes or DNA regions in the different species, PCR amplified DNA is detected by each amplicon’s different melt temperature.[24] Duplex PCR HRM assays can detect and identify Kratom and marijuana[7] and magic mushrooms and marijuana[22] and a triplex assay can detect and identify Jimson weed, wormwood and marijuana.[15] [15] A tetraplex PCR HRM assay can detect and identify morning glory, jimson weed, Hawaiian woodrose, marijuana with an internal positive control.[12] Current research is also focusing on the use of cannabidiol (CBD) produced in marijuana to treat sleep and epilepsy disorders among others.[25] 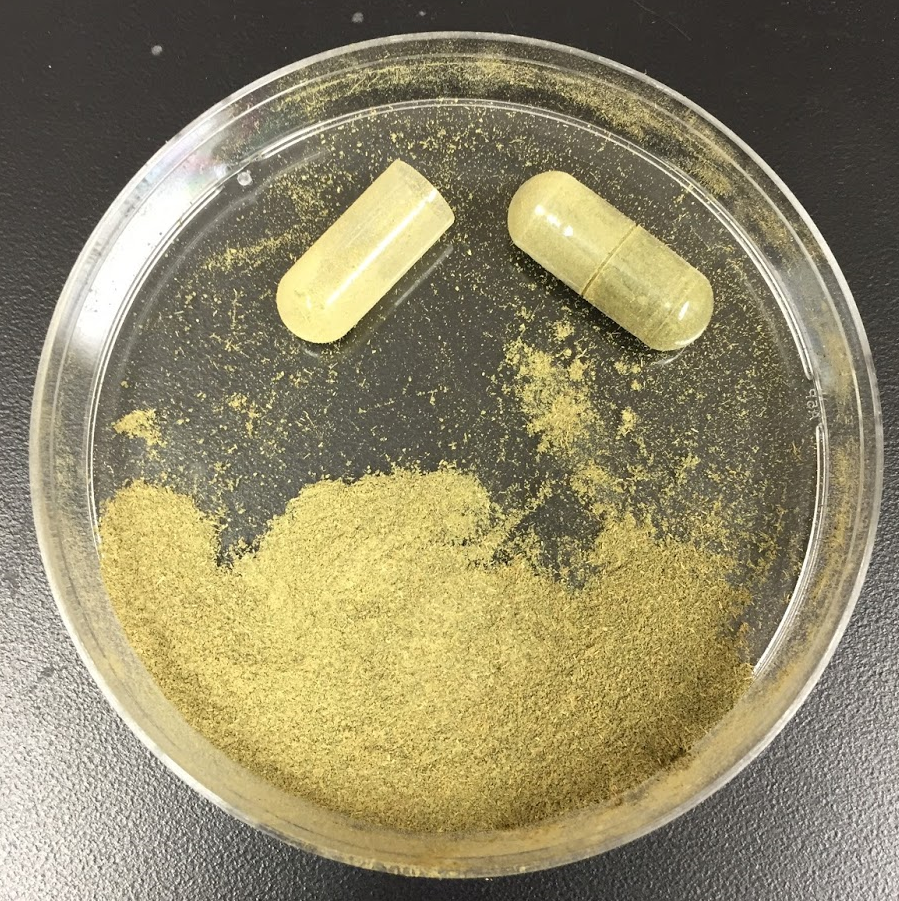