With the aim to improve the strength of high-temperature shape memory alloys, multi-component alloys, including medium- and high-entropy alloys, have been investigated and proposed as new structural materials. Notably, it was discovered that the martensitic transformation temperature could be controlled through a combination of the constituent elements and alloys with high austenite finish temperatures above 500 °C. The irrecoverable strain decreased in the multi-component alloys compared with the ternary alloys. The repeated thermal cyclic test was effective toward obtaining perfect strain recoveries in multi-component alloys, which could be good candidates for high-temperature shape memory alloys.

Shape recovery in shape memory alloys (SMAs) occurs during a reverse martensitic transformation from martensite to austenite phases. Thereafter, the SMA operating temperature is related to the martensitic transformation temperature (MTT). High-temperature shape memory alloys (HT-SMAs) are defined as SMAs that can recover their shapes at temperatures above 100 °C. Several applications of HT-SMAs have been proposed. For example, Ni30Pt20Ti50, whose MTTs include austenite start temperature, As: 262 °C; austenite finish temperature, Af: 275 °C; martensite start temperature, Ms: 265 °C; and martensite finish temperature, Mf: 240 °C, was applied for active clearance control actuation in the high-pressure turbine section of a turbofan engine [1]. This indicates that the design can offer a small and lightweight package without requiring motion amplifiers that cause efficiency losses and introduce an additional failure mode[1]. Another example is the helical actuators for surge-control applications in helicopter engine compressors[2]. In this application, Ni19.5Ti50.5Pd25Pt5, whose MTTs comprise As: 243 °C, Af: 259 °C, Ms: 247 °C, and Mf: 228 °C, was applied because the alloy exhibited good work capabilities, a 2.5% recoverable strain, and a work output of 9.45 J/cm3 at 400 MPa[2] . Several SMA applications, such as the active jet engine chevron, springs and wires for a general class of high-temperature actuators, oxygen mask deployment latch, SMA-activated thermal switch for lunar surface applications, variable geometry chevrons, and gas turbine variable area nozzles, have also been proposed [3]. Here, HT-SMAs, Ni19.5Ti50.5Pd25Pt5 or Ni50.3Ti29.7Hf20 are used only in springs and wires for a general class of high-temperature actuator. Furthermore, NiTi-based SMAs that can actuate in the temperature range of 70–90 °C are used in other applications.

Another approach to increasing MTTs is using other alloys with MTTs higher than those of NiTi alloys. Therefore, TiPd, TiAu, and TiPt have been studied because they exhibit a martensitic transformation from a B2 to a B19 structure, and their MTT values are higher than 500 °C[25][26]. For example, typical martensitic twin structures were observed in TiPt, whose high potential as an HT-SMA has been established[27][28]. The first investigation on strain recovery at high temperatures was performed for TiPd[29]. A binary TiPd sample was deformed at 500 °C, and the change in its length after it was heated above the Af was investigated to measure strain recovery[29]. However, only a 10% strain was recovered owing to plastic deformation at 500 °C[29]. ​​The effect of an ​alloying element on MTTs, strain recovery, as well as strength of the martensite and austenite phases in TiPd and TiPt alloys, have been investigated by my group [33-50] and are reviewed herein. In addition to the TiPd and TiPt alloys, high- and medium-entropy SMAs (HEAs or MEAs) are also appraised because HEAs and MEAs have been attracting considerable attention as new SMAs. Notably, HEAs and MEAs are multi-component equiatomic or near-equiatomic alloys, which have garnered much interest as new generation structural materials because their high-entropy effects, such as severe lattice distortion and sluggish diffusion, are expected to improve the high-temperature strength of alloys [51, 52]. As already shown, it is difficult to achieve perfect strain recovery in HT-SMAs because of the easy introduction of plastic deformation at high temperatures. Furthermore, improvement of strength of SMAs is a key issue for HT-SMAs. Application of HEAs and MEAs to HT-SMAs is expected in this area for whith results on multi-component alloys, in particularly MEAs and HEAs, are presented in this paper. 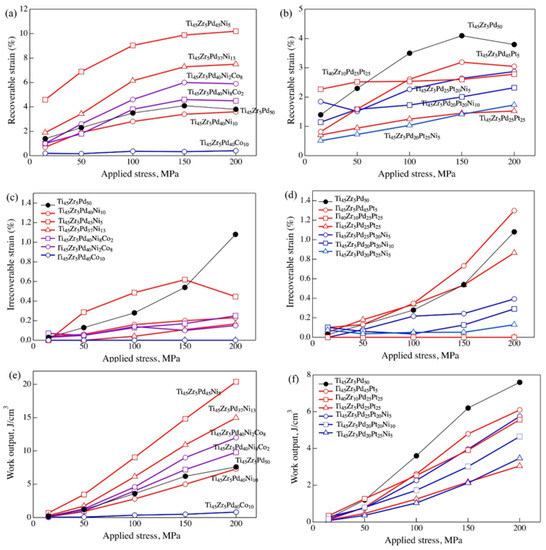 Training was performed for Ti45Zr5Pd20Pt25Ni5 and Ti45Zr5Pd20Pt20Ni10 [34], and perfect recovery was achieved during the thermal cyclic test for approximately 100 cycles under loads of 200, 300, and 400 MPa, whereby the final work outputs were approximately 3.5, 3, and 2 J/cm3, respectively, for Ti45Zr5Pd20Pt25Ni5. For Ti45Zr5Pd20Pt20Ni10, final work outputs of 3 and 1.5 J/cm3 under loads of 200 and 300 MPa were obtained, respectively. The small work output for the large applied stress represents a drastic decrease in the transformation strain. It is necessary to keep the transformation strain of the multi-component alloys during the thermal cyclic test. The thermal cyclic test is considered as a kind of thermal fatigue test and the stable cyclic strain recovery with the constant transformation strain indicates the thermal fatigue life of SMAs and stability as SMA actuators.

Table 1. Strength of the martensite and austenite phases of the multi-element alloys.