Leaky gut syndrome- is a medical condition characterized by increased intestinal permeability which may cause chronic inflammation and contributes to pathogenesis of wide range of diseases. According to the hypothesis of leaky gut syndrome, increased intestinal permeability enables antigens to cross intestinal barrier and absorb into the bloodstream consequently trigger the immune system and cause systemic reactions. Although LGS is very popular in alternative medicine circles, there is still little evidence to support hypothesis that it is a direct cause of any widespread problems.

Variation in the structure of the intestinal barrier due to inflammation, chronic diseases or poor nutrition might lead to impairment of intestinal permeability [1]. According to the LGS hypothesis, intestinal hyperpermeability may enable noxious microorganisms, their toxins and antigens to “leak” into the bloodstream and consequently trigger systemic reactions [2]. Until recently, the LGS was associated with alternative medicine circles however novel evidence indicate its connection between both GI and non-GI diseases. These include celiac disease [3], IBD [4], irritable bowel syndrome (IBS) [5], type 1 [6][7] and 2 diabetes [8], Parkinson disease [9], autism [10] and allergies [11].

There are two different pathways of transepithelial transport which if disintegrated may contribute to the pathogenesis of the LGS: paracellular (in between the adjacent cells via dynamic opening and closing of intercellular junctions) and transcellular (through the endothelial cells via endocytosis). Paracellular permeation of molecules is mainly controlled by TJs, which (by forming small pores) regulate the influx of ions and other small molecules (molecular weight <600 Da) through the intestinal wall [12]. Cytokines, intestinal bacteria, or dietary antigens can affect TJs conformation thereby alter intestinal permeability [13]. For instance, interferon γ (INF-γ), released after contact with viruses or certain bacteria, increases intestinal permeability by redistribution of TJ proteins and the rearrangement of the actin cytoskeleton. Tumor necrosis factor α (TNF-α) also influences intestinal permeability via inducing apoptosis of endothelial cells [14]. In addition, interleukin 6 (IL-6) is evidenced to enhanced intestinal permeability by stimulating the expression of CLDN-2 which plays a crucial role in forming TJ pores [15]. Disintegration of transepithelial transport pathways may induce further translocations of noxious factors and as a result of the vicious circle, contribute to progression of many intestinal diseases such as IBD or be one of the pathogenic factors [1].

The first human protein displaying regulatory activity on intestinal TJs, called zonulin, was identified in 2000 [16]. Presumably, zonulin activates epidermal growth factor receptor (EGFR) through proteinase activated receptor 2 (PAR2) which leads to phosphorylation of TJ proteins and rearrangement of actin filaments and the subsequent displacement of proteins from the junctional complex. As a result, TJ become looser, enhancing intestinal permeability [17]. It is assumed that zonulin contributes to bacteria–host interaction, as increased secretion of this protein was detected in case of exposure to either pathogenic or nonpathogenic strains [18]. Disruptions of intestinal zonulin concentration was observed in patients with celiac disease and IBS indicating its role in the pathogenesis or progression of these diseases [19][20].

There are plenty of environmental factors capable of changing intestinal barrier permeability: physical and psychological stress [21], obesity, alcohol [22], antibiotics and nonsteroidal anti-inflammatory drugs (NSAIDs), food allergens and nutrients itself [23]. It is well known that dietary components may significantly alter GI functions and specifically modulate intestinal barrier integrity. The influence of dietary habits on intestinal physiology is clearly visible in differences in incidence rates of intestinal diseases between industrial and developing countries. Diseases which are linked to intestinal hyperpermeability tend to localize to Westernized countries, where a diet rich in fats and refined carbohydrates predominates [24]. Moreover, several in vivo studies support the connection between a high-fat diet (HFD) and disturbance in the physiology of the GI tract. For instance, Cheng et al.[25] evidenced that HFD exacerbates experimental colitis in a mouse model of IBD. Additionally, a Western-style diet alters intestinal microbiota composition and reduces the concentration of beneficial commensal bacteria including Bifidobacterium spp. and Bacterioides spp. which contribute to preserving intestinal barrier integrity [26].

2. Dietary Carbohydrates and Lipids in the Pathogenesis of Leaky Gut Syndrome

2.1 The influence of Dietary Carbohydrates on the Intestinal Barrier

cCarbohydrates are classified as one of the three principal classes of macronutrients. They are primarily found in natural food sources, such as cereal products, dry seeds of legumes, fruit, and vegetables. Additional sources of carbohydrates include sugary drinks, sweets, and commercial prebiotics. Depending on the number of sugar units in the chemical structure, they are classified into sugars (mono- and di-saccharides), oligo-, and poly-saccharides [27].

Saccharides are the main source of energy for both intestinal eukaryotic cells and gut microbiota. The metabolome analysis showed that microbial cells express an enriched spectrum of glycoside hydrolases. As a result, they may also acquire energy from carbohydrates, which are indigestible in humans [28]. These saccharides are fermented into short chain fatty acids (SCFAs), which have a positive impact on the function of intestinal cells [29].

According to many studies, dietary carbohydrates may affect intestinal barrier function. A natural monosaccharide found in fruits, fructose, increases intestinal permeability if consumed in high doses. This effect may be explained by the fructose-induced dysfunction of TJ proteins [30][31]. On the other hand, numerous complex carbohydrates maintain proper intestinal function. Lactulose, arabinose, inulin-type fructans, fructo-oligosaccharides (FOS) and galacto-oligosaccharides (GOS) support the growth of beneficial bacteria and protect against dysbiosis [32][33] What is more, GOS are also suggested to protect intestinal barrier independently from microflora composition [34][35].

Long chain fatty acids (LCFAs), which are consumed in the diet may induce biological responses and affect intestinal permeability. The n-3 and n-6 polyunsaturated fatty acids (PUFAs) are involved in many physiological processes, such as immunological reactions as well as the pathophysiology of several disorders, e.g., LGS and IBD [36][37]. The influence of PUFAs on TJ permeability of the gut has also been reported. However, there are some contradictory points. Howie et al. [38] discovered that decosahexaenoic acid (DHA, C22:6 n-3) protects the small intestine of mice from the increased permeability induced by methotrexate. On the contrary, there is evidence that a water-in-oil-in-water emulsions incorporating C18 unsaturated fatty acids or DHA were valuable carriers for improving the colonic absorption of poorly absorbable drugs, suggesting increased intestinal absorption. Nevertheless, TEER was not changed by the incorporation of various fatty acids in emulsions indicating that this effect was not related to an increase in gut permeability [39].

In humans, in a cross-sectional study, Mokkala et al. [42] investigated whether gut microbiota and diet affect serum zonulin concentration in 100 overweight Finnish women in early pregnancy. They found that the richness and composition of the gut microbiota as well as the intake of n–3 PUFAs, fiber, and a range of vitamins and minerals were associated with low serum zonulin concentration. Furthermore, Genser et al. [43] demonstrated, using immunofluorescence, TJ damage in the jejunal epithelium of obese patients indicated by a reduction of occludin and tricellulin. Moreover, they investigated whether the barrier impairment could be exacerbated by dietary lipids. The jejunal permeability after the lipid load was two-fold higher in obese patients as compared to non-obese controls; this suggests that intestinal barrier defects occur in obesity and may be indirectly associated with lipid consumption.

Modification of diet, especially in terms of carbohydrates and lipids composition, may beneficially affect intestinal permeability, leading to an improvement of LGS. It is worth mentioning that there are several studies showing that fructose is one of the key carbohydrates involved in regulation of the intestinal permeability and causes mainly harmful effects. On the other hand, free fatty acids seem to have a beneficial effect on gut permeability, for instance SCFAs, mainly butyrate at appropriate concentrations may lead to the reduction of intestinal permeability, which is beneficial in LGS. In contrast, LCFAs, including n-3 and n-6 PUFAs have unclear properties. Some of those behave as components untightening and tightening intestinal membrane. These evidences suggest that modification of a diet can be an adjunct to convectional, pharmacological therapy for patients with LGS and other disorders characterized by leaky gut. A potential beneficial diet would be based on avoidance of food products, such as fruits abundant in fructose as well as oils containing ALA and GLA. On the other hand, patients with LGS should consume a larger amount of dietary fiber (Figure 1). 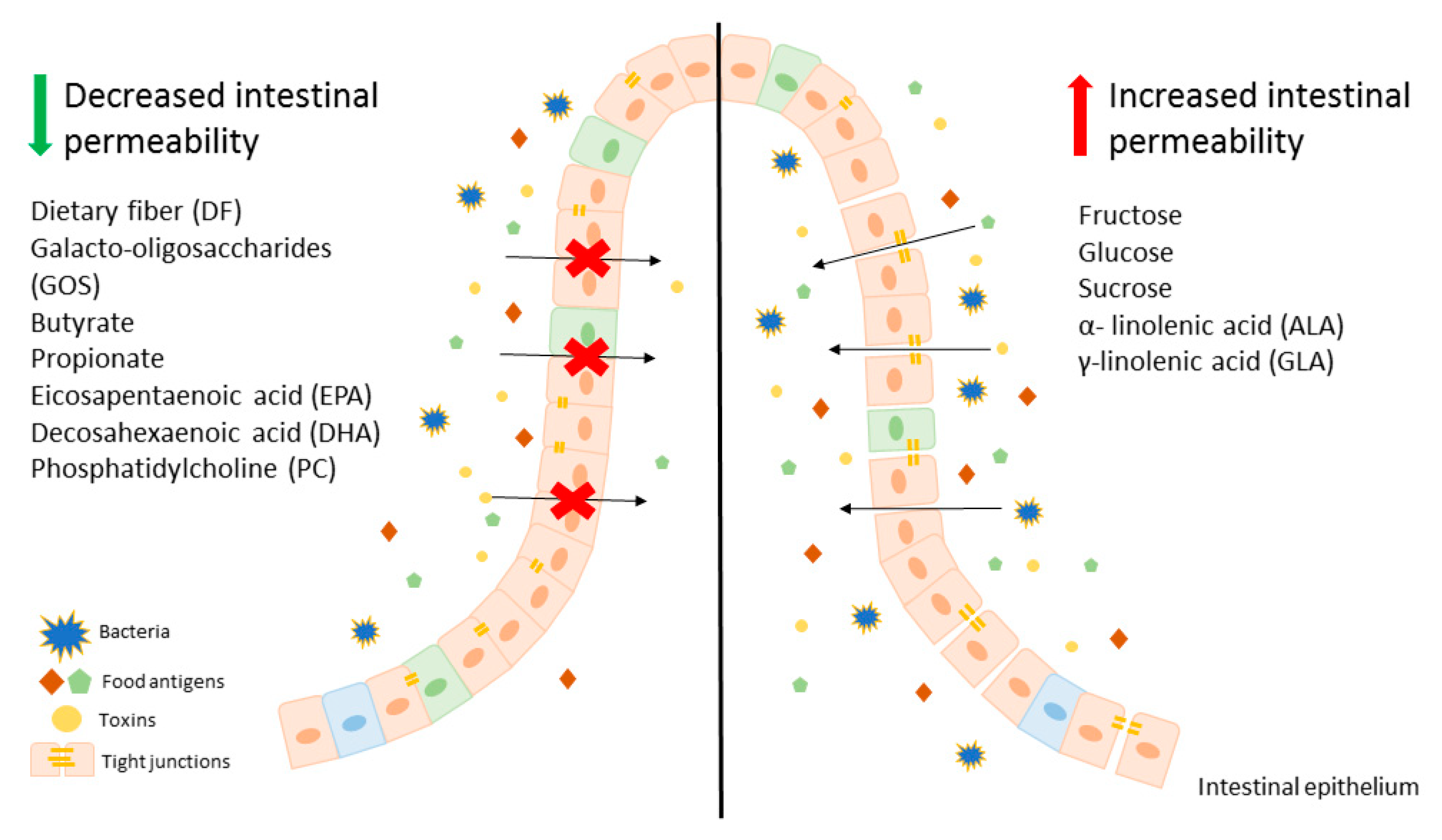 Figure 1. An overview on the effect of various components of diet on intestinal epithelium permeability.

To conclude, the development of novel therapeutic approaches for patients with LGS and other disorders with accompanying impairment of the gut–blood barrier aims to design personalized nutrition therapy to decrease carbohydrate- or lipid-induced intestinal leakage. However, there are still many questions about LGS and dietary components, therefore further research is needed.