Metformin, the most widely prescribed drug therapy for type 2 diabetes, has pleiotropic benefits, in addition to its capacity to lower elevated blood glucose levels, including mitigation of cardiovascular risk. The mechanisms underlying the latter remain unclear. Mechanistic studies have, hitherto, focused on the direct effects of metformin on the heart and vasculature. However, emerging evidence is indicative of a major role of the gut in mediating the cardiovascular actions of metformin.

Type 2 diabetes (T2D) is a key global health issue with rising prevalence [1]. T2D is associated with a two-to-three-fold risk of cardiovascular disease, which represents the most common cause of death. Anti-diabetic treatment focuses on glucose-lowering which, when effective, markedly diminishes the risk of both development and progression of microvascular complications (i.e., neuropathy, retinopathy, nephropathy). However, improvements in glycemic control only have modest effects on macrovascular outcomes, with only a subset of anti-hyperglycemic agents being associated with a beneficial effect on cardiovascular outcomes in T2D, including sodium glucose linked transporter-2 (SGLT-2) inhibitors and glucagon-like peptide-1 (GLP-1) receptor agonists, along with metformin [2].

Metformin is one of the oldest anti-diabetic drugs and remains the first-line pharmacological therapy for T2D in most international guidelines [3]. Its pleiotropic effects, in addition to glucose-lowering, include anti-obesity, anti-cancer, anti-ageing and cardiovascular benefits. The latter, demonstrated initially in the UKPDS trial, is of increasing interest. In the UKPDS trial, metformin use was associated with a moderate reduction in the incidence of various cardiovascular end-points and all-cause mortality, relative to both diet-only therapy and intensive glucose-lowering with alternate treatments, in overweight T2D patients [4][5]. These cardiovascular benefits were confirmed in a number of subsequent studies [6][7][8][9], although, in a minority of studies, neutral or deleterious cardiovascular outcomes were reported with metformin use in T2D [11][12].

Metformin is an effective glucose-lowering agent in both the fasting and postprandial states. The latter is notable given that postprandial hyperglycemia represents an independent cardiovascular risk factor [12]. Fluctuations in postprandial blood glucose, in particular, are strongly associated with the macrovascular complications of T2D [13], while a rapid rise in postprandial blood glucose is associated with endothelial injury and initiation of a pro-atherogenic cascade [14][15]. It is generally considered, however, that the cardiovascular benefits of metformin are primarily related to extra-glycemic mechanisms. Mechanistic studies have hitherto focused on the direct effects of metformin on the heart and vasculature. A heterogenous array of potential mechanisms have been identified, including changes in left ventricular function, attenuation of ischemic-reperfusion injury, reduction in sympathetic activity and adrenergic receptor down-regulation, improved endothelial function, changes in the renin-angiotensin-aldosterone system, blood pressure lowering and anti-inflammatory effects. Not surprisingly, the mechanisms accounting for cardiovascular benefit with metformin therapy remain contentious [16].

The anti-hyperglycemic mechanisms of metformin have been historically ascribed to the effects mediated following drug absorption, particularly hepatic glucose metabolism [17]. More recently, there has been increasing recognition that the gastrointestinal tract is, at least, of similar importance, to the liver for glucose-lowering by metformin [18][19][20][21]. Notably, a novel delayed-release formulation of metformin, which releases its active component in the lower jejunum and ileum, induces comparable glucose-lowering compared with standard formulations of metformin, despite minimal bioavailability [19][22].

The potential implications of the gastrointestinal actions of metformin for the cardiovascular system have been largely ignored [23].

Metformin exhibits multiple interconnected gastrointestinal effects, which have a potential significance for cardiovascular function, including inhibition of bile acid resorption, modulation of the gut microbiota, reducing the rate glucose absorption, enhanced GLP-1 secretion and action, slowing of gastric emptying and attenuation of the fall in blood pressure after a meal (Figure 1) [23][24]. 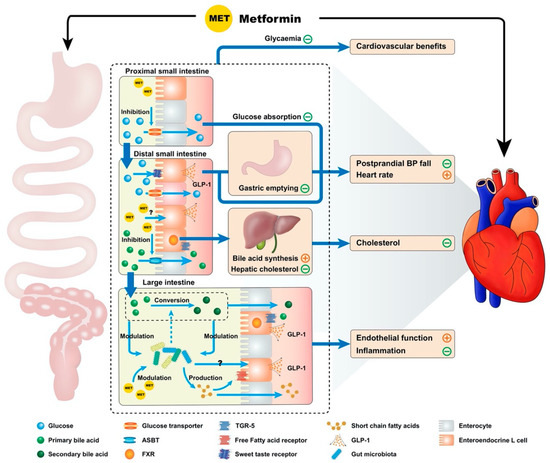 Metformin exerts heterogenous gastrointestinal effects, including suppression of intestinal bile acid resorption, modulation of the gut microbiota, reduction in the rate of glucose absorption, enhancement of GLP-1 secretion and action, and slowing of gastric emptying. While it is increasingly appreciated that these actions are fundamental to its glucose-lowering effect, their potential influence on the cardiovascular outcomes of metformin therapy has received little attention. In an acute setting, metformin has been shown to attenuate the postprandial fall in blood pressure substantially in T2D, in association with the slowing of gastric emptying and stimulation of GLP-1 secretion. However, the definition of mechanisms underlying the cardiovascular benefits of metformin are limited by inconsistency in the outcomes of animal and human studies, and the current lack of clear associations between these mechanisms and cardiovascular health in the longitudinal studies of T2D patients. Mechanistic insights into the relevance of the aforementioned gastrointestinal mechanisms to the cardiovascular outcomes of metformin in longer-term studies may well refine the clinical application of an “old” antidiabetic drug.