Using renewable energy to convert CO2 to a clean fuel ethanol can not only reduce carbon emission by the utilization of CO2 as feedstock, but also store renewable energy as the widely used chemical and high-energy-density fuel, being considered as a perfect strategy to address current environment and energy issues. Developing efficient electrocatalysts, photocatalysts, and photoelectrocatalysts for CO2 reduction is the most crucial keystone for achieving this goal. Considerable progresses in CO2-based ethanol production have been made over the past decades. This review provides the general principles and summarizes the latest advancements of electrocatalytic, photocatalytic and photoelectrocatalytic CO2 conversion to ethanol. Furthermore, the main challenges and proposed future prospects are illustrated for further development of the clean fuel ethanol production.

With the fast development of the economy and society, the ever-increasing demand for energy all over the world while the limited fossil fuel resources lead to an aggravated energy crisis [1][2]. The huge consumption of fossil fuels causes the constantly accumulating of CO2 in the atmosphere. By May 2020, the concentration of atmospheric CO2 reached another record of 412.69 parts per million (ppm) [3], far exceeding the upper safety limit of 350 ppm, which may cause disastrous environmental consequences such as global warming, polar glacier melting, rising sea level, etc. [4]. On the other hand, the renewable energy sources from wind, sun, etc., have been rapidly developed in recent years. Unfortunately, the power from these renewable energy sources cannot be integrated into the electric grid well due to the intrinsic inferiorities of instability and anti-peak-load regulating, resulting in the huge waste and development limitation [5].

An ideal strategy to solve the energy and environmental problems is to convert CO2 into fuels and value-added chemicals using renewable electricity and/or solar energy. Such a strategy can not only reduce the concentration of atmospheric CO2 through the utilization of CO2 as feedstock, but also store renewable energy as fuels and useful chemicals, thus relieving our dependency on fossil fuels [6][7][8]. Powered by renewable electricity and/or solar energy, CO2 can be reduced to clean fuels, such as carbon monoxide (CO), methane, formic acid, methanol, ethanol, etc. [9][10]. By contrast, ethanol, a kind of clean and renewable liquid fuel with a higher heating value of −1366.8 kJ·mol−1, is a preferred product. With a higher energy density, easier to store and transport than that of gas products, ethanol has also been considered as one of the optimal candidate fuels that substitute or supplement fossils in many applications [11]. Ethanol is the most used and largest additive to gasoline, and can be seamlessly accessed by the widest energy infrastructures. Furthermore, ethanol is also an important and widely used common chemical feedstock for organic chemicals and medical disinfectant. Large-scale ethanol production to date is mainly based on the fermentation of agricultural carbohydrates such as cane sugar and cornstarch. However, it seems that nature cannot provide both food and fuel for a still-growing and increasingly energy-hungry world population in the near future Therefore, CO2 conversion to ethanol driven by renewable energy offers a good alternative (Scheme 1). 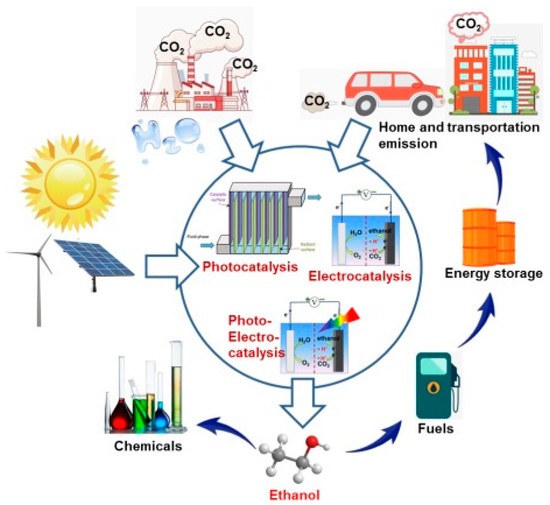 Scheme 1. Schematic illustration of carbon recycling via CO2-to-ethanol conversion powered by renewable energy sources such as solar and wind.

According to the variety of renewable solar energy assistance, CO2-to-ethanol conversion can be divided into three major categories: electrocatalytic reduction by an electrolyzer powered by commercial photovoltaic (PV) devices, photocatalytic reduction by an efficient photocatalyst, photoelectrocatalytic reduction by a semiconducting photocathode and an electrolyzer [12]. Over the past decades, numerous efforts have been devoted to researching the three kinds of CO2 reduction techniques for the production of clean fuel ethanol [13][14][15][16]. Different from C1 products (CO, CH4, formate, methanol, etc.), the multiple electron–proton transfers involved with ethanol production from CO2 have been reported with low efficiency due to the kinetic barriers. Typically, multiple electron–proton transfer steps must be orchestrated with their own associated activation energies, thus presenting kinetic barriers to the forward reaction [12]. Therefore, efficient and robust electrocatalysts, photocatalysts and photoelectrocatalysts are required to promote this kinetically sluggish reduction process.

2. The Advances of CO2 Reduction to Clean Fuel Ethanol

Considering the fact that the linear CO2 molecule is fully oxidized and extremely stable, it is rather difficult to convert CO2 into fuels, especially for ethanol production involving multiple electron–protons. Therefore, whether using electricity, sunlight or both of them as input energy, it demands the corresponding specific catalysts to accelerate the CO2 reduction reaction. Essentially, the performance of CO2 reduction depends on the properties of the applied catalysts. In the following part, recent important progress in material exploration for CO2 conversion to ethanol will be discussed in three categories, namely electrocatalysts, photocatalysts and photoelectrocatalysts, as shown in Scheme 2.

Scheme 2. Illustrations of the catalysts and the corresponding strategies for achieving elctrocatalytic, photocatalytic and photoelectrocatalytic CO2 conversion into clean fuel ethanol, respectively.

Since the pioneering work on CO2 electroreduction to HCOOH over mercury cathodes was reported in 1954 [17], much research has been done on electrocatalytic CO2 conversion into fuels [10][15][18]. However, studies on the ethanol production from CO2 electroreduction have increased in the last five years. In this process, theoretically, electrons are released from water oxidation at the anode and travel through an external wire to the catalysts’ surface at cathode to reduce CO2 to various products. The ethanol production is a combination of the oxidation reaction at anode and reduction reaction at cathode involving twelve electron–protons. As the catalysts for CO2 electroreduction, metals and metallic complexes have been extensively investigated [18][19]. Among these metal-containing catalysts, Cu-based catalysts have been reported as the most promising electrodes that are possibly capable of catalyzing the reduction of CO2 to clean fuel ethanol [20][21]. The unique catalytic property of Cu originates from its moderate binding energy for CO intermediates, as evidenced by Density functional theory (DFT) calculations. The currently identified Cu-based catalysts those can electroreduce CO2 to ethanol include modified Cu (morphology, size, facet, doping, organic additives, et al.), Cu-based alloys, Cu/carbon composites and Cu-based metal-organic porous materials. Moreover, metal-free nitrogen-doped carbon materials have also been reported recently to be capable of ethanol production from CO2.

Photocatalytic CO2 reduction has been paid consistent attention for several decades based on the utilization of solar energy and the concept of artificial photosynthesis [22][23][24]. During the reduction process of CO2, photocatalysts play a key role in lowering the potential of the electron-proton transfer reaction and the eventual catalytic performance. To date, many kinds of semiconductors have been employed as the photocatalysts for CO2 reduction to solar fuels [25][26]. However, very few semiconductors like TiO2 and graphitic carbon nitride (g-C3N4) can photocatalyze the ethanol formation.

Photoelectrochemical reduction of CO2 has been investigated following its first discovery by Halman in 1978 [27]. Employing semiconductors, such as GaP, silicon and CdTe, as the photocathodes [12][14], the conversion of CO2 into hydrocarbons, especially ethanol, can be realized in the presence of water under illumination and bias potential. In spite of the increasing researches on photoelectroreduction of CO2 in the last five years, the reports on clean fuel ethanol formation were extremely rare. For instance, a Cu/Cu2O electrode prepared by electrochemical deposition method catalytically reduces CO2 to ethanol with the maximum yield of 5.0 ppm in 0.1 mol L−1 Na2CO3 under the bias potential of 0.2 V vs. Ag/AgCl and UV-Vis irradiation [28]. Equipped with Pt-reduced graphene oxides (RGO)/Cu foam cathode and TiO2 nanotube photoanode, the phoelectrochemical cell exhibited an ethanol production rate of 105 nmol h−1 cm−2 under the potential of 2 V and UV-Vis irradiation, which was even significantly higher than that of the simple sum of electrochemical and phochemical processes (82 nmol h−1 cm−2) [29], indicating the synergetic effect of electrochemical and phochemical reductions. Importantly, ethanol was observed as the main product over the boron-doped g-C3N4 electrodes with or without coupling with Au, Rh or Ag [30]. The yield of ethanol was maximized on boron-doped g-C3N4/Au electrode with a value of around 150 nmol under the bias potential of −0.4 V vs. Ag/AgCl and simulated solar irradiation. Afterwards, ZIF-8 was incorporated into Ti/TiO2 nanotubes electrode to increase the photocurrent, resulting in the ethanol formation of up to 10 mmol L−1 under the bias potential of 0.1 V vs. Ag/AgCl and UV-Vis irradiation for three hours (Figure 1) [31]. According to the results mentioned above, highly efficient production of ethanol through photoelectrocatalytic route and even industrialization has a long way to go.

In conclusion, recent research has indicated the feasibility of producing ethanol from CO2 by electrochemical, photochemical and photoelectrochemical processes using solar energy and/or renewable electricity over advanced catalysts. Despite the challenges ahead, it is promising to develop highly efficient and economical catalytic systems that use renewable energy to selectively convert CO2 into clean fuel ethanol over active catalysts in the near future, thus realizing the sustainable development of human beings.

In future studies, more effort should be directed towards the following strategies to boost the performance of electrocatalysts for CO2-to-ethanol conversion: (1) introducing edges by nanostructuring with cubes, quantum dots, etc., introducing defects by doping and making pores, or introducing grain boundaries by controlled electrochemical growth, into the catalyst surfaces to increase the active sites; (2) designing nanostructured catalysts with special morphologies, such as multi-hollow, core-shell and nanoporous structures, which can confine the CO intermediates for further C–C coupling and ethanol formation; (3) employing metal or nonmetal doping strategies to chemically modify the structures of catalysts; (4) exploring composite materials with synergetic effect as the potential catalysts for CO2 reduction to realize the cascade reaction; (5) using certain catalysts with high overpotentials towards HER to suppress HER, which would compete electrons with CO2 electroreduction reaction in the result of low efficiency; (6) incorporating suitable molecular catalysts to reduce the overpotentials of CO2-to-ethanol conversion by stabilizing the intermediates; (7) designing and optimizing flow cell system using gas-diffusion-electrode to improve the current density to commercially relevant levels; (8) designing catalysts with typical structure models for density functional theory (DFT) calculation and using operando techniques to study the reaction mechanism of CO2 reduction.

In spite of the great efforts, it still seems quite challenging to efficiently photoreduce CO2 to desirable products. Although CO2 could be reduced to ethanol using some certain semiconductor catalysts by photochemical route, the yield and selectivity of ethanol was extremely low and hard to practice on a commercial scale. In the following, several strategies that may promote the ethanol production from photocatalytic CO2 reduction are proposed: (1) designing semiconductors with high surface area and porosity to maximize the adsorption of CO2 and intermediates for further C–C bond formation; (2) coupling two semiconductors with proper band structures for the preferred spatial separation of photo-generated electrons and holes to the electron–hole recombination; (3) introducing oxygen vacancies into semiconductors, which facilitate trapping electrons and activating CO2; (4) applying a certain amount of external bias voltage to promote the separation of photogenerated electron–hole pairs; (5) deeply understanding the photocatalytic CO2 reduction process through DFT calculations and advanced in situ techniques for further exploration on highly active catalysts, photoreducing CO2 to ethanol.