Many people still die of lung cancer (LC), a disease that is mainly related to cigarette smoking. Smokers may also develop chronic obstructive pulmonary disease (COPD). COPD is a risk factor per se for LC. Cigarette smoking and other chemicals injure DNA on a daily basis. A repair mechanism based on PARP-1 and PARP-2 activity can restore damaged DNA to keep cells alive. However, cancer cells also take advantage of this mechanism to survive. Fifteen LC-COPD and 15 LC patients were enrolled in this study to elucidate whether COPD influences DNA damage-dependent PARP activity in lung tumors. DNA damage, PARP activity, PARP-1 and PARP-2 expression were analyzed in tumor and non-tumor lungs obtained during surgical resection of the lung tumors. DNA damage and PARP activity were increased only in tumors in LC-COPD patients. However, PARP-1 and PARP-2 expression decreased in tumors of both patient groups. LC patients with COPD may benefit from PARP inhibitor therapies.

Lung cancer (LC) is a leading cause of death worldwide[1][2][3][4]. Surgical resection of lung tumors continues to be the main elective treatment in LC patients[5][6][7]. However, this approach cannot be applied to patients with advanced stages. Other options such as chemotherapy and immune therapy with or without other biological or pharmacological agents are indicated in these cases[3].

Several mechanisms and risk factors are involved in the pathophysiology of non-small cell LC (NSCLC)[6]. Underlying respiratory conditions favor the incidence of lung tumors in patients, especially in those with emphysema[8][9]. Mechanisms such as inflammation, oxidative stress, epigenetics alterations, and the tumor microenvironment underlie the pathophysiology of tumor development in patients with chronic respiratory disorders including stromal structures and immune cell profiles, and have an impact on the patients’ survival [10][11][12]. Indeed, chronic obstructive pulmonary disease (COPD) is a major risk factor for LC development [9][13].

Interestingly, poly (ADP-ribose) polymerase-1 (PARP-1) has also been shown to play a significant role in elastase-induced lung inflammation and emphysema in a mouse model of COPD[14]. PARP-1 and PARP-2 catalytically cleave NAD+ and transfer ADP-ribose moieties onto specific amino residues of acceptor proteins in response to DNA damage. This process, termed poly ADP-ribosylation (PARylation), forms poly (ADP-ribose) polymers (PAR), which vary in size and branching. PAR elicit functional and structural changes in the target proteins[15][16][17]. PARP activity is upregulated in response to DNA damage to maintain DNA stability, integrity, and repair[18]. Accordingly, PARP inhibitors have emerged as promising therapeutic tools in cancer. They may act as potentiators of chemotherapeutic agents, immune therapy, and radiotherapy[19]. They can also be administered alone in tumors characterized by breast cancer (BRCA) gene mutations[20]. Accordingly, PARP inhibitors are currently in use for the treatment of several cancer types such as breast and ovarian cancer[21]. In small cell lung cancer (SCLC), the combination of PARP inhibitors and platinum based-chemotherapy showed superior efficacy compared to chemotherapy alone in a preclinical model[22]. Whether PARP-1 and PARP-2 expression and activity are also involved in LC development in patients with underlying COPD remains an open question. 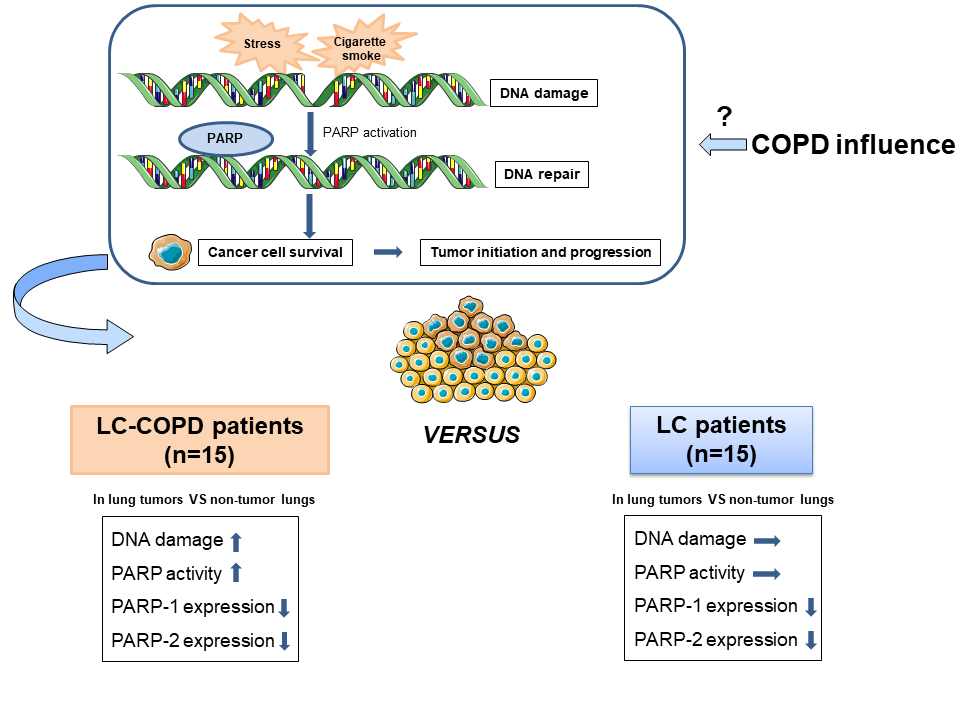 PARP-1 is the most relevant enzyme of the PARP family as its activity accounts for 85–90% of poly (ADP-ribosyl)ation in cells[23][24]. PARP activity plays a significant role in DNA repair through the induction of post-translational modifications of the target proteins by the transfer of ADP ribose moieties using NAD+ as a substrate [23]. Other effects of the overaction of PARP include the occurrence of necrosis in tissues in response to persistent DNA damage. As such necrosis may take place as a result of depletion of the substrate NAD+ [25].

In the current investigation, levels of DNA damage, as measured by γ-H2AX significantly increased in the tumors of LC-COPD, suggesting that severe injury of the DNA took place in the tumor cells of these patients. Likewise, the overactivation of PARP activity took place only in the tumors of the same patients. Moreover, a significant positive correlation between pack-years and PARP-2 expression was only observed in the LC-COPD patients. These are relevant findings that suggest that chronic cigarette smoking induces DNA damage, which may be counterbalanced by PARP activity. In fact, DNA damage and PARP-1 overactivation induced the parthanatos pathway of cell death as a result of the exposure of human bronchial epithelial cells to cigarette smoke[26]. Moreover, in patients with stable COPD, systemic PARP-1 activation was also observed in the lymphocytes along with increased inflammation and oxidative stress[27].

Importantly, the expression of PARP-1 and PARP-2 was significantly lower (the decrease ranged from 44% to 52%) but did not disappear in the tumors of both groups of patients, irrespective of COPD. Interestingly, despite the reduced expression of PARP-1 and PARP-2, overall PARP activity was maintained and even significantly increased in the tumors of the patients with the underlying respiratory condition. These findings are in agreement with previous results, in which the protein content of PARP isoforms did not influence PARP activity in several cancer cell lines[28]. Biological mechanisms such as endogenous activation or repression and/or post-translational modifications may account for the lack of correlations between PARP enzyme activity and protein expression levels.

Furthermore, the findings of the present investigation suggest that stimuli beyond the cancer phenotype were most likely part of the pathophysiology of the overaction of PARP activity. In keeping with this, elastase-induced emphysema was shown to increase PARP activity in mouse lungs in an experimental model of COPD[14]. Taken together, these results point to a potential role of PARP inhibitors in the treatment of LC patients, particularly in those with underlying respiratory conditions as tumors of those without COPD did not experience an increase in PARP activity. This scenario might account for the lack of significant beneficial effects of the PARP inhibitor, olaparib in combination with gefitinib in a phase 2 trial in NSCLC patients[29].

In summary, researchers studied two different groups of patients with LC. The differential phenotypic features of the patients associated with the underlying respiratory disease evidenced that these aspects should be taken into account when designing the best therapeutic strategies for the management of LC patients, especially as the burden of DNA damage and the activity of PARP enzymes were only significantly greater in the tumor specimens of patients with underlying COPD.