Probiotics in Obesity and IBD

The Firmicutes/Bacteroidetes (F/B) ratio is widely accepted to have an important influence in maintaining normal intestinal homeostasis. Increased or decreased F/B ratio is regarded as dysbiosis, whereby the former is usually observed with obesity, and the latter with inflammatory bowel disease (IBD). Probiotics as live microorganisms can confer health benefits to the host when administered in adequate amounts. There is considerable evidence of their nutritional and immunosuppressive properties including reports that elucidate the association of probiotics with the F/B ratio, obesity, and IBD. Orally administered probiotics can contribute to the restoration of dysbiotic microbiota and to the prevention of obesity or IBD. However, as the effects of different probiotics on the F/B ratio differ, selecting the appropriate species or mixture is crucial.

In the human body, trillions of microorganisms live in symbiosis with the host and are mainly located in the gastrointestinal tract, skin, saliva, oral mucosa, conjunctiva, and vagina[1]. Microorganisms that inhabit the gastrointestinal tract (i.e., gut microbiota) number approximately 1 × 1014[2] and play an essential role in intestinal homeostasis, development, and protection against pathogens. Furthermore, their presence in the gut is associated with immunomodulatory and metabolic reactions[3]. Gut microbiota consists of bacteria, yeasts, and viruses. Bacteria in the gut are represented by more than 1000 species that belong to six dominant phyla: Firmicutes, Bacteroidetes, Actinobacteria, Proteobacteria, Fusobacteria, and Verrucomicrobia. Bacteria from the phyla Firmicutes and Bacteroidetes are the most common, representing 90% of the gut microbiota[4]. The gut microbiota of a healthy individual differs in different parts of the gastrointestinal tract and changes with time due to aging (including infant development) and environmental factors such as dietary habits, lifestyle, and antibiotic consumption. Large differences in microbiota composition exist among individuals, with the differences attributed to age, ethnicity, lifestyle, and diet[4][5]. Different microbiota are classified into three distinct enterotypes[6]. Such variations are considered physiological and consistent with healthy microbiota. Nevertheless, changes in microbiota composition are often related to diseases, also termed dysbioses. However, the causality between altered microbiota and various diseases is often unclear.

To somewhat simplify the complex issue of microbiota composition, the present review only addressed the two major bacterial phyla in the gastrointestinal tract: Firmicutes and Bacteroidetes. The ratio between these two phyla (the Firmicutes/Bacteroidetes (F/B) ratio) has been associated with maintaining homeostasis, and changes in this ratio can lead to various pathologies. For example, increases in the abundance of specific Firmicutes or Bacteroidetes species lead to obesity and bowel inflammation, respectively[7][8]. The phylum Firmicutes includes Gram-positive bacteria with rigid or semi-rigid cell walls that are predominantly from the genera Bacillus, Clostridium, Enterococcus, Lactobacillus, and Ruminicoccus[4][9], whilst the phylum Bacteroidetes includes approximately 7000 different species of Gram-negative bacteria that are predominantly from the genera Bacteroides, Alistipes, Parabacteroides, and Prevotella[10]. Although there is much focus on the F/B ratio, one should bear in mind that this ratio can be affected by an increase in other phyla and that dysbiotic increases in other phyla do not necessarily change the F/B ratio. The most variable phylum was demonstrated to be Proteobacteria, which contributes to dysbiosis[11] and is correlated with a decrease in Firmicutes and general microbial diversity in inflammatory bowel disease (IBD)[12].

Balancing the intestinal ecosystem is an important aspect of maintaining normal human body function, and many therapeutic strategies are designed to achieve an appropriate F/B ratio. The administration of probiotics, prebiotics, synbiotics, phage therapy, fecal transplantation, and bacterial consortium transplantation have all been tested as methods to modulate gut microbiota[13]. The present review thus also focuses on the use of probiotics for balancing the F/B ratio and, consequentially, treating obesity and IBD.

According to the WHO definition, probiotics are live microorganisms that can confer health benefits to the host when administered in adequate amounts. By modifying the microbiota, probiotics can potentially treat several diseases[14] and exert anti-obesity and anti-inflammatory effects[7]. As illustrated in Figure 1, probiotics contribute to the alteration of the F/B ratio, thereby influencing host obesity or intestinal inflammation. The aim of this review was to elucidate the effects of different probiotic species on obesity and inflammation as well as their relationship with the F/B ratio. 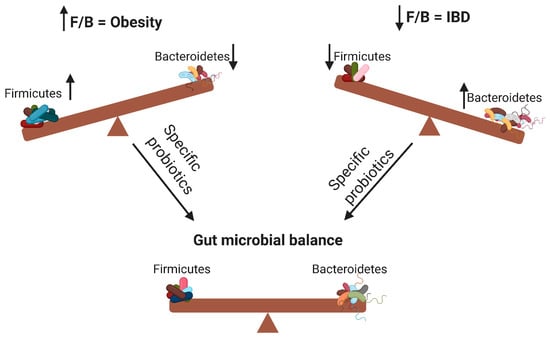 2. The Role of Gut Microbiota in Nutrition and Obesity

The gut microbiota plays an essential role in food digestion due to the presence of genes, which encode digestive enzymes that are not present in human cells, but are associated with the metabolism and fermentation of several food compounds that present nutritional benefits to the host. The most abundant metabolic products of gut microbiota are short-chain fatty acids (SCFAs), mainly acetate, propionate, and butyrate, which are produced by anaerobic fermentation of undigested carbohydrates[15]. The gut microbiota also plays a role in metabolizing pharmacologically active compounds such as phytoestrogens[16]. Furthermore, dysbiosis of the gut microbiota can lead to several pathologies including diabetes and obesity[17].

Obesity is a major public health problem that is increasing on a global scale due to the modern lifestyle. It is estimated that by 2030, 38% of the adult population will be overweight, and 20% will be obese[18]. The etiology of obesity is diverse, and many factors play a role in its development. The gut microbiota is involved in the occurrence of obesity by direct interactions with proximal organs or indirect interactions with distant organs through metabolic products (mainly SCFAs) including communication with the liver, adipose tissue, and brain[19]. SCFAs play a crucial role in the development of obesity. They interact with adipose tissue via two G-protein-coupled receptors expressed in adipocytes (Gpr41 and Gpr43); this promotes adipocyte formation and inhibits lipolysis[20]. Furthermore, SCFAs downregulate the synthesis of the hunger-suppressing hormones leptin, peptide YY, and glucagon-like peptide 1[21]. The gut microbiota can also affect appetite and satiety via vagus nerve activation or immune-neuroendocrine mechanisms[19]. The gut microbiota also promotes bile acid metabolism and modifies hepatic triglyceride and glucose homeostasis through the farnesoid X receptor [22]. Modulating the gut microbiota with different diets and supplementation with probiotics and dietary fibers is a promising approach for the treatment and prevention of obesity [23].

3. The Role of Gut Microbiota in IBD

IBD represents a group of intestinal disorders, characterized by a complex of inflammatory reactions in the small and large intestine. IBD encompasses two types of inflammatory diseases: ulcerative colitis (UC) and Crohn’s disease (CD). The two diseases are differentiated by their location: UC mainly causes long-lasting inflammation in the colon and rectum, while CD causes inflammation anywhere along the digestive tract, but mostly in the ileum, colon, or both[24]. The exact etiology of these immunological disorders is unclear; however, the gut microbiota is known to importantly contribute to the initiation and progression of IBD. Certain gut bacterial species can adhere to the gut mucosa and invade mucosal epithelial cells, which results in an inflammatory response mediated by the production of tumor necrosis factor-α (TNF-α) by monocytes and macrophages. TNF-α plays a pivotal role in a variety of immunomodulatory reactions, and is associated with IBD via induction of cell apoptosis and necroptosis [25]. The inhibition of TNF-α can improve the health of patients and results in remission of IBD [26][27].

Gut microbiota can also induce inflammatory reactions through Toll-like receptors (TLRs), which play a vital role in gut immunity and are related to the development and progression of IBD. TLRs maintain gut homoeostasis, control immune responses, and shape the microbiota[28]. They are expressed mainly by immune cells; however, several TLRs are also expressed by intestinal epithelial cells and stromal tissue cells of the gastrointestinal tract (TLR-1–9 are expressed in the small and large intestine in humans and mice) [29]. The majority of TLR activators are pathogen-associated molecular patterns (i.e., microbial compounds mainly found in Gram-negative bacteria). The TLR heterodimers TLR-1/2 and TLR-2/6 recognize triacylated and diacylated lipopeptides, respectively[30], while TLR-4 and TLR-5 can be stimulated by lipopolysaccharides and flagellin, respectively[31]. In many cases of IBD, altered TLR expression and TLR mutations were observed, and their inhibition played a beneficial role in slowing down IBD progression[32]. Conversely, certain TLRs play a protective role and can prevent inflammation in the small and large intestine. For example, TLR-9 recognizes bacterial CpG DNA, and its activation correlates with significant improvement in intestinal wound repair and intestinal protection[33].

Additionally, several gut bacteria directly or indirectly influence innate and adaptive immunity and thus evoke or prevent IBD. For example, macrophages in the gut sense microbial signals that trigger them to produce interleukin (IL)-1β[34]. A group of 17 human and 46 murine Clostridium species affected regulatory T cell differentiation, function, and accumulation in mice colon, resulting in an anti-inflammatory and protective effect [35]. Gut microbiota metabolites can also protect the host from inflammation. SCFAs increase extrathymic regulatory T cell differentiation through the intronic enhancer CNS1[36]. Moreover, SCFAs promote the synthesis of the immunosuppressive cytokine IL-10 in T effector cells[37] and combat oxidative stress in the gut[38]. These findings emphasize the important role of SCFAs in gut homeostasis and the fight against IBD.