Biopolymers derived from polysaccharides are a sustainable and environmentally friendly alternative to the synthetic counterparts available in the market. Due to their distinctive properties, the cyanobacterial extracellular polymeric substances (EPS), mainly composed of heteropolysaccharides, are a valid alternative to address several biotechnological and biomedical challenges. However, for the successful exploitation of cyanobacterial EPS, it is important to obtain polymers with high purity levels and exploit different strategies of  functionalization  to obtain EPS tailored for given applications. Considering all this, available approaches to isolate, purify and chemically modify cyanobacterial EPS are discussed.

In the last years, significant advances were made on the characterization of cyanobacterial EPS [2][3] and the validation of their biotechnological and biomedical potential [4][5][6][7][8][9][10]. However, the development of biomaterials based on these polymers has only recently started to be explored [11][12][13][14]. In this context, the repertoire of cyanobacterial EPS-based applications such as scaffolds, coatings, and drug carriers can be significantly expanded by optimizing their isolation/purification and obtaining designer biopolymers with specialized features.

3. Isolation and Purification of cyanobacterial EPS

The isolation and purification of the polymers must be cost effective, scalable, and easy to perform. It is also important to take into consideration that the methods selected influence the polymers’ yield and quality [15] and, thus, it may be necessary to adapt the protocols to the characteristics of the polymers and their final application [16]. One of the main aspects to consider is whether the EPS are attached to the cells or released to the culture medium (RPS). In the case of the EPS attached to the cells, detachment can be achieved using formaldehyde, glutaraldehyde, ethylenediaminetetraacetic acid (EDTA), sodium hydroxide, sonication, heating, cell washing with water, complexation, or ionic resins [15][17]. To select one of these methods, it is important to not only evaluate the yield, but also the levels of contamination of the polysaccharides with other cellular components. Regarding the isolation of RPS, the conventional methods based on precipitation techniques have been described recently (see [16]). Despite their efficiency, the costs and requirement of large amounts of precipitating agents led to the search of alternative techniques more suitable at the industrial scale, such as tangential ultrafiltration [17][18]. However, this methodology may need to be improved to minimize the problems of high viscosity of polymer solutions resulting in membrane clogging [17]. Tangential ultrafiltration can also be used to obtain a concentrated polymer solution before precipitation or spray-drying, increasing the efficiency of these processes.

After isolation of the EPS, contaminants such as inorganic salts, heavy metals, proteins, polyphenols, endotoxins, nucleic acids, or cell debris may still be present in the polymer solution. However, it is necessary to have polysaccharides with high purity levels to accurately determine their structure and composition and to obtain reproducible results for therapeutic applications [19]. Inorganic salts, monosaccharides, oligosaccharides and low molecular weight non-polar substances can be removed by dialysis. The choice of device, the molecular weight cut-off, and duration of the dialysis is very important to determine the success of this method. However, at an industrial scale, dialysis may not be a viable option. An alternative way to remove inorganic salts is through ion exchange resins, normally in the form of beads [20]. Removal of peptides and proteins can be achieved using different methods, including protease (e.g., pronase) treatment or the Sevag method (usually less efficient) [20][21]. Trichlorotrifluoroethane and trichloroacetic acids can also be used to remove proteins from the polysaccharide’s solution. However, it is necessary to consider that the first is highly volatile and, thus, has to be employed at 4 °C limiting its use, while the trichloroacetic acid is widely used but its acidity can damage the polymer structure [20][21]. The levels of polyphenol contaminants are usually reduced with charcoal washes and centrifugations, hydrogen peroxide method or functionalized resins with imidazole and pyridine [19][22]. The selection of the best purification methods depends on the characteristics of the polymers, the methods used for their isolation, and the envisaged application.

The presence of endotoxins is one of the major issues to be addressed before any biomaterial is consider safe to be used. Endotoxins are mainly due to the presence of LPS, with lipid A being responsible for most of the biological activity of these contaminants [23]. Endotoxins can significantly affect the biological effects of the polymers by eliciting a wide range of cellular responses that compromise cell viability [24][25]. Therefore, limits are imposed by regulatory entities ([26], pp. 171–175, 520–523) As an example, the food and drug administration (FDA) adopted the US Pharmacopoeia endotoxin reference standard, limiting the amount of endotoxins in eluates from medical devices to 0.5 Eurotoxin Units (EU)/mL [27]. Endotoxins are highly heat-stable and not easily destroyed by standard autoclave programs [28]. However, they can be removed by other techniques including ultrafiltration, two-phase extraction, and adsorption [23], although the efficiency of these methods depends on the characteristics of the polymer.

Depending on the application, it may be necessary to isolate fractions of the polymers with specific molecular weights. Fractionation is usually achieved by ultracentrifugation, with the added advantage of simultaneous elimination of contaminants [29]. Filtration and ultrafiltration are also popular alternatives, however, depending on the material of the filter membrane, the polysaccharides can be retained in the filter, decreasing the yield of the purification [30]. Other methods include affinity chromatography, gel chromatography, anion exchange chromatography, cellulose column chromatography, quaternary ammonium salt precipitation, graded precipitation methods, and preparative zone electrophoresis (reviewed in [20]).

The development of polysaccharide-based biomaterials often requires the chemical functionalization of the polymers. In this context, the characteristics of cyanobacterial EPS, offer a vast range of opportunities for targeted modifications (Figure 1). Successful examples of these functionalization reactions have already been described for other bacterial EPS [31][32][33][34][35][36][37][38]. The hydroxyl groups present in hexoses, pentoses, deoxyhexoses, uronic acids, and aminosugars can act as nucleophiles in base-catalyzed esterification reactions in the presence of anhydrides, esters, or carboxylic acids (Figure 1A–C). This strategy has been successfully used to fabricate photocrosslinkable hydrogels based on dextran and hyaluronic acid [32][34][38]. Another approach consists of the oxidation of diols in the presence of sodium periodate to generate reactive aldehydes, which can further react with primary amines in reductive amination reactions (Figure 1D) to produce hydrogels [31][36]. Hydroxyl groups can also undergo free radical polymerization reactions to generate graft copolymers for drug delivery (Figure 1E), as previously demonstrated for xanthan gum [33]. The carboxylic groups present in uronic acid residues allow the polymers’ functionalization through esterification or carbodiimide reactions, with the latter being particularly interesting for bioconjugation (Figure 1F) [35][37]. On the other hand, free amino groups from glucosamine residues can react with anhydrides and carboxylic acids to form amides (Figure 1G,H), or with aldehydes to form Schiff bases, which can be further reduced to imines. Overall, these chemical modifications are valuable strategies to obtain designer polymers with improved properties suitable for the development of novel biomaterials. 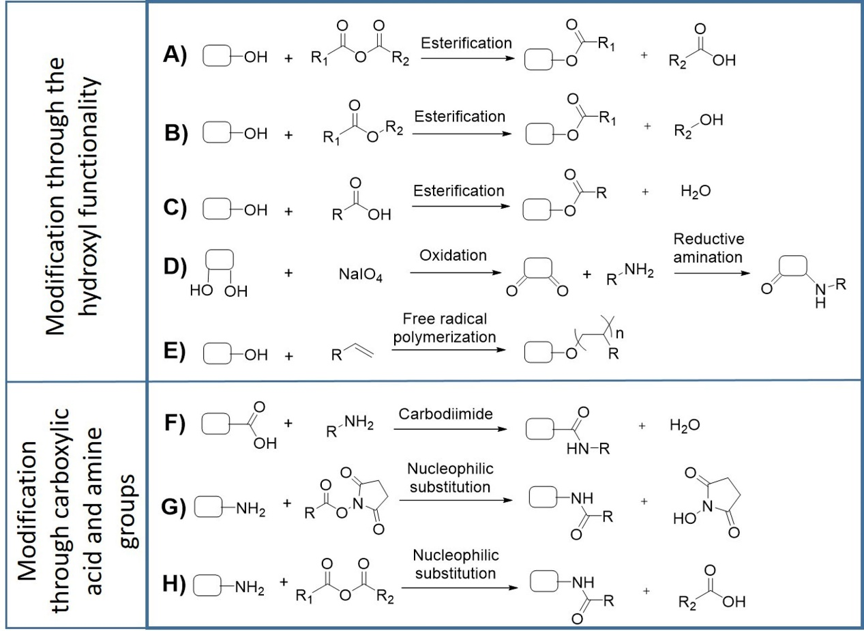 For their use in biomedical applications, the polymers and/or derived biomaterials have to be biocompatible, i.e., be able to “perform with an appropriate host response in a specific application” [39]. Biocompatibility is usually evaluated in vitro by accessing the effects that biopolymers or biomaterials have on living cells [40]. Several guidelines are described in international standard protocols, with the material’s toxicity (defined as cytotoxicity) being the most common and widely used parameter evaluated (ISO 10993-5) [41]. Depending on the application, biotolerability, i.e., “the ability to reside in the body for long periods of time with only low degrees of inflammatory reaction” is an important issue to consider. This property is particularly important for non-degrading or slow-degrading implant materials [39]. Other important biosafety tests include the evaluation of the mutagenic and carcinogenic potential [42][43].

The FT-IR and Raman Spectroscopies as Tools for Bioﬁlm Characterization