This entry describes the main thermal treatments for processing spodumene in order to get easier lithium extraction by hydrometallurgical routes. It shows the importance of the thermal treatment and the need to reduce the energy consumption of this operation.

Lithium is used in several industries as a component of products such as glass–ceramics, greases and casting-alloys, and  the sector of lithium-ion batteries . Over the last two decades, lithium's use in batteries, particularly for making vehicles, has resulted in an increased need for lithium compounds. Global lithium demand has risen to about 60% in this time and a 20% yearly increase is expected over the next few decades [1][2]. Such a boom in lithium production is accompanied by a drastic increase of its price, which has tripled in a little more than three years (from 5000 US dollars per ton in 2014 to more than 15,000 US dollars per ton by the end of 2017) [3]. The astronomical demand for the metal has caught the attention of metallurgists around the globe and has prompted the development of novel beneficiation approaches to meet this demand by focusing on extraction from mineral ores. Extracting lithium from ores has higher operating costs than conventional extraction from brine, however, the theory of supply and demand makes the processing economically prudent because of the increasing price of lithium.

Spodumene is the main ore of interest due to its high lithium content (~8 wt.% as Li2O in a pure mineral specimen) [4][5]. Table 1 shows the mineralogical composition of a typical spodumene ore sample with 2.14 wt.% Li2O. The concentration of Li2O in this ore indicates that it is low grade. Spodumene is a lithium aluminum silicate (Li2O·Al2O3·4SiO2 or LiAlSi2O6) of the pyroxene group; it is found in close association with quartz, feldspar and micas [6]. Its color may vary from purple, green, yellow, gray or white, depending on the presence and concentrations of sodium, manganese, iron, magnesium or titanium [7][8][9].

Table 1. The mineralogical composition of a typical spodumene ore sample.

Spodumene is naturally present in the stable α-monoclinic (highly packed crystal structure) form with high grindability and hence the mineral is difficult to leach without pretreatment. It is made amenable to lixiviation by calcination at 1000 °C to the β-tetragonal form [5]. During the thermal process, there is a dislocation of Al3+ in the α-spodumene leading to a β-spodumene crystal structure with a comparably larger crystal volume. This increases the mobility of lithium atoms which then become easily accessible to aqueous lixiviant solutions [4][10][11]. The phase transformation has also been shown to improve comminution, as β-spodumene is relatively soft and flaky [9][10][12]. Recently, an intermediary hexagonal metastable γ-phase was discovered during calcination. This phase is predicted to influence the extraction of lithium. Therefore the sequence of the phase transformation is now understood to be α→γ→β [4][10][13]. Though interlocking gangue in spodumene can adversely affect downstream beneficiation processes, Salakjani et al. [9] as well as White and McVay [14] indicated that these impurities facilitate heat conduction and efficient transformation since spodumene itself exhibits low thermal conductivity.

Prior to the hydrometallurgical treatment of the ore after calcination, the β-spodumene phase is baked or roasted with additional compounds which define the next processing route as acidic, alkaline or chlorination.

The amenability of spodumene to lixiviation is greatly enhanced by its transformation from the alpha-form to beta-form at elevated temperature, however, a process for direct extraction of lithium from alpha-spodumene using the HF/H2SO4 system was introduced by Guo et al. [15]. The thermal behavior of spodumene has been studied extensively by a number of researchers [4][5][10][11][16] and it is worthy to note that the process is carried out below 1040 °C,  which is the fusion temperature of spodumene [17].

It has been established that the phase change of beta-phase spodumene starts at 800 °C and is completed by 1100 °C, though there is a report of the phase transformation commencing above 634 °C using microwave heating [5][10]. Peltosaari et al. [10] considered the effect of particle size to be insignificant with respect to the conversion rate of spodumene. Salakjani et al. [4] revealed that heating leads to volumetric expansion and makes the ore porous. The final beta-spodumene consequently has a larger surface area which enhances subsequent chemical processing. They found that a greater extent of the beta-spodumene formed corresponded to a higher surface area produced but a relatively low density. It is anticipated that the inversion of alpha-spodumene to gamma-spodumene is exothermic and that the heat released helps to offset the heat requirement of the process, however, the phase change from  alpha directly to beta is endothermic [9][18]. Investigations by Moore et al. [16] indicate that the temperature and the heating method have negligible effect on the mass fraction of the phases transformed during the decrepitation process and that the quantities of inversion products are almost equal at the initial stage before the final conversion to the beta-phase. Conversely, Salakjani et al. [5] explained that temperature and residence time are the major factors that determine the inversion of the phases in spodumene; the temperature requirement is subsequently influenced by the chemical composition and the feed particle size of the spodumene sample.

The phase transformation process at the elevated temperature is known to be influenced by many factors including the heating method employed, the morphology of the sample after comminution and the quantity of gangue minerals present [4][10][11][16].

Recently, microwave heat treatment of spodumene has been studied extensively by several authors and compared with conventional methods [4][5][10][16][19]. Spodumene is passive to microwave irradiation so the heat treatment with this method is made possible by hybrid microwave heating with the aid of SiC [9][10]. It was found that beta-phase spodumene absorbs significantly higher microwave energy than the alpha-phase spodumene, resulting in local sintering when the beta-phase is reached [9]. Treatment of spodumene using microwave irradiation is still under development and much additional research is required to overcome challenges such as local sintering that results in unequal heating, transparency of spodumene to microwave irradiation and other factors that generally affect the treatment of ores using microwave irradiation. Salakjani et al. [9] suggested that mechanical stirring and the addition of additives (which do not affect downstream processes) could be a remedy for the sintering and passive behavior of spodumene to microwave irradiation, respectively. The microwave heat treatment was found to have a fast transformation rate compared with conventional heating. The transformation of alpha-spodumene commenced and was almost complete at 110 °C and 170 seconds of microwave irradiation respectively [10], but it appears that an hour of heating in a muffle furnace is needed to achieve a 100% conversion to the beta-phase [9]. The operating temperature was, however, found to be invariant with regards to the heating methods. There appears to be an inconsistency in the inversion temperatures of these two investigations during the conventional approach. According to Salakjani et al. [9], no phase change was observed for temperatures below 950 °C irrespective of the heating time. They observed the first gamma- and beta-phases at 950 °C for at least 30 min of residence time but Peltosaari et al. [10] observed the first gamma-phase at 800 °C. This inconsistency might be due to some factors such as the concentration of impurities, the amorphous nature created due to the mechanical treatment and even particle size to a lesser degree. A minimum of 5 min of conventional heating at 1100 °C was observed by Salakjani et al. [4] to almost complete the conversion of alpha- to beta-spodumene while Peltosaari et al. [10] indicated that 100% conversion was achieved within 15 min. However, Salakjani et al. [4] observed some gamma-phase present even after 1 h of residence time at 1100 °C.

Comparing the energy requirement for the microwave and the muffle furnace heating for the phase conversion process shows that the microwave approach requires a relatively low energy input for the transformation compared to the conventional method [5]. The conversion to the beta-phase requires 5 times less energy by using microwave heating than conventional furnace. The reason for the high energy requirement in the conventional process can be due to the fact that heating begins from the outside and moves to the inside of the sample by conduction (the furnace needs to heat up evenly before the sample undergoes heating) therefore, most of the energy is wasted while in the microwave process, heating starts from the inside of the sample and extends radially outside (the sample absorbs the microwave radiation directly for heating), leading to little or no loss of energy. In another paper [19], the comparison of the microwave and conventional heat treatment for acid roasting of beta-spodumene showed that microwave heating resulted in higher lithium extraction than the muffle furnace with regards to key parameters like processing time, excess acid and energy requirement. Indeed, 10.4 MJ of energy was needed for the conventional process whereas only 15.4 kJ was required for the microwave for the same quantity of lithium extracted. Microwave irradiation again required shorter time (20 s) to achieve this goal while an hour was needed in the muffle furnace for the extraction. Particle size was found to have an important effect on the amount of lithium extracted by microwave heat. Finer particles have been confirmed to enhance maximum (93%) lithium extraction with as low as 15% excess acid requirement as compared to 80% excess acid, which is normally used in roasting.

Roasting beta-spodumene with appropriate reagents results in a chemoselective ion exchange reaction where lithium is exchanged for atoms of similar characteristics in the reagent used. This may be done after decrepitation where beta-spodumene is roasted with chemicals, or may be performed in-situ during decrepitation. This leads to the formation of soluble lithium salt (such as LiCl, Li2SO4 or LiOH). Various reagents have been employed for forming the lithium salt during roasting and rigorous investigations are ongoing for optimization. Unlike roasting, the decrepitation process appears to be nearly optimized and little can be done to further adjust parameters like the operation temperature and granulometry of the comminuted ore [13]. The reagent used for the roasting determines the name of the process. Generally, at a given pH, reagents are selected based on their selectivity for the metal of interest, stability in the aqueous phase, environmental friendliness, cost and ease of regeneration after dissolution. These reasons have resulted in a series of investigations in search of suitable chemicals that satisfy a majority of these criteria during lithium ore beneficiation.

There are three well-known methods for roasting spodumene. The first is acid roasting, which involves baking the calcined spodumene product with an excess of concentrated sulphuric acid at a temperature of about 250 °C (for conventional heat treatment) or 320 °C (for microwave irradiation for 20 s) [19]. The second is the alkaline process which utilizes limestone (CaCO3) or lime (Ca(OH)2 or CaO) and lastly, the chloride route which uses various chlorinating reagents. There are other new approaches such as the carbonizing (using Na2CO3 in the presence of CO2 and other additives) and fluorination (using NaF). Figure 1 shows the main high-temperature routes for spodumene treatments which are described below (sulfation, alkaline and chlorination processes for processing spodumene). 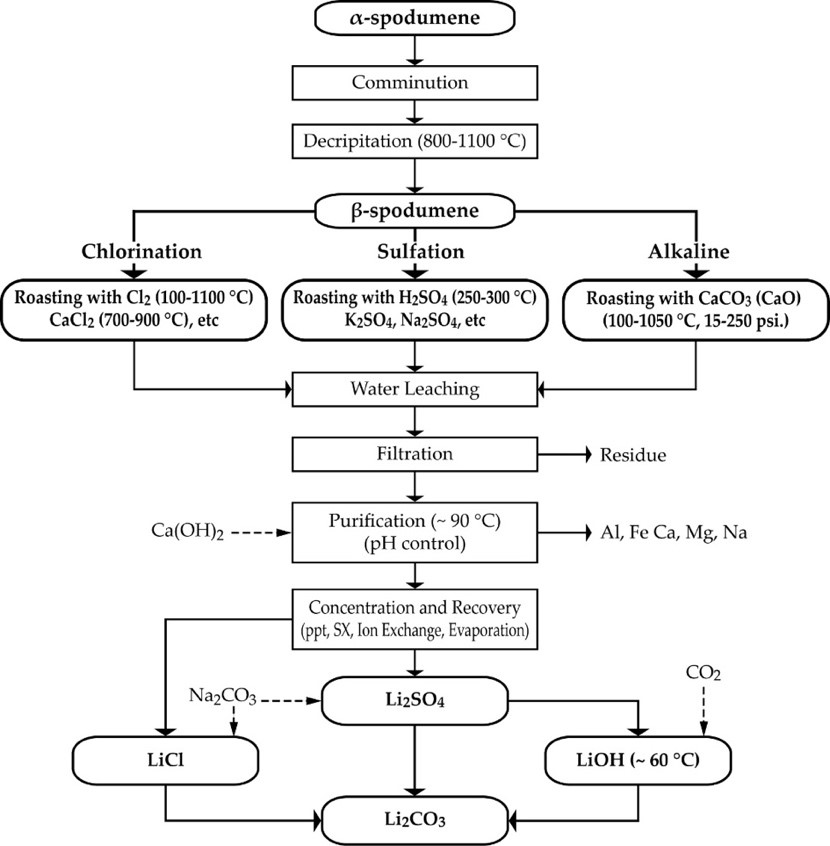 Figure 1. The flow diagram of the major treatment processes for spodumene (chlorination, sulfation and alkaline processes).