It has been estimated that 100 g of bulk soil can host about 2000–4000 nematodes and this amount is increased 5-fold in the rhizosphere. A certain number of these nematodes are pathogenic for plants and cause yield and economic losses. Application of chemical nematicides is the most common method used to reduce nematode populations, but these chemicals can have a negative impact on both the environment and human health. Therefore, other more environmentally friendly methods of suppression of plant-parasitic nematodes have been proposed. Among them, the use of plant beneficial soil bacteria, behaving as biocontrol agents against nematodes, represent a potential alternative to chemicals.

Nematodes (also called roundworms) are small (about 0.2 to 10.0 mm in length) non-segmented invertebrate that have existed for ~500 million to one billion years and are by far the most abundant animals on earth [1][2].

It has been estimated that the number of nematodes in the surface soil reaches 4.4 × 1020 (with a total biomass of ~0.3 gigatonnes), with a higher diffusion in sub-Arctic regions than in temperate or tropical zones [3]. Soil nematodes play a central role in the soil food web being present in all trophic levels; they regulate carbon and nutrient dynamics and modulate the microbial density [4][5]. They are believed to be efficient indicators of biological activity in soils responding to global climate changes, in particular regarding the amount of CO2 in the atmosphere and global warming. In this regard, the level of atmospheric CO2 has increased from 280 to 380 ppm over the last 150 years, and according to some mathematical models, this value is likely to double by the end of this century. Similarly, the global mean temperature is expected to undergo an increase of 1.1–6.4 °C during the same period of time [6]. With elevated CO2 levels, the photosynthetic rate in plants, as well as the net primary production, is expected to increase thereby inducing higher plant biomass and increased root development, followed by an enhanced amount of carbon release through root exudation [7][8]. In addition, several studies have indicated that the increased temperatures from global warming will likely cause a further increment in nematode abundance and, more consistently, in their biodiversity [9][10].

Soil nematodes are classified as bacterivores, fungivores, herbivores, omnivores, and predators [11]. It has been estimated that there are >1 million nematodes species mainly in the sea/ocean with a large number of nematodes in the soil or freshwater, while about 15% are hosted by animals including insects and other invertebrates, as well as domestic and wild animals and man. Approximately 3400 nematodes species behave as plant parasites (http://mrec.ifas.ufl.edu/lso/SCOUT/Nematodes.htm) [12] and cause both significant yield and economic losses in crop production [13]. However, their importance as plant pathogens is difficult to quantify as the number of nematodes found in soil is highly variable within and across terrestrial biomes and can range from dozens to thousands of individuals per 100 g soil [3]. Some species have a limited geographical distribution but can nevertheless cause widespread damage to plants in a localized area, while other species show a narrow range of plant host. About 250 species belonging to 43 genera are considered as a phytosanitary risk (i.e., a pathogenic hazard) and among them, root-knot nematodes (Meloidogyne spp.), as a consequence of their global distribution and high reproductive rate are the most damaging in agriculture, followed by cyst nematodes (Heterodera and Globodera spp.), root lesion nematodes (Pratylenchus spp.), the burrowing nematode (Radopholus similis Cobb), and the stem nematode (Ditylenchus dipsaci Filipjev) [14][15].

The nematode infection cycle begins with insertion of the stylet (a hollow mouth spear) into plant tissue. This causes serious damage to the infected plant where nematodes can increase both direct and indirect symptoms of pathogen damage. Direct symptoms include low development of the whole root system, abnormal root morphology, and enlargement of the roots. Indirect symptoms are typically related to the depletion of photo-assimilates, and the reduction of water and decreased nutrient absorption [15][16]. Nematodes are a major agricultural pathogen causing ~12.3% losses per year globally, when considering the world’s 40 major crops. Moreover, the reduction in crop yield is significantly greater in developing countries (14.6%) than in developed ones (8.8%). It has been estimated that the annual global economic losses in crop yield because of plant-parasitic nematodes in major crops is USD 173 billion, notwithstanding the phytosanitary measures that are applied to control nematodes [17]. Taking into account the changes occurring in atmospheric CO2 levels and global warming, there is a very real possibility that future crop yields will be dramatically reduced by the expected accompanying large increase in soil nematode populations [1].

At present, the control of pathogenic nematodes occurs through the application of chemical nematicides that can act on respiration (isothiocyanates and halogenated aliphatic compounds), the transmission of nerve impulses (organophosphates, carbamate and abamectin), and steroid metabolism. According to their mechanism of action, nematicides can be categorized as fumigants (isothiocyanates and halogenated aliphatic compounds) and non-fumigants (organophosphates, carbamate, abamectin, and fluoroalkenyl). Fumigants affect a wide range of target organisms including fungi, bacteria, and other soil organisms, as well as seeds, so that following their application, environmental disturbance and phytotoxicity may occur. Non-fumigant molecules are formulated as either liquids or granules, both characterized by a low persistence as toxic molecules and little or no phytotoxic activity. However, they are extremely toxic to mammals and insects, having very low LD50 values [15]. Nematicides in the soil can also negatively affect beneficial organisms such as dung beetles, water fleas, earthworms, and nematophagous mites [18]. Moreover, nematicides are more effective when the nematodes are actively searching for a host plant in the soil. Once endoparasitic nematodes penetrate root tissues, they permanently establish themselves there, while migratory endoparasites are able to move within and between roots [19]. Unfortunately, during the internal phase of a nematode’s life cycle the efficacy of chemical nematicides is extremely low. Moreover, nematode strains that have developed a high level of resistance to chemical nematicides have emerged [20]. Based on these considerations, different strategies have been tested to better and more efficaciously control plant-parasitic nematodes in agriculture. Plant roots can release molecules (i.e., attractant compounds) in the rhizosphere that favor the colonization of roots by plant parasitic nematodes, or, alternatively, reduce the damage induced by nematodes (i.e., repellent or nematicidal compounds) [19]. The use of edible mushroom bioproducts for controlling both plant and animal parasitic nematodes has been investigated and reviewed by Castañeda-Ramirez et al. [21]. Plant growth-promoting bacteria (PGPB) is another biological tool that is useful in the control of plant-parasitic nematodes (Figure 1).

Figure 1. Schematic representation of the use of biocontrol plant growth-promoting bacteria (PGPB) to prevent plant damage by plant-parasitic phytopathogenic nematodes.

The term PGPB refers to plant-beneficial bacteria living in the soil immediately surrounding the plant roots (rhizosphere), colonizing the root surface (rhizoplane), or living inside plant tissues (endophytic). Irrespective of their localization, PGPB can enhance plant growth and development, improve the nutritional value of edible seeds and fruits and, at the same time, protect plants from a wide range of biotic and abiotic stress [22].

2. Mechanisms at the Base of Nematode Suppression by PGPB

Rhizobacteria inhibit plant-parasitic nematodes through different methods, both direct and indirect (Figure 2). Direct antagonism is based on the synthesis of lytic enzymes, toxic insecticidal crystal proteins, volatile compounds or parasitism. Indirect antagonism is expressed through competition for nutrients, inducing systemic resistance (ISR), or the release of molecules that modulate nematode behavior including recognition, feeding, and sex ratio [23]. The increase of plant tolerance via 1-aminocyclopropane-1-carboxylic acid (ACC) deaminase expression, lowering ethylene level in plants, is included among indirect mechanisms [1][22]. 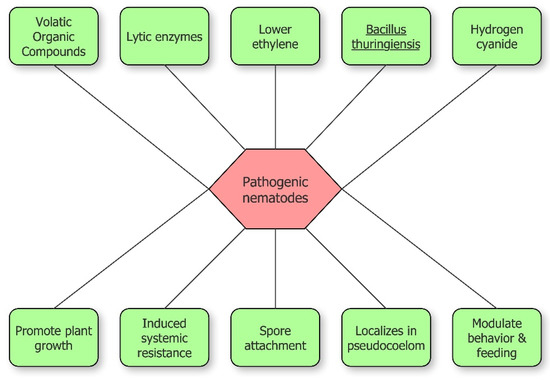