Subjects: Others
View times: 250
Submitted by:

During aging, many biological processes are altered, which globally induce the dysfunction of the whole organism. Cell senescence is one of the causes of this modification. Nowadays, several drugs approved for anticancer therapy have been repurposed to treat senescence, and others are under scrutiny in vitro and in vivo. In particular, molecules named “senomorphics” have been used to prevent or to slow down aging; meanwhile ,those that have been recently identified to induce apoptosis in senescent cells, reducing their number, are called "senolytics”

Aging is a multifaceted process that includes the accumulation of senescent cells, loss of cell renewal at the organ level, and a significant organismal deterioration that increases the vulnerability to death [1]. Physiologically, several alterations accumulate progressively contributing to this picture, including (i) mitochondrial dysfunction; (ii) altered nutrient sensing; (iii) loss of proteostasis; (iv) alteration of intercellular communication; (v) exhaustion of stem cell reservoirs [1]. In this scenario, a series of molecular landmarks of aging has been associated with the cellular senescence in which cells undergo a state of permanent cell cycle arrest while the metabolism results active. In general, in a senescent cell, the reduction of telomerase activity and telomere length [2], an increase in DNA damage, paralleled by a reduction of DNA repair capacity, and a generalized DNA hypomethylation have been observed [1].

One role of senescence process is that to protect the organism against cancer development. In particular, p53 and p16 are critical regulators of the balance senescence/cancer, which are upregulated in senescent cells while down- or dysregulated in cancer [3]. The biological effect of the upregulation of these proteins is a permanent G1 arrest [3]. Recent comprehensive reviews, to which the reader is addressed, detail the molecular mechanisms of cellular senescence or its parallelism/antagonism with cancer [1][4][5]. 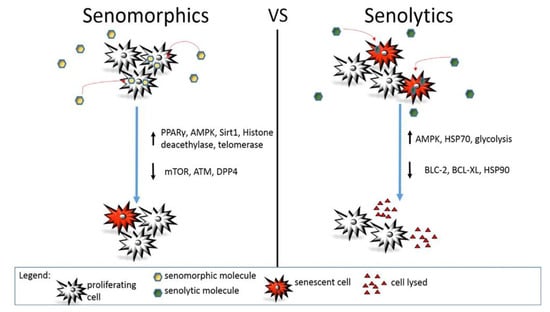 Figure 1. Action mechanism of senomorphic vs. senolytic compounds. Different molecular pathways are modulated by senomorphic or senolytic drugs. In general, senomorphic molecules delay or prevent senescence without affecting the total number of senescent or senescence-prone cells. On the contrary, senolytics induce death in senescent cells reducing their total number in the body or a specific organ.

In the so-called Ink-Apoptosis Through Targeted Activation of Caspase 8 (INK-ATTAC) mice, the expression of FKBP-Casp8 has been induced under the control of p16Ink4a promoter. This strategy is used to increase the expression of FKBP-Casp8 in those cells that have high levels of p16 [6]. In this model, the effect of a substance called AP20187, with the property of triggering apoptosis in senescent cells, was evaluated on physiological heart functions such as heart rate, ejection fraction, and ventricular thickness [6], parameters frequently altered in older adults [7]. Interestingly, in animals injected with AP20187, the cross-sectional area of ventricular cardiomyocytes (vCMs) differed substantially from treated and untreated animals. In particular, in the presence of AP20187, the diameter of vCMs was significantly smaller than in untreated mice [6]. Structurally, AP20187 is made by dimerization between mBAX (a recombinant protein derived from BAX, a pro-apoptotic factor) and FKBP (a neurotrophic molecule), which are proteins involved in the regulation of cellular death [8].

To investigate the effect of atherosclerosis on aging, ApoE−/− mice have been fed with the western diet to facilitate the formation of atherosclerotic plaques [9]. Treated animals showed enrichment of nuclei positive for telomere-associated foci (TAF) in intimal aortic plaque compared to controls [9]. An independent group of ApoE−/− mice received a weekly dose of Dasatinib and Quercetin (D + Q). This treatment determined the reduction of TAF positive cells due to a decrease in DNA damage [9]. Besides, the study revealed that D + Q administration increases the levels of phosphorylation in Serine 1177 of endothelial nitric oxide synthase (eNOS), suggesting for an improved nitric oxide signaling in atherosclerotic vessels with consequent reduction of plaque calcification and a generalized amelioration of the vasomotor dysfunction [9].

The D + Q combination has also been tested in patients with idiopathic pulmonary fibrosis (IPF), a chronic condition in which abundant fibrotic tissue forms between the alveoli interfering with the gas exchanges, by oral administration three days/week for three consecutive weeks [10]. Some physical and pulmonary parameters such as the six-min-walk distance (6MWD), the four meters usual gait speed, the timed five-repetitions chair-stands, the short physical performance battery (SPPB), the grip strength, the forced vital capacity (FVC), and the forced expiratory volume in 1-s (FEV1) have been evaluated [10]. In this experiment, the 6MWD, walk speed, and the SPPB gained more than 5%, while pulmonary functions did not change. Possibly, the D + Q removes senescent cells but does not affect the ECM already synthesized [10].

IPF is known as associated with cellular senescence. The demonstration derives from the observation of sections of human lung tissue obtained from IPF patients where many positive cells for p16, TAFs, and DNA foci have been found [11]. To further explore the effect of D + Q, the combination was tested on human fetal lung fibroblast (IMR90), and it has been observed that the administration of D + Q increased the clearance of senescent cells [11]. In these experiments, INK-ATTAC mice with IPF were used to investigate the efficacy of D + Q further. In these animals, senescence was induced through aerosolized intratracheal bleomycin; successively, mice were treated with AP20187 or D + Q [11]. As a result, treated mice showed clearance of senescent cells, loss of weight, reduction of fibrosis, and reduction of pro-inflammatory cytokines production [11]. Notably, these mice were treated in the early stages of IPF, while in humans, the condition is usually treated in later stages; this discrepancy might be a limiting factor in designing interventions with senolytic agents in IPF and requires much more investigation to understand whether a senolytic approach could be useful in this human pathophysiological context.

In end-stage pulmonary disease, a severe condition in which lung transplantation is the sole therapeutic option currently available, the effects of DPP4 inhibition have been studied in rats [12]. In animals, the tissue damage was induced by ischemia/reperfusion (IR) before pulmonary transplantation [12]. Before surgery, the bis(4-acetamidophenyl)-1-(S)-prolylpyrrolidine-2-(R, S)-phosphonate, alias AB192, was administered to inhibit the activity of DPP4 [12]. As a result, oxygenation was preserved, free oxygen radicals, pulmonary edema, and neutrophil sequestration decreased, suggesting that AB192 might help preserve lung function. This evidence suggests that DPP4 inhibition could be considered a preventive treatment before lung transplantation in humans [12].

In the brain, Tau protein aggregation and precipitation increase cellular senescence contributing to the exacerbation of neurodegenerative diseases such as Alzheimer’s disease (AD) [13]. Interestingly, transgenic mice in which Tau has been overexpressed, the treatment with D + Q reduced the formation of neurofibrillary tangles, determining an increase in senescent apoptotic cells and a better cerebral blood flow [13].

AD is characterized by the accumulation of TAU protein [14] and β-amyloid plaques, which might exacerbate a depression-like behavior [14]. The administration of SB203580, a molecule that inhibits p38MAPK, has been observed to ameliorate the depression [15]. However, in rat models, SB203580 has been injected intra-peritoneally, making this type of administration still not available in clinical treatment [15].

In AD patients and AD mouse models, it has been observed that oligodendrocyte progenitor cells (OPCs) exhibit a senescent phenotype in the presence of amyloid-beta plaques [16]. In this condition, OPCs upregulated the expression of p16 and p21 genes and became SA-β-Gal positive, acquiring a senescent pro-inflammatory phenotype [16]. These alterations did not appear in other cell types such as microglia, astrocytes, and oligodendrocytes, which were not different from those of non-AD patients or normal control mice [16]. In this context, D + Q treatment caused a significant reduction in senescent cells [16]. As a result, the formation of amyloid plaques was significantly reduced, and the learning memory improved in association with the clearance of hippocampal senescent OPCs [16]. Inhibitors of DPP4 have also been tested in AD to restore the hippocampus functionality [16]. In this context, the inhibition of DPP4 improved the stabilization of the SDF-1α/CXCR4 axis, incrementing circulating stem cell progenitors into the damaged brain region [17].

In recent years, in low and middle-income countries, diabetes mellitus type 2 (T2D) has risen dramatically; indeed, about 422 million people worldwide are currently affected, with 1.6 million deaths reported each year [18]. T2D is often associated with obesity, accelerated aging, and inflammation [19]. In obese people, senescent cells accumulate in the visceral fat [20]. Interestingly, in the 3MR and INK-ATTAC mouse models, the administration of Ganciclovir or AP20187 or D + Q promoted clearance of senescent cells, improving the glucose tolerance [19]. Moreover, adipogenesis was promoted, suggesting that the elimination of senescent cells can be replaced by non-senescent and proliferating adipocyte progenitors that can then differentiate into insulin-responsive fat cells [19]. Regarding inflammation, it decreased after senolytics administration; in this condition, a reduced macrophage homing has been found compared to untreated mice [19], suggesting that senotherapeutic interventions might alleviate metabolic dysfunction.

Notably, accelerated aging of pancreatic islets, especially the β cell component, determines diabetes [20]. In the INK-ATTAC mouse model, the expression of SA-β-Gal, p16, SASPs, and inflammatory cytokines, such as CCL4 and IL6, is increased compared to normal mice [20]. The administration of Navitoclax determined a generalized functional improvement [20] associated with a significant decrease in the blood glucose level [20]. Consistently, in human samples of pancreatic islets obtained from T2D patients and healthy donors, a significant accumulation of the age-related biological marker was found in the T2D samples [20].

Interestingly, senescent β cells upregulated transcription of the anti-apoptotic molecules BCL-2, BCL-xL, BCL-w, resulting in the activation of a pro-survival pathway [21]. In this condition, a BH3-mimetic has been used to trigger apoptosis in senescent cells isolated from the islets of a T1D mouse model, reporting a beneficial effect on blood glycemia [21]. This effect has not been seen with other BCL-3-selective inhibitors such as Venetoclax or ABT-199. However, these compounds were still able to reduce senescent cells and inflammation [21].

In T2D, cardiovascular complications are typical findings [22]. In a study conducted on a diabetic rat model, Simvastatin, an HMG-CoA reductase inhibitor, reduced cardiac hypertrophy and hyperglycemia, preventing the deposition of collagen and fibrosis [23]. In CMs upon Simvastatin administration, the expression of NF-κB decreased with a global reduction of inflammation [23]. However, the senomodulator effect of Simvastatin has been demonstrated in breast cancer in which the drug inhibited the prenylation of proteins suppressing SASPs [24] and slowing tumor progression [24]. Despite the positive effect of Simvastatin in breast cancer, further studies are needed to understand whether this molecule has a role as a real senotherapeutic molecule in aging-related diseases.

The number of ongoing clinical trials in which synthesized small molecules or natural compounds have been used to induce senolysis in humans is growing, but the number of subjects involved is limited, and only a few results have been made yet available. The following is a summary of recent or ongoing clinical trials published on ClinicalTrials.gov focused on senolytics and their effect on older people with chronic pathological conditions.

Since May 2020, the effect of senolytic drugs is going to be tested in order to improve skeletal health in candidates more than 70 years old (ClinicalTrial identifier: NCT04313634).In detail, two groups of participants are going to be investigated: one group is treated with D + Qthe other group will receive only fisetin.

A new molecule, named UBX0101, is under the investigation of scientists to evaluate its effect on the degeneration of articular cartilage in knees (knee osteoarthritis) that is common in the elderly. In the long-term follow-up (12 weeks) of patients with painful knee osteoarthritis (ClinicalTrial identifier NCT04349956).

Fisetin is also under scrutiny in a study aimed to attenuate the consequences of osteoarthritis in knees (ClinicalTrial identifier NCT04210986). 20 mg/kg of Fisetin will be administrated orally for two consecutive days.