We provide an overview of the challenges and advancements in the development of therapeutic monoclonal antibodies and antibody products.

1 Sydney School of Pharmacy, Faculty of Medicine and Health, The University of Sydney

Since the first therapeutic monoclonal antibody (mAb) was approved by the USA Food and Drug Administration in 1986, full-length monoclonal antibodies have become and persistently remain the most dominant and significant class of biologics in the pharmaceutical industry due to their unmatched specificity and their ability to treat a variety of diseases including cancers, infections, autoimmune disorders and cardiovascular and neurological diseases (1-3).

In addition to the dominant full-length monoclonal antibodies, antibody (Ab) engineering technologies have progressed in recent years to produce highly optimized, strategically engineered biobetter therapies (4-6). Fragments of mAbs such as the crystallizable fragment (Fc), antigen binding fragment (Fab), and single-chain variable fragment (scFv) possess key functions including specificity to a biological target or immunological activation. The isolation of these fragments for fusion with other mAb fragments, biologically functional proteins, cytotoxic drugs, or drug carriers has been the main interest in developing the next generation of biobetter therapies such as antibody-drug-conjugates, nanoparticle-antibody complexes and bispecifics (5, 7-10). 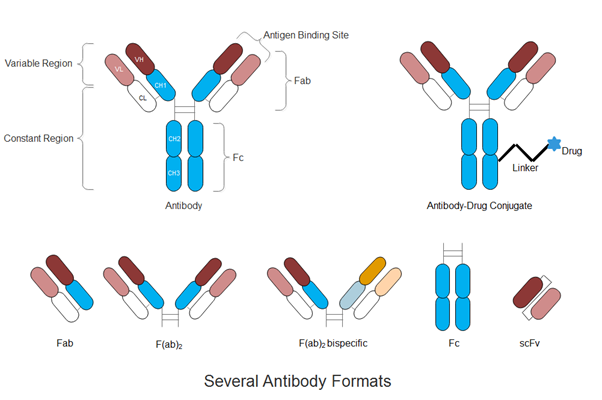 a) Challenges in Discovery

Full-length antibodies are large molecules comprising of more than 1000 amino acids forming four peptide chains (two heavy and two light-chains) that are bound together by interchain disulfide bonds and interchain non-covalent interactions. Due to their sizes, chemical synthesis is not feasible for production of such large proteins.

First-generation technologies for full-length mAb discovery required the immunization of animals, which resulted in the generation of highly specific antibody libraries of non-human origin that were potentially immunogenic and less effective in inducing an immune response as compared to wholly human mAbs (5, 7, 8). In addition, several studies have shown that some plant species such as tobacco can be used to express full-length mAbs; however, immunogenicity and lack of human glycosylation is still an issue that needs to be addressed in these systems (11-13).

b) Challenges in Production and Purification

A mammalian expression system is required to produce a full-length antibody since lower organisms do not have the necessary machinery for the production. Bacteria, for example do not have the tools for post-translational glycosylation, and only few bacteria species have the capacity form disulfide bonds, which are essential components of antibodies. Yeasts, on the other hand, can glycosylate but with high amount of mannose which can cause immunogenicity (5, 12).

Utilizing mammalian expression systems also has some pitfalls as it is considerably costly and inefficient, can have varied yields depending on the product and expression system, and requires additional downstream processing to purify and remove biological contaminants introduced from the expression system (5, 14, 15).

Another challenge with mAbs and Ab-based therapeutics is the limitation to lyophilised and liquid-based formulations for intravenous (IV) or subcutaneous (SC) delivery at high protein concentrations to achieve maximum bioavailability. Pulmonary delivery creates additional mechanical stress that contributes to instability of the mAb but more critically, systemic delivery of large proteins through respiratory system is quite limited, and oral delivery is unfeasible because of chemical and enzymatic degradation and limited absorption in the gastric and intestinal system (5, 16, 17). Therefore, mAbs and other Ab therapeutics are formulated as injectables and constituted using various stabilizing additives such as sugars, salts, surfactants and buffered to achieve a certain solution pH range.

Aggregation and instability are two other critical obstacles in antibody development. The aggregation profile of antibodies can be influenced by both external conditions such as temperature and purification procedure and intrinsic factors. Stability of antibodies can also be affected by other parameters such as amino acid composition and protein concentration. All these issues need to be addressed as they have a great impact on pharmaceutical properties including formulation, route of administration and biological half-life (18-21). Prediction of antibody degradation and in turn shelf-life calculation based on accelerated studies remains a challenge, nevertheless new methods are discussed to overcome this problem (22, 23). 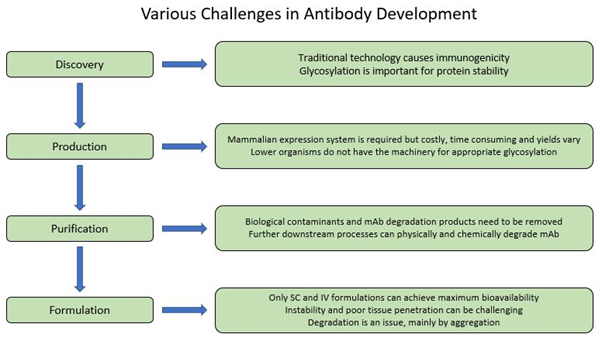 Utilizing immunized animals for full-length mAb discovery resulted in the generation of fully murine mAbs which can be immunogenic. Technologies arose to address immunogenicity, such as producing chimeric and humanized antibodies and developing transgenic mice with their murine antibody heavy and light chain genes replaced with equivalent human genes (5, 7, 8). Phage display technology; a method which involves the expression of proteins on the surface of phages to select desirable antibody variable domains based on their binding properties, is one of the commonest methods to produce fully human antibodies. The first approved human antibody, adalimumab, was discovered using phage display technology and it is the top selling pharmaceutical in the market with sales of nearly $20 billion in 2018 (1, 5, 24).

Significant variations in expression, yield, and quality of a mAb in hybridoma cell lines led to the development of high yielding mammalian expression systems, which utilize stable Chinese hamster ovary (CHO), mouse myeloma (NS0), and mouse hybridoma (Sp2/0) cell lines (5, 7). In the context of research and development, transient expression in human cell lines including embryonic kidney (HEK 293), amniotic (CAP), a hybrid of HEK 293 and lymphoma (HKB-11), and embryonic retina (PER.C6) are favoured over stable CHO expression due to the ease and speed of production of workable quantities of antibody for preliminary studies. Although these expression systems might become dominant in the future, CHO cell lines are still the most widely used expression system in the industry as they can easily grow in suspension culture and ensure reproducibility between different batches  (5, 7, 12, 25-27).

Another limitation of utilizing CHO expression systems is that, because of their different glycosylation profile, CHO-expressed mAbs may produce immunogenic non-human glycoform (Neu5Gc), and may have a higher composition of sialylation, which may result in reduced antibody-dependent cellular cytotoxicity (12, 25, 26). Approval of mAb Fc fusion therapeutics which are manufactured in HEK 293 expression system promotes the acceptance of human-based expression systems for the production of mAb-based therapeutics (7).

Although considered high risk due to potential endotoxin contamination in the product, lower organism expression platforms such as E. coli and P. pastoris continue to be the preferred option for the manufacture of fragment mAb formats owing to the relative ease, high yield, and reduced cost for manufacture as compared to mammalian expression platforms. The Fragment mAb formats produced in these systems are small in size and do not require glycosylation (5, 12, 28).

An emerging in vitro cell-free synthesis technology is being developed with bacterial and CHO cell lysates which has the potential to alleviate formation of undesirable biological byproducts, since the machinery from the cell lysates purely express protein from the mAb genes that are introduced to the system. Despite not being currently applicable for industrial scale manufacture, this technology holds much promise as an alternative to live culture (29-32).

Protein A-based affinity chromatography is the most robust, efficient, and prevalently used mAb purification technology not only because of its selectivity and high affinity towards Fc regions of various species, but also its efficient dissociation of captured mAbs at a low pH for reuse. Once mAb is captured, further polishing steps may be required to remove further contaminants including host cell proteins and DNA, as well as leached affinity chromatography ligand- and Ab-degradation products such as fragments, aggregates, and ionic variants. Ion Exchange Chromatography (IEC), Size Exclusion Chromatography (SEC) and Hydrophobic Interaction Chromatography (HIC) are the most widely used polishing methods (33, 34).

Strategies to improve the formulation of mAbs and Ab-based therapies continues to be an ongoing challenge, as is faced with all biotherapeutics. Despite the majority of currently approved mAb therapeutics being formulated for IV delivery, the interest in developing injectable formulations, primarily SC for systemic delivery, has increased owing to their advantages over IV delivery such as reduced burden to allied health services, patient tolerance, and adherence to treatment (35, 36). Nevertheless, certain mAb therapies are suitable, and others are not based on their solubility, viscosity, self-association, intrinsic stability, aggregation, and precipitation profiles. To address these issues; use of excipients, for instance, polysorbates, human hyaluronidase, amino acids, ionic liquids can be considered in the formulation; however, high concentrations of polysorbates can cause denaturation of proteins, and addition of human hyaluronidase can add burden to the viscosity of the formulation (5, 20, 37-41).

Delivery of the mAbs and Ab-products to the specific target tissue, for instance, tumors for cancer treatments, continues to be a challenge as penetration to tissue from blood vessels is poor, owing to mAbs’ polar surface charge and relatively large MW, limiting transport through physiological barriers(4, 6, 42). The enhancement of the affinity of mAbs to their biological target through strategic mutation technologies improved diffusion rates of mAb to target for increased efficacy. In the case of tumors, however, very high affinity can decrease diffusion due to the ``binding site barrier``. Increased affinity of mAbs results in enhanced internalization of mAbs and this mechanism is exploited through the development of high affinity antibody-drug conjugates (ADC) to target the delivery and release of potent drugs, inducing targeted cell death (42-45).

Fragment mAb platforms have shown a better tissue penetration and biodistribution than full-length antibodies; however, smaller peptides lacking an Fc region demonstrated highly reduced in vivo half-life and poor retention times. PEGylation is the primary strategy to address this issue, along with strategic Fc mutation and glycosylation engineering (21). Contrarily, relatively larger nanocarrier platforms have demonstrated superior pharmacokinetics and tumour retention, as well as enhanced stability and the sustained, controlled release of mAbs. Further to nanocarriers, additional formulation strategies developed for the controlled release of mAbs include hydrogels and crystalline antibodies, which have shown success as stable, injectable formulations for development (5, 10, 20, 43, 45, 46).

Antibodies have been the most successful biologic therapeutic for several years and with the advancements in the technology and increased research on developing biosimilars and new antibody formats, it is clear that antibodies and their formats will remain the most thriving class of biopharmaceuticals in the forthcoming years. By making use of the new advancements in antibody development including cell-free synthesis methods, fully humanized antibody development methods, utilizing novel excipients for better formulations and different routes of administration, it will be possible to produce different types of antibodies and formats with relative ease, higher yield and less immunogenicity concern. With the help of the discovery and increased production of different antibody formats such as bispecifics, nanoparticle-antibody complexes and ADCs, the possibility of targeting and treating a variety of diseases will be much higher than ever before.

We thank Dr Mouhamad Reslan for critical reading of the manuscript and providing comprehensive feedback.