Renewable waste-to-energy in Southeast Asia is a kind of renewable and alternative energy gained from waste resource that most Southeast Asian countries explore and utilize not only to minimize the waste crisis but also to meet the actual fossil-free high demand [2] but also to reduce greenhouse gas emissions and other environmental impacts from the energy sector [9] across the region.

As the world hurtles toward its urban future, the amount of municipal solid waste (MSW), one of the most important by-products of an urban lifestyle, is growing even faster than the rate of urbanization [1]. The amount of MSW generation of the cities around the world might increase from 1.3 billion tons per year to 2.2 by 2025, and waste generation rates might double over the next two decades in developing countries [1][2].

The East Asia and Pacific (EAP) region has a higher urban population than other regions, and it is projected to reach 1229 million in 2025, up from 777 million in 2012 (Figure 1). Despite the lower per capita waste generation rate in the region compared to the Organization for Economic Co-operation and Development (OECD) in 2012, it will be increased by 60% in 2025. Since the Southeast Asian countries (Brunei Darussalam, Cambodia, Indonesia, Laos PDR, Malaysia, Myanmar, Philippines, Singapore, Thailand, and Vietnam) belong to the East Asia and Pacific region, the annual urban population of these countries, as per the World Bank Report [1], is expected to grow considerably by 2025, hence increasing the amount of annual waste generation. However, only 30–70% of waste can be collected in most developing countries, including Myanmar, Laos PDR, and Cambodia, whereas developed countries have a 76–100% collection efficiency [1][3]. With accelerated urbanization, economic growth, and changing lifestyles [4], Southeast Asia’s urban population is projected to rise to nearly 400 million by 2030 [5]. Additionally, the growth of electricity demand is also prompting countries to more than double generation capacity by 2040 [5]. The projected rise of energy demand in Southeast Asia will have a considerable effect on CO2 emissions, which are projected to rise from 3.5% today to 5% by 2030 [6][7]. Figure 2 shows the access to electricity, per capita electricity consumption, and per capita CO2 emission in Southeast Asian countries. Per capita electricity consumption in the majority of the countries is below 2500 kWh per capita, and their per capita CO2 emissions are below 4500 kg. The average carbon emission in Southeast Asian countries has been increased by over 5% due to the fast economic growth in the region [8][9]. Though Singapore, Malaysia, Brunei Darussalam, and Thailand have already allowed 100% access to their electricity, other countries like Philippines and Vietnam are projecting to reach this 100% access by 2020 [9]. 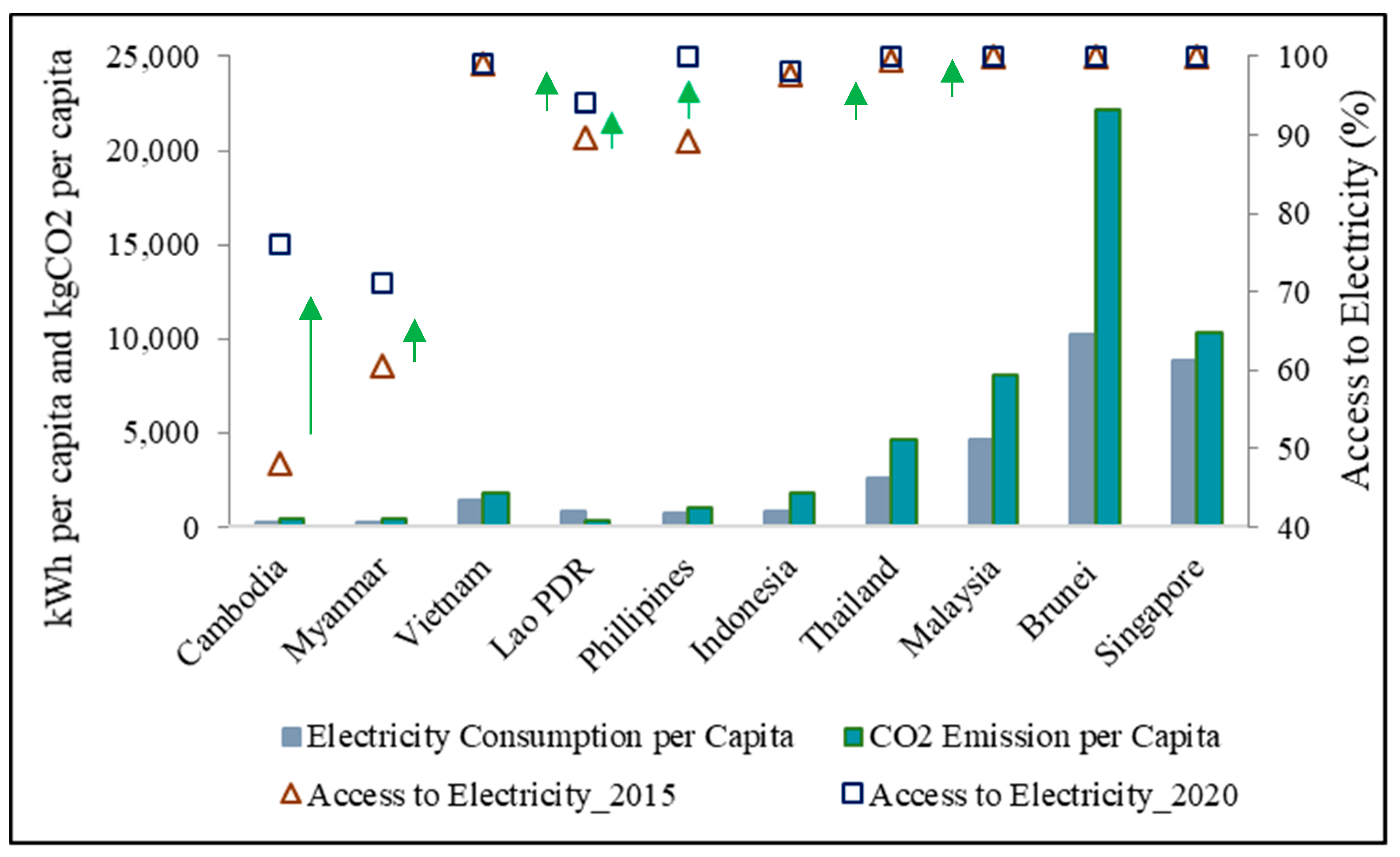 The total electricity generation from the renewables and non-renewables in the Southeast Asia region amounted to approximately 856 terawatt-hours (TWh) in 2014, out of which 20% came from renewable energy (74.1% hydropower, 12.6% biofuels, 11.5% geothermal, 1.2% solar photovoltaic (PV), and 0.6% wind) [10]. As shown in Figure 3, the bioenergy demand in non-OECD Asia is projected to grow dramatically by 2035. It has been observed that the demand for biofuels in this region will potentially rise from 2 million tons of oil equivalent (Mtoe) in 2009 to over 30 Mtoe in 2035, whereas the demand for biomass and waste might be increased by approximately 50% from 480 Mtoe in 1990 to over 700 Mtoe in 2035. 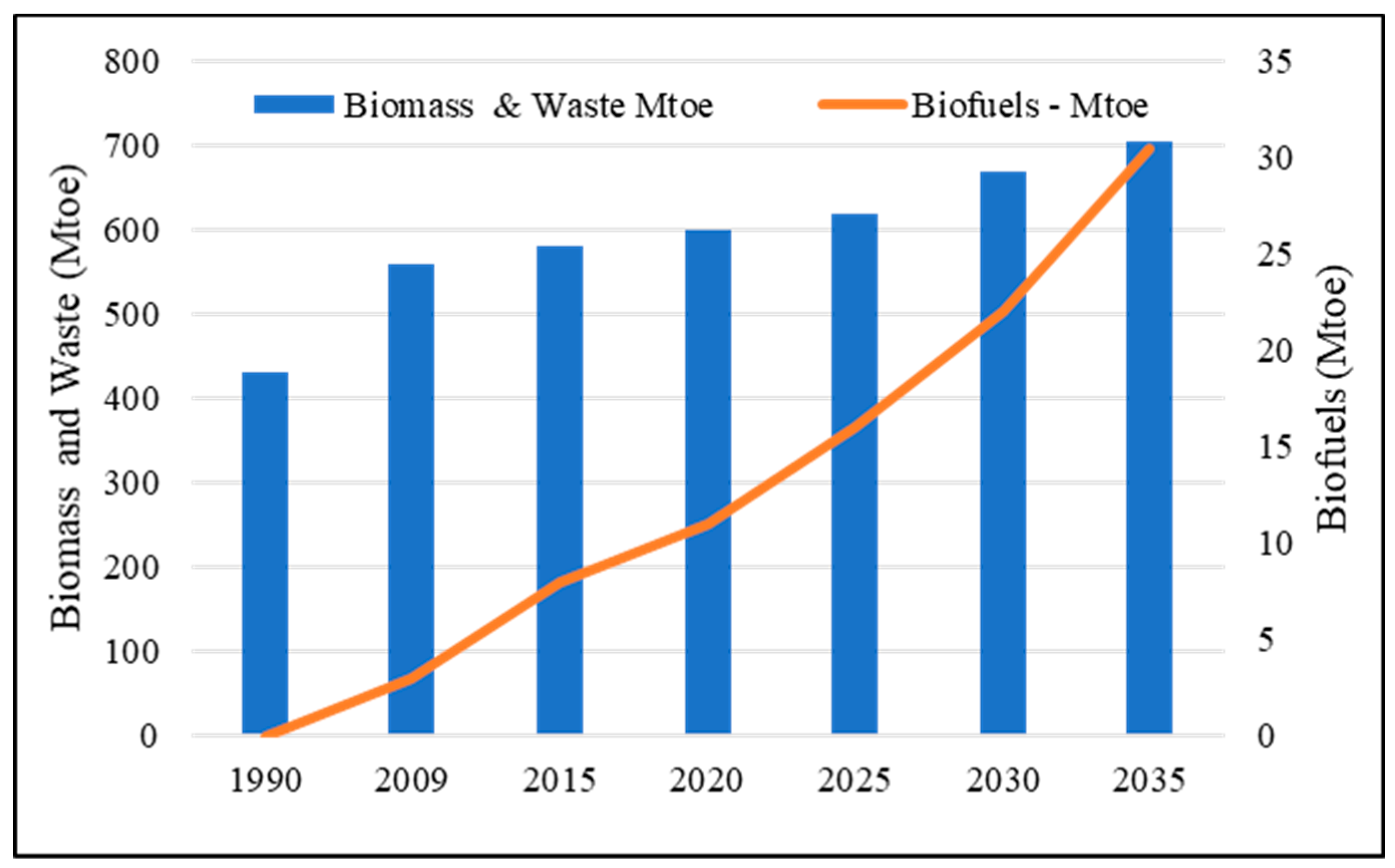 2. Waste to Energy in Asia

Due to the potential depletion of fossil fuel and climate change, Southeast Asian countries have looked to renewable and alternative energies to reduce greenhouse gas emissions and other environmental impacts from the energy sector [9]. On the other hand, the growing urban population will accelerate the amount of annual waste generation (approximately 97 million tons per year in 2015 to 165 million tons per year by 2025) in these countries [1][12], requiring significant investment in waste management to cope with the increase in waste [5]. The rapid urban population growth that has boosted waste generation and electricity demand has led to a possible alternative solution in Southeast Asia. Waste-to-energy—a catch-all for different technologies that allow countries to get rid of waste and generate electricity at the same time—is one obvious and quick solution to these two needs [5]. Therefore, the technologies constitute a meeting point for the waste management and energy sectors to work together and benefit from each other in the most efficient manner [2].

Actually, waste-to-energy is also a kind of biomass energy, offering benefits not only to minimize the waste crisis but also to meet the actual fossil-free high demand [2] and to reduce the greenhouse gas emissions and climate change impacts [13]. Nowadays, it has become a type of renewable energy utilization that can provide environmental and economic benefits in the world [13]. Currently, there are more than 2200 thermal waste treatment plants all over the world with a total capacity of 300 million tons per year, and it has been estimated that more than 600 new waste-to-energy facilities will be built with a capacity of 170 million tons per year by 2025 [2][14]. China had 7.3 gigawatts of energy production across 339 power plants in 2017, and they are expecting to grow to 10 gigawatts and 600 plants by 2020 [5]. The selection of the most suitable technology is based on social, economic, and technical factors, as well as environmental strategies to ensure the best outcomes [2]. In Europe, the most widespread options for upgrading waste treatment are the incineration of grey waste and anaerobic digestion (AD), often combined with the composting of the separated fraction of organic waste [3]. When it comes to waste-to-energy plants, there are regional preferences—gasification is in favor in South Asia, while grate incineration is generally used in Europe [3].

As described in Figure 4, the most common waste-to-energy technologies in the developing world include [2][15][16][17]; 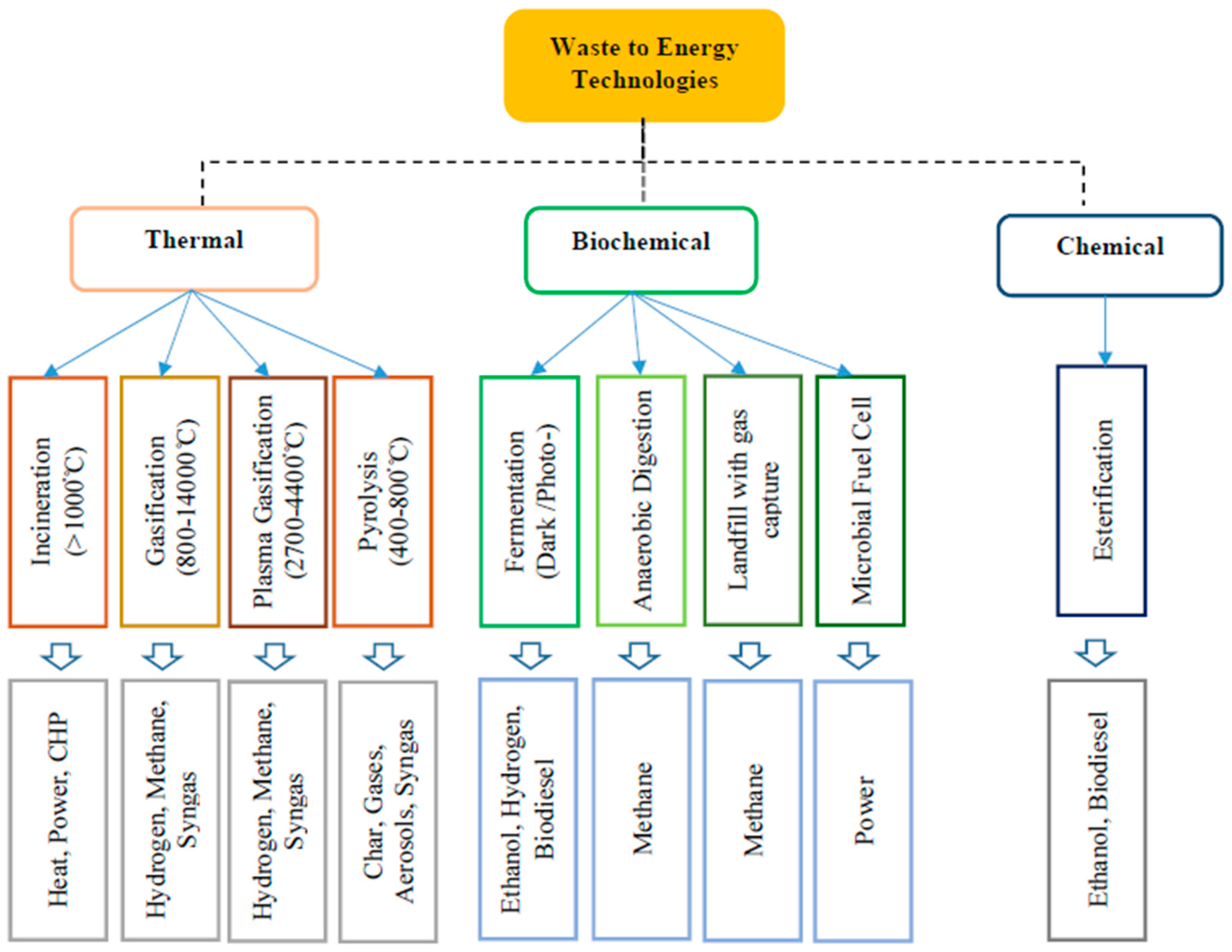 Technologies such as the incineration process have been advantageous, not only for reductions in the mass and volumes of initial waste but also for energy recovery and the reduction of land use for landfills [18]. When incinerated, waste can be reduced to 80–85% by weight and 95–96% by volume [19]. Additionally, incineration can be considered as a net greenhouse gas (GHG) reducer if GHG reductions, achieved by accounting for waste-to-energy, exceed GHG emissions [20]. 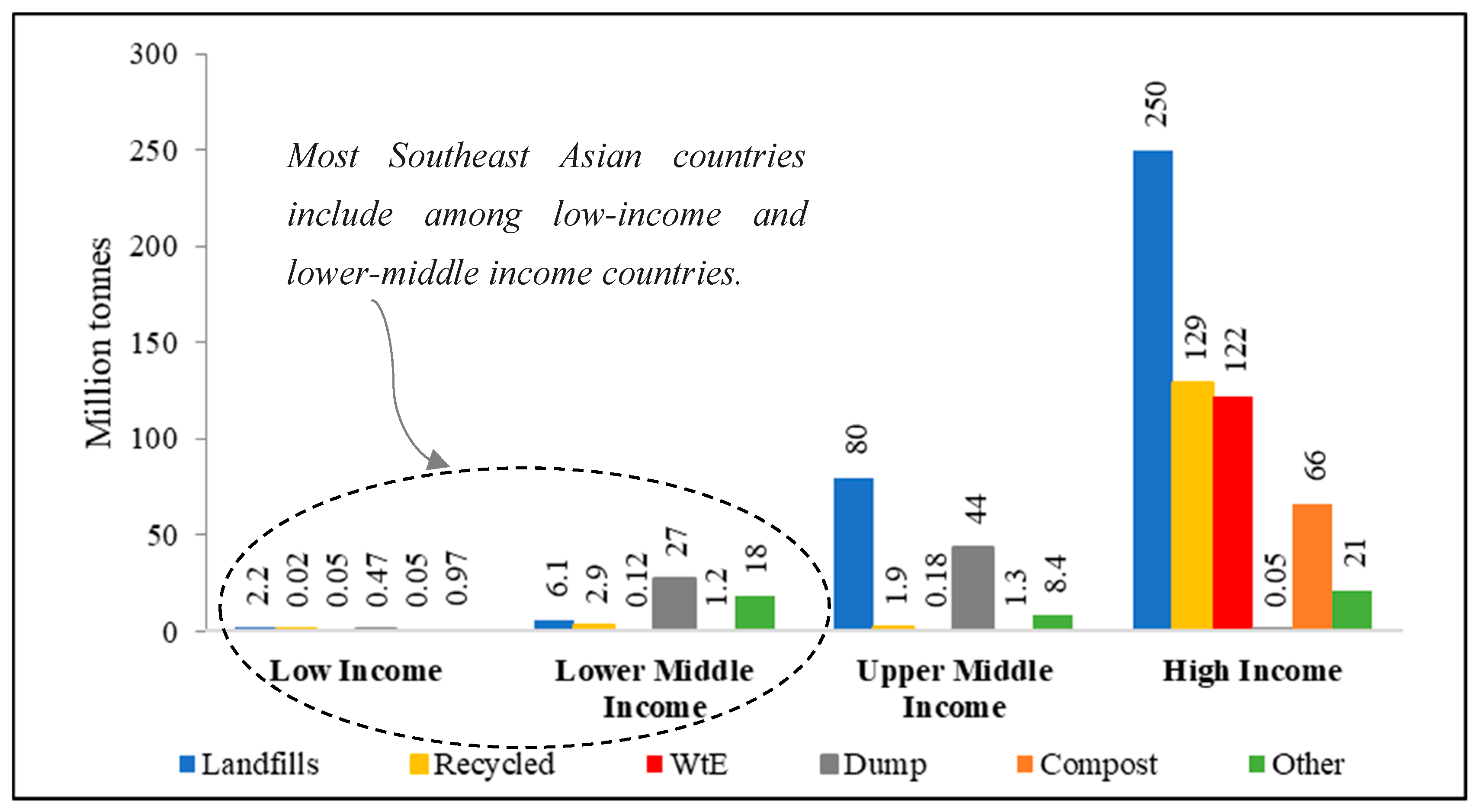 Figure 6. (a) Growth forecast of all waste-to-energy technologies globally (b) regional market for incineration [15][23]. Note: WtE: Waste to Energy.

Currently, waste incineration is uncommon in developing countries, and, generally, it is not successful or experiences financial and operational difficulties due to the high capital cost of the plant, operation and maintenance costs, the high moisture content of MSW, and the need for sorting facilities and pretreatment processes [1][18]. However, energy-oriented conversion technologies for waste-to-fuel and waste-to-energy have been well-developed around the world to create energy/fuel from waste, reduce dependency on fossil fuel, reduce land use for waste disposal, and ensure socio-economic and environmental benefits [24][25][26]. Though there is still a long way until a global sustainable waste management strategy is achieved [15], developing countries can learn the lessons about and gain technology transfers from the waste-to-energy technologies and waste management practices in developed countries.

Nowadays, most Southeast Asian countries are facing several issues related to waste management, such as the increasing annual waste generation that has required more waste disposal sites, the scarcity of land areas, environmental pollution, and growth in energy demand [4][5][7][27]. Since these issues are especially important to be tackled in Southeast Asia, waste-to-energy technologies can play an essential role in sustainable waste management and the relief of environmental matters [17][25][26]. Meanwhile, some aspects such as regulation, finance, and technological suitability should be carefully considered to develop the waste-to-energy sector in the region [2][12][15][16][18][24].